Copyright © 2020 Bao Zhang, et al. This is an open access article distributed under the Creative Commons Attribution License, which permits unrestricted use, distribution, and reproduction in any medium, provided the original work is properly cited.

In order to predict the fatigue life of frame, a new bench test method of the frame torsion fatigue is proposed, which can approximately reflect the results of enhanced road test. The frame finite element model was established and the simulation was carried out to determine the dangerous position of fatigue life failure. The load spectrum of the fatigue dangerous position was collected, and the fatigue damage value was analyzed by the rain-flow counting method and Miner criterion. The equivalent conversion relationship of the fatigue life between bench test and road test was established. The mean error between theoretical calculation result and bench test result is 5.2 %; The mean error between theoretical calculation result and road test result is 3.85 %. The results showed that the bench test method of frame torsion fatigue can improve the precision and reliability of the frame fatigue life prediction. 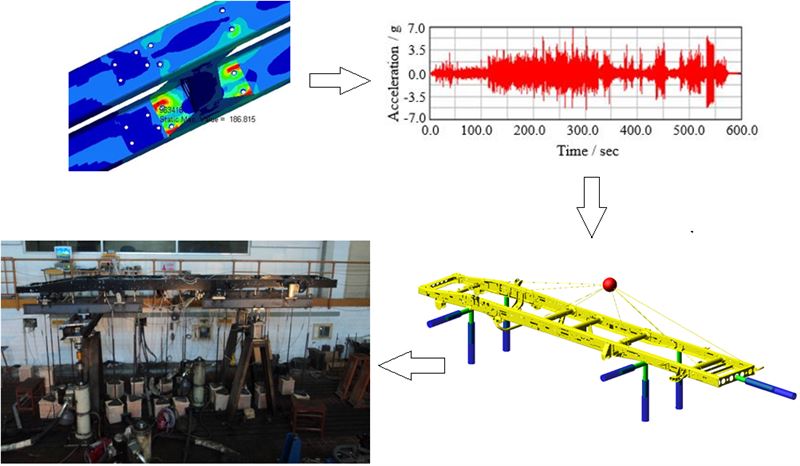 The frame is the base body of the vehicle, and the fatigue life is an important index of the frame design. In order to verify whether the frame meets the fatigue life requirements, it is necessary to perform bench fatigue test and enhanced road fatigue test. The frame bench test can eliminate the influence of climate environment, human interference, vehicle conditions and other factors, and the bench test has strong controllability and good consistency of test data, but the reasonableness of the fatigue bench test method will directly affect the prediction results of the frame fatigue life. Road fatigue test can objectively reflect frame failure; however the road test period is long, costly, difficult, and the test site and test conditions are demanding. Therefore, it is necessary to carry out research on the bench test method of the frame fatigue.

The frame bench fatigue test has not yet formed a unified method and standard, most bench experiments are made by auto companies, and the methods and evaluation standards vary greatly [1]. The loading methods of the frame bench fatigue test is mainly included equal-amplitude cyclic load and road simulation load. The equal-amplitude cyclic load is an alternating load with the same amplitude and constant frequency applied to the frame, this loading method is simple, versatile and has many applications. The fatigue test method and fatigue life prediction of the frame under constant amplitude loading were introduced in reference [2]. Load controlled uniaxial, pure torsion, constant and variable amplitude tension–torsion tests on aluminum alloy tubular specimens were conducted in reference [3]. The prediction methods of frame fatigue life include numerical analysis method, bench test method and road method. In reference [4], the fatigue analysis method based on the combination of simulation, bench test and road test were introduced, and the excitation of bench test was road random load spectrum. In reference [5], the low cycle fatigue life prediction model of the bolted connections was established, and the experimental study and numerical analysis were carried out to predict the life distribution. The loads on the frame include longitudinal load, bending load, lateral load and torsional load, etc., and the dynamic torsional load is the main load form that causes fatigue damage to the frame [6]. Therefore, the article focuses on the analysis of the bench test method of the frame torsional fatigue.

Firstly, the frame model was created, and the frame dangerous position of the fatigue failure was determined through simulation analysis. Secondly, the load spectrum of the frame dangerous position was collected on the bench and the enhanced road respectively. Thirdly, the load spectrum was analyzed and processed by the Principles of rain flow counting [7]. The frame fatigue damage values under the bench test and road test conditions were calculated by using the Miner linear cumulative damage criterion. Finally, the bench test method of the frame torsional fatigue was developed, and the equivalent conversion relationship between bench fatigue life and road fatigue life was established.

The material of the frame is B510L, the yield limit is 355 MPa, the elastic modulus is 2.1e5 MPa, the Poisson’s ratio is 0.3, and the density is 7900 kg/m3. The models of parts, assemblies, and subsystems are established, and the vehicle finite element model is shown in Fig. 1. 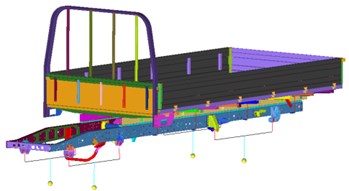 When the vehicle is driving on uneven roads, the four wheels are not at the same height, which causes torsional deformation of the frame and bears the torsional load. When calculating the frame strength under torsion conditions, it is necessary to constrain the translational degrees of the freedom in the , and directions of the front axle center, as well as the and translational degrees of freedom at the installation points of the rear leaf springs [8, 9]. And a forced displacement of 50 mm vertically upwards is applied to the center of the left front wheel in order to produce 2° torsional deformation of the frame.

According to the design requirements, the torsional strength analysis condition of the frame is that the torsion angle of the front axle relative to the rear axle is 2 degrees, and the maximum stress of the frame dangerous point is checked. The maximum stress of the frame is shown in Fig. 2, and the dangerous position of torsional fatigue failure appeared on the left side rail of the frame above the rear axle. In the bench test and road test, the strain gauge is attached to the place where the stress is the largest as shown in Fig. 2, the load spectrum is collected, and the fatigue life analysis is performed.

Fig. 2. A diagram of the frame stress cloud 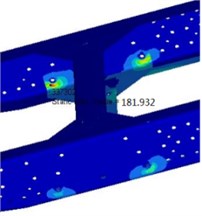 3.1. Analysis of the frame torsion deformation

In order to analyze the torsional deformation of the frame under road test conditions, it is necessary to collect the acceleration on the frame above the front and rear axles. The acceleration signal is converted into displacement signal by Fourier transform, and the displacement signal is used to drive the multi-body dynamic model of the frame, and the relationship curve between torsion angle and time is obtained through calculation [10]. The LMS test Lab software, the LMS data collector and the PCB accelerometers are used to collect the acceleration signals at the four positions on the left and right sides of the frame above the front and rear axles. The measuring points on left side of frame are shown in Fig. 3 and the collected acceleration signals are shown in Fig. 4.

a) The front measuring point

b) The rear measuring point

a) The front point acceleration of the frame

b) The rear point acceleration of the frame

The multi-body dynamic model of the frame is established by using Adams software, as shown in Fig. 5. The direction movement of the two points on the left side is restricted, the direction movement of the rear end of the frame is restricted. The acceleration signal is transformed into displacement signal, and the frame dynamic model is driven by the direction displacement signal of the four points. A plane is composed by the left front point, the left rear point and the right rear point. Through simulation, the torsion angle of the right front point relative to the plane can be extracted.

In order to analyze the stress level of the fatigue failure dangerous position and predict the fatigue life of the frame, it is necessary to collect the strain signal of the dangerous position under road test conditions. After the simulation analysis of the frame, it is determined that the position of the left side rail above the rear axle and the weld on the left end of the third beam are the most likely to fatigue failure. The strain signals of the two positions are collected and processed by the resistance strain gauge sensor and the LMS data acquisition and processing system. The test photo of the frame longitudinal beam is shown in Fig. 7 and the load spectrum is shown in Fig. 8.

The load spectrum needs to be processed before the equivalent damage calculation of the frame, such as eliminating burrs, drift, etc. Then the load spectrum time domain signal is converted into a rain flow matrix by the rain flow counting method to obtain the number of strain cycles [11]. After driving for 1 lap in the test field, the rain flow matrix at the test position of the frame is shown in Fig. 9. The average stress is 130 MPa, and the stress range is 46-280 MPa. 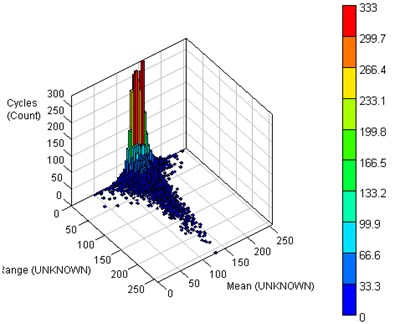 4. Design and verification of the bench test method

The I-beams replace the front and rear leaf springs, and are connected to the frame with lugs, bushes and axle pins. The three translational degrees of freedom at the center of the front right I-beam are constrained, the and direction translational degrees of freedom at the centers of the rear I-beams are constrained. The vertical upward load is applied to the center of the left front I-beam. The torsional deformation of the frame appeared under the action of the loader, the loading frequency is 1.4 Hz, and the experimental picture is shown in Fig. 10.

Fig. 10. A diagram of the fatigue bench test

Fig. 11. The frame rail of the bench test result 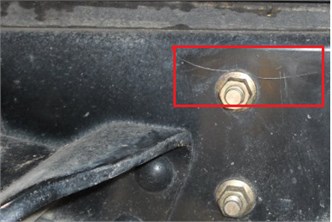 Fig. 12. The weld of the bench test result

Fig. 13. The frame rail of the road test result 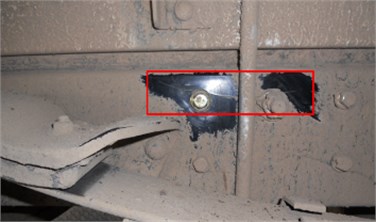 Fig. 14. The weld of the road test result

The authors would like to acknowledge the support of Xiaoping Su professor for providing the materials and apparatus to carry out the experimental works.