Copyright © 2020 Peicheng Shi, et al. This is an open access article distributed under the Creative Commons Attribution License, which permits unrestricted use, distribution, and reproduction in any medium, provided the original work is properly cited. 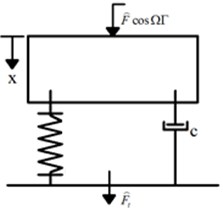 It can be seen from Eq. (1) that the quasi-zero stiffness system is a duffing system that lacks linear terms.

Harmonic balance method is used to solve motion equation of the nonlinear system. Let the solution of Eq. (1) be , ignore its higher harmonic terms, eliminate the phase , and substitute the solution into the motion Eq. (1) to obtain the amplitude-frequency characteristic equation of the system:

Vibration isolation of the system generally takes transmissibility as the evaluation standard. Let the force transmitted to the foundation through the system be:

By harmonic balance method, the amplitude of the force transmitted to the foundation is solved: 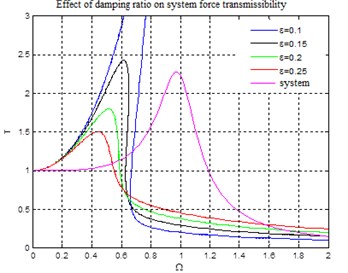 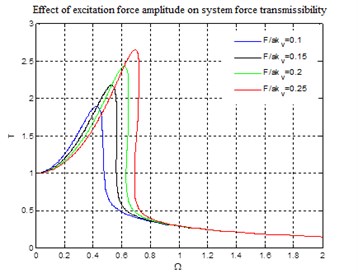