A sensor fault diagnosis method based on KPCA and contribution graph

Copyright © 2020 Yuanqing Wang, et al. This is an open access article distributed under the Creative Commons Attribution License, which permits unrestricted use, distribution, and reproduction in any medium, provided the original work is properly cited.

In this paper, a sensor fault diagnosis method based on KPCA and contribution graph are proposed to adapt to the nonlinear and non-Gaussian characteristics of the system. Based on the kernel function theory, this method uses SPE and T2 statistics for fault detection and contribution graph for fault location, thus completing fault diagnosis. The numerical simulation results verify that the proposed method is more effective than the traditional PCA method in detecting nonlinear faults. At the same time, the KPCA contribution map can be used to accurately locate the fault sensor, which can provide a reference value for the sensor fault diagnosis of nonlinear systems in the future. 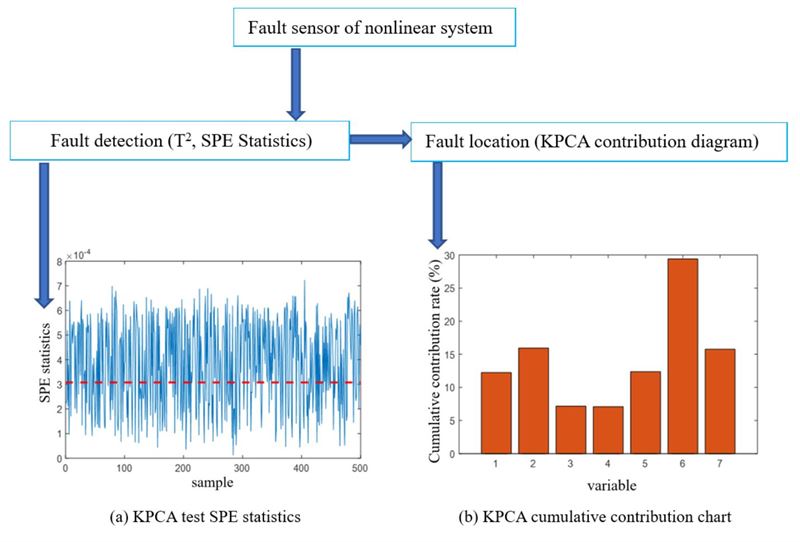 The bridge health monitoring system can more comprehensively grasp the stress and damage evolution laws of the whole process of bridge structure construction and service and is one of the effective means to ensure the safety of the construction and service of large bridges [1]. At present, the three most common methods for sensor fault diagnosis are based on the analytical model, signal processing, and knowledge experience [2].

The multivariate statistical analysis method is a multivariate statistical process control method based on signal processing, which has been widely used in process performance monitoring and fault diagnosis [3]. The PCA (Principal Component Analysis) method is one of the most typical linear fault diagnosis methods [4]. However, the diagnostic performance is greatly reduced when it is applied to a non-linear system [5].

This paper proposes a new nonlinear diagnosis method based on the kernel principal component analysis (KPCA) and contribution graph. The KPCA method puts the measured data into a high-dimensional space through kernel function. In the high-dimensional space, the principal component is calculated by linear PCA method, and SPE statistics are constructed to detect whether the fault occurs or not, and then the contribution graph is drawn to locate the faulty sensor. Finally, numerical simulations are used to verify the superiority of the proposed KPCA combined with the contribution graph method in nonlinear sensor fault diagnosis than the traditional PCA method.

2. Sensor fault diagnosis method based on KPCA and contribution graph

1) Obtain a new data set from sampling and normalize the data set using the mean and variance of the training samples in the normal state.

2) Use the kernel function to calculate the kernel matrix for the set of test data collected online;

3) Calculate to centralize the kernel matrix to get ;

4) Calculate the eigenvalue and eigenvector of , and normalize the obtained feature vector;

6) Calculate the and SPE statistics of the measurement data to determine whether it exceeds and in the normal state. If it exceeds, there is a fault.

When the system fault is detected, it is necessary to analyze the cause of the fault, find out and separate the fault sensor, to ensure the normal operation of the system [5].

In the traditional PCA method, there is a certain linear relationship between the sensor and the fault monitoring amount, so it is easy to calculate the sensor contribution to draw the contribution graph, while in KPCA, the implicit nonlinear transformation function is used to transform the input space, so it is difficult to obtain the inverse mapping function from high-dimensional feature space to original space; at the same time, KPCA does not provide the corresponding relationship between the fault monitoring amount and the sensor. Therefore, the contribution graph method cannot be directly applied to the fault recognition in the KPCA model. However, by analyzing the nonlinear transformation process of the KPCA method, we can find that there is still a certain relationship between the sensor and the monitoring quantity composed of nonlinear principal component, that is, the correlation between the faulty sensor and the nonlinear principal component is large, while the correlation between the sensor in the normal state and the non-linear principal element is small [4, 5]. Therefore, the contribution of the KPCA method can be calculated according to Eq. (1):

The mean-square contribution vector is shown in Eqs. (2-3):

Therefore, the mean square contribution rate of the -th sensor can be expressed as:

When a total of sets of test data were collected during the period during which the fault occurred, the cumulative mean square contribution rate of the -th sensor was defined as:

After the above calculations, the sensor with the largest cumulative mean square contribution rate to the fault is the faulty sensor [4].

Among them, is Gaussian noise independent of each other, and all follow the normal distribution with a mean value of 0, and the variance is , ; follows the uniform distribution in the interval [–1.5, 1.5]. Besides, there is a nonlinear relationship between and , and , , and . Suppose the system generates n sets of samples, then it forms a matrix ,.

Two types of sensor failures are analyzed below: (1) deviation failures that affect the average value; (2) gain failures that affect variance. Then three sets of 500 data test samples are generated. Among them, the first group of samples is the normal state inspection sample, which is used for the inspection under the normal state; the second group of samples is the fault 1 test sample, which is specially used to test the deviation fault, and the fixed deviation fault occurs in the manual setting sensor and the deviation amplitude is 0.5. The fault data is set according to Eq. (7):

The third group of samples is the fault 2 test sample, which is specially used to test the gain fault, and the sensor is set to have a constant gain fault, the gain amplitude is 1.5. The fault data is set according to Eq. (8): 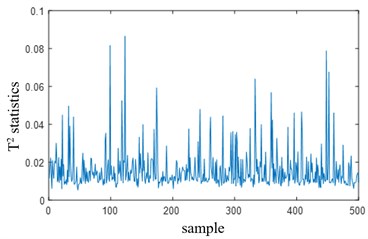 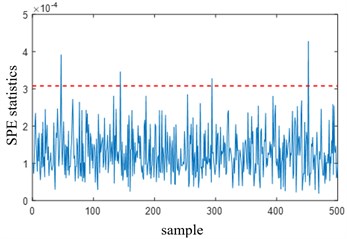 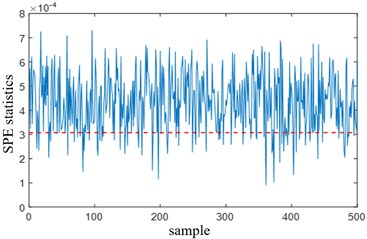 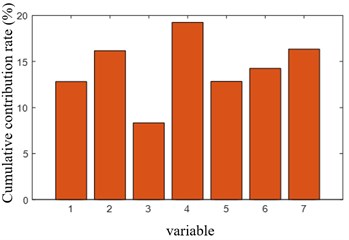 PCA and KPCA methods are used to diagnose 2 samples. PCA test results show that the overrun rates of and SPE statistics are 3.6 % and 0.8 % respectively; KPCA test results are shown in Fig. 3(a), in which the overrun rate of SPE statistics is 62.4 %, which is far greater than that of PCA, which also indicates that the ability of KPCA to detect nonlinear sensor fault 2 is far better than PCA. Then, the contribution graph based on KPCA in Fig. 3(b) shows that the fault sensor with the largest cumulative contribution rate is the fault sensor introduced artificially before, indicating that the location is accurate. 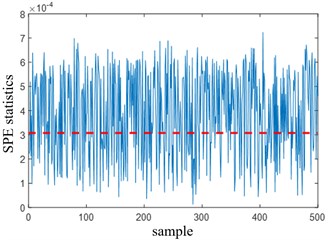 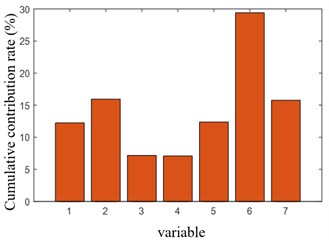 This research was funded by the Natural Science Foundation of Chongqing, China, Grant No. cstc2018jscx-msyb1299.