Copyright © 2021 César A. Morales. This is an open access article distributed under the Creative Commons Attribution License, which permits unrestricted use, distribution, and reproduction in any medium, provided the original work is properly cited.

Power spectral density of horizontal ground displacement of large and recent events in earthquake-prone Latin America is analyzed. The results confirm -in a larger region of the world- that strong motion horizontal displacement is a narrowband process, which was previously demonstrated solely on a very limited area: the State of California. Nonetheless, those limited and previous results proved to be important in seismic base isolation; particularly, in the solution of the problem of large displacements at the structure base. This is a current problem for which more expensive techniques than passive control are presently being implemented, as active or hybrid control; therefore, it is emphasized that a solution exists within simple base isolation, and it is based on ground displacement narrowbandness.

Records of ground seismic displacement have not attracted much awareness because in dynamic analysis of conventional fixed structures, or the vast majority of buildings, ground acceleration records are the important signals [1-3]. However, in dynamics of base-isolated structures, ground displacement can be a more important seismic record than the acceleration one [4-7].

Now, this solution of the LBD problem was based on an important hypothesis regarding the modeling of the seismic input. This hypothesis in turn was based on a frequency-domain characterization of actual strong motion ground displacement, which was established through the analysis of the power spectral density (PSD) of displacement records of four (4) large California earthquakes (moment magnitude above 7.0) [4]. Subsequent research or broader results were necessary in the context of Northern America, and next ten (10) California strong-motion events were analyzed [16]; these later spectral results corroborated the previous and limited-in-number ones; nevertheless, there is still the geographic limitation, or the fact that the earthquakes analyzed were confined or associated solely to the Californian section of the Pacific and North American plates boundary. Thus, results on a broader region of the lithosphere are still necessary.

In this work, broader results are presented, which are from strong motion events associated with the Nazca, South American, Cocos, Caribbean, North American and Pacific plates; that is, the spectral content of ground displacement of 8 very large Latin American earthquakes is studied (2 events with magnitude above 8); more exactly, the PSD of the critical horizontal-component record of the closest station to epicenter is analyzed. The results would let us state –on a much wider geographical base– that horizontal ground displacement is a narrow-band process. One important point and also an enhancement relative to previous research, is that seismic stations in this larger region of the world are newer or have broad-band sensors; therefore, concerns on the low and high frequency noise levels associated with seismic records are reduced, and this point is discussed in the last Section.

The narrow-band main result shall be important by itself, but apart from scientific importance, the results will also corroborate that the engineering problem of large base displacements in isolated structures can be solved [4] within simple passive control. More expensive and complex solutions to the LBD problem or the displacement demand in isolated buildings are presently being proposed: active control [6, 17], semiactive control [18], hybrid control with mangnetorheological dampers [19], tuned mass dampers [12, 20] and the inerter or gyromass [21]. In addition, it is pointed out that the study of seismic ground displacement is important also in engineering of submerged tunnels, pipelines and long-span structures [22, 23]. Finally, it is also noted that the suggested solution of the LBD problem is based on a linear model of the isolation system; nonetheless, there are nonlinear models [24] which require advanced numerical methods for the structural response [25].

2. Method and analysis of seismic base isolation application

The procedure to obtain the main results of this investigation are presented first, which are broader ground displacement power spectral density results; secondly, the extension of their application to mitigating the relative base displacement in isolated structures is explained; this motion is actually the isolator deformation or displacement, which is important in the engineering and construction of real isolation systems.

Eight very large and very recent Latin American events are shown in Table 1; a quarter of which with a moment magnitude above 8.0, and all occurred in this decade. The fact that the earliest or oldest earthquake is just from 10 years ago would not in general imply much regarding the issue of noise in seismic records, but in Latin America the difference is in that most active sensors are newer; thus, the low-frequency noise problem is limited, as it will be discussed later on. The table includes the name of the closest-to-epicenter station in each case, which were also the chosen stations in the previous work [16]; moreover, from the usual two horizontal-component records provided by each instrument, the one with the largest peak displacement is selected in the study.

The power spectral density (PSD) function of the selected displacement signals are obtained by means of a periodogram technique which is a nonparametric method to estimate spectral density. All 8 signals are corrected records and available in this form in public seismic databases, as strongmotioncenter.org by the USGS. Formally, the plots are estimates of periodogram PSD of samples of ground displacement after regarding the underlying stochastic process as wide-sense stationary; a rectangular window has been used in all cases to alleviate the leakage phenomenon.

2.2. Extension of the applications to reduce isolator displacement

As previously indicated, one application of the initial PSD results was in the reduction of the absolute base displacement in isolated structures; in fact, the mitigation was successful or to well under ground displacement levels [4]. Nonetheless, the physical design and construction of an isolation system is more concerned with the relative displacement than with the absolute one; this is mainly because the width of the moat and the flexibility of service connections depend on that isolator displacement (displacement demand) which is established by the dynamic design of the system or by seismic codes.

This relative displacement problem is a current issue in Earthquake Engineering; in fact and as explained previously, more complex and expensive solutions to this LBD problem have recently been proposed [17-21]; thus, the spectral content of seismic ground displacement should be revisited; moreover, the narrow-band results must be confirmed in larger regions of the world, and as importantly, the aim or application must be on the control of relative base displacement this time around.

where is the frequency ratio and damping factor.

As it is proposed herein, the optimization of can or must be the basis of a design procedure of base-isolation systems when the relative LBD problem is a concern, or its control is an objective, in the full design process of isolated structures. Now, the idea is based on the seismic input being narrow band, which is validated in this paper, and the methodology will be similar to the one published previously to solve the absolute LBD problem [4]. All this is currently the subject of further research work, and we emphasize that the proposal or idea of making use of relative transmissibility is original. Two additional comments or annotations, the proposal will be valid under both, near-field and far-field conditions, and the displacement demand problem in the isolation technique is not exclusive of civil buildings; structures as electric substation transformers and nuclear power plants do have the same issue under seismic load [28, 29], which can further expand the applications of the spectral results presented.

The PSD function of the selected strong-motion displacement signals is shown in Fig. 2; it includes the corresponding horizontal component or angular information. These results confirm the narrow-band characteristic previously noticed in the works by Morales [4, 16]; note that the plot range 0-1.5 Hz is already a very slender spectral range. As in the previous works, the narrow band is similar in all cases, except for the Maule event which is justified later; in other words, the energy below 0.025 Hz is close to zero, the peak value is between 0.05 and 0.18 Hz, and above 0.40 Hz the spectral content is negligible; the 0.025 Hz frequency is marked by the vertical dashed line, in all PSDF figures. In addition, the mean value of the peak-power frequency is 0.10 Hz, which is below but close to the 0.13 of the previous two works [4, 16].

A discussion is in order regarding the problem of low frequency, or long period, noise levels associated with strong motion records [30] because this can be severe for frequencies below 0.1 Hz. However, in this regard this work also presents an enhancement relative to previous spectral results: most seismic stations in Latin America are newer or these have broad-band sensors; therefore, the low-frequency noise problem is very limited. This can be proven, the low-cut frequency in the processing of all records is between 0.02 and 0.06 Hz (mean value equal to 0.03 Hz) which is below the frequencies in which we are observing rich spectral content; in other words, it was assumed in the processing or by the analysts, that the signal-to-noise ratio was, in general, problematic for frequencies below 0.03 Hz, or periods above 30 s. As an example, most important records of the 1995 Northridge event (California) had a low processed frequency of 0.1 Hz.

The Maule at Constitución PSD is distinct because liquefaction was widespread on the rupture zone; in particular, several types of liquefaction occurred in the small city of Constitución [31]. It is important to note that the same type of spectral content was noticed in a site of the previous work that also suffered liquefaction; that is, peaks in the PSD functions around 0.3 Hz rather than around 0.1 Hz, which is the case in a normal or most of the records analyzed [16]. 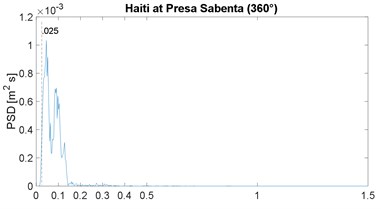 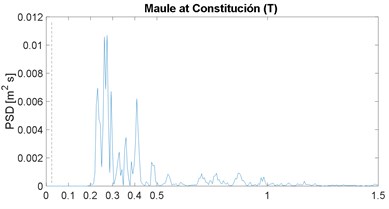 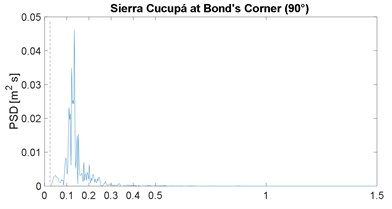 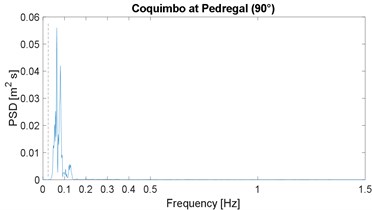 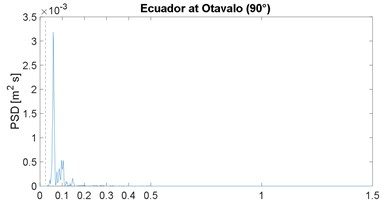 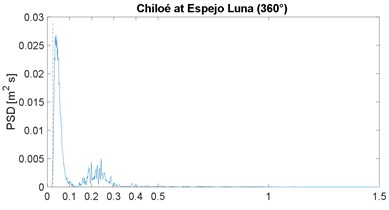 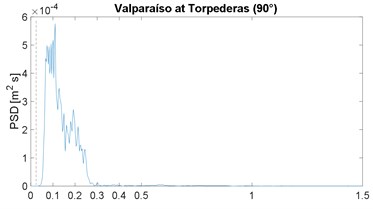 Strong-motion records on a much broader area of the lithosphere have been analyzed. It can be concluded or it is confirmed that horizontal ground displacement is practically a narrow-band process; this is based on the analysis of 8 very large earthquakes (2 events with magnitude above 8) in the vast Latin American region. These results corroborate previous ones, and that the absolute LBD problem in isolated structures can be solved by vibrations analysis in the frequency domain.

Moreover, a proposal has been presented to extend the application of the further and broader results to control the isolator displacement or deformation, which from an engineering or construction point of view, is more important than the control of the absolute base displacement; this is because the relative displacement is the one having direct impact on the seismic gap or the unusable and costly space between structure and moat walls, and on the expense of flexible utility connections and size of the isolators. This is a present-day problem for which more expensive techniques than simple base isolation are being implemented, as active and hybrid control, and also complex inertial additions as tuned mass dampers and inerters.

The lowest frequency of the band for this set can be established as 0.025 Hz; it had previously been set as 0.049 Hz for strong-motion records in a limited region or the State of California, USA; this difference or presence of lower dominant frequencies in some events is the result of geological diversity, which in a whole continent is richer than in a single state of a country.