Copyright © 2020 Yunkai Gao, et al. This is an open access article distributed under the Creative Commons Attribution License, which permits unrestricted use, distribution, and reproduction in any medium, provided the original work is properly cited. 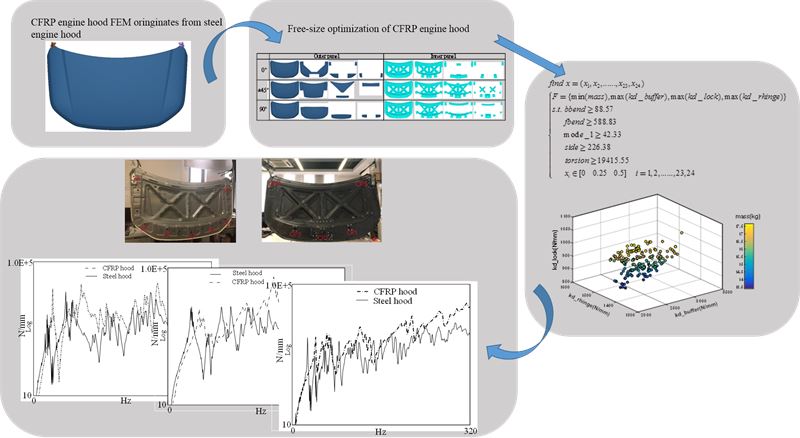 Automotive lightweight is mainly achieved through new lightweight materials, structural optimization design, and advanced material manufacturing methods [1]. As a new lightweight material, carbon fiber reinforced plastic (CFRP) has many advantages, and it is widely used in automotive body structures [2]. Guo et al. [3] used the principle of equal stiffness substitution to replace the material of the steel engine hood with CFRP, and compared the mechanical properties with each other. The results indicated that the CFRP engine hood has improved its mechanical properties (e.g., stiffness), and the mass was reduced by 46 %. Birk et al. [4] designed and developed vehicle body panels using CFRP for an electric vehicle, achieving a weight reduction of more than 20 %. Duan et al. [5] carried out multi-objective optimization for crash-worthy composite materials, which greatly improved the specific energy absorption of the structure and reduced the structure’s peak load of the structure while reducing the structural mass.

This paper applies CFRP to the engine hood, and takes the thickness of the inner and outer panels of the engine hood as the design variable. In addition to mass, the dynamic stiffness of the CFRP engine hood is used as the optimization objective for multi-objective optimization. The optimal Latin hypercube design (Opt-LHD) method is used to establish the sample space, the response surface model method and the Kriging model method are used to establish the surrogate model. The genetic algorithm is used for lightweight design. The optimized CFRP hood is trial-produced, and dynamic stiffness tests and modal tests are carried out. 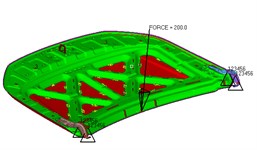 b) Back point bending condition 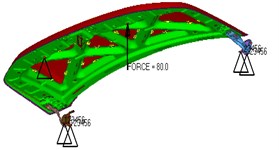 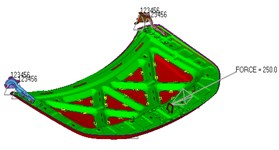 The simulation results of the original steel engine hood are shown in Table 1. The static parameters of the steel engine hood will be used as the constraint index for the subsequent multi-objective optimization.

The inner and outer panels of the engine hood can be simplified into four hyper-laminate composite laminates. To avoid the warpage and deformation of the trial-produced hood, it is required that the thickness and quantity of the CFRP laminates at the two orientations of 45°/-45° of the inner and outer panels are equal. The commercial software solver optistruct is used for free-size optimization.

Fig. 4. The stacking form of the outer panel and inner panel after sorted out

In the previous section, 24 kinds of stacking forms were obtained under the four-ply orientations of the inner and outer panels of the engine hood. And the thickness of these 24 stacking forms was used as design variable. The value of the thickness variable is set to a multiple of 0.25, which is the current minimum thickness of CFRP material that can be manufactured. If the ply thickness of a specific stacking form is 0, it means that this sub ply can be removed from the structure. At the same time, to reduce the interlayer stress, it is required that the number of adjacent layers with the same ply orientation should not be higher than two. Thus, the level of each thickness factor is [0, 0.25, 5].

4.2. Selection of optimization goals and constraints

The lightweight body can directly increase the specific power of the vehicle, effectively reduce fuel consumption and reduce emissions, which are of considerable significance to energy conservation and environmental protection. At the same time, lightweight can directly reduce the materials used to manufacture vehicles and reduce costs. Therefore, the weight of the hood is considered as an essential optimization objective. 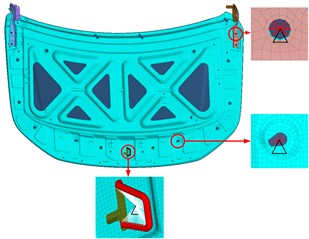 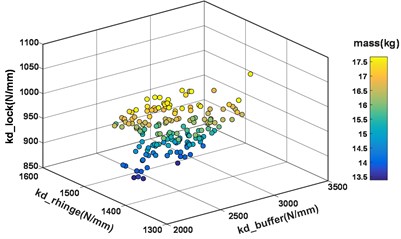 In this paper, the Opt-LHD is used to establish 325 sample points for the design variables of 24 factors with 3 levels. These 325 sample points are submitted to optistruct solver for calculation to prepare for the establishment of subsequent surrogate models.

The response surface model (RSM) is selected to establish the surrogate model of the static index of the CFRP engine hood, which includes bending stiffness, torsion stiffness, lateral stiffness and mass.

Kriging model is used to establish surrogate model for the equivalent dynamic stiffness of kd_buffer, kd_lock and kd_rhinge, and so on the first-odder modal frequency mode_1. Meanwhile, the matern Cubic function is used for fitting the deviation of these surrogates.

Table 2. The of surrogate models

Considering the static and dynamic performance of CFRP engine hood, the thickness of each layer of CFRP hood is taken as the design variable, and its static stiffness performance is taken as the constraint to carry out multi-objective optimization. The mathematical model is as follows:

The genetic algorithm (NSGA-II) is used to perform 500 iterations of optimization, and 189 sets of Pareto optimal solutions were obtained. The bubble chart of Pareto solution set is shown in Fig. 6. As shown in the figure, when the mass of the CFRP engine hood is at a relatively high level, the equivalent dynamic stiffness values of kd_buffer, kd_lock and kd_rhinge are all at a relatively high level. However, Excessive mass does not meet the original intention of the lightweight design. Considering the lightweight design, an optimal solution is selected in Pareto solution sets as the optimization scheme, which is the darkest bubble point in Fig. 6.

Table 3. The result of multi-objective optimization

The optimized CFRP engine hood is trial-produced, and the dynamic stiffness test and modal test are carried out to compare with the original steel engine hood. As shown in Fig. 7. 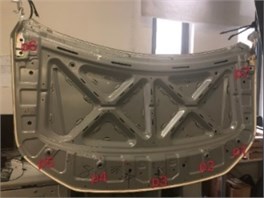 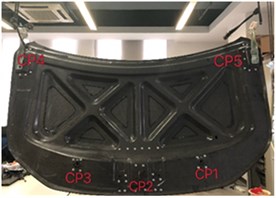 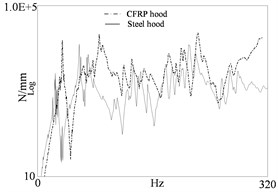 a) At the installation point of the buffer block 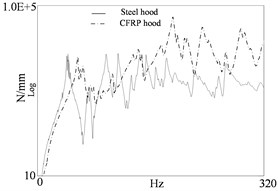 b) At the locking point 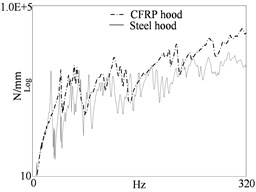 c) At the hinge point