Circular crack identification in plates based on natural frequency evaluation

Copyright © 2020 Codruta Oana Hamat, et al. This is an open access article distributed under the Creative Commons Attribution License, which permits unrestricted use, distribution, and reproduction in any medium, provided the original work is properly cited.

We propose in this paper a method to detect cracks in circular plates clamped at the circumference. It consists in analyzing and interpreting the frequency changes that occur due to a circular arc crack. We show that the effect of the crack depends on the strain energy loss, which actually is proportional to the curvature achieved by the affected region in the radial direction. Three types of cracks are considered herein to demonstrate this dependency, differing by their length. Modal analysis is performed involving a professional simulation software for the intact plate, and that with the generated cracks. We found a perfect fit when we compared the curvature of the plate in the radial direction obtained with the analytical relation with the frequency values for the crack displaced along the radius. Therefore, using the curvature of several vibration modes we can obtain damage patterns that can be used to locate circular cracks.

Vibration of circular plates became during the last decades an import issue in various engineering applications such as: aerospace, naval architecture or pressure vessels. Therefore, this subject received a significant amount of research [1-5]. Thus, transverse vibration of simply supported circular plates with elastic constrains was investigated by Navita and Leissa [6] or Laura et al. [7]. Irie et al. [8] studied the case of circular plates with elastic restrains along some radial segments. Grossi and Laura [9] have determined the lower frequency coefficients of polar orthotropic circular plates supporting concentrated masses, by involving the Rayleigh-Schmidt technique. Furthermore, Bercin [10] has obtained the natural frequency coefficients for clamped orthotropic plates by using Kantorovich’s method. Free vibration of circular plated\s with varying thickness, fixed to a Winkler foundation was solved by Laura and Gutierrez [11].

In this paper we analyzed the frequency changes which are occurring due to the appearance of a circular arc crack. Analyzing three types of cracks, we could conclude that the crack effect depends on the strain energy loss. Finally, by involving the curvature of several vibration modes, we show how damage patterns may be involved in the process of circular cracks detection.

2. Deflection and curvature of circular plates

Let us consider a circular plate as that represented in Fig. 1(a) to which we associated polar coordinates. If assuming harmonic vibration, the well-known equation of motion for free vibration of this plate is:

In Eq. (1), the mode shape amplitude is denoted , is the angular frequency and represents the time. 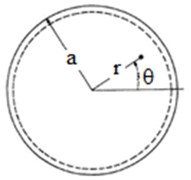 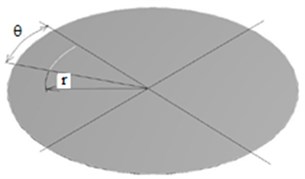 Taking into consideration the classical differential equation of motion for the transverse displacement :

In Eq. (2) the term is the flexural rigidity, calculated with the mathematical relation:

where is Young’s modulus, is the plate thickness, is Poisson’s ratio and is the mass density. Note that:

is the Laplace operator. By substituting Eq. (1) into Eq. (2) results:

Because the origin of the coordinate system coincides with the center of the circular plate, the solution of Eq. (5) becomes:

The boundary conditions [3] are for , so it results:

When Eq. (6) is substituted into Eq. (7) it will be obtained the characteristic equation:

For a simply supported circular plate, the normalized mode shape function is:

The damage taken into account is of a circular shape with a wide angle of: 22.5 deg, 90 deg and 360 deg (Fig. 1(b)). The depth of damage is of 1 mm. The damage is moved along the whole radius of the circular plate.

Fig. 2. Comparison between analytic calculation and FEA analysis for 0, 0, 1 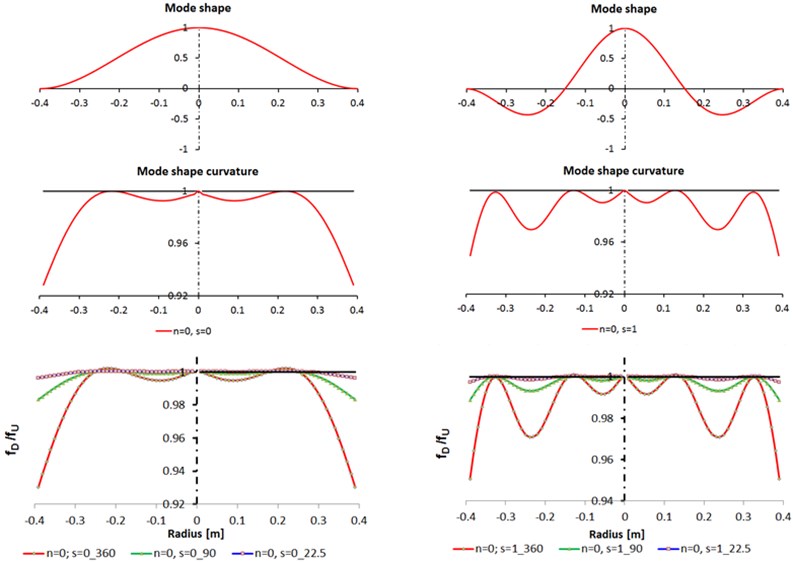 4. Comparison of the results

The analytic results of the mode shape for numbers of nodal diameter 0, 1 and numbers of nodal circles 0, 1 are presented in Figs. 2-3. Also, in this figures, for the same nodal numbers, are presented the comparison between analytic calculation of the mode shape curvatures and FEA analysis for the ratios between the natural frequencies for the damaged and undamaged circular plate ().

Fig. 3. Comparison between analytic calculation and FEA analysis for 1, 0, 1 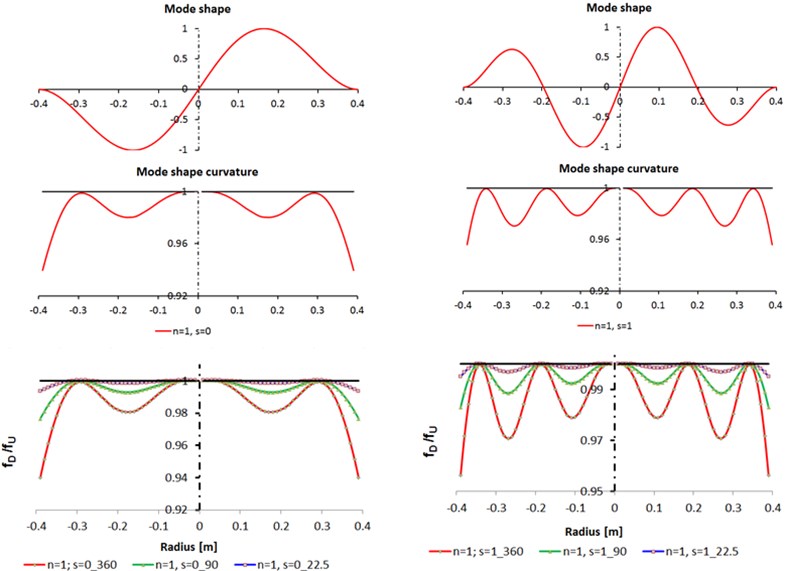 The ratios between the natural frequencies for the damaged and undamaged circular plate can be used to indicate the damage position and extent since for each damage case a specific sequence of frequency changes exist.

When the value of the damage angle is modified, the shape of the curve is the same by increasing the angle of damage the frequencies ratio. No significant frequency changes can be observed when the damage is located near the center of the circular plates.

Comparing the results from circular plate with the relationship obtained at beams [13] to calculate de modified frequency in damaged condition , that is:

we concluded that this relation can be applied for circular plates. In Eq. (11) we denoted the severity of the damage and with the mode shape curvature.