Backstepping control of a tank with a flexible barrel in motion

Copyright © 2020 Zong Fan Wang, et al. This is an open access article distributed under the Creative Commons Attribution License, which permits unrestricted use, distribution, and reproduction in any medium, provided the original work is properly cited.

In order to simplify the dynamic equation of tank and design the controller conveniently, the barrel is often regarded as a rigid body in the previous tank barrel model. However, the barrel whose structure is a long straight pipe, is a typical flexible body in practice, it will affect the controller performance if it is directly treated as a rigid body. In this paper, we consider the flexibility of barrel and design a backstepping controller firstly. Then, Matlab and RecurDyn co-simulation were combined to compare the tracking performance of the method under different road excitation. The results show that backstepping control can adjust the muzzle angle of the flexible barrel in real-time. 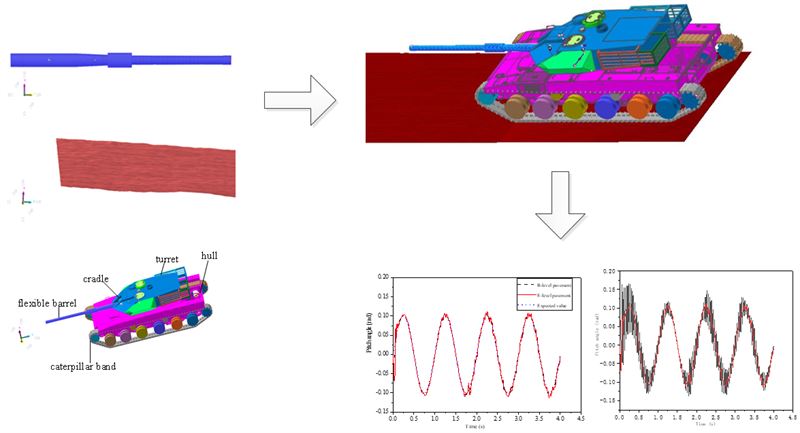 In the modern battlefield, tank weapons are required with high mobility and precision of attack, to destroy the enemy and protect themselves safely at the same time. Theory and experiment show that the perturbation of the muzzle angle of the tank barrel is the main factor which affects the firing accuracy of the projectile, so solving the problem of muzzle angle perturbation is one of the most important methods to improve the firing accuracy of a tank gun. Scholars have done a lot of research on the influencing factors of muzzle angle disturbance, which include road excitation, barrel vibration, and nonlinear fire control system, etc. [1-4]. Moreover, many achievements have been made based on the single-factor compensation research, to achieve accurate control of muzzle angle. However, considering the influence of the elastic deformation of the barrel caused by the firing of the barrel due to heat and dead weight on the muzzle angle of the barrel, the research is still not perfect. In particular, the research on the elastic deformation of gun barrel caused by vehicle body vibration is not thorough enough.

Therefore, in this paper, we established a tank dynamics model with a flexible barrel and designed a controller using the backstepping control method [5, 6] firstly. Then, Matlab and RecurDyn software are used for co-simulation to realize the real-time tracking of the muzzle angle of tank gun in the excitation effect of different levels of pavement.

The tank barrel can be approximately treated as a long straight thick wall cylinder whose main material is steel. Therefore, it can generate elastic deformation due to the action of gravity during the driving process of the vehicle. In this paper, it is assumed that: the cross-section of the vertical gun bore axis is still flat after deformation (rigid cross-section is assumed), and the cross-section is still perpendicular to the axis after deformation. The finite element model of the body tube is drawn by using the finite element software, as shown in Fig. 1. 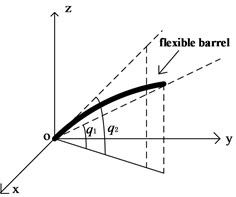 The dynamic equation is constructed as:

Road roughness refers to the function of the change in road length caused by the road surface relative to the base height when the road surface is uneven. Since road roughness cannot be described by an explicit function, mathematical characteristic variance and power spectral density function are usually used to describe the road roughness. According to GB7031-2005 mechanical vibration-pavement spectrum measurement data report [9], the pavement power spectral density can be expressed as:

The road modeling method used in this paper is the white noise filtering method, which changes the road roughness coefficient according to different road levels, and uses Matlab program to simulate the road time domain model.

The multi-body simplified model of tank with flexible barrel is shown in Fig. 5, which is mainly composed of a caterpillar band, cradle, turret, hull and flexible barrel. 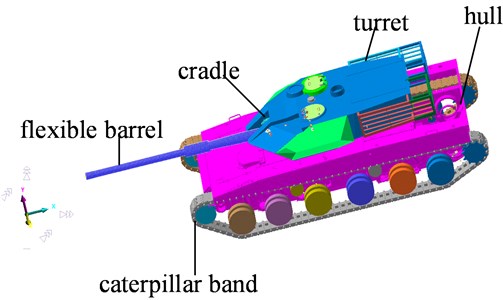 The hull and caterpillar band are connected by a suspension system, etc. The turret can rotate through the saddle ring in the horizontal plane relative to the hull, and realize the adjustment of the barrel's horizontal attitude angle. The flexible barrel can move forward and backward relative to the cradle, and simulate the counter-recoil and recoil process of the barrel during firing. The cradle can rotate vertically around the turret to adjust the pitch angle of the barrel. The influence of ground roughness has been transmitted to the hull through the caterpillar band and suspension system, which is further accurately transmitted to the flexible barrel. In this paper, we only consider the influence of the flexible barrel on the pitch angle. Therefore, the hull, cradle and turret are regarded as rigid bodies. The researches show that only gravity is taken into account, the flexibility of other parts has little influence on the angle of the muzzle when the tank is running, except the flexible barrel.

Backstepping control is a kind of nonlinear system design method in which the complex nonlinear system is decomposed into several simpler low-order systems by introducing a virtual controller. Then the Lyapunov function is selected to ensure the stability of the system, and the control law is derived. The effective control and global adjustment of the system are realized.

Define the state variable , , the Eq. (1) can be written as a state-space form:

According to Lyapunov’s stability theorem that the origin is stable if there is a continuously differentiable positive definite function and is negative semidefinite. The Lyapunov function can be defined as:

It is obvious that the function is a continuously differentiable positive definite function. Its derivative can be written as:

To ensure that is negative semidefinite, the derivative of the error matrix can be expressed as:

In order to make , we just have to satisfy . Therefore, the control input can be designed as follows:

By solving the differential equation , we get the equation as follows:

The simulation model was built in Matlab. Given initial conditions: the tank is accelerated to 30 km/s for the first two seconds and then travels at a constant speed. Add the control input of muzzle angle as , the response of tank to control on B-level and E-level pavement is analyzed as shown in Fig. 6. And compared the response of muzzle disturbance on the E-level without backstepping control as shown in Fig. 7. The results show that the muzzle disturbance can be reduced by more than 90 % under the backstepping control, and the control performance of the tank barrel is improved significantly. 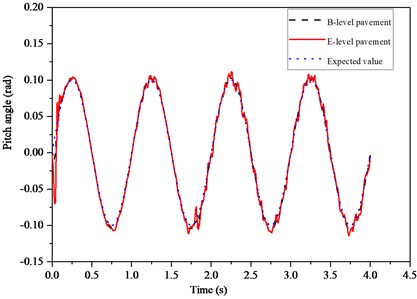 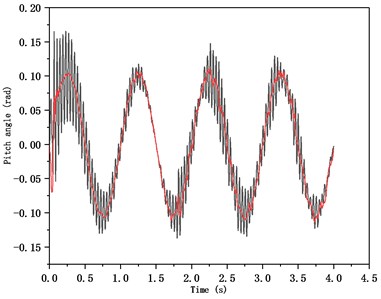 In this paper, the rigid-flexible coupling dynamics model between tanks was established based on multi-body dynamics software RecurDyn and the backstepping control method was accomplished in Matlab. This paper analyzes the tracking effect of the pitch angle of the tank barrel in driving under different levels of the road surface and verifies the feasibility of the backstepping control method in the control of flexible body pipe. In the rigid-flexible coupling model of the tank, only the barrel is regarded as a flexible body and other components as a rigid body. However, the backstepping control does not consider the thermal deformation of the body tube, and the feasibility of the controller has not been verified under the condition of continuous firing, which will be gradually improved in future work.