Processing method of EMD endpoint effect based on SVRM extension

Copyright © 2020 Kai Chai, et al. This is an open access article distributed under the Creative Commons Attribution License, which permits unrestricted use, distribution, and reproduction in any medium, provided the original work is properly cited.

Aiming at the problem of endpoint effect in empirical mode decomposition (EMD), the application method of support vector regression machine (SVRM) in EMD extension data prediction is studied. Firstly, the basic principle, data extension method and parameter setting of SVRM are introduced. Secondly, several application methods of SVRM in EMD extension are studied to analyze and verify the operational efficiency and decomposition accuracy characteristics of each method respectively. Finally, the proposed extension method based on SVRM extreme value point prediction can greatly improve the operation efficiency of SVRM long time extension. The simulation signal analysis shows that the SVRM extreme point prediction extension method not only improves the accuracy and reliability of EMD decomposition, but also effectively inhibits the end-point effect phenomenon, significantly reduces the SVRM extension time, and improves the practicability of EMD method.

The extension method based on the original data is based on the data itself, which is fast and suitable for long time extension. Huang et al. found the problem of endpoint effect when the EMD method was proposed, proposed the characteristic wave method and applied for a patent [2]. Mirror closed extension method is simple in operation and efficient in the extension of long data. However, the truncated signal at the extreme value will cause partial information loss, so it is not suitable for the processing of short data, and it is not effective when the signal symmetry is poor [3]. The sinusoidal matching method alleviates the problem of end-point effect to a certain extent, but in practical application, the constructed waveform is difficult to reflect the change trend of the signal, and its practicability is poor [4]. The waveform matching method maintains the change trend of the original signal well, and has a good effect on the signal with regular waveform and strong periodicity [5]. However, for the signal with bad periodicity, it may be difficult to find the wavelet with high matching degree. The algorithm based on data prediction has high general accuracy and good extension smoothness, but the application range of EMD is affected due to the large amount of computation [6]. The prediction algorithm based on neural network has a high accuracy, but it requires a lot of training samples and takes too long learning time to carry out real-time online processing [7]. The adaptive autoregressive model processing method has high operational efficiency, but the autoregressive model itself belongs to linear operation, and its application effect to non-stationary signals is poor [8]. On the basis of summarizing the principle of endpoint effect in EMD decomposition, this paper studies the application of Support vector machine regression (SVRM) in EMD extension data prediction based on the problem of endpoint effect in empirical mode decomposition (EMD).

After constructing the regression training model of SVRM, the data points can be extended forward and backward by using it. The following is an example to introduce the extension method and steps of SVRM:

(a) Construct the training set according to the existing data sequence.

For a given data sequence , ,…, , where is the number of sampling points in the data column. Firstly, the number of training samples is determined, and a training set , where , , .

The regression model is constructed according to the above method.

The first predicted value outside the boundary can be obtained:

where, the value of any extension is .

where, is the distance between extremum points; and are respectively the moment of the th minimum and maximum value of the signal, is the sample length coefficient, 0.

3. EMD extension algorithm based on SVRM

In order to prevent the endpoint effect of EMD from spreading into the signal as the decomposition progresses, we always hope to obtain the data extension of sufficient length accurately in a relatively short time. In order to ensure the prediction accuracy of data, sufficient sample quantity is required, while a long extension requires a large sample quantity, which will result in low computational efficiency. Therefore, improving the efficiency of SVRM extension in EMD application has become an urgent problem to be solved.

3.2. EMD decomposition and extension simultaneously based on SVRM

In order to avoid the problem of operation efficiency caused by SVRM long time extension, an effective method is to make full use of the accuracy of SVRM short time extension, and adopt appropriate algorithm to avoid long time extension. The effective method is to decompose while extension. The idea is to conduct a short time extension with a length of more than two extreme points before each screening of EMD, and then cut off the extension part after generating the envelope. Since the algorithm needs to be extended before each screening, it only needs to extend a pair (a maximum value and a minimum value) above the extreme point at both ends of the signal each time. Repeated simulation experiments verify that, under the same conditions, when the two ends extend more than four extreme points respectively, the decomposition results will no longer change significantly. In order to ensure the decomposition accuracy, the method of extending four extreme points at both ends is adopted in this paper. Set 4, then the EMD processing results of are shown in Fig. 3.

Fig. 2. Decomposition of simulated signal after one extension 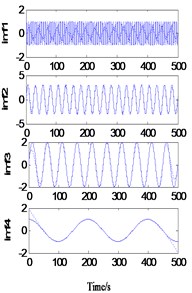 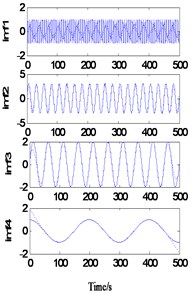 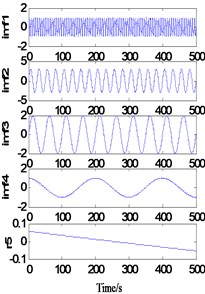 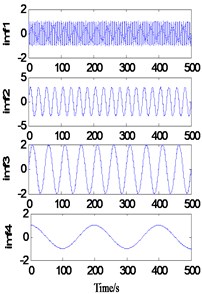 It can be seen from Fig. 3 that when 1, due to the small sample number and poor extension accuracy, the endpoint effect is restrained to some extent, but residual terms appear. When 2, a relatively accurate decomposition result was obtained, and the operation time reached 388.2863 s.

Fig. 3. Decomposition of simulated signal after decomposition and extension simultaneously 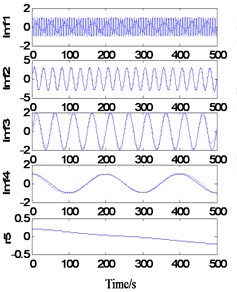 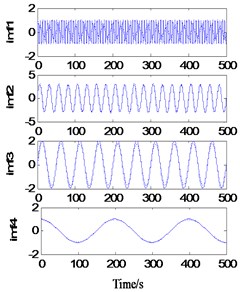 The extremum forecast and continuation process, SVRM extremum predict continuation of sample sequence is extremum sequence of original signal, so the methods require original signal have enough number of extreme value (experiments show general may not be less than 6), when the signal extremum number is small, SVRM based on hard less extreme value point accurately predict epitaxial signal extremum position and value. It should be noted that, with the progress of EMD decomposition, the frequency components of the obtained components gradually decrease. If this method is used for side decomposition and side continuation, the phenomenon of inaccurate continuation may occur in the low-frequency stage due to the small number of extreme points. Therefore, this method is more suitable for the previous continuation of decomposition. The decomposition results are shown in Fig. 4. 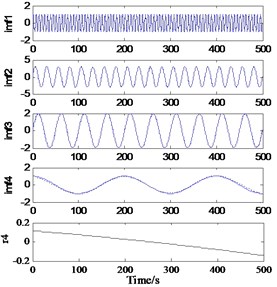 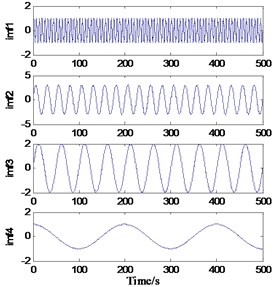 In order to verify the validity of the effect of the endpoint effect and the practical practicability of the actual hydraulic system, the sampling frequency of the measured hydraulic system is analyzed, and the sampling frequency is 5 kHz, and the sampling point is 2048. The results of EMD continuation based on SVRM extremum prediction results are as shown in the Fig. 5. The weak at both ends, and the similar components of the frequency are not visible in the endpoints, and the model of the IMF component is obviously suppressed.

Based on the application of SVRM in EMD continuation, this paper introduces the prediction principle of SVRM, and proposes a method to set the extension length and sample number with the signal extremum scale. The advantages and disadvantages of various SVRM application methods in EMD continuation are analyzed from the Angle of decomposition accuracy and efficiency.