Copyright © 2021 Oleksandr Kachur, et al. This is an open access article distributed under the Creative Commons Attribution License, which permits unrestricted use, distribution, and reproduction in any medium, provided the original work is properly cited. 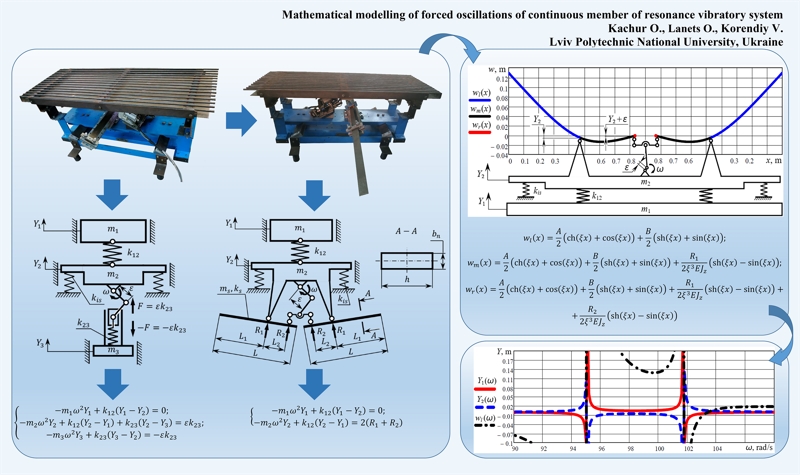 In the paper [7], there are discussed the possibilities of synthesizing the oscillatory systems with continuous members, and the problems of modelling the dynamic behavior of an elastic rod considered as a disturbing body. Different theoretical techniques of studying free vibrations of a cantilever beam with several spans are considered in [8]. Despite the fact that numerous scientific publications are dedicated to discrete-continuous oscillatory systems, the problems of synthesizing the three-mass structures with rod-shaped elastic members excited by crank mechanisms are not thoroughly investigated. In the previous publications of the authors, there were considered the technique of calculation of the inertia-stiffness parameters of the three-mass discrete oscillatory system ensuring its operation in energy-efficient resonance mode [9], and the forced and free oscillations of an elastic rod considered as a disturbing body of the three-mass discrete-continuous oscillatory system [10, 11]. The novelty of the present paper consists in deriving the mathematical model of the discrete-continuous vibratory system, in which the model of the discrete subsystem is combined with the model of the continuous subsystem by applying the reactions in the supports holding the uniform elastic rod.

In Fig. 1(a), there is presented the three-mass discrete vibratory system whose bodies performs straight-line (linear) oscillations [10]. It consists of the active mass connected to the intermediate mass with the help of the spring unit of stiffness . The vibration excitation of the system is characterized by the forced circular frequency , and is carried out with the help of the crank mechanism whose drive is installed on the intermediate mass . The crank of the exciting mechanism ensures the disturbing eccentricity , and is connected to the spring unit installed on the reactive mass . The intermediate mass of the vibratory system is supported by the vibration isolators of stiffness . The mathematical model of the three-mass discrete oscillatory system can be derived in the amplitude form as follows [10]:

where , , are the amplitude values of displacements of the corresponding masses.

Fig. 1. Calculation diagrams of a) three-mass discrete and b) discrete-continuous oscillatory systems 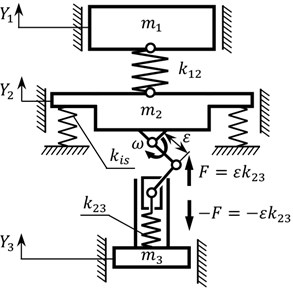 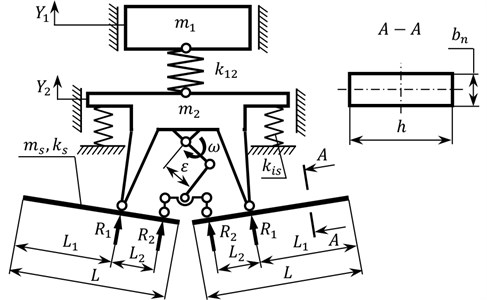 The general condition of increasing the system efficiency consists in the fact that the value of the reactive mass and the stiffness of the corresponding spring unit must be very small in comparison with the other masses and springs. Such features are characteristic of an elastic body, i.e. continuous member, which optimally combines the inertial and stiffness parameters. The basic peculiarity of the oscillatory system presented in Fig. 1(b) consists in the fact that it is constructed of the discrete and the continuous subsystems. The discrete subsystem is formed by the double-mass oscillatory system that consists of the active mass and the intermediate mass , which are connected to one another by the spring unit of the stiffness . The continuous subsystem is formed by two elastic bodies simultaneously combining the distributed stiffness parameters and inertial parameters . The continuous member is considered as an elastic rod connected to the intermediate mass and to the disturbing rod of the crank excitation mechanism by two hinged joints. Due to the rotation of the crank, the rod performs oscillatory motion, and is subjected to the corresponding reactive forces and applied at hinged supports. The cantilever section of the elastic rod ensures the possibility of accumulating the necessary inertial energy for disturbing the intermediate body, as well as the whole oscillatory system. The considered system consists of two continuous members.

To determine the amplitude values of displacements of the active mass and the intermediate mass of the discrete-continuous oscillatory system, let us rewrite Eq. (1) in the following form:

where the expression models the action of two continuous members upon the intermediated mass; , are the reactions in the hinged supports holding the elastic rods. The reactions in the supports can be determined from the system of equations describing the forced oscillations of the continuous member. Such a system can be formed on the basis of the circular and hyperbolic functions (Krylov-Duncan functions) , ,, [11]:

Solving Eq. (3), let us derive the analytical expressions for the unknowns , , , :

Substituting Eq. (6) and Eq. (7) into Eq. (2), the analytical expressions for the amplitudes and have been derived. They are not presented in the paper because of their large sizes. Nevertheless, the obtained dependencies allow for analyzing the frequency-response curves (or, so-called, amplitude-frequency characteristics) of the discrete-continuous system.

Using the derived analytical expressions for the amplitudes and , let us plot the corresponding frequency-response curves (or, so-called, amplitude-frequency characteristics) of the discrete-continuous system (Fig. 3). Based on the obtained results it can be seen that the first two resonance peaks take place at the frequencies of 95 rad/s and 101.8 rad/s. This fact allows for concluding that the considered discrete-continuous system is working under the inter-resonance conditions characterized by high efficiency. The next stage of the investigations is aimed at analyzing the amplitude of oscillations of the continuous member.

3. Calculation of deflection of the continuous member

Substituting the above calculated values of the constants , , and the reactions , (see Eq. (9)) into Eq. (10), let us plot the corresponding deflection diagram (Fig. 2).

Fig. 2. The diagram of deflections of the continuous members during their forced oscillations

Using Eq. (10) for analyzing the deflection of the free end of the continuous member, and taking into account the value of eccentricity of the crank mechanism, which ensures the amplitude of oscillations of the active mass equal to 5 mm at the forced frequency of 99.5 rad/s, let us plot the frequency-response curves of the discrete-continuous system taking into account the deflection of the continuous members (Fig. 3).

Fig. 3. Frequency-response curves (amplitude-frequency characteristics) of the discrete-continuous system taking into account the deflections of the continuous members

The possibilities of development and implementation of the combined discrete-continuous vibratory systems are considered. It is proposed to design the disturbing member in the form of the uniform elastic rod with distributed inertia and stiffness parameters (Fig. 1). The mathematical model describing forced oscillations of the three-mass discrete-continuous vibratory system is derived, and the equations of deflections of the continuous member are deduced using the Krylov-Duncan functions. In the proposed calculation diagram, the model of the discrete subsystem is combined with the model of the continuous subsystem by applying the reactions in the supports holding the uniform elastic rods. Based on the prescribed inertia-stiffness parameters of the vibratory system, the analytical dependencies for calculating the reactions in supports are derived.

Using the proposed mathematical model describing the forced oscillations of the three-mass discrete-continuous system, the corresponding frequency-response curves (or, so-called, amplitude-frequency characteristics) are plotted (Fig. 3). The first two resonance peaks take place at the frequencies of 95 rad/s and 101.8 rad/s. This means that the system is working under the inter-resonance conditions characterized by high efficiency. The amplitude displacement of the active mass is equal to 5 mm at the forced frequency of 99.5 rad/s.

Based on the derived equation for analyzing the deflection of the free end of the continuous member, the corresponding deflection (bending) diagram is plotted (Fig. 2). The maximal displacement of the rod’s free end is equal to 0.129 m, of the left hinged support – 5.9∙10-3 , and of the right hinged support – 1.15∙10-3 m. The prospects of further investigations on the subject of the paper include the analysis of the damping effect on the system oscillations, and the experimental testing of forced oscillations of the discrete-continuous system.