Failure analysis of gas pipeline in a gas collecting station

Copyright © 2021 Yong Chen, et al. This is an open access article distributed under the Creative Commons Attribution License, which permits unrestricted use, distribution, and reproduction in any medium, provided the original work is properly cited.

The gas collecting line of a gas collecting station failed and had obvious corrosion pits. The failure reasons of the pipeline in this section are studied by means of macroscopic morphology analysis, mechanical property analysis, hardness analysis and microstructure analysis. The results show that the main reason is the mechanical damage caused in the construction process for the damage of the anticorrosive coating on the outer surface of the pipe section. The main reason for the failure of “corrosion pit” inside the pipe section is that the wet gas transported contains CO2, which dissolves in water to generate H2CO3, and the pipe section is corroded in H2CO3 solution by electrochemical corrosion, which gradually develops into a more serious corrosion pit. In order to prevent the occurrence of such failure, 13Cr (martensite) material can be used to meet the corrosion resistance requirements, but also can appropriately increase the gas temperature in the tube to reduce the solubility of CO2 in water to prevent corrosion.

Pipeline is the most economical and safe way to transport oil and gas resources, but it is also extremely vulnerable to the influence of external pressure, corrosion, third-party damage and natural disasters [1-3]. In oil and gas storage and transportation engineering, the chemical properties and metallographic structure of the gas collecting pipeline itself determine that this iron-based alloy is a kind of corrosion-prone alloy [4-5]. According to a large number of data analysis at home and abroad and field investigation and analysis of oil and gas fields, the main failure of gas gathering pipeline is corrosion failure [6-8]. Generally speaking, the failure of the gas gathering pipeline is mainly due to three reasons: 1. The natural gas contains CO2, which reduces the pH value of the water, which is weakly acidic and forms the corrosion product FeCO3 [9]. 2. Natural gas contains H2S and CO2, which form an electrochemical reaction similar to a galvanic cell and chemical reaction that destroys the metal lattice, and corrodes the gas gathering pipeline [10]. 3. The natural gas contains CO2 and CL, forming a “sweet gas” environment and corroding the gas gathering pipeline [11].

information provided, the pipeline is put into operation in May 2019, and the design specification of the pipeline is Φ323.9×8 mm seamless steel pipe, and the steel grade is L360N. The design pressure of the gas gathering pipeline is 8.5 MPa, the design gathering and transportation capacity is 260×104 m3/d, and the length is 6.65 km. The transmission medium is raw material gas (moisture), uncontained sulfur, and the anti-corrosion material is 3PE. There are nine obvious corrosion pits on the inner wall of the failed pipe sample, and the outer surface anticorrosion layer is partially damaged.

2. Physical and chemical testing and analysis

The macro morphology of the failed pipeline is shown in Fig. 1 and Fig. 2. It can be seen from Fig. 2 that there are 9 obvious corrosion pits on the inner wall of the tube sample. After cutting the relatively serious corrosion pits, the minimum remaining wall thickness of all the corrosion pits are measured to be 2.72 mm, 2.66 mm, and 2.36 mm, respectively.

Fig. 2. Macroscopic appearance of the inner surface of the tube sample

Fig. 3. The serious pipe section with “soil layer with small stone slag” is adhered to the surface 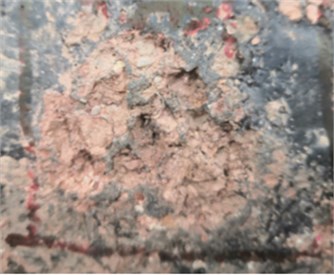 Fig. 4. The outer surface of the tube sample after the anticorrosion coating is worn off 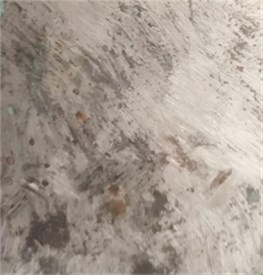 Take four tensile test specimens from the tube body, the total length of the processed sample is 70 mm, the width of the parallel length of the specimen 15, and the transition arc radius  6 mm, according to GB/228.1-2010 “Metal Material Stretching Test Part 1: Room temperature test method” to carry out the test. The test results are shown in Table 1; the hardness test specimens are taken from the pipe body, the sampling direction is a transverse circular ring, and the test is carried out in accordance with the requirements of the GB/T230.1-2004 Rockwell hardness test standard for metal materials. The test results are shown in Table 2; Take the impact performance test sample from the sample, the sampling direction is transverse (circumferential), and the size of the test piece is 5×10×55 mm. The test was carried out according to GB/T229-2007 “Charpy Pendulum Impact Test Method for Metallic Materials”, and the test results are shown in Table 3.

A sample was taken from the failed pipe sample, and the chemical composition of the sample was analyzed by a direct-reading spectrometer. The analysis result showed that the chemical composition of the failed pipe sample complied with the relevant regulations of GB/T 9711-2017 for steel pipes for pipeline transportation systems in the petroleum and natural gas industry. See the results Table 4.

Table 5. The results of elemental content energy spectrum analysis of sample 1 and sample 2

Excluding the possibility of sulfide and O2 corrosion, combined with the XRD analysis results, it can be judged that the drill pipe corrosion is mainly caused by CO2 corrosion. The gas collecting pipeline of this gas collecting station conveys wet gas. The CO2 in the gas gathering pipeline is dissolved in water, which reduces the pH value of the water and becomes weakly acidic, forming the corrosion product FeCO3. CO2 itself does not It does not corrode the pipeline, but it is extremely corrosive to metal materials after being dissolved in water, and the corrosion of low-carbon alloy steel by CO2 is mainly pitting corrosion [13-15].

CO2 corrosion is also called Sweet Corrosion in the oil and gas industry [16-18]. Its essence is that CO2 dissolves in water to generate H2CO3, and metal electrochemical corrosion occurs in H2CO3 solution. Regarding the anodic reaction in the CO2 corrosion process, there is currently no consensus [19-21]. It is generally believed that in a solution containing CO2, the anode reaction is:

At the same time, during the CO2 corrosion process, the corrosion rate of steel is controlled by the cathodic reaction, which is as follows: .

Both H+ and H2CO3 can be reduced on the electrode. For the reduction of H+, it can be expressed as: .

The cathode process is the reduction of H2O and HCO3-, namely:

Among them, HCO3- has a great influence on the cathode reaction, and the cathode reduction reaction is controlled by the diffusion of HCO3-. At the beginning of corrosion, Fe(HCO3)2 with strong bonding force has already formed on the metal surface, and the film can change: , The formed FeCO3 film has poor bonding force with the metal matrix. Since the volume of FeCO3 is smaller than that of Fe(HCO3)2, the volume shrinks during the conversion process, forming a poorly protective FeCO3 film with micropores, which leads to the corrosion of the gas gathering pipeline [22-25].

1) The chemical composition, metallographic structure, Rockwell hardness and impact performance of the gas gathering pipeline meet the requirements of relevant standards, and the yield strength in the tensile performance is lower than GB/228.1-2010 “Metallic Material Tensile Test Part 1: Room Temperature” The standard value of the test method should be judged to be caused by CO2 corrosion.

2) The gas collecting pipeline of this gas collecting station is mainly corroded by CO2. The FeCO3 film formed by the gas gathering pipeline has a poor bonding force with the metal matrix, because the volume of FeCO3 is larger than that of Fe(HCO3)2. The volume is small, and the volume shrinks during the conversion process, forming the poorly protective FeCO3 with micropores. FeCO3 can have a “DC battery effect” with iron, leading to electrolytic corrosion.

1) In order to prevent the CO2 corrosive environment from damaging the gas gathering pipeline, corrosion-resistant alloys are used as pipeline materials. According to related literature, nickel-based alloys and 22Cr have the best corrosion resistance, but they are not economical. 13Cr (Martensite) can be used. It can fully meet its corrosion resistance requirements.