Copyright © 2022 Bharatish Achutarao, et al. This is an open access article distributed under the Creative Commons Attribution License, which permits unrestricted use, distribution, and reproduction in any medium, provided the original work is properly cited. 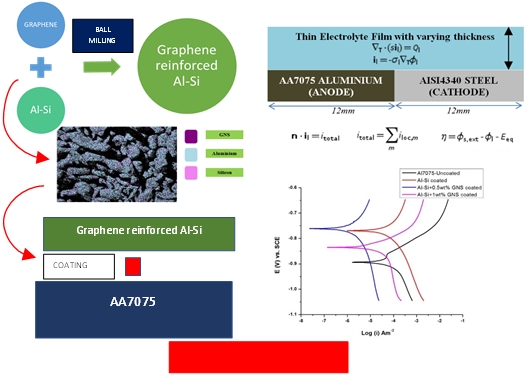 AA7075 is one of the most common aluminium alloys adopted for structural applications such as engine castings, shafts, military rifles, inline skating frames, glider airframes, turbine castings and bicycle components [1-4]. While in contact with copper alloys, stainless steel, nickel alloys and titanium, AA7075 aluminium suffers from severe galvanic corrosion and subsequent degradation. This can be prevented by suitably coating AA7075 surface for improving the corrosion resistance [5]. Atmospheric galvanic corrosion occurs when thin electrolyte film ranging from 1 µm to 10 mm develops on the metal surface [6-7]. The electrolyte film thickness [8] is greatly affected by the relative humidity of the environment, salt load density and roughness of the material surface. Many researchers have adopted finite element based modeling to understand the interaction between various bimetallic galvanic couples and electrolyte to predict their corrosion behavior. These galavanic couples include Iron – Zinc [9]; AA7050 Aluminium – 316 L Steel [10]; AA5083 aluminium – H116 steel [11]; AA2024 Aluminium-CFRP [12-13] and Zinc – Steel [7].

Several researchers have focused on improving the corrosion behavior of AA7075 alloy with various surface modification techniques such as plasma spray, anodizing and cladding. Dhanish et al. [2] developed corrosion resistive layer for 7075 aluminium alloy by simultaneously optimizing sealing parameters of MnVO and anodization. The MnVO sealed AA7075 exhibited lower corrosion current density of 259 nA/cm2 as against 4.5nA/cm2 obtained for unsealed AA7075. Li et al. [16] performed laser cladding of Ti/TiBCN coatings on 7075 aluminium alloy and found the improvement of corrosion potential of 7075 aluminium alloy from –1.406 V to –1.271 V. The corrosion current density was reduced by one order magnitude from 10-4 to 10-5 A/cm2. Rao et al. [17] investigated the electrochemical behaviour of alumina coated 7075 aluminium alloy surface using Plasma Electrolytic Oxidation method. Significant reduction in corrosion current density from10-4 to 10-7 A/cm2 and corrosion potential from –0.781 V to –0.699 V were observed. Al-Si alloy with near eutectic composition prove to be a promising option as coating material due to high fluidity, high corrosion and wear resistance, high strength and low thermal expansion coefficient [19]. Al-Si alloy is also used as a filler material for repairing corroded parts in structural air frames. Some of the researchers have focused on improving the corrosion resistance using Al-Si coating on aluminium and steel substrates.

Graphene is a new promising reinforcement material adopted as a corrosion inhibitor due to its impermeability and hydrophobicity that creates a barrier against gases and liquids in a corrosive environment. However, the uniform dispersion of graphene into the Al - Si powder is highly challenging and not yet been reported so far. The powder mixing techniques such as ball milling and wet mixing can be adopted to ensure the uniform dispersion without forming agglomerates [25-35]. The effect of such graphene reinforced Al-Si coatings on AA7075 aluminium alloy also needs to be explored. Hence, this paper focuses on investigating the effect of graphene reinforced Al-Si coatings on corrosion behavior of AA7075 aluminum alloy. The graphene in the form of nano sheets (0.5 wt.% and 1 wt.%) were reinforced into the Al-Si powder using ball milling technique. Then the 70 µm thick coatings were deposited on AA7075 substrate (10 mm×25 mm) using plasma spray method. The potentiodynamic polarization study was performed at electrochemical workstation (CHI660E-CH) to measure corrosion potential and corrosion current density of coated AA7075 substrates. A numerical model was developed to simulate the atmospheric galvanic corrosion behavior of graphene reinforced Al-Si coated AA7075 using COMSOL Multiphysics 5.3 finite element analysis package. The homogeneous dispersion of graphene into Al-Si powder was confirmed using scanning electron microscope (SEM) equipped with energy dispersive spectrometer (EDAX).

The Al-Si powder (Al ~ 85.20 %, Si ~ 11.25 %, Fe ~ 0.27 %) with 45 µm powder particle size was procured from Parshwani Metals, Mumbai. The graphene nano sheets (GNS) having 5 ~ 10 nm thickness and ~10 µm lateral size was procured from Adanano technologies, Shimoga. The morphology of Al-Si powder and particle size distribution is as shown in Fig. 1(a) and Fig. 1(b) respectively. The morphology of GNS at three different magnifications are as shown in Fig. 2(a-c). The aluminium 7075 alloy was procured from Bharath Aerospace Metals, Mumbai. The substrates were machined to a length of 25 mm and diameter 10 mm. The elemental composition of the AA7075 is as shown in Table 1.

Fig. 1. a) The morphology of Al-Si powder, b) Particle Size distribution of Al-Si 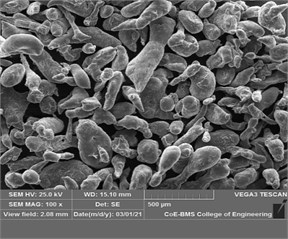 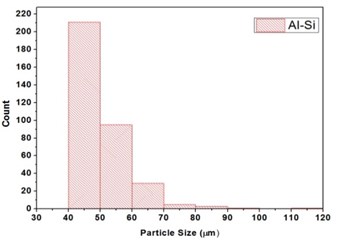 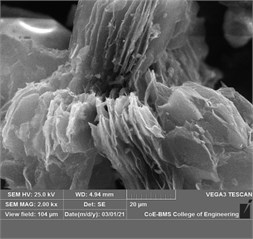 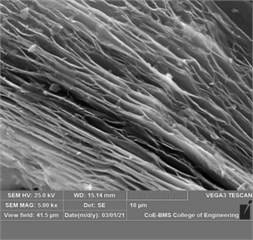 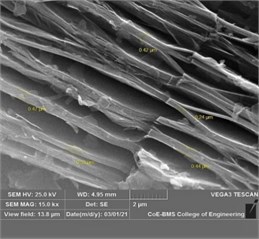 The Al-Si powder mixed with 0.5 wt.% GNS and 1 wt.% GNS separately were ball milled using Planetary Mono mill Pulverisette 6 (Classic line). The powder mixture of Al-Si powder with GNS was first poured in a steel jar of 500 ml capacity and steel balls of 5 mm diameter weighing 300 g were adopted. The Ball-to-Powder ratio (BPR) was set at 5:1 and ball milling was carried out in dry media without any process agent. To obtain the homogeneous mixture, powder was first milled at 180 rpm for 0.5 hour and then subsequently till 5 hours. In order to avoid overheating and sticking of powders to ball, every milling cycle consisted of 5 minutes of milling and 10 minutes of halt. The microstructure was obtained for the samples collected at 0.5 hour, 1 hour and 5 hours of milling for both 0.5 wt.% GNS and 1 wt.% GNS. Also, the elemental composition was mapped to visualize the Al-Si and GNS mixing.

The Al-Si powder reinforced with 0.5 wt.% and 1wt.% GNS was deposited on AA7075 substrate. Initially, the specimens were cleaned using acetone solution to decontaminate the same. Then, the grit sand blasting was followed with air pressure of 3 -5 kg/sq.cm to deoxidize and make the surface rough for better adhesion of the coating. Argon (Flow rate- 100-150 standard cubic feet per hour (scfh); pressure-100-120 psi) and hydrogen (Flow rate- 10-13 scfh; pressure < 50 psi) were the secondary gases used for spraying. The powder was fed at a rate of 100-120 g/min and at a spray distance of 150 mm.

The potentiodynamic polarization studies were conducted using CHI660E-CH-instrument and with thoroughly cleaned AA7075 alloy specimen. The uncoated Al 7075 (1), Al-Si coated (without reinforcement) Al 7075 (2), 0.5 wt.% GNS (3) and 1 wt.% GNS (4) reinforced Al-Si coated 7075 aluminium alloy substrates acted as the working terminal with uncovered area of 1 cm2 in natural sea water electrolyte having conductivity of 5.6 S/m (siemens per meter). The electrode set-up comprised of 7075 aluminium alloy as anode, platinum electrode as counter terminal and standard Calomel electrode as reference cathode. The polarization estimations were carried out and polarization bends were testified by changing the potential of cathode naturally with a scan rate of 0.01 V/s from –1.045 V to –0.645 V potential range. The corrosion potential, (V) against Current density, (A/m2) was plotted (Tafel-plot) using Origin Pro software. In order to obtain the corrosion potential () and current density () for each of the working terminal specimen, the anodic and cathodic branches were extrapolated in the Tafel Plots. The corrosion potential, current density and anodic-cathodic slope obtained from polarization measurements and Tafel plots were further adopted in atmospheric galvanic corrosion simulation.

A one-dimensional numerical model was developed for bimetallic galvanic couple of AA7075 aluminium with AISI4340 steel with cathode to anode area ratio 1:1 using COMSOL Multiphysics 5.3 finite element package. The model geometry is as shown in Fig. 3. 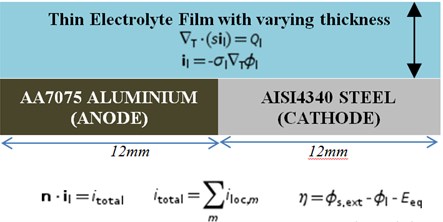 The following assumptions were made with respect to electrolyte:

1) Electrolyte film solution is in equilibrium with salt particles

In the current model, a one-dimensional Bezier curve was adopted to make the galvanic couple of AA7075-AISI4340. The thickness of the electrolyte film changes with respect to relative humidity and salt load density. The maximum film thickness was found at 100 % relative humidity [12].

The governing Nernst-Planck equation for transport of species , is as shown in Eq. (1):

where, is the flux of species, is the diffusion coefficient, is the concentration, is the charge, is the mobility of species , is the Faraday constant, is the electric potential and is the solvent velocity. As seen in the above Eq (1), species flux is function of diffusion, migration and convection.

For specifying the current distribution in electrolyte, two boundaries (1 and 2) were selected and electrolyte thickness and conductivity were defined. Electrolyte conductivity defines the dependence of current on potential gradient. The governing equation for electrolyte as per Ohms law was given by Eq. (2) and (3):

In case of AISI4340 steel which acts as cathode, oxygen reduction takes place on the electrode surface. This reaction is restricted by absorption of oxygen through electrolyte film. The limiting current density, (A/m2) is a function of film thickness, diffusivity and solubility of oxygen as per Eq. (5):

A normal mesh size was adopted with maximum element size of 1.61, minimum element size of 7.2 µm and curvature factor 0.3. The total number of elements was 50 with element ratio of 10. After developing the mesh, the current distribution study was simulated with different parameter levels of load density and relative density. Relative humidity was varied from 80 % to 98 % while the salt load density was varied from 0.0005 to 0.007 kg/m2. In the simulation, the maximum anode current density and average anode current density was analyzed as a function of relative humidity and salt load density.

The SEM images of ball milled powders (Al-Si with 0.5 wt.% GNS reinforced; Al-Si with 1 wt.% GNS reinforced) is as shown in Fig. 4 and Fig. 5. It can be observed that Al-Si powder reinforced with grahene has undergone flattening and fracture with increase in milling time. This can be attributed to brittleness developed in silicon and graphene. Also, the shearing effect with the kinetic motion of balls and powder causes the change is shape and size of the powders. The average size of the powders was observed to be 45 µm before ball milling process and it reached to 200 µm by the end of 5 h of milling time. Fig. 6(a) shows EDAX of aluminium, silicon and GNS dispersed in Al-Si after 1 hour of milling time. It is observed that graphene is uniformly dispersed in the matrix. 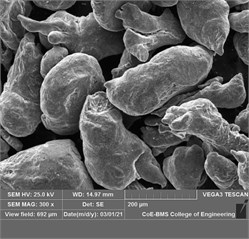 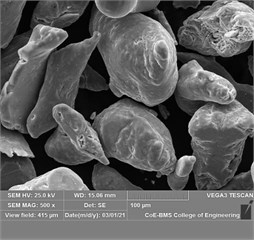 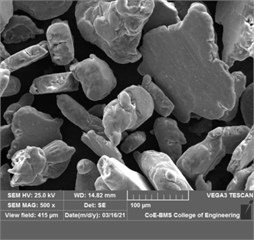 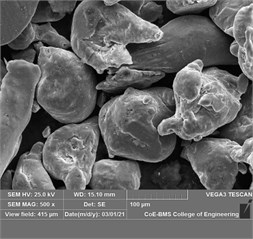 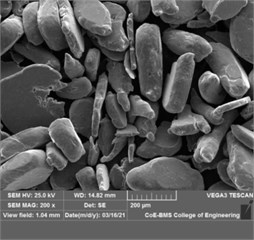 The potentiodynamic polarization study was conducted for coated and uncoated specimen in order to analyze the effect of coating on the corrosion behavior of the specimen in natural sea water medium. The Tafel plot is as shown in Fig. 7. It was observed that both cathodic and anodic branches were influenced by the GNS/Al-Si coating on AA7075 alloy. The presence of coating causes the changes in anodic dissolution of the metal and also the cathodic hydrogen reduction states of the metal. Also, the GNS/Al-Si coated specimen exhibited a significant shift towards positive state (noble state). The for uncoated specimen was obtained as –0.893 V while Al-Si with 0.5 wt.% GNS reinforced specimen exhibited –0.761 V. Also, the current density () of AA7075 uncoated specimen got reduced from 1.3×10-4 to 9.78×10-6 with the presence of GNS/Al-Si coating. 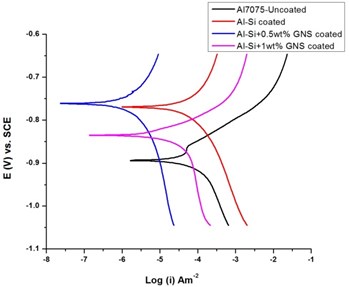 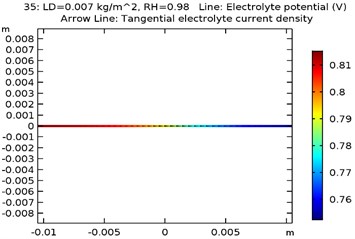 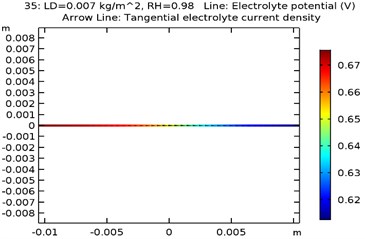 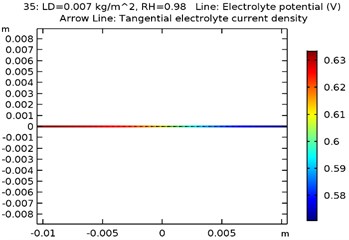 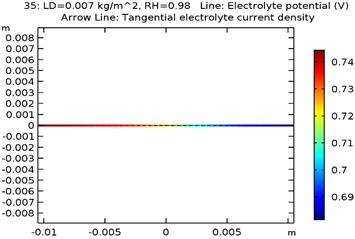 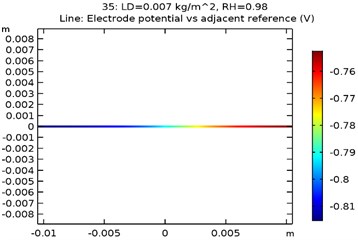 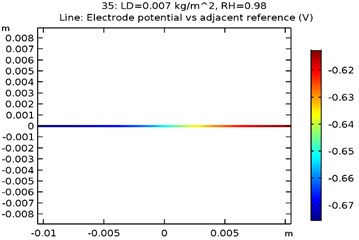 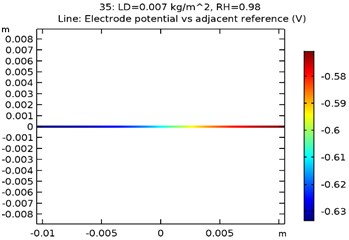 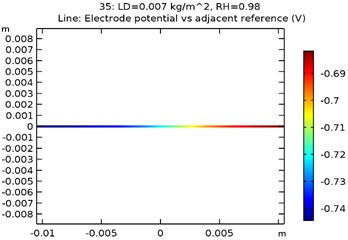 Fig. 10(a-d) depicts the maximum aluminium anode current density as a function of load density and relative humidity for the galvanic couple of Aluminium alloy and AISI4340 steel. It was observed that the maximum anodic current density decreased with increase in load density and increased with increase in relative humidity from 80 % to 90 %. 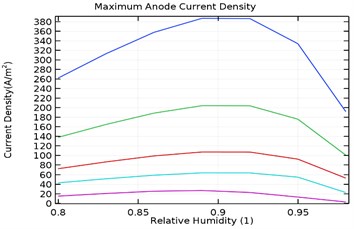 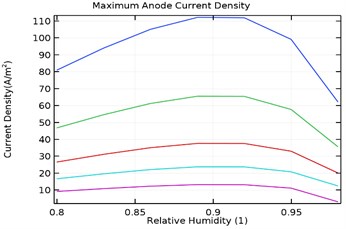 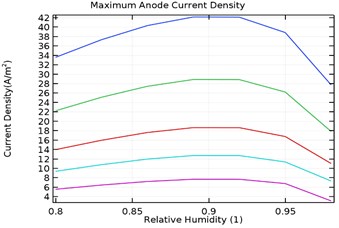 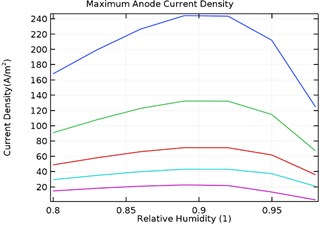 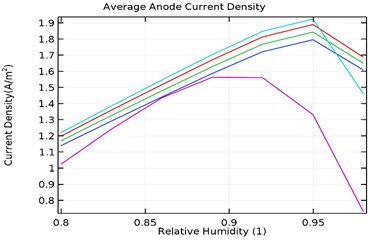 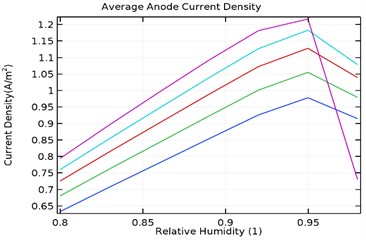 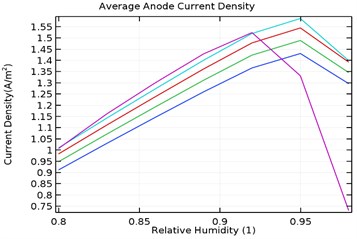 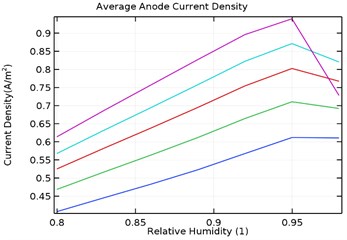