Copyright © 2022 Lishan Dong. This is an open access article distributed under the Creative Commons Attribution License, which permits unrestricted use, distribution, and reproduction in any medium, provided the original work is properly cited.

The problems of subgrade settlement failure and uneven settlement are quite prominent due to hydraulic migration. The loess in the natural state has the characteristics of high strength and low compressibility. Composite foundation method is to set a certain proportion of reinforcement (pile) in the natural foundation, so that the pile and soil jointly bear the load, and has the effect of compaction method and displacement method. Based on the actual case of a highway disease in Shanxi Province, this paper studies the influence of treatment measures of rotary jet grouting pile penetrating or not penetrating the loess soil on the uneven settlement of highway subgrade in loess region by means of field investigation, analysis and numerical calculation. The results found that the lateral friction resistance of rotary-jet grouting pile penetrates through the loess is small. When the rotarjet pile is long and the underlying soft layer is relatively thick (4.5 m), the settlement of the foundation also quickly enters the stable state. When the underlying loess is deep, the settlement of the foundation increases with time. 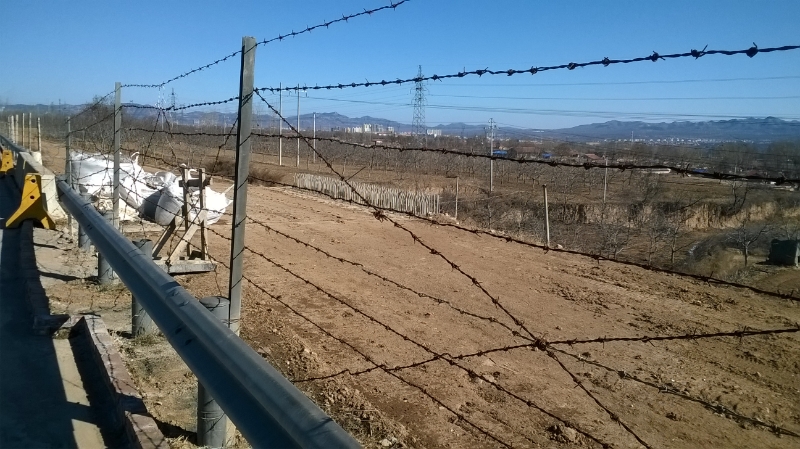 Shanxi Province, China is located in the temperate continental monsoon climate, four distinct seasons, rain and heat synchronization. The distribution of precipitation in the province is uneven with the seasons, the precipitation is relatively concentrated from June to August in summer, and the distribution of precipitation in the province is greatly affected by topography. The problems of subgrade settlement failure and uneven settlement are quite prominent due to hydraulic migration. The loess in the natural state has the characteristics of high strength and low compressibility. Once it is affected by water, the soil structure will be destroyed rapidly, additional subsidence will occur, strength sag will occur, and deformation will increase suddenly [1]. Because of the special properties of loess, various engineering diseases are common in road engineering. For example, the settlement of the high fill embankment is uneven, the bearing capacity of the foundation is low, and the roadbed cracks. The deformation and destruction of column foundation caused by load friction seriously harm the maintenance of roadbed.

Composite foundation method is to set a certain proportion of reinforcement (pile) in the natural foundation, so that the pile and soil jointly bear the load, and has the effect of compaction method and displacement method [2]. The specific methods are high-pressure rotary jet, powder jet pile, lime soil compaction pile and so on. High-pressure rotary-jet grouting method is to use a drill to drill the grouting pipe with a nozzle into the predetermined depth of the soil layer, and then spray the slurry or water from the nozzle at a pressure of 20-40 MPa to form a jet to impact and destroy the soil layer. The treatment of collapsible loess by high pressure rotary jet grouting can not only improve the bearing capacity of foundation soil, but also reduce the settlement. Consoli et al. [3] conducted triaxial compression and unconfined compressive strength tests for soil-cement characteristics, and the test results showed that the unconfined compressive strength of soil-cement increased linearly with the decrease of porosity of the mixture and the increase of cement content. Consoli et al. [4] analyzed several factors affecting the stiffness and strength of soil-cement and pointed out that the ratio of porosity to cement incorporation is a more appropriate index to evaluate the unconfined compressive strength and initial stiffness of soil-cement. Alamgira et al. [5] proposed a theoretical method to simply predict the deformation characteristics of pile and soil around pile after soft soil foundation is strengthened by gravel pile, lime pile, compacting sand pile or soil-cement pile.

According to the investigation, the rotary-jet grouting pile has good effect in most cases. However, some piedmont sections and multi-layer loess sections have too large settlement after construction. The reason for this phenomenon may be that the distance between geological holes is large, the geological changes of some piedmont sections are great, and the geological data do not fully reflect the actual situation. The pile length is designed according to the geological prospecting data, which leads to the situation that the pile hanging does not penetrate the loess layer. In addition, this phenomenon may also be found in the case of multi-layer interbedded loess areas, where multi-layer loess is distributed and the design only penetrates one layer, or the design scheme adopts suspended rotary-jet pile.

Therefore, based on the actual case of a highway disease in Shanxi Province, this paper studies the influence of treatment measures of rotary jet grouting pile penetrating or not penetrating the loess soil on the uneven settlement of highway subgrade in loess region by means of field investigation, analysis and numerical calculation, in order to provide reference for similar projects.

A highway was built according to the standard of two-way four-lane highway with a design speed of 80 km/h. It was officially opened to traffic on October 16, 2014. The geology along the road is mostly collapsible loess and red clay with weak expansibility. The terrain along the road is complicated, and it is hot and rainy in summer, and dry and snowy in winter. The climate difference is obvious. After its operation, Cokelin expressway was affected by loess subsidence, geological landslide and other adverse geological disasters, alternating changes of temperature and humidity environment, vehicle load and surface water erosion and other factors. Many diseases such as roadbed and pavement subsidence and slope water destruction appeared along the expressway, which seriously affected the road comfort and posed great potential safety risks.

The main disease form of roadbed along the line is subgrade subsidence. With the aggravation of roadbed disease, longitudinal or fan-shaped cracking, subsidence and middle zonal cracking occur on the road surface, as shown in Fig. 1.

Fig. 1. The subsidence of the subgrade caused the road surface to crack 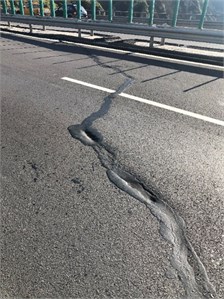 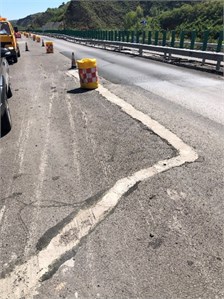 The main causes of roadbed diseases are as follows:

1) The area where the highway is located is dominated by loess, with typical collapsibility, permeability and macro porosity, which is easy to disintegrate in case of water. This special structure is beneficial to rainfall infiltration, and the cementation ability of the soil under the drainage system decreases after flooding, resulting in foundation settlement and deformation. In case of extreme rainfall, water flow will further cut away and form a cavity in the lower part of the protective engineering foundation, and soil particles will quickly mix with water to form mud, which will continuously wash the lower part of the foundation until damage occurs.

2) In the area where the highway is located, the loess vertical joints are developed and the gullies are deeply cut, so the slope is large, so some drainage ditches are designed with large slope. However, rainfall occurs frequently in summer, and it is a short period of heavy rainfall. The drainage ditches of large longitudinal slope promote the ability of water scour, resulting in intense erosion of soil at the foot of slope. If the surface runoff fails to discharge the ditch smoothly, the rainfall will overflow the ditch and scour the broken surface, forming secondary damage. In addition, part of the drainage ditch design is too long or small size, resulting in a large flow, cannot quickly discharge water; No reasonable protection and energy dissipation measures have been set up at the inlet and outlet of ditches, resulting in scouring and destruction at the inlet and outlet sections.

3) The damage of drainage channels of some road sections caused a large area of drainage to scour the slope, and the slope protection facilities were more than the protection capacity. After the drainage damage, the slope body suffered large area of soil erosion. Under the repeated erosion of rainfall for many years, the water flows back to the filling soil under the emergency driveway after the loss of slope soil, resulting in the settlement of the subgrade under the emergency driveway, thus causing the settlement of the road surface.

1) Rotary jet grouting piles are arranged according to the quincunx shape, with pile spacing of 1.5 m, row spacing of 1.3 m and pile diameter of 50 cm.

2) The use of water cement ratio of 1:1 (weight ratio) cement slurry, cement strength grade is not less than 32.5 Portland cement, add solid strength should not be less than 3 MPa.

The highway section was selected for numerical analysis, which was filled with 4.8m high soil and treated by rotary jet grouting pile. See Table 1 and Table 2 for the distribution and model parameters of cross-section soil layer. Loess adopts the elastoplastic model, and other foundation soil and embankment fill adopts the harden soil model. The established section is shown in Fig. 2.

4. Analysis of consolidation condition of foundation

Fig. 3. Variation curve of excess pore water pressure of soil along the centerline with depth (end of filling) 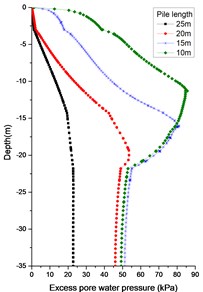 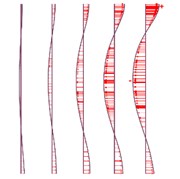 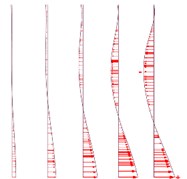 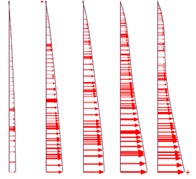 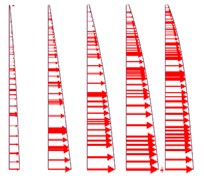 Fig. 7. Curve of settlement of foundation after construction with time