Copyright © 2022 Erdi Gülbahçe, et al. This is an open access article distributed under the Creative Commons Attribution License, which permits unrestricted use, distribution, and reproduction in any medium, provided the original work is properly cited.

In this study, a mode combination approach is proposed to place actuator/sensor pairs according to the experimental modal analysis results. The method is carried out by combining modes using the weighting coefficients with a finite element package program. First, this approach is applied to four different structures presented in the previous works in literature to compare and verify. Our results demonstrate that the determined best locations overlap well with the published results. Then, this combination approach is applied to the steel plate with bolt connections on four sides to determine actuator/sensor (a/s) pairs’ placement accuracy, which is directly related to experimental/numerical modal correlation. For this purpose, three different cases varying by weighting coefficients are determined to show the modal correlation's effectiveness. Finally, the possible best a/s positions for three cases are compared. In conclusion, the presented mode combination approach is a fast and practical solution for determining a/s pairs’ placement, and the experimental/numerical modal analysis correlation directly affects the placement's success. 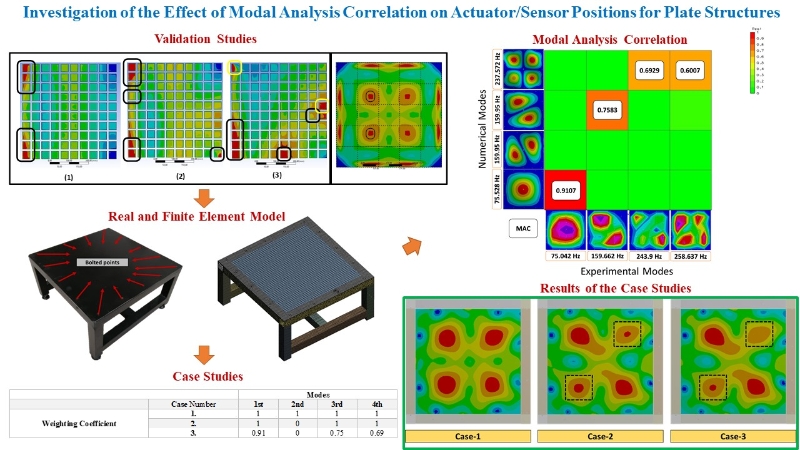 In this study, a new application for the actuator/sensor pairs’ best placement is proposed. This method combines modes using the Design Assessment Toolbox (DAT) of ANSYS/Workbench based on modal analysis results. DAT provides the ability to perform a combination of solutions for static, modal, harmonic, random vibration, response spectrum, transient dynamic, or structural analysis [18]. Thus, it is the process of combining one or more existing analysis results with the coefficients that can be determined. This method can also be defined as a more computable, faster, and more powerful mechanical combination solution. For this reason, DAT is an effective solution to combine numerical analysis of the structures. This study's approach combines only the natural modes obtained from numerical modal analysis to calculate the optimal locations.

Firstly, the validation studies are presented to the success of the proposed new approach. For this purpose, the different methodology offered by the researchers in [11, 17] related to the optimal actuator/sensor placement is examined in detail. As mentioned earlier, four different models presented in these studies are used to apply the mode combination using the DAT. The optimal locations of models presented in these studies and the best locations obtained from the mode combination method are compared to verify our methodology. Our results are overlap well with the published results. After the verification, the proposed mode combination application is carried out on the real structure. The steel plate with bolt connections on four sides is investigated to determine a/s pairs’ best placement. The experimental modal analysis was conducted in our previous study and compared with the finite element analysis (FEA) according to the Modal Assurance Criterion (MAC). In order to indicate that experimental/numerical modal correlation is directly related to the placement accuracy, three different cases are investigated.

2. The validation of the mode combination application

Firstly, Daraji and Hale [17] presented three different configurations that are handled. Our study uses these models by maintaining the dimensional, physical and mechanical properties to implement our approach. As is the reference study, one hundred pieces of the piezoelectric patch are bonded on the structure numerically. A finite model is obtained for coupled field analysis (for piezoelectric) according to the technique presented in [6]. The piezoelectric material properties are defined as provided in the reference study. The mode combination is applied to these models using the DAT after the numerical modal analysis in ANSYS. The six modes of the structures are combined using unit weighting coefficients by DAT in order to obtain the optimal location. After this, the equivalent strain responses are examined of these three structures. Accordingly, Fig. 1(a) depicts the possible optimal a/s positions of the three different plates with the proposed locations by [17]. 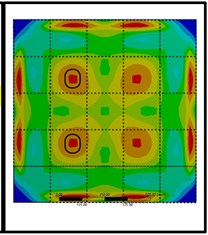 Second, Boz et al. [11] presented a numerical and experimental active vibration control study, where two piezoelectric patches are bonded on a steel plate clamped by four edges. One of the piezoelectric actuators is used as a control actuator, and the other is a disturbance actuation. In our study, the proposed structure by [11] is modeled by maintaining the dimensional, physical, and mechanical properties to implement our approach. As is the reference study, modal parameters of the first four modes are obtained to apply mode combination using unit weighting coefficients in DAT after the numerical modal analysis in ANSYS. Similarly, the equivalent strain response of the structure is investigated after the mod combination operation. Accordingly, Fig. 1(b) depicts the possible optimal a/s positions of the steel plate clamped by four edges with the proposed locations by [11].

3. Placement of actuator/sensors for plate structure with bolt connections

In this section, our approach called mode combination is applied to the steel plate with bolt connections on four sides to calculate the best a/s locations on the structure. The plate structure and the finite element model are shown in Fig. 2. 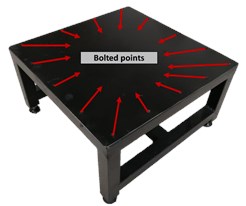 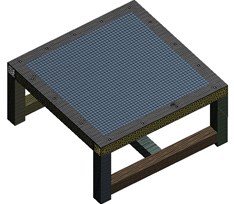 Table 1. Cases methodology for the investigation

In order to investigate the cases in this study, the experimental modal parameters of the steel plate with bolt connections on four sides were determined in our previous study [19, 20]. Also, the numerical modal analysis result was compared with the experimental results. LMS/VirtualLab software was used to compare the modal parameters as a result of the testing and finite element analysis (FEA). The Modal Assurance Criterion (MAC) values of the test and finite element model were calculated and shown in Fig. 3(b) with the mode shapes and natural frequencies as presented in our previous study [19, 20]. Our approach that mode combination method by using DAT is applied to the models of the cases as presented in Table 2 using different weighting coefficients.

Table 2. Weighting coefficients of all cases for the mode combination

Fig. 3. a) The equivalent strain responses of the cases, b) numerical and experimental modal analysis correlation [19, 20]

The mode combination method is applied by using the DAT of the Ansys/Workbench based on the modal analysis results for the presented cases. After performing the mode combination, the equivalent strain response is investigated to calculate the best a/s positions. Fig. 3(a) depicts the equivalent strain response of all cases. It is concluded that the red zones where the equivalent strain is the maximum are the best regions for multi-modal vibration control. In Case-1, when the first four modes are combined, higher strain zones have occurred in four locations. Therefore, the actuators/sensors can be placed on these zones to control the structure's first four modes of vibrations, thus realizing high-performance vibration control. When Case-2 and Case-3 are examined, a lower level of strain occurred in the regions marked in black due to the combination of three modes. These lower strain zones will provide lower control performance than other high zones considered the best placement.

This study conducted an approach for the best placement of the actuator/sensor pairs using the mode combination method based on the superposition theorem’s principle. In order to verify the method, applications of the studies were investigated in the literature. First, a study containing three different configurations has been proposed by Daraji et al. [17]. The optimal location results have been compared with the reference study to verify this study’s mode combination method, as depicted in Fig. 1(a). The results are observed to be overlapped when the verification is tested. Only the second and third plates' results are verified at the rate of 83.3 % when the six piezoelectric actuators are used. Only two positions are incompatible for these plates, as shown in Fig. 1(a), that can be attributed to the numeric values in the reference study. Besides, as a result of the mode combination method, two additional positions for the third plate are marked in Fig. 1(a) in yellow. According to equivalent strain, these locations, which are the highly concentrated regions, are presented in addition to the reference study. Second, a numerical and experimental active vibration control study was presented by Boz, et al. [11], where two piezoelectric patches are bonded on a steel plate clamped by four edges. The reference work is tested for verification; the results overlap, as depicted in Fig. 1(b). A success rate of 100 % is achieved by the mode combination method to verify the optimal positions.

Then, three cases (Case-1, Case-2, and Case-3) are examined to emphasize the importance of experimental modal analysis in best a/s placement based on numerical modal analysis. Fig. 3(a) is examined; it is observed how the best regions will change by combining the correct modes. The symmetric modes occur in the numerical analysis of symmetrical structures, especially plate-like, due to their nature. However, this is not the case in actual systems. Therefore, the verification of numerical analysis with experimental studies increases the value of the engineering problems’ solutions. In the studies presented in the literature, the optimal region determination studies proven with numerical applications should be supported experimentally. Otherwise, a different result may be obtained, as given in Fig. 3(a).

As a result, the presented method shows a fast and practical solution to the actuator and sensor for multimode vibration control. Further, the superiority of this method can be explained as follows.

1) Any optimization technique or formulation of the combining is not required. Equivalent strain regions are obtained by combining modal modes with the coefficients using the Design Assessment Toolbox. 2)The structural and dynamic analysis results such as random-vibration, harmonic-response can be combined with the modal analysis data results or each other. In this way, more realistic and more effective placement can be obtained. 3) It can be fastly adapted to changes (geometry, material, boundary condition, etc.).

This paper presents an efficient application to calculate the actuator/sensor pairs’ best locations, achieving higher performance active vibration control. The mode combination method is implemented to the four different structures to compare with the previous literature’s works. In conclusion, the mode combination method by using Ansys/Design Assessment Toolbox is an effective tool in numerical environments with all these compared results. Moreover, the experimental modal analysis correlation directly affects the placement in this approach. Therefore, the experimental verification should be realized, especially in symmetrical structures where symmetrical modes can be occurred. Even, it can be performed better by determining the location with model updates application in the complex models.

This study is carried out within the scope of the smart structure project supported by TUBA (Academy of Sciences of Turkey).