Copyright © 2022 Tingting Zheng, et al. This is an open access article distributed under the Creative Commons Attribution License, which permits unrestricted use, distribution, and reproduction in any medium, provided the original work is properly cited.

When a domestic electric vehicle is driving at a low speed on rough concrete roads, the front shock absorber produces ratting noise. Select BOB (Best of Best) and WOW (Worst of Worst) from the same batch of shock absorbers for road tests. The designed road test conditions are as follows: driving on a rough cement road at the proving ground at a constant speed of 20 km/h, to collect the vibration signal of piston rod top, displacement signal of the spring and noise inside the car, the sensors attachment locations is shown in Fig. 1 (Accelerometer (1) is located at the top of the piston rod; Accelerometer (2) is located on the wall; (3) is the displacement sensor; (4) is the microphone).

The LMS is used in this test which is a multifunctional data acquisition and analysis system, along with high-fidelity sound playback headphones, to ensure that the noise signal playback accurately reflects people's subjective feelings. Professional vehicle BSR noise evaluation personnel will score the shock absorber, and the scoring mechanism is carried out in accordance with the 10-point system BSR noise performance evaluation standard. BOB pieces scored 7 points on the 10-point system rattling noise evaluation standard, while WOW pieces scored 5 points.

The fast Fourier transform decomposes the signal into a sine function using trigonometric functions as the basis of the function space, converting the time domain signal to a frequency domain signal. The following is the conversion procedure:

The vibration spectrum of the piston rod, as shown in the figure above, can only see the difference between the vibration spectrum of the shock absorber piston rod with and without rattling noise: The vibration magnitude of the WOW parts is significantly greater than that of the non-BOB parts in the -direction 100-400 Hz frequency band, and the peak frequency is 250 Hz, but the time when the abnormal vibration occurs and the specific working stroke of the corresponding shock absorber cannot be determined. The noise in the driver’s ear is masked by other BSR noises and road noise, the difference between the spectrograms of BOB pieces and WOW pieces is not prominent in the corresponding frequency bands.

Fig. 2. direction of the top of the shock absorber piston rod (blue is WOW, red is BOB)

where is the input signal and is the window function, which is reversed in time and has an offset of samples. is a two-dimensional function of time and frequency , which connects the time domain and frequency domain of the signal, and we can perform time-frequency analysis on the signal accordingly.

The short-time Fourier transform is used to analyze the vibration signal at the top of the piston rod of the shock absorber. Since the accuracy of the time and frequency domain results of the short-time Fourier transform is affected by the length of the window function, the window function type in this paper is the Hanning window. The window function lengths are selected as 0.5S and 2S respectively for comprehensive comparison, and the time-frequency diagrams of BOB and WOW parts are obtained as shown in the following figures.

Fig. 4. Time-frequency diagram in the direction of the top of the piston rod of the BOB piece (0.5S)

Fig. 5. Time-frequency diagram in the direction of the top of the piston rod of the BOB piece (2S)

Fig. 6. Time-frequency diagram in direction at the top of the piston rod of the WOW piece (0.5S) 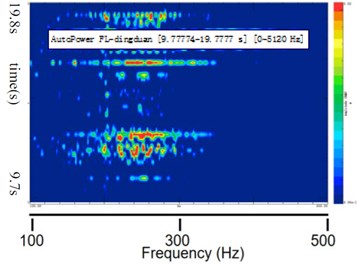 Fig. 7. Time-frequency diagram in direction of the top of the piston rod of the WOW piece (2S) 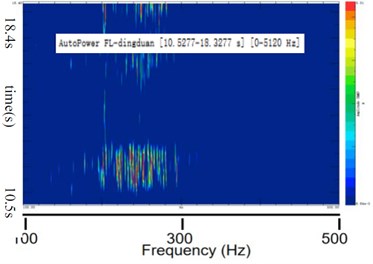 where is the mother wavelet or basic wavelet. Therefore, unlike the basis function of the Fourier transform, which is an infinitely long sine wave, the basis function of the wavelet transform is a finite-length wavelet that has been attenuated, and the wavelet basis function is localized in both the time domain and the frequency domain. Wavelet analysis decomposes the signal into the superposition of a series of wavelet functions. These wavelet functions can be used to approximate the sharply changing parts of the non-stationary signal, and can also approximate the discrete discontinuous signal with local characteristics, so as to reflect the original signal more truly change on a time scale. Since the wavelet transform can achieve an automatic harmony between frequency and time, it can realize the time-frequency multi-resolution function of the signal.

Fig. 8. Time-frequency diagram of the top -direction of the piston rod of the BOB piece

Fig. 9. Time-frequency diagram of the direction at the top of the piston rod of the WOW piece

The above figure shows that the vibration energy of WOW parts is much higher than that of BOB parts in the frequency band of 100-400 Hz, and the peak frequency is in the range of 220 Hz-350 Hz. This conclusion is basically consistent with the spectrogram obtained by Fourier analysis. Enlarging the time domain interval, it can be seen that the abnormal vibration of the WOW piston rod in the direction is between 13.47-13.48S. The data of 13.47-13.48S is found in the time domain signal of the WOW component in the direction. Combined with the displacement curve of the shock absorber, get Fig. 10.

1) Fourier transform can quickly and accurately analyze the spectral characteristic information of the shock absorber piston rod acceleration, but the time information corresponding to the frequency information cannot be obtained.

2) The short-time Fourier transform can roughly analyze the time-frequency domain characteristics of the shock absorber piston rod acceleration signal, but there is a problem in that the analysis accuracy in the frequency domain and the time domain cannot be achieved concurrently. The main peak frequency and corresponding time of the shock absorber rattling noise cannot be precisely locked.

3) The wavelet transform can precisely lock the peak frequency and occurrence time of the abnormal vibration of the shock absorber piston rod. Combined with the shock absorber displacement signal, the rattling noise source can be locked in the rebound valve in piston side and compensation valve in base side.