Parameter estimation of underwater propeller based on inverse Radon transform

Copyright © 2022 Tang Bo, et al. This is an open access article distributed under the Creative Commons Attribution License, which permits unrestricted use, distribution, and reproduction in any medium, provided the original work is properly cited. 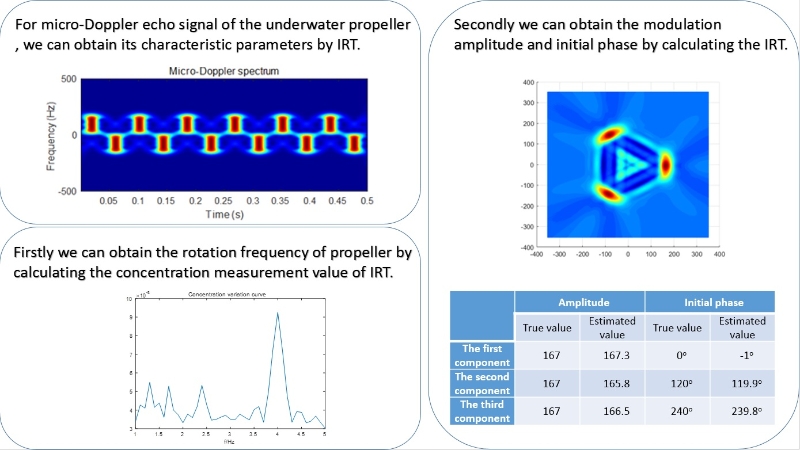 Due to the difficulty of obtaining target information, the problem of underwater target recognition has not been well solved [1]. At present, the detection and recognition of underwater target mainly depends on the distance, azimuth, speed and highlight echo of target. However, the method is easily affected by the natural environment, marine organisms and artificial interference.

To estimate the micro-Doppler parameters of rotating objects such as propellers, some adopt the method with variable step size which is out of work when the SNR drops below 5 dB [5]; Some adopt the rotor speed and size estimation method of four rotor UAV based on the combination of instantaneous frequency estimation based on Gabor transform and fast Fourier transform which is also not suitable for low SNR [6]; And based on the scattering point model based on rotor blade some choose SPWV time-frequency transformation method combined with image processing to estimate the speed and size of helicopter rotor, which is subject to the number of scattering points and low SNR [7]. The method based on inverse Radon transform (IRT) can overcome above defeats and better solve the problem of micro-Doppler parameter estimation [8, 9].

2. The micro-Doppler characteristics of propeller

Assume that the acoustic detection equipment emits a continuous wave signal with a frequency of [10], i.e.:

Considering the rotating motion of the underwater propeller, it is assumed that the spatial position relationship between the underwater acoustic detection equipment and the propeller is shown in Fig. 1. 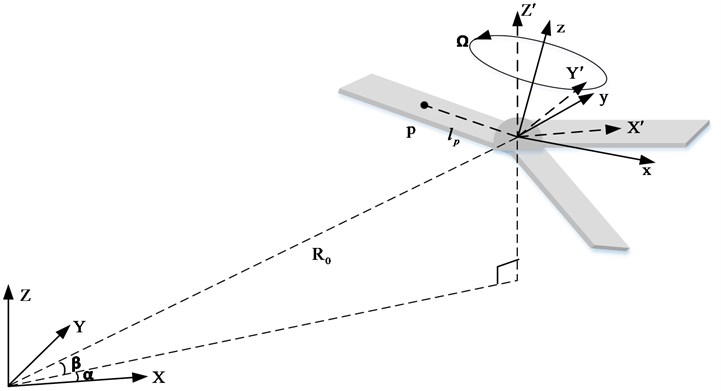 Assume that there is only propeller echo and the effects of reverberation and multipath interference are not considered, the echo signal of rotating propeller received by acoustic detection equipment is:

Then the baseband signal of propeller echo is:

Then the echo phase function of the scattering point of the th blade is:

The micro-Doppler frequency of the scattering point of the th blade can be obtained by deriving the phase function:

where is the wavelength of the transmitted signal [11].

Assume that the propeller has three blades, the acoustic detection equipment emits a single frequency continuous wave signal with a frequency of 100 kHz, the distance between the acoustic detection equipment and the origin of the target coordinate system is 100 m, and 0°, 0°, the Euler angle of the target coordinate system transformed into the reference coordinate system is , the blade length is m, the rotation speed is r/s, the target scattering intensity is , the initial rotation angles of each blade at the time are 0°, 120° and 240°, then the micro-Doppler spectrum of the propeller echo is shown in Fig. 2, in which the darker the color is, the greater the amplitude is.

It can be seen from the figure above that the micro-Doppler spectrum of propeller echo is a cluster of sinusoidal curves, in which the short line alternating at the peak position is the strong echo generated by the mirror reflection of the blade [12].

The projection of the 2-D function on the -axis is:

If the function is projected onto with a varying rotation angle , which is the Radon transform, that is:

where is the 2-D function in the rotating coordinate system , that is:

When all signal energy is concentrated at one point, the parameter estimation is very robust.

In order to realize the target recognition, it is usually necessary to obtain the physical and motion parameters of the target. For the propeller, that is, the speed of the propeller, the length of the blade, the number of blades and the initial phase of each blade, these parameters can be obtained by the frequency, amplitude, initial phase of the micro-Doppler spectrum and the number of energy points in IRT domain.

For the rotating propeller, the micro-Doppler spectrum is a cluster of sinusoidal curves, i.e.:

By comparing Eq. (12) and (14), it can be seen . So can be used to replace . From the analysis in the previous section, for the time-frequency image shown in Fig. 3, there will be at least one highly concentrated peak in the IRT domain. Its distance to the origin is the modulation parameter , and its angle is . In this way, the modulation parameters and can be estimated accurately in the IRT domain.

Based on the above analysis, the algorithm of IRT adopted in this paper is summarized as follows:

Step 1: for the signal with unknown modulation parameters, estimate its micro-Doppler frequency range, that is , and set the number of estimated components to 0.

Step 2: if the energy of the signal is not negligible or higher than the expected noise energy, set and repeat the following steps [20].

Step 4: set to equally spaced values between and . For each , calculate and the IRT of the time-frequency image .

Step 5: calculate the concentration measurement value of IRT for each and find the that produces the highest concentration.

Step 7: calculate the position of the maximum IRT value for and express it as and .

Step 8: estimate the modulation amplitude and phase of the th component:

Step 9: filter out the kth component by demodulating the current signal, i.e.:

Calculate the spectrum of the demodulated signal, and remove the component of zero frequency by setting and several adjacent points to 0. Then calculate and modulate it to eliminate the frequency shift of the residual component caused by demodulation [21]:

Assume that the emission frequency of the acoustic detection equipment is 10 kHz single frequency continuous wave signal, the detection equipment is 1000 m away from the target, the blade length 0.5 m, rotation speed 4 r/s and the initial rotation angle at the time are 0°, 120° and 240°, and 0°, the micro-Doppler characteristics of the propeller echo signal will be like what is shown in Fig. 3.

The concentration variation curve of micro-Doppler spectrum for frequency estimation is shown in Fig. 4. 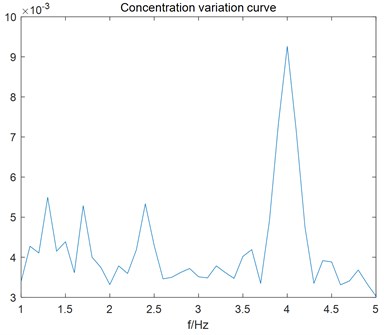 It can be seen from the figure above that the peak appears at 4 Hz, which is the propeller rotation speed. So, the frequency of micro-Doppler spectrum is accurately estimated.

Fig. 5 shows the IRT transformation results of micro-Doppler spectrum. There are three obvious peaks in the figure. Therefore, it can be determined that there are three blades. 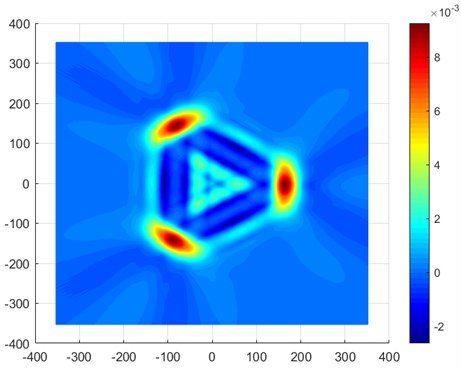 So, the characteristic parameters of micro-Doppler spectrum can be estimated, as shown in Table 1.