Transient three-dimensional magnetohydrodynamic flow of heat and mass transfer of a Casson nanofluid past a stretching sheet with non-uniform heat source/sink, thermal radiation and chemical reaction

Copyright © 2022 A. S. Odesola, et al. This is an open access article distributed under the Creative Commons Attribution License, which permits unrestricted use, distribution, and reproduction in any medium, provided the original work is properly cited.

This study considered the effect of chemical reaction on transient magnetohydrodynamic flow of heat and mass transfer of a Casson nanofluid past a stretching sheet with non-uniform Heat Source/Sink. The highly nonlinear partial differential equations governing the fluid flow alongside its boundary conditions are formulated and suitable similarity variables are introduced to transform the nonlinear partial differential equations into a set of coupled ordinary differential equations. The results revealed that as the Casson fluid parameter increases, the yield stress reduces thereby reducing the velocity, temperature, and concentration profiles. Magnetic parameter, chemical reaction parameter, stretching ratio parameter and unsteadiness parameter can be used to adjust the fluid velocity, temperature and concentration distributions. The effects of local skin friction coefficients, local Nusselt and Sherwood numbers are also shown and considered using tables. The results revealed that the unsteadiness parameter, Casson fluid parameter and magnetic parameter reduces the momentum boundary layer thickness along and direction. The work provides physical insight into the thermo-fluidic flow phenomena of Casson nanofluid under the impacts of magnetic field, internal heat generation and chemical reaction.

Chemical reactions with combined heat and mass transfer problems are important in many processes and have gotten a lot of attention in recent years. Heat and mass transfer occur simultaneously in processes such as drying, evaporation at the surface of a water body, energy transfer in a wet cooling tower, the flow in a desert cooler, fruit tree groves, and electric power generation. A chemical reaction between a foreign mass and a fluid occurs in many chemical engineering processes. These processes are used in a variety of industrial applications, including polymer production, ceramics and glassware manufacturing, and food processing [1].

The flow application of non – Newtonian fluids are evident in polymer devolatization and processing, wire and fibre coating, heat exchangers, extrusion process, chemical processing equipment, etc. [2]. Combining heat transfer with the concept of stretching flow is vital in these areas of application. It is well known fact that the fluids appear in industrial and engineering processes are mostly non – Newtonian fluids [3]. The materials that falls into the category of non – Newtonian fluid include sugar solution, colloidal and suspension solution, honey lubricants, etc. the properties of such materials cannot be explored by simple Navier Stokes equations. In the category of non – Newtonian fluid, Casson has a distinctive features [4]. Casson fluids are Jelly, honey, protein, Human blood and fruit juices. Concentrated fluids like sauces, honey, juices, blood, and printing inks can be well described using this model [2]. Non – Newtonian fluid exhibits nonlinear relationship between the shear stress and rate of shear strain [5]. The study of heat transfer in the stretched flow is important because of its extensive application in chemical engineering. Several processes in chemical engineering including metallurgical process and polymer extrusion process involved cooling of molten liquid being stretched into a cooling system, glass fibre and paper production [6]. The quality and final product formation in such processes are dependent on the rate of cooling and stretching [7]. The combined heat and mass transfer problems with chemical reactions are of importance in many processes and therefore have received a considerable attention in recent years. The heat transportation analysis in view of the non – Newtonian fluids have achieved a great significance in technology and science applications like production of synthetic liquids, electro rheological liquid, biological liquids movement, plastic products manufacturing through extrusion, chemical in district (heating/cooling) etc. [8]. It has attracted the attention of new researchers due to their huge range of practical applications in engineering, science and industries [1- 4]. Casson fluid is classified as the most popular non – Newtonian fluids which has several applications in food processing, metallurgy, drilling operations and bio – engineering operations [9]. Human blood, jelly, honey, concentrated fruit juices, tomato sauces are some examples of Casson fluid [1].

2. Mathematical model of the problem

We consider a transient, three-dimensional, heat and mass transfer, viscous incompressible, laminar, MHD boundary layer flow analysis of a Casson – nanofluid over an inclined stretching sheet in porous media was considered, as shown in Fig. 1. The fluid flow is caused by the multidirectional stretching of the sheet moving in its own plane with having surface velocities , and , where , (stretching rates) are positive constants. The fluid has no lateral motion as . Influences of Brownian and thermophoretic diffusion are considered in the transport equations. Physical properties of the fluid are assumed to be constant. The velocity components of ,and are , and respectively. and are convective surface temperature and ambient temperature and and are the concentration of the fluid at the surface of the sheet and ambient concentration respectively.

The constitutive equation of state for an isotropic and incompressible Casson fluid is as follows [17-18]:

here is the th component of the stress tensor, is the plastic dynamic viscosity of the non-Newtonian fluid, is the yield stress of the fluid, is the product of the component of deformation rate with itself , is the component of deformation rate, is the critical value of product based on non-Newtonian model, is the Casson parameter. Under the above assumptions. Using the Oberbeck Boussinesq and boundary layer approximations, the governing equations describing the continuity, momentum, energy and concentration for the three – dimensional transient flow problem are can be written in Cartesian coordinate is given by [17]:

The associated boundary conditions are as follows:

Employing the Roseland diffusion approximation, the radiative heat flux is given by:

where represents the Stefan – Boltzmann constant, denotes the Rosseland mean absorption coefficient. The temperature difference within the flow are assumed to be sufficiently small so that , may be expressed as a linear function of , and can be expanded by using Taylor’s series about , as follows:

and neglecting the higher order terms beyond the first degree in , we get:

Finding solution to the set of Eqs. (2-6), following similarity variables are introduced as given by [24]:

And the boundary conditions are:

where , are thermal and the solutal Biot Numbers respectively.

The non – dimensional variables are:

where and are the wall shear stress along and – directions respectively and are the heat flux and mass flux at the surface respectively. Applying similarity variables into Eqs. (16-18), the following are obtained:

where is the local Reynolds number based on the stretching velocity.

According to [22], the exact solution for the set of nonlinear differential equations alongside its boundary conditions are not possible and thus we employ a numerical method known as finite element method (FEM). This method has been applied by various researchers [25-28].

The Garlekin global finite element model of the equations for the th element thus formed is given in matrix form as follows:

The element matrix given by Eq. (21) is of the order 18×18 and the whole domain is divided into a set of equations a matrix of order 9606×9606 is obtained. The system of equations obtained is nonlinear and therefore an iterative scheme (Gauss - Siedel method of successive relaxation) is used for solving it. After the imposition of the boundary conditions, the system of equations left is solved. Once the convergence criterion is satisfied, where stand for either , , , , , and represents the iterative step, the iterative process is terminated.

The simulations of the developed numerical solutions are presented in this section. Table 1 presents the values of the surface skin friction, Nusselt number and Sherwood number obtained for different variations of the governing parameters are tabulated. Casson fluid parameter is seen to increase in direction and decrease in direction. Magnetic parameter shows an opposite behaviour that is it decreases in both directions. The rate heat transfer and mass transfer are observed to increase for increasing values of Casson and Magnetic field parameters. Also, it is observed that as the chemical reaction parameter increases the surface skin fiction increases in and decreases in direction. The Nusselt number and Sherwood number are enhanced by various values of the observed parameters enhanced. The table shows that increasing Prandtl number increase the local Nusselt number and decreases the Sherwood number. 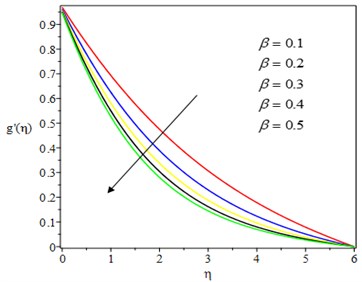 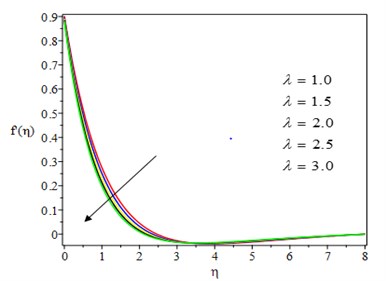 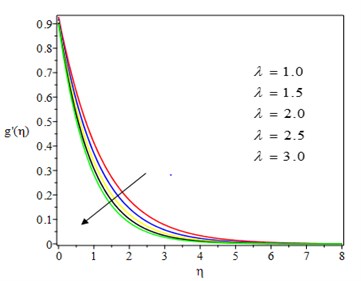 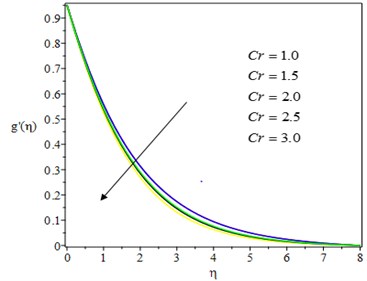 Fig. 5. Effect of Casson parameter on the temperature profile 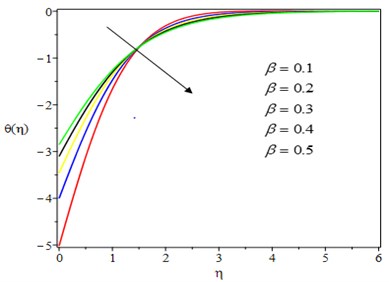 Fig. 6. Effect of chemical reaction parameter on the temperature profile 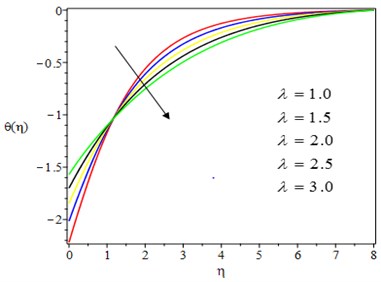 Fig. 8. Effect of Casson parameter on the concentration profile 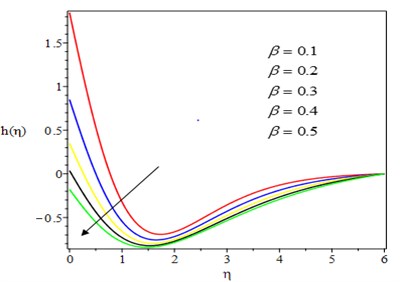 Fig. 9. Effect of Chemical reaction parameter on the concentration profile 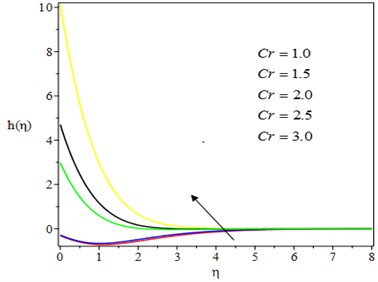 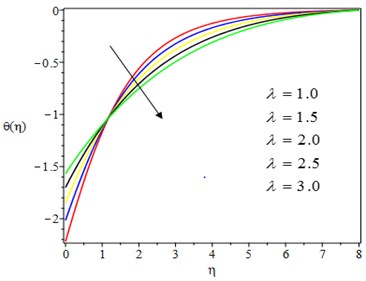 Transient analysis of a three-dimensional, heat and mass transfer, viscous incompressible, laminar, MHD boundary layer flow analysis of a Casson – nanofluid over a stretching sheet in porous media was considered. The system of highly nonlinear partial differential equations is reduced to a system of ordinary differential equations through appropriate existing similarity transformation. The resulting equations are solved through Garlekin finite element method. The results obtained through FEM are verified by other numerical solutions via Runge– Kutta fourth - order integration scheme.

The following are the findings from the study:

1) The momentum boundary layer reduces as the Casson parameter increases and the velocity profile is enhanced.

2) The unsteadiness parameter can be used to adjust the thickness of the momentum boundary layer and as well as the thermal boundary layer.

3) The concentration profiles are highly influenced and are decelerated with higher value of chemical reaction parameter.

4) The Nusselt number depreciated, and Sherwood number increases with the higher values of chemical reaction parameter.

4) The heat transfer rate can be enhanced by varying the value of the magnetic field.

5) Increase in the unsteadiness parameter also increases the skin friction coefficients, heat transfer rate, and as well as the mass transfer rate.