Copyright © 2022 Xiaohua Liang, et al. This is an open access article distributed under the Creative Commons Attribution License, which permits unrestricted use, distribution, and reproduction in any medium, provided the original work is properly cited.

Aiming at the problems that the three-direction uniaxial sequential vibration test cannot effectively simulate the real launch environment of the satellite, and the high cost of the multi-axis shaker and the limitation of engineering application, the multi-axis vibration test scheme based on vector-fixture is proposed. Taking the vibration magnitude of uniaxial vibration test on the satellite mounting surface as equivalent reference, the appropriate vector direction is determined to carry out vector-fixture design. By analyzing the multi-axial vibration test data of the real structure of a satellite, it can be seen that: The “satellite-fixture” mounting surface can reach the set vibration magnitude at low frequencies, and undertest occurs at high frequency due to structural resonance and other factors; By optimizing the control strategy, the degree of over-test and under-test in the three directions can be balanced. According to the mission characteristics and development cycle of micro-nano satellites, this paper provides an efficient vibration test scheme. 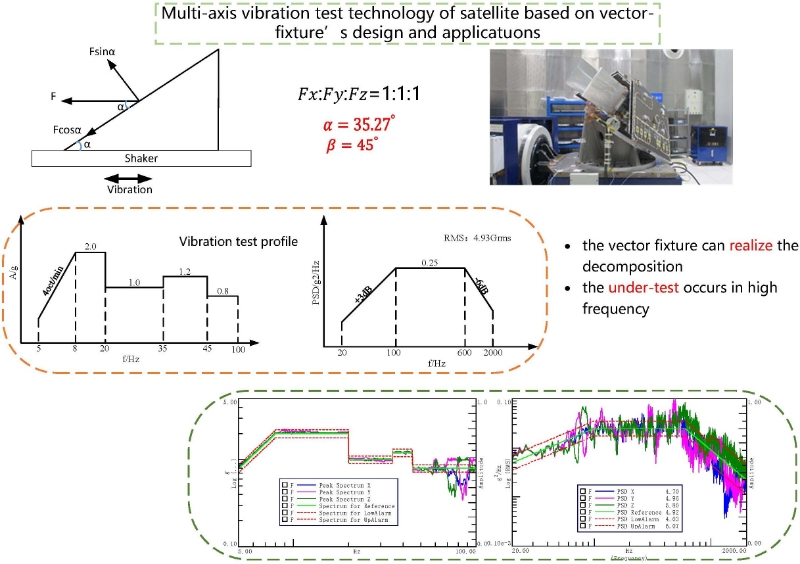 Satellites have to withstand harsh vibration environments during transportation, launch and flight stages. The real dynamic environment often occurs simultaneously in multi-axis, and the vibration magnitudes in each direction are different. Basically, the flight direction of the satellites has the largest vibration magnitude, and the other two orthogonal directions are much smaller [1]. Due to practical constraints such as the complexity and high cost of the multi-axis shaker and the immature test standard of multi-axis vibration [2], the satellites vibration test usually uses a uniaxial shaker to conduct uniaxial vibration tests in three directions in sequence to simulate the multi-axis vibration environment actually experienced [3]. Liu et al. conducted uniaxial and multiaxial vibration tests on typical specimens, and the results show that multi-axis simultaneous vibration has obvious multiaxial effects compared with uniaxial sequential vibration fatigue tests, which can lead to structural fatigue failure, electrical connector loosening, etc. [4].

The multi-axis vibration realizes simultaneous vibration in three directions through one installation and loading, while reducing the number of disassembly and hoisting, and greatly improving the efficiency of the test [1]. In recent years, with the development of low-cost, fast-delivery micro-nano satellite development technology, it is urgent to use technologies such as multi-axis vibration to quickly complete the test tasks. Multi-axis vibration research is mainly based on multi-axis shaker to carry out the control technology research of MIMO system. However, the actual engineering implementation is difficult, the equipment cost is high, and many shortcomings are exposed in use. For example, the upper frequency is determined by the transmission characteristics of the connecting ball joint, the coordinated control of multiple shakers is difficult when the structure is complex. As a result, multi-axis testing is only suitable for small, simple stand-alone products for vibration testing [5]. In this paper, the multi-axis vibration technology based on vector-fixture is studied. Through the application of the traditional uniaxial shaker and the vector-fixture, the simultaneous vibration of the three orthogonal directions of , , and can be realized, and the real vibration environment can be simulated more efficiently and realistically, which create new research ideas and approaches for product reliability assessment, and lay a certain research foundation for the practical application of multi-axis vibration.

The multi-axis vibration test system based on vector-fixture can be described as a single-input, single-output system shown in Fig. 1. The driving signal of the system is decomposed by the vector fixture () to produce the qualified response output signal at control points.

The transfer function of the system is determined by the frequency response characteristics of the vector fixture, which is the key link of the system. Assuming that the multi-axis vibration test system based on vector-fixture is a linear time-invariant system, the input and output signals of the system can be expressed in the frequency domain as:

Ideally, in is a fixed value that does not vary with frequency, given by the vector-fixture design characteristics. In practical engineering applications, affected by the design results of the fixture, it is difficult to ensure the stable transmission of the frequency response in the full frequency band, which leads to the uneven response caused by resonance and anti-resonance in different control points and different frequency.

The vibration fixture is mainly used to realize the connection between the satellite and the shaker. Compared with the traditional fixture, the vector-fixture can further realize the decomposition of the acceleration magnitude according to the design proportion and the conversion of the driving direction.

Similarly, when the direction is parallel to the base of the vector fixture, as shown in Fig. 3. It is assumed that the conditions in , and directions of the satellite are identical, i.e. , then: 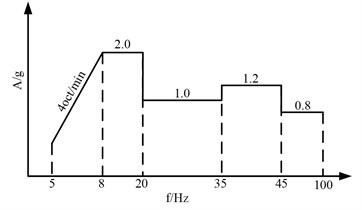 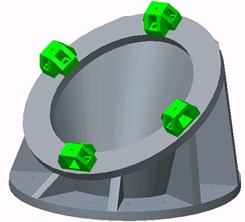 4.2. Decomposition results of the Vector-fixture

The satellite is fixed on the horizontal slide of the shaker by the Vector-fixture, as shown in Fig. 6. Four triaxial acceleration sensors, which are parallel to the satellite coordinate system, are pared on the “satellite-fixture” mounting surface for vibration closed-loop control, while collecting the decomposed acceleration values of the vector-fixture on the mounting surface.

The sinusoidal vibration test is carried out according to the conditions shown in Fig. 4(a), and the control strategy adopts two control modes: “X&Y&Z direction four-point maximum control” and “X-direction four-point maximum control +Y&Z direction quasi-identification magnitude response limit”. The vibration magnitude decomposition results on the satellite installation surface are shown in Fig. 7(a)-(b). The peak spectrum of , and shown in the figure are the result after the data of the four control points are processed according to the maximum control algorithm. 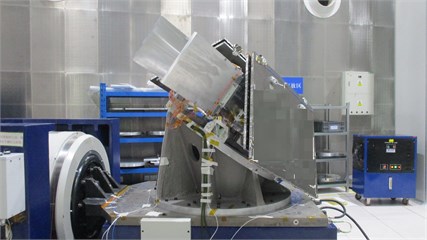 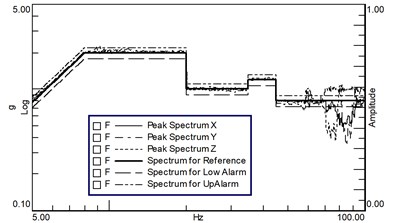 Affected by the modal characteristics of the fixture and the “satellite-fixture” coupling characteristics, the acceleration decomposition of the fixture failed to be smoothly and uniformly realized in the sinusoidal vibration test. The required test conditions and tolerance limits were not exceeded in the whole frequency band, but undertest occurred at high frequencies above 70 Hz. By changing the control strategy, undertrials can be reduced, but not eliminated completely. 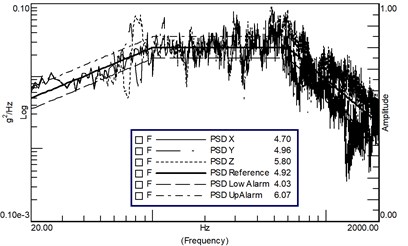 The random vibration was carried out according to the conditions shown in Fig. 4(b), and the control strategy was the same as that of sinusoidal vibration. Firstly, the mode of “X&Y&Z direction four-point maximum control” was adopted. The vibration decomposition results of the satellite mounting surface are shown in Fig. 8(a). Except for a few frequency points, the spectral density is basically within the upper limit of the test tolerance, but the spectral density of the high frequency band is seriously undertested, and the RMS value of the direction and direction is undertested. Just like the sinusoidal vibration, the PSD of , and shown in the figure are the result after the data of the four control points are processed according to the maximum control algorithm.

By optimizing the control strategy and adopting the method of “four-point maximum control +Y&Z direction quasi-identification magnitude response limit”, the degree of over-test and under-test of the spectral density in the three directions is balanced, the total RMS value in the Z-direction exceeds the acceptance level but does not exceed the identification level, and the total RMS value in the and directions is within the tolerance limit of the test conditions, as shown in Fig. 8(b) (The 90 Hz peak is the satellite first-order mode, which can be limited within the tolerance by the under-concave control strategy).

In order to analyze the effect of multi-axis vibration test method based on vector fixture, this paper takes a real satellite structure as an example to carry out three-axis vibration test based on vector-fixture. The measured data show that the vector fixture can realize the decomposition of acceleration in three axial directions, and the decomposition results in low frequency meet the design requirements, while the under-test occurs in high frequency due to the coupling effect of “satellite-fixture” modal characteristics. In the future, the fixture design scheme will continue to be optimized to reduce the coupling influence of “satellite-fixture” and achieve uniform decomposition in a wider frequency range.