Copyright © 2022 Alexey Zotov, et al. This is an open access article distributed under the Creative Commons Attribution License, which permits unrestricted use, distribution, and reproduction in any medium, provided the original work is properly cited.

The Paper is devoted to the construction and study of a mathematical model of plate vibrations in the incoming flow of the medium. A system with two degrees of freedom was investigated. Within the framework of the proposed mathematical model, stable modes of plate vibrations are obtained, in which the horizontal aerodynamic force acting on the plate is directed against the incoming flow. In this case, the angle between the velocity vector of the pressure center of the plate and the plate itself is almost constant.

It is known that the drag forces of vehicles are proportional to the square of their speed. For modern vehicles, due to their high speeds, this problem is quite acute. In this paper, an attempt is made to obtain the pulling force of an oscillating plate directed against motion. Then, for cars in the future, it is possible to create such systems with oscillating plates that will repeatedly reduce the resistance forces depending on the speed of movement. Research in this direction may prove promising for the transport industry, which may arouse the interest of oilmen.

In the proposed work, the “plate-frame” system with two degrees of freedom is considered: it can rotate around the center of mass, which moves in a straight line. The restoring force and the restoring moment are directly proportional to the movements. The aerodynamic forces applied to the body are assumed in accordance with the empirical theory of stationary flow around a flat plate. It is assumed that the pressure center of the plate is movable and is located at some point A, the position of which is determined by the dependence of the distance to it from the center of mass of the plate, which is determined by blowing rectangular plates in the wind tunnel [12] and depends on the angle between the velocity of point A and the plate itself. The aerodynamic forces acting on the plate are decomposed into two components: the drag force directed against the velocity of point A relative to the flow of the medium, and the lifting force directed orthogonally to it.

In this article, for the first time, stable modes of plate oscillations with two degrees of freedom are numerically obtained, at which there is a pulling force directed against the flow of the medium, which was predicted by M.V. Keldysh. and Lavrentiev M. A. in the 40 s of the last century. The results obtained can be very useful for vehicles, since additional power is required to decreasing of aerodynamic drag forces for various types of vehicles, such as truck, airplane, train, ships and so on. It can lead to significant fuel economy.

Fig. 1 shows plate 1 in a fluid (air) flow with the center of mass at point . It is rigidly connected to the frame 2. The center of mass of the "plate-frame" system due to the counterweight 3 (point ) is at point (0). This point is connected to the fixed base by linear springs 4 and can move in a straight line. In addition, at this point the plate is connected to the torsion spring 5. A fixed coordinate system is used. A moving coordinate system is rigidly connected to the plate. The plate at rest is in equilibrium and is oriented towards the flow. The restoring force and the restoring moment of springs 4 and 5 are directly proportional to the corresponding deviations:

The material of the plate is not important in this study, the plate is taken rigid and thin. Elongation, the ratio of the width of the plate to its length is assumed to be 8. The geometric dimensions of the plate are given in [12]. Self-oscillations of a plate with large amplitudes arising in a stationary air flow are investigated.

More detailed symbols and abbreviations are presented in the nomenclature. 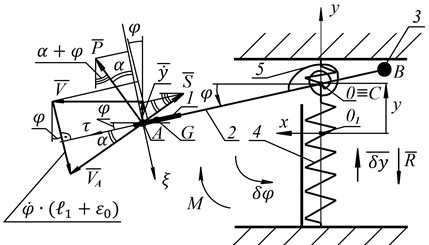 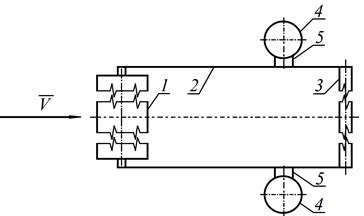 Fixed coordinate system and a movable coordinate system , rigidly connected to the plate is introduced. In the resting position, the plate is in equilibrium and oriented towards the flow. Gravity forces are directed perpendicular to the drawing. The restoring force and the returning moment of springs 4 and 5 are directly proportional to the corresponding deviations: ; .

The values of aerodynamic forces and acting at point are equal to:

where 1,225 kg/m3 is the air density; is the plate area; – angle of attack between the vector and the plate; is the velocity of point of the plate; , – dimensionless aerodynamic functions (Fig. 1(a)).

Projection of the velocity vector to -axis:

Projection of the velocity vector to -axis:

The form of aerodynamic functions for different shapes of plates is given in [12]. The schemes in cases of Fig. 2(a) and Fig. 2(b) show such dependences for a plate with elongation. These dependences are approximated in the first order by the analytical functions (case Fig. 2(c) and Fig. 2(d)). 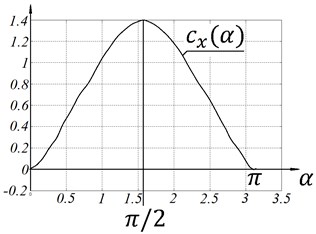 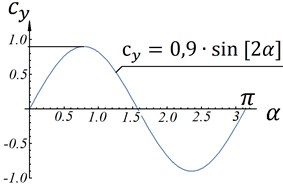 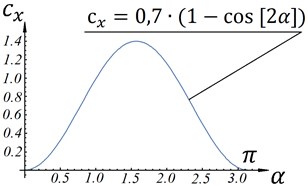 The velocity of point is determined as the sum of three vectors (Fig. 1(a)):

where is the velocity of point 0; V is the air flow rate; is the angular velocity of the plate; .

The pressure center of the plate, point A, is considered to be mobile, and the distance GA is described by the dependence , which is determined from blowing rectangular plates with a given elongation in a wind tunnel and is experimental data [12]. To determine the angle , we determine the tangent of this angle by projecting the components of the vector (2) on the axis and . We accept the change in the projection on the -axis during plate vibrations as insignificant in relation to the value and consider that :

The scheme in Fig. 1 was chosen from the condition of simplifying calculations. With such a scheme, to determine the angle , a numerical solution of Eq. (3) is not required (if the function would be instead ) and Eq. (4) can be used:

The system in Fig. 1 has two degrees of freedom. Let us write the Lagrange equation of the second kind for the coordinates and :

where is the kinetic energy; , are the generalized forces in the corresponding coordinates.

The kinetic energy of the system is determined by the following formula:

To determine the generalized forces and, we equate the corresponding variations and to zero . Then:

Finally, we obtain the following differential equations describing the oscillations of the system in Fig. 1:

The system of differential Eq. (7) was solved numerically in the Wolfram Mathematica mathematical package.

We project the aerodynamic forces and acting on the plate on the -axis (Fig. 1):

Analysis of solutions of differential Eq. (7) showed that there are stable modes of oscillations (frequency and amplitude of oscillations do not change with time) of the system in Fig. 1 in which the horizontal aerodynamic force is directed against the oncoming flow (Fig. 3 (a)). Due to the incommensurability of the magnitude and the magnitudes and , the dependencies 1000 and 0.01 are presented in Fig. 3 for clarity. If the flow velocity is 89 m/s then oscillations qualitatively change their form, and the horizontal force becomes negative (Fig. 3(b)). As can be seen from Fig. 3(b), the absolute value of force increases by several orders of magnitude. For a case Fig. 3(a) the angle according to Eq. (4) is almost equal to 0 (it changes from –3∙10-6 to 3∙10-6 rad.). For a case Fig. 3 (b), the angle also remains almost constant with time and equals approximately –0.133 rad. 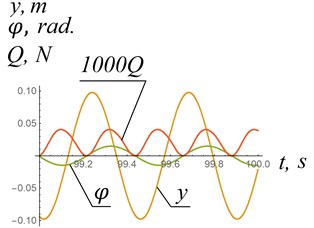 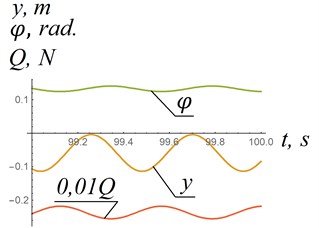 With a further increase in the velocity , the practically constant angle decreases. For example, at 100 m/s –0.82 rad. At 127 m/s the numerical solution of Eq. (7) failed, the coordinates and tend to infinity. The nature of this failure is not clear at the moment. Additional research on this topic is required.

The natural frequencies of the “plate-frame” system (Fig. 1) for the case shown in Fig. 3(a) are as follows: 14.1973 s-1; 14.1956 s-1. At these frequencies, the oscillations are steady. When these natural frequencies change, the vibrations of the plate, at which there is a “pulling” force directed against the flow, disappear. With certain parameters of the system in Fig. 1, resonance is possible ( 0 (Fig. 4(a)). Also damped oscillations are possible ( 0, Fig. 4(b)). 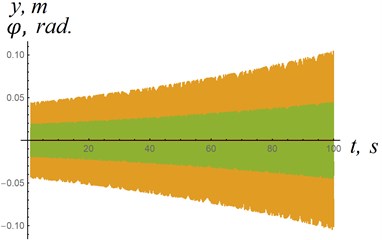 a) Resonance in the system in a case 5 kg 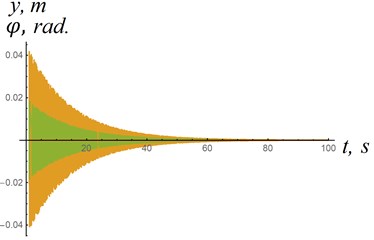 b) Damped oscillations in the system 5.5 kg

In conclusions two main theses can be underlines.

The first thesis: within the framework of the proposed mathematical model, there are stable oscillation modes of the considered system with two degrees of freedom, in which the horizontal aerodynamic force acting on the plate is directed against the oncoming flow.

The second thesis: in the proposed mathematical model resonance and damped oscillations are possible.

The third thesis: there are stable modes of oscillation, in which the angles of attack between the velocity vector of the center of pressure of the plate and the plate itself are practically constant.