Copyright © 2022 U. G. Borisova, et al. This is an open access article distributed under the Creative Commons Attribution License, which permits unrestricted use, distribution, and reproduction in any medium, provided the original work is properly cited.

New methods and ways of using heterogeneous zeolite catalysts – H-Y, H-Beta, H-MOR, H-ZSM-5 and micro- meso-porous – H-Ymmm and others in organic synthesis were studied. Using the example of available petrochemical compounds such as polyols, olefins, and dienes, the possibilities of carrying out cyclization and condensation reactions in the presence of zeolites of various structural types are shown. It has been established that the H-Beta zeolite catalyst provides a quantitative yield of ethers and esters during the interaction of olefins – substituted vinyl-gem-dichlorocyclopropanes – with linear alcohols and acids, respectively. It has been determined that the condensation of styrene and an equimolar mixture of 4-hydroxymethyl-1,3-dioxolane and 5-hydroxy-1,3-dioxane in the presence of the H-Beta catalyst proceeds with the formation of ethers, while the ratio of 5 and 6-membered isomeric products = 1.2:1. Multicomponent condensations successfully proceed in one stage in the presence of wide-pore zeolites.

The cyclic acetals and their derivatives are widely use in organic synthesis and find application as a component of solvents, plasticizers, anti-oxidants, inhibitors of the corrosion, bio-effecting agents and etc. [1-3]. Acid-catalyzed condensation of the carbonyl compounds with polyols and cyclization of olefins with formaldehyde (the Prince reaction) are basic manufacturing and preparative directions of creating the cycloacetal structure.

In the literature, there is no generalization and systematization of the results of studying waste-free energy- and resource-saving methods for the synthesis and transformation of cyclic acetals and gem-dichlorocyclopropanes. It was of interest to analyze the available data in terms of their prospects in the preparative synthesis of polyfunctional carbo- and heterocyclic compounds.

This review focuses for the first time on the efficiency of using heterogeneous catalysis methods for the preparation and conversion of cyclic acetals and gem-dichlorocyclopropanes.

We studied the capability of replaced the homogeneous catalysts by zeolites of different modification in this process. This type of perspective heterogeneous catalysts has proven themselves in the isomerization, alkylation, condensation reactions etc. because allows selecting and using the zeolites with required characteristics (size of pores, geometry of channels and acidity) [4-6].

The qualitative and quantitative compositions of the reaction masses were determined using mass spectrometry (using a Chromatek-Kristall 5000M device with the 2012 National Institute of Standards and Technology, USA database) and nuclear magnetic resonance spectroscopy (using a Bruker AM-500 device with operating frequencies of 500 and 125 MHz).

In literature [7, 8] was defined influence of carbonyl compounds structure (formaldehyde, aldehydes, acetone) on total yield of cyclic acetales and ratio of 5 and 6-unit heterocycles’ formation.

It was fond that periodic or continuous condensation of different polyols (ethylene glycol, 1,2 and 1,3-propyleneglycol, glycerin etc.) with carbonyl compounds on acidic zeolites and molecular sieves, which able to absorb aqua, at 120-180°С in 1-4 hours, leads to appropriate 1,3-dioxacycloalkanes with virtually quantitate yield (Fig. 1). While the solvent not required, co-products absent, the stage of neutralization disappear, the catalyst can be use many times without regeneration.

Fig. 1. Condensation of ketones and aldehydes with polyols 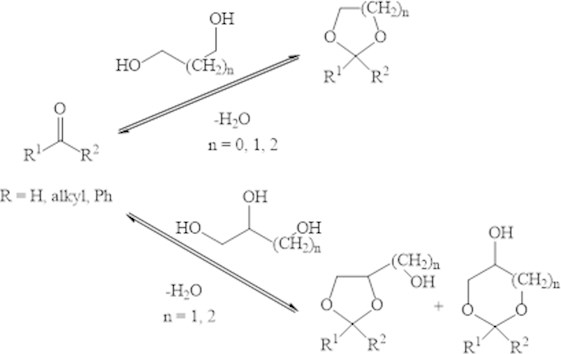 These advantages are saving during the transition to heterogeneous catalytic version of the Prince reaction.

In the presence of the acidic zeolites sterol and -metylsterol react with the formaldehyde with quantitative formation of the appropriate 4-fenyl-1,3-dioxanes (Fig. 2). The process is ending in 1-2 hours at temperature 80-130 °С.

Fig. 2. Condensation of styrene and its analogue with formaldehyde

Using of the zeolites in the Prince reaction is more profitable in case of conjugated dienes. From the isoprene with high selectivity formed 4-metyl-4-vinyl-1,3 dioxane, because in conditions of the homogenous catalysis takes place collateral formation of 4-mono and 4,4-disubstituted structures.

Fig. 3. Condensation of isoprene and paraformaldehyde

It was known way from available, based on derivatives of sterol, vinyl-gem-dichlorocyclopropane to derivatives of phenylacroleinin conditions of homogeneous catalysis [11]. It needs to 18-24 h and 5-7-multipleexcess of alcohol for the obtaining of acceptable yields of 60-70 %.

We found [12] that heterogeneous catalyst – anionite АВ-17 allows carry out the reaction of with stoichiometric ratio of the reagents in 4-6 hours at 120-125°С temperature with yield 80-90 % of linear acetals (Fig. 5). The stage of alkaline flow utility and demand of purification and recycling of the solvents are excluded.

The structure of synthesized compounds was assigned based by data of NMR 1H, 13C and chromatography-mass spectrometry. The determined signals for the individual cis-, trans-compounds are the protons of the ОCHО group as a kind of singlet with chemical shift 5.77 and 4.94 ppm. respectively. Protons of the ester group CH2O in specter of the trans-acetale resonate at 3.67 ppm., and in cis-isomer – at 3.69 ppm. In 13С NMR specter of trans-acetale the signals of carbonic atoms С = Сappears in more deficient space (114.97-141.16 ppm.) than the signals of similar atoms its cis-isomer (114.45 and 141.12 ppm.). The chemical shifts of carbon in ОСО group have a difference and there are 111.31 and 110.29 ppm. as respectively.

It is known that with homogeneous-catalytic reaction of arenes with vinyl-gem-dichlorocyclopropanes observe the formation - and -isomers’ mixture [13]. We studied the reaction of benzole and toluene with the 2-metyl-2-vinyl-gem-dichlorocyclopropane in the presence of different catalysts: microporous - H-Y, H-Beta, H-MOR, H-ZSM-5 and micro-meso-porous-H-Ymmm (Fig. 6).

Fig. 6. Alkylation of benzene and its analogues with substituted vinyl-gem-dichlorocyclopropanes

It should be noted that under the studied conditions, the alkylation of toluene with 2-methyl-2-vinyl-gem-dichlorocyclopropane led to the formation of only the -isomers.

Favorite preparation of ethers and esters by addition of alcohols or mono- and dicarboxylic acids, respectively, to cycloolefin hydrocarbons was carried out in the presence of mineral or organic catalysts [14-20]. Reactions proceed at high temperatures and with low selectivity without a catalyst [21].

We have described [22, 23] effective methods of ethers and esters preparation in 40-55 % yields by adding butanol or butyric acid to 2-vinyl- and 2-methyl-2-vinyl-gem-dichlorocyclopropanes in the presence of a commercially available zeolite catalyst H-Beta (Fig. 7).

Fig. 7. Condensation of substituted vinyl-gem-dichlorocyclopropanes with alcohols and acids

Because esters containing functional groups are interest such intermediates of organic synthesis, we involved in the reaction [22] commercially available styrene and glycerol formals as an equimolar mixture of 4-hydroxymethyl-1,3-dioxolane and 5-hydroxy-1,3-dioxane and styrene. The formation 5- and 6-membered isomers = 1.2: 1 with a yield of 60 % was observed at a temperature 150 °С for 5 hours in the presence of H-Beta catalyst (Fig. 8).

Thus, the transfer of homogeneous catalytic cyclization and condensation reactions to heterogeneous catalysis conditions increases the yield and selectivity of target compounds, simplifies the isolation of aim products, and, as a rule, does not require of expensive toxic solvents using.

Fig. 8. Condensation of an equimolar mixture of 4-hydroxymethyl-1,3-dioxolane and 5-hydroxy-1,3-dioxane with styrene

Studied new methods and ways of using heterogeneous zeolite catalysts in organic synthesis. Variants of cyclization and condensation are possible in the presence of structural type zeolites. It was found that zeolite catalysts have a number of complex output ethers and esters in the interaction of olefins with alcohols and acids of various structures.

The research was carried out with the financial support of the Priority 2030 program. The authors have not disclosed any funding.