Copyright © 2018 Sen Zhang, et al. This is an open access article distributed under the Creative Commons Attribution License, which permits unrestricted use, distribution, and reproduction in any medium, provided the original work is properly cited.

The type of disc brake has excellent efficiency and strong heat dissipation, which are beneficial to the transport capacity for mining motor vehicles. To ensure the reliability of the brake, the two-dimensional heat transfer differential equation model of disc brake is established, considering the dynamic change of convective heat transfer coefficient. The heat boundary conditions are established through the characteristics of brake disc structure and air condition, which is more accuracy than the traditional simplified method. Based on the PDE module in MATLAB, the mathematical model of heat transfer is solved and the transient temperature field is obtained. The calculation results are verified by the temperature field of the brake disc Link3900 NVH test platform. The results show that the research scheme has high computation accuracy, and can provide important basis, new ideas and advanced methods for the brake of mining motor vehicle in related fields.

The traditional type of mining motor vehicle brake is shoe-brake structure, of which contact and separation is realized through the transmission of the hand wheel linkage mechanism [1]. This type of brake mode has strong mechanical reliability and low cost, but the response time of the brake is longer, about 2-5 seconds. As a result, the braking distance of the empty travel is long, and the heat dissipation is general. What is more, it is easy to gather high temperature under continuous braking and reduce the friction coefficient of the friction pair. With the development of brake technology, research shows that hydraulic disc brake can effectively solve the shortage of shoe-brake, and is widely used in mining motor vehicle [2]. 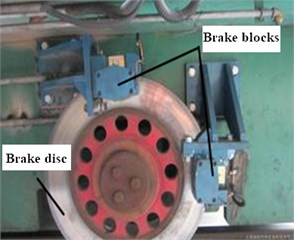 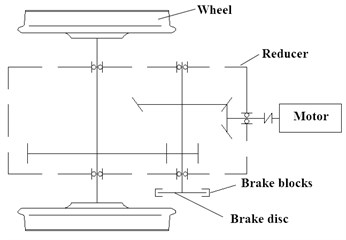 The disc brake of mining motor vehicle mainly consists of two components, including brake disc and brake blocks. The brake disc adopts a ventilation tray with ventilation slot structure, and the brake blocks is composed of two parts, which are arranged at 90 degrees, as shown in Fig. 1(a). In order to ensure the braking effect and reduce the impact of the braking force on gear and other components, disc brake is installed in the middle speed shaft of the reducer as shown in Fig. 1(b), and the braking torque will be delivered to the wheel spindle finally. The heat transfer characteristics of the brake are the key factors that affect the stability of the brake. At present, most of the heat transfer calculation based on analytical method simplifies the brake to one-dimensional or two-dimensional heat transfer model, neglecting the dynamic change of the heat dissipation boundary condition with the brake structure and working load [3], so the calculation accuracy is limited. Therefore, a PDE based transient heat transfer calculation method for disc brake of mining motor vehicle is presented in this paper. The influence of convective heat transfer on heat transfer characteristics is considered accurately, and the accuracy of temperature field is verified by bench test.

2. The establishment of mathematical model and boundary conditions

According to the working principle of the disc brake of the mining motor vehicle, it is known that the heat flow load produced by the brake is produced by the friction effect, and the calculation expression is as followed:

Set the subscript 1 and 2 to express brake block and brake disc respectively, then the calculation expression of can be shown as followed:

where is thermal conductivity, unit of W/(m·K). is specific heat, unit of J/(kg·K). is density, unit of kg/m3.

The temperature field of disc brake is very small in the circumferential direction, so the heat transfer problem can be transformed to a two-dimensional transient mathematical model under the condition of cylindrical coordinate system. The non-steady state heat transfer control equation can be expressed as followed:

where is the temperature, unit of ℃. is time, unit of s.

where is negative heat flux, unit of J/(m2·s). is the main air temperature, unit of ℃.

According to the principle of the Nusselt number calculation [5], the end face convection heat transfer coefficient of can be expressed as followed:

The ventilation slot facing heat transfer coefficient can be expressed as followed:

where the Prandt number of Pr is 0.703. is local Reynolds number, of which expression is:

For the disc brake, the proportion of heat transfer caused by thermal radiation is very small, only about 5 %. Therefore, the changes in space and time can be ignored. The total negative heat flow of can be expressed as followed:

where is radiant heat transfer coefficient, unit of W/(m2·℃).

The heat dissipation boundary in the axial and radial direction can be expressed with the third kinds of boundary conditions as followed:

where and are respectively local convective heat transfer coefficients at the radial both ends, unit of W/(m2·℃). and are the heat dissipation boundary of the model in the axial direction, unit of m.

3. Solution of heat transfer model based on PDE

3.1. The establishment of PDE model

In order to improve the efficiency of solving the unsteady heat transfer equation, the PDE module of MATLAB is used to deal with the partial differential equation. In the PDE module, the standard two-dimensional parabolic equation format is:

Set 1, , 0, 0 and the Eq. (12) will be translated into Eq. (3). With the boundary conditions, the temperature field of the two-dimensional model of the brake disc can be obtained.

Fig. 2. The two-dimensional model of PDE 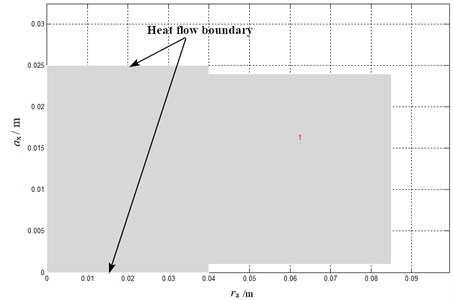 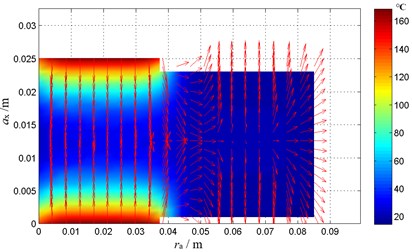 a) Temperature field at 2nd second

b) Temperature field at 5th second 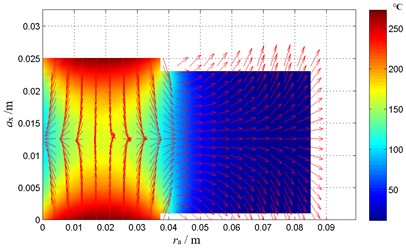 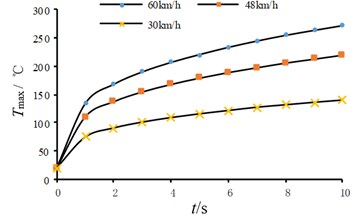 From Fig. 4(a), it can be seen that the temperature peak increases with the increase of the driving speed. In other words, the higher the driving speed is, the greater the heating rate of the disc brake is, the longer the time it takes for the transient temperature to move to the dynamic balance. Under the influence of the material of the brake disc, the temperature peak at different speed increases sharply in the 0-1 s time, and then tends to slow. Because of the effect of the brake disc material, the temperature peaks at different speeds increase sharply in the 0-1 s time, and then tend to slow down.

4.1. Type of test and installation

In order to verify the feasibility and accuracy of the disc brake temperature field calculation results, the bench test research that used for transport engineering is introduced [6]. The Link3900 NVH test bench is chosen to simulate the various braking conditions in the paper, which is able to complete the test of the transient temperature for the brake disc. The test bench is currently the most advanced thermodynamic testing equipment that used for the friction characteristics research of disc brake. It belongs to inertial platform test machine, which can simulate the load and driving state. Through the program, the environment temperature, air velocity, air temperature, brake pressure, brake disc speed and other parameters can be controlled [7].

In the experimental research, the installation structure of the brake and sensor is designed as shown in Fig. 5. The brake disc is connected with the spindle of the test platform through a universal coupling, of which the speed is controlled by the computer. The built-in sensor of the test bench includes torque speed sensor, displacement sensor and so on. The external sensor (temperature sensor) that selected in this test is the high-precision micro thermocouple, of which thermal response time of the sensor is less than 0.01 s. When the temperature sensor is installed, the ventilation groove on the end of the brake disc needs to be perforated. The lead wire can directly connect to the information acquisition system.

In order to ensure the reliability of the test results, the plane degree detection of the end face should be completed before the installation of the brake disc, so as to avoid the interference of the machining error to the test data. In the test, the brake pressure is set as 1 MPa, the spindle speed is set as 46.4 rad/s, and the initial temperature is set as 20 ℃. The single test cycle of continuous braking should be set up, which needs a longer time interval to ensure that the initial state of the test is exactly the same. Every test cycle for braking is carried out, and the average value of the temperature that is corresponding to the time step are taken as final results.

According to the change curve of temperature peak as shown in Fig. 4, the peak value at the 1st second moment and 2nd second moment is taken as the contrast data. The verification result of transient temperature between numerical solution and experimental value is obtained, as shown in Fig. 6. It can be seen that although the heat flow condition adopted in the analytical method is a non-discrete heat source, the numerical solution and the experimental value still show a good match in the trend and the size. It can be concluded that the analytical research method has good feasibility and high calculation precision for the heat transfer characteristics calculation of the mining motor vehicle disc brake. 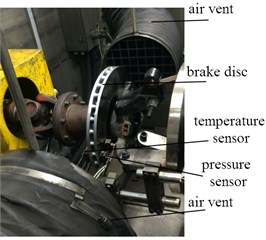 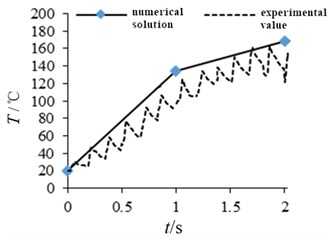 According to the long downhill uniform braking condition of the mining motor vehicle, the calculation of two-dimensional transient temperature field can be realized by using the analytic method efficiently and accurately, of which load and constraint are respectively expressed by the second and third boundary conditions, fully considering the heat transfer influence of brake disc structure and air flow characteristics. During the results of heat transfer calculation, it can be known that heat transfer rate in axial direction is greater than that of radial direction, which indicates that the thickness of the brake disc is more sensitive than outer diameter. The experimental research shows that the analytical research method in the paper has good feasibility and high calculation precision, which can provide important basis for structural optimization research.