Copyright © 2018 Jun Ye Li, et al. This is an open access article distributed under the Creative Commons Attribution License, which permits unrestricted use, distribution, and reproduction in any medium, provided the original work is properly cited.

With the rapid development of technology and economy, rough machining has not been able to keep pace with the times. Heavy industry is more and more inclined to the field of precision and ultra-precision machining. During that time, abrasive flow machining technology emerged as the times require. The process of micro cutting is achieved through the contact between abrasive particles and workpiece, so that the accuracy of workpiece's inner surface can be polished, and the accuracy of workpiece improved, which is a representative polishing method. Taking the three-order variable diameter tube as the research object, this paper discusses the polishing characteristics of three level variable diameter pipe with solid liquid two phase abrasive flow. The removal pattern of abrasive flow micro cutting is analyzed, with the collision effect between abrasive particles and wall considered and ignored, which provides technical support for abrasive flow polishing variable diameter pipe parts.

(a) Entrance boundary condition setting. The initial inlet condition is set to the speed inlet and the inlet velocity is perpendicular to the inlet boundary. In order to make the flow state of the calculated flow field turbulent, the initial turbulence intensity is 5 %. Solid phase entry: SiC particles were used as solid phase abrasive particles, and velocity inlet condition was used as well as fluid, with particle concentration of 10 % [6].

(b) Export boundary condition setting. To ensure that the fluid state is turbulent, the outlet is set to unrestrained exit [7].

Using the hexahedral grid with better quality, the three-dimensional model of the variable aperture tube was introduced into the grid division software to obtain the grid model as shown in Fig. 2. The quality of grid directly determines whether the result is accurate or not. The better the quality of grid is, the higher the accuracy of computation is. If the grid is too rough, on the other hand, it may cause the computation result not to converge, resulting in large deviation in calculation.

The dynamic pressure is the kinetic energy per unit volume of the fluid, which is equal to the difference between the total pressure and the static pressure, which reflects the movement of the fluid in the flow channel. From Fig. 4 and Fig. 5, it can be seen that the variation trend of the flow pressure of the abrasive particles is roughly the same whether the particle collision is considered or not. While considering particle impact, the dynamic pressure of abrasive flow is larger than that without particle collision being taken into account.

It can be clearly seen from Fig. 6 that the dynamic pressure values of the variable aperture pipes under two different conditions are approximately the same. At the initial stage, the two lines almost coincide, which means that the collision between particles at the first order is smaller, and the effect on the fluid is smaller. After the pore size changes, the particle impact at the pore size change is more intense, and the influence on the fluid is greater. Therefore, the dynamic pressure value with the condition of particle collision considered is greater than that of the particle impact condition ignored. From the dynamic pressure variation analysis of the variable aperture tube, it can be seen that the particle collision has a certain effect on the movement of the fluid during the polishing process of the abrasive flow, and the effect is more favorable to the processing effect, and it can significantly advance the polishing result of the abrasive flow. In order to better study the movement of particles, we analyzed particle distribution cloud pattern during abrasive flow polishing process. 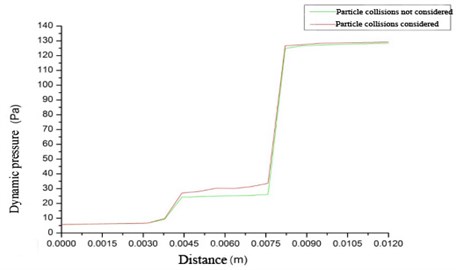