Adaptive control of a nonlinear suspension with time-delay compensation

Copyright © 2019 Jun Yao, et al. This is an open access article distributed under the Creative Commons Attribution License, which permits unrestricted use, distribution, and reproduction in any medium, provided the original work is properly cited. 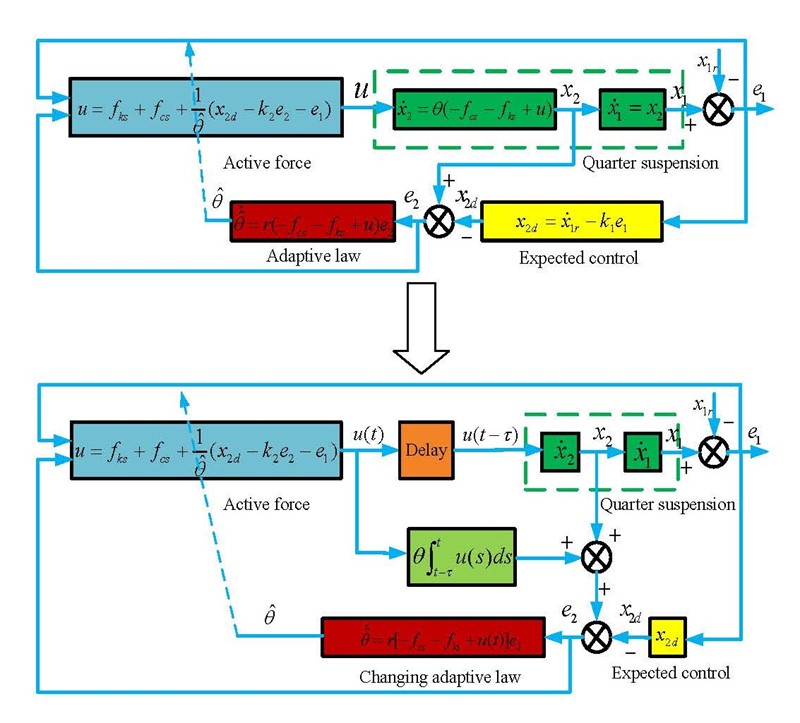 Much research has been conducted on the time-delay problem in system control processes. Examples include the semi-active control of single-DOF oscillators [1], the tracking control of reference models [2], the stability analysis of systems with time-delay effect [3], and the reduction of time-delay through improved hardware processing [4]. The time-delay of any given system consists of both variable delay and fixed delay.

For a structurally complex system, system delay is usually variable during the control process. Researchers [5] analyzed the effect of time-delay on overall stability for high-order nonlinear systems with feed-forward control. A similar case is the global output feedback control of an uncertain nonlinear system with unknown time-delay [6]. A neural network system is another complex system, and studies of its time-delay include system-state estimation that considers the effect of variable time-delay [7], stability conditions estimation [8], and its improvements [9]. Others have studied the effect of both time-delay and nonlinear perturbation on the finite-time stability of discrete systems [10] as well as the effect of variable time-delay on the master-slave synchronization conditions of Lur’e chaotic systems [11].

This paper is organized as follows: Chapter 2 describes a control model for quarter-car nonlinear active suspensions and an adaptive controller with time-delay compensation. Chapter 3 focuses on the simulation of the designed controller. This is followed by an experimental verification in Chapter 4, while Chapter 5 summarizes the conclusions of this paper. 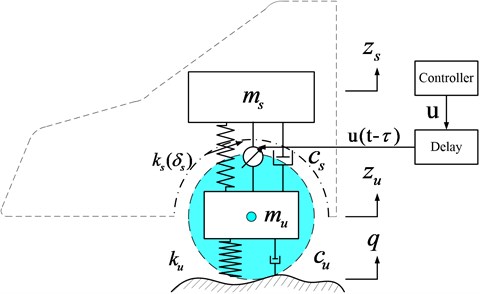 According to Newton’s second law, the dynamic equation of the quarter-car suspension model is:

where, . is a parameter that varies with load and meets the condition:

Car suspension control is a multi-objective control problem, through which we can not only improve ride comfort but also guarantee a safe performance and to stay within the suspension limits. These conditions can be expressed as:

where, represents the maximum working space of the suspension; represents a finite period of time.

The tracking error is defined as ; represents a reference signal thatis continuous and differentiable, and . Its differential form is:

is selected as the virtual control input of the above formula, and its ideal function is . At the same time, a time-delay is unavoidable in a realistic control system, so the control effect of the controlled suspension is affected. At this point, a compensation is needed. The error is defined as:

After taking the derivative of Eq. (6), we can write:

We then select the following ideal function:

where, represents a positive constant.

where, represents the estimate of .

We define the adaptive rate as:

where, is a positive constant.

And set the active control force as:

We then consider the Lyapunov candidate function:

For any 0, a set is always a compact set:

A schematic of the controller with time-delay compensation is shown in Fig. 2.

The parameters for the quarter-car suspension model are shown in Table 1.

The controller parameters are shown in Table 2.

A simulation analysis was conducted for the following scenarios:

As shown in Fig. 3(a), the new controller can ensure a satisfactory ride comfort. In addition, for the full frequency range and despite delays in the control system, the sprung mass acceleration in the controlled state remains below that of the passive state. This meets the requirements for high-precision system control.

As shown in Fig. 3(b) and Fig. 3(c), within the low-frequency range (< 20 rad/s), both the dynamic movement of the suspension and the dynamic load of the tire with adaptive control are reduced. 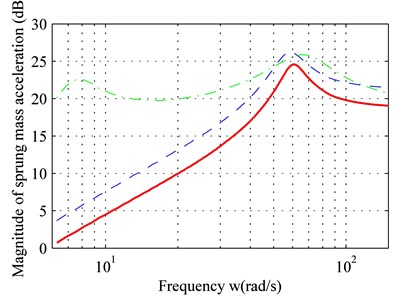 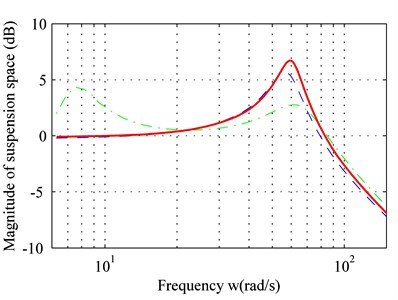 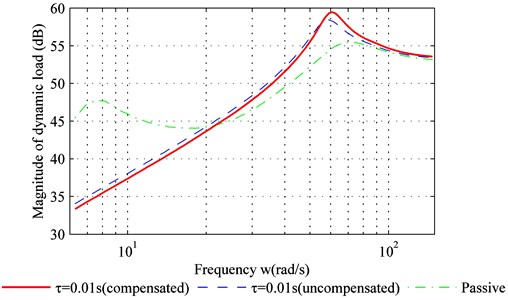 For the medium-frequency range (20 rad/s-80 rad/s) both dynamic movement of the suspension and the dynamic load of the tire have increased due to the adaptive control. They exceed that of the passive suspension, and a peak value is produced within the frequency band.

For the high-frequency range (> 80 rad/s), the dynamic movement of the suspension and the dynamic load of the tire with adaptive controller are similar to the passive suspension. In addition, Fig. 3 suggests that time-delay compensation can increase the controller effect and reduce sprung-mass acceleration.

A simulation was performed fortwo road types: bump road and C level road. The simulation for the bump road was conducted using the following function:

The C-level road is the most common road type for cars, and its frequency band covers the points of resonance for both sprung mass and unsprung mass.

As seen in Fig. 4(a) and 4(c), the adaptive controller with time-delay compensation performs better thanks to a smaller error and reduced sprung-mass acceleration for bump road. The same result can be obtained in C level road from Fig. 4(b) and 4(d). 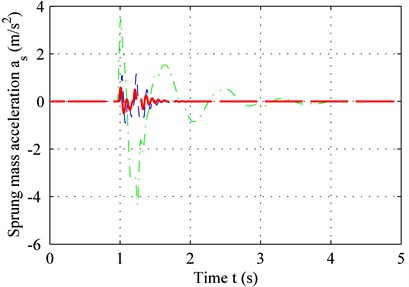 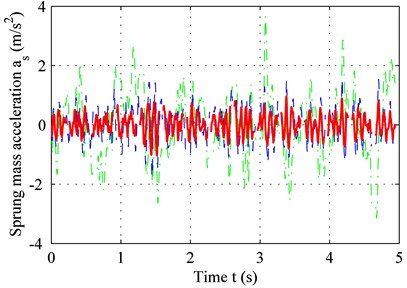 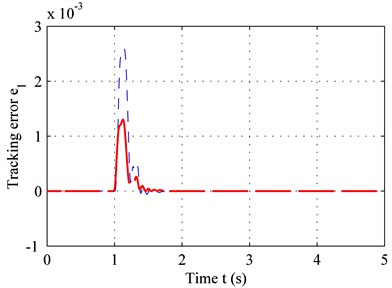 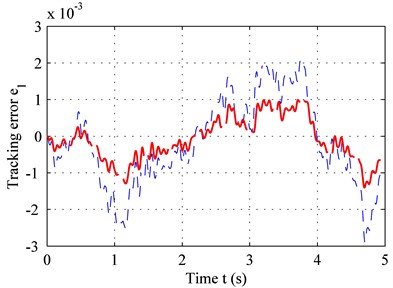 An overview of the RMS values for sprung-mass acceleration for the two road types is shown in Table 3. 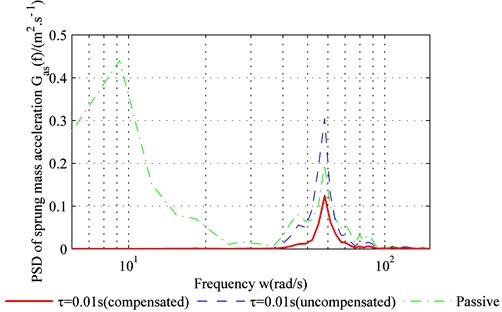 To better understand the effectiveness of the controller with time-delay compensation, a bench test was carried out – see Fig. 6. The actuator used in the test consists of a rack and a pinion. 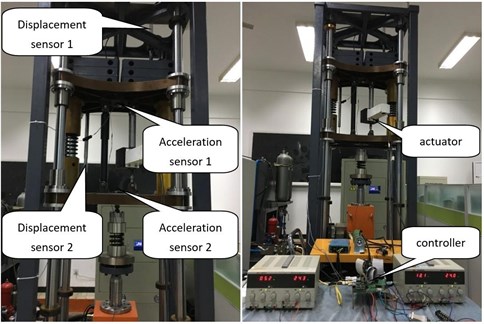 Fig. 7 shows the sprung mass acceleration results for both the bump road and the C level road. The delay-time 0.01 s and other parameters are identical to those shown in Table 1 and Table 2. According to Fig. 7(a) and Fig. 7(b), the performance of the adaptive controller with time-delay compensation is clearly superior to that of the adaptive controller without time-delay compensation. Both the period to settle down and the peak of vibration acceleration are the least for controller with compensation, shown in Fig. 7(a). The performance remains the same in regardless of the road type. This can be concluded from the result depicted in Fig. 7(b), in which the average acceleration under the controller with compensation is the smallest. The power spectrum chart in Fig. 7(c) confirms this result. Both the time domain result and the frequency domain result demonstrate that the proposed method can solve the problems mentioned above. 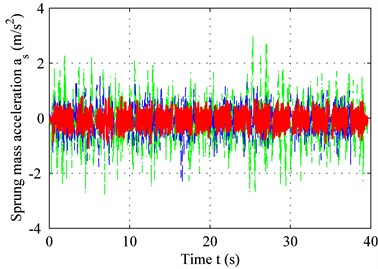 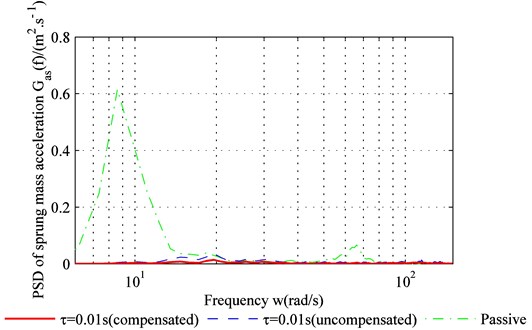 It is challenging to realize effective predictive control for a quarter-car nonlinear suspension system. One approach this challenge is to transform the problem into a problem of control with time-delay. This paper proposes an adaptive controller with improved precision for nonlinear systems and time-delay compensation. The results are compared with a controller without time-delay compensation:

1) With the proposed controller, the problem of time delay of the front suspension can be solved. This is done by a compensator. Unlike the linear algorithm, this algorithm does not need to establish the state equation of the linear system. The structure of this algorithm can deal with nonlinear problems, so it can solve the nonlinear items of suspension system, such as nonlinear coefficient or nonlinear stiffness.

2) Using the controller designed in this study, both dynamic travel and dynamic load of the tire with the suspension increased within the medium-frequency band. However, for the full frequency band, a satisfactory control effect can be achieved as well as significantly reduced sprung-mass acceleration. The bench test results are consistent with the results of the theoretical analysis, which confirms the improved effectiveness of the new controller.