Copyright © 2018 Soji Shimono, et al. This is an open access article distributed under the Creative Commons Attribution License, which permits unrestricted use, distribution, and reproduction in any medium, provided the original work is properly cited.

In the previous study about the UWCMM, developed an experimental model is reported [1]. And its calibration of the kinematics based on the Denavit-Hartenberg (DH) notation and evaluation of the position accuracy are reported [2]. In this study, in order to improve position accuracy, a position error estimation model based on artificial neural network (ANN) is constructed. The kinematics based on the DH notation and its calibration does not take into account the non-geometric factor such as backlash, bending. Thus, the position error due to these factors is not reduced by calibration of the DH parameters. Therefore, an ANN model which estimate position error of the kinematics based on DH method using joint angles information is constructed. In this paper, the developed test model and implemented calibration are overviewed and the constructed error estimation model based on ANN and its error estimation results are reported.

Fig. 1. Concept of the UWCMM 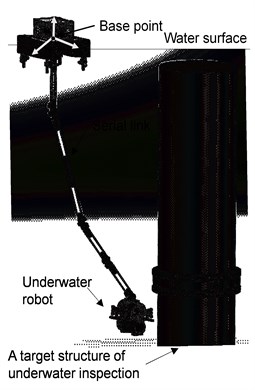 Fig. 2. Experimental model of the UWCMM 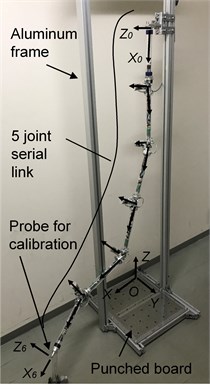 The developed experimental model of the UWCMM is shown in Fig. 2. Although the tip of the link is connected to the underwater robot during the underwater observation, in Fig. 2, a steel ball probe is attached for position measurement experiment. The experimental model has five number of single axis joint, and each joint has an absolute rotary encoder which has 18 bit resolution. Each link involves a micro controller and it read the joint angle from the encoder and transmit the joint angle to a data logger at the water surface. The position of the probe is calculated by the kinematics based on the DH notation using joint angles. The design values of the DH parameters of the multi joint serial link is shown in Table 1. The parameters represent movement and rotation between the coordinate systems. The indicates movement along the axis, the indicates movement along the axis, indicates rotation around the axis, and the θ indicates rotation around the axis, respectively.

To conduct the calibration, several pieces of data is required. The data consist the position error and the joint angles at that time. It is obtained from a position measurement experiment using a punched board that set on the aluminum frame (Fig. 2). The board has 42 holes whose position are known. The probe attached to the tip of the link is set on the hole and each joint angle is recorded at that time. The position error is the difference between position of the hole and the probe position calculated by the kinematics of the multi joint serial link.

For the calibration and the ANN training, 504 data were obtained by the position measurement experiment. The experiment was conducted with two postures of the multi joint serial link. The one was the angle of the tip joint was rotate positive direction and the other is the angle was rotate negative direction. All holes were measured six times with two posture of the serial link respectively. The experiment was conducted underwater. The experimental model was attached to the aluminum frame. The frame was sinking to the bottom of a water tank approximately 2 m deep.

The model is implemented with the Keras and the TensorFlow that are software library for the machine learning. The network of the constructed model is shown in Fig. 3. The input layer consist five node and it is input each joint angle which is normalized. The output layer consists three neurons that express the position error in , , and direction respectively. The hidden layer has four layers and each layer consist 175 neurons. The initializer for the input layer neurons is set to the lecun_uniform method [7], and the others initialized with the default method of the Keras. The activation function at the output layer is the linear function to represent position error. And the other layer uses the rectified linear unit (ReLU) function [8, 9] as the activation function. The evaluation function for training is selected the mean square error. The optimizer is selected the Adam method [10], and the beta1 is 0.9, the beta2 is 0.999 and the learning late is 0.001. The batch size is 42 that is the same to the number of holes on the punched board. 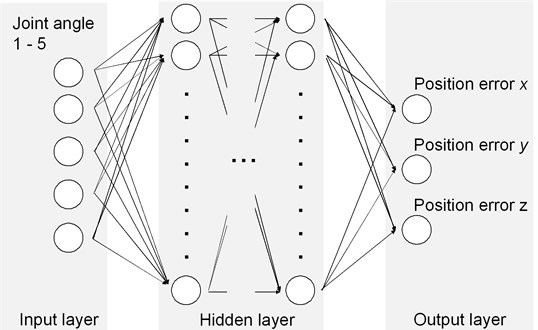 When the data of the 42 holes are defined as one dataset, the 504 data that was obtained the position measurement experiment consists 12 datasets. One dataset was used as the verification data and the other datasets were used for the calibration and the training of the ANN. Training of the ANN was repeated up to 100 times after improvement of the result of the evaluation function was no longer observed. 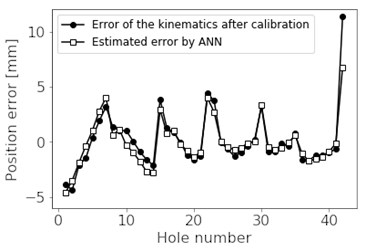 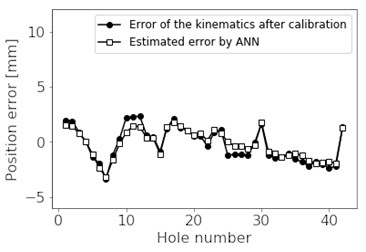 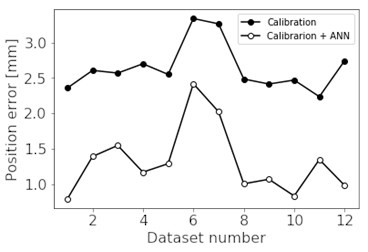 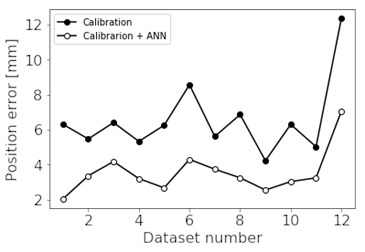