Copyright © 2019 Kamila Kotrasová. This is an open access article distributed under the Creative Commons Attribution License, which permits unrestricted use, distribution, and reproduction in any medium, provided the original work is properly cited.

The dynamic behavior of fluid filling in moving containers is a phenomenon that has attracted the attention lot of scientists. The liquid in an arbitrary shaped container under external excitations exerts the hydrodynamic pressure that with hydrostatic pressure acting together onto walls and bottom of container. The knowledge of the hydrodynamic fluid response on the solid domain of structure contributes to reliability and earthquake resistance of liquid-containing systems. This paper presents the possibility of simulation endlessly long fluid filled the rectangular tank – channel due to an action of horizontal ground motion. The Finite Element Method was used for simulation of this problem. One computational model uses FEM formulation ALE FSI and two models simulate only the solid domain by FEM and fluid effect due to horizontal ground motion is simulated by fluid-quasistatic hydrodynamic pressure given by Eurocode 8 and Indian standard. 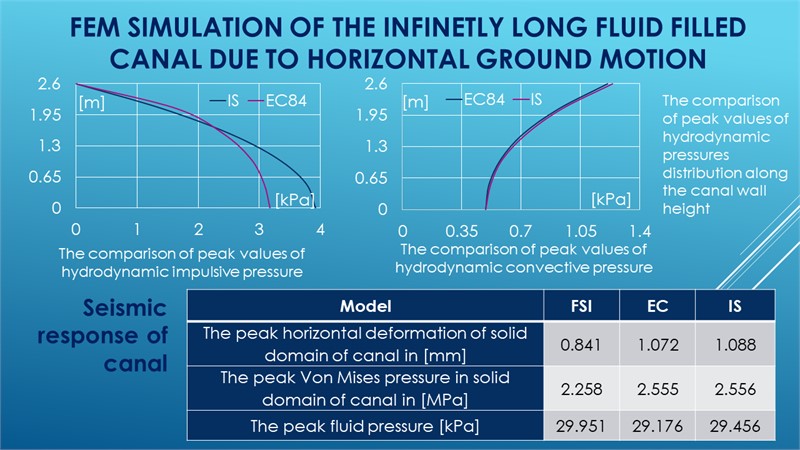 The dynamic behavior of fluid filling in moving containers is a phenomenon that has attracted the attention of geophysicists, engineers and mathematicians [1]. Liquid in an arbitrary shaped container under external excitations exerts the hydrodynamic pressure causing onto walls and bottom of fluid filled container together with hydrostatic pressure [2]. The knowledge of hydrodynamic effect of fluid on liquid storage tanks during the movement of the earth surface contributes to reliability and earthquake resistance of liquid-containing or liquid-transporting systems [11]. The design of containers loaded of earthquake is encouraged by various codes [3] IBC 2000, ACI codes, AWWA codes, API, Eurocode 8, NZSEE and Indian code. In this paper will be analyzed seismic response of rectangular infinitely long tank – canal by using of Eurocode 8 [4] and Indian standards [5] by simulating of Finite Element Method (FEM) with comparing of numerical solution using of FEM the Arbitrary-Lagrangian-Eulerian (ALE) formulation with the two way Fluid-Structure Interaction (FSI) techniques for simulation of the interaction between the structure and the fluid at the common boundary [6].

2. Seismic effect of fluid on channel

The considered a rectangular shallow founded infinitely long canal, having the width 2, with uniform thickness walls [13]. Rectangular canal was filled with liquid to the height . Thestorage structure is excited by a horizontal ground motion in the – direction, Fig. 1 [14].

The Laplace equation of rectangular channel whose walls can be considered as rigid that is excited by the horizontal ground motion can be given in the Eq. (1) [15]. The total hydrodynamic pressure is given as absolute summation of an impulsive and a convective contribution [16]:

The impulsive component can be expressed by:

The hydrodynamic convective pressure component can be obtained by the summation of modal sloshing terms, each one having a different variation in time [20]. The decisive contribution for rectangular channel is the first mode:

where is the accelaration response function of a simple oscillator with frequency of the first fundamental mode with the appropriate value of damping, when is subjected to the input acceleration [21]. The function [22] gives the distribution of impulsive pressure along the height for dominant first mode [23].

The first sloshing mode period of oscillation o is: 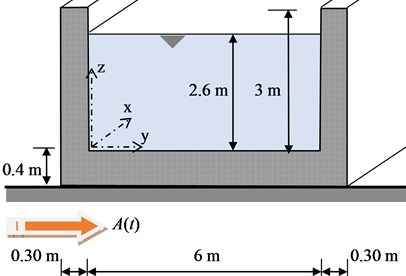 The alternative “quasistatic” approach of numerical simulation by using of FEM was considered by using of software ADINA too. In these approaches only solid domain of structure – the base and walls of the canal were modelled by plain strain definition of 2D SOLID finite element. The effect of fluid was simulated classically as the static loading by hydrostatic pressure together with hydrodynamic pressure. 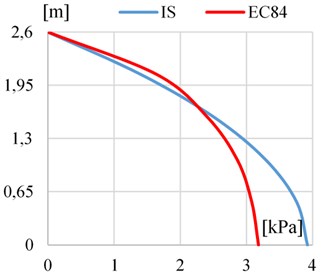 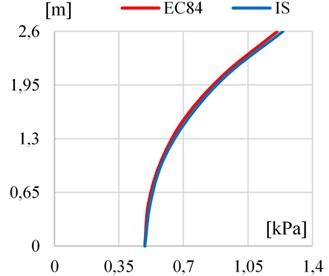 This work was supported by the Scientific Grant Agency of the Ministry of Education of Slovak Republic and the Slovak Academy of Sciences the Project VEGA 1/0374/19.