Copyright © 2019 Yu Xu, et al. This is an open access article distributed under the Creative Commons Attribution License, which permits unrestricted use, distribution, and reproduction in any medium, provided the original work is properly cited.

The stiffness of boundary conditions in mechanical structures is difficult to represent. An approach on high fidelity modeling of the clamped boundary condition is proposed in this paper. Firstly, the normal and tangential stiffness of the contact surface of the clamped boundary condition is parameterized by using thin-layer element with isotropic material. Secondly, the material parameter is identified by minimizing the discrepancy between the calculated results and the experimental data, and parameter identification can be treated as an optimization problem. Experimental investigation is undertaken to verify the proposed method by employing an aluminum honeycomb panel, the numerical model of which is constructed by using the equivalent theory. Thin-layer elements with different properties are used to simulate the mechanical properties in different area of the boundary conditions, and the experimental modal data is adopted to identify the material parameters. Results show that the weighted matrix is a crucial option in the parameter identification procedure, and the width to thickness ratio of the thin layer element has a great influence on the identification results. After parameter identification, the error of the first three order of the modal frequencies is less than 2.7 %, the thin-layer element can accurately reflect the mechanical performance of clamped boundary condition.

Structural dynamic performance is strongly affected by boundary conditions, which should be considered appropriately in both theoretical and numerical analysis. The effects of the boundary conditions on the performance of the mechanical structures are always underestimated and difficult to be determined [1]. The exist inappropriate methods for modeling of boundary stiffness, such as idealizing constraints into completely rigid and modelling ostensibly similar boundaries refer to the previous experiences, can be applied to characterize the boundary conditions in an oversimplified way, which will inevitably lead to errors in structural dynamics modeling.

Due to the crucial importance of mechanical behavior of boundary condition in engineering structures [2, 3], investigations on modeling of which have attracted interests of researchers [2-5]. The intuitive approach to determine the stiffness of clamped boundary conditions by using contact model between rough surfaces [6-8], Ahmadian and Zamani [9] studied the local nonlinear mechanism by experimentally observing the behavior of a beam structure with micro-slip/slap at the clamped end, these models can reflect the contact mechanism through analysis the asperities behavior of the real contact area, and the qualitative nonlinear contact stiffness can be derived. However, the contact analysis for boundary conditions will be very expensive in time consuming when apply in modeling of complex structures. Simplified equivalent modeling is the alternative method to represent the contact mechanics relationship and the boundary stiffness.

Identification of the boundary conditions from experimental data is an effective solution to improve the modeling accuracy. Pabst and Hagedorn [10] proposed an inverse method to identify the boundary stiffness and damping parameters of a visco-elastically clamped beam by using modal data, in which the boundary conditions was parametrized with a torsional spring-damper, and a translational spring-damper. Yang et al. [11] constructed a numerical model to solve multi-variables inverse problems for a beam with elastic boundary support, in which the static responses were employed and the elastic supports and constitutive parameters can be identified by using Levenberg-Marquardt algorithm. Wang [12] extended the cross-model cross-mode method for model updating by incorporating the connection flexibility and boundary conditions, the flexible joints and boundary conditions can be simultaneously updated. Yang et al. [13] proposed an approach using frequency response functions to identify the joint parameters including the rotational stiffness, which the accuracy of the identified results is strongly sensitive to the parameters. Baruh and Boka [14] modeled boundary conditions using axial and torsional springs, the orthogonality condition and the system eigenvectors were adopted to identify the spring constants. Boundary stiffness are simplified as spring models in the above researches, modeling difficulties will arise when apply spring models to complex structures, and the deficiency is obvious for modeling large contact surface.

Parameterization plays an important role in the stiffness identification of boundary conditions. Mottershead et al. [1] indicated that parameterization is critical in updating of boundary conditions, the boundary stiffness in a cantilever was modeled as the effective length of elements closest to the joint, but in some cases, the corrected matrices will lose connection to the physical significance while matching the experimental modal data. Noll et al. [15] inversely identified an elastic metal beam end-supported by elastomeric joints by revising non-diagonal terms in the stiffness matrix. The above stiffness characterization methods can be approximately parametrized the boundary stiffness, however, modeling complexities are still exit. In order to solve this problem, thin-layer element has been introduced to model the dynamics of mechanical joints [16-18], The concept of which was firstly proposed by Desai [19] who applied to the contact analysis in geotechnical engineering, and has been widely applied in equivalent modeling of joints, The normal and tangential stiffness of the contact surface can be accurately represented by the thin-layer elements.

where , , are natural coordinate symbols, [] is the Jacobian matrix, and when the coordinates of the natural and local coordinates are consistent, which can be written as:

By using of two-node Gaussian integration method, the following numerical expression for stiffness matrix [] of thin-layer element can be obtained:

where , , and are the Gaussian integral weight function.

and are the normal elastic modulus and tangential shear modulus, respectively, which are determined by the contact surface properties of the connecting structure. If the contact performance is coupled to the normal and tangent, then the coupling term can be added to the constitutive relationship Eq. (5). In the finite element analysis, the thin layer element integrated isotropic material can be used to simulate the contact interface, the constitutive relationship is expressed as:

in which is lame constant, is shear modulus. the isotropic material has only 2 independent material parameters. According to the basic theory of thin-layer element, the constitutive equation of the material will be degenerated to the following form:

The selection of different thickness of thin layer element will have a great influence on the calculation results. When the thickness is too large, the element has six strain components, and it is difficult to accurately reflect the mechanical characteristics of the contact interface. When the thickness is too small, the value of the determinant of Jacobian matrix approaches to zero, the matrix is ill conditioned and difficult to solve, and the displacement strain relation can’t be calculated by finite element method. A ratio coefficient is defined for the selection of thickness of a thin-layer element as follows:

In this paper, material parameter identification of thin-layer elements is transformed into an optimization problem. The minimum value of the objective function is as follows:

in which is the residual term represents the discrepancies between the experimental modal data and the calculated results, the modal data including the modal frequencies and mode shapes. is the weighted matrix, which reflects the relative weight of modal parameters. In general, is the identity matrix or [diag()]-2.

The real value of the elastic parameters is set to and the initial value is . The first order Taylor expansion of the eigenvalues and the mode matrix at the point is as follows:

where is the updating elastic parameters. When objective function is used for iterative solution, the problem of the th iterations is described as followed: 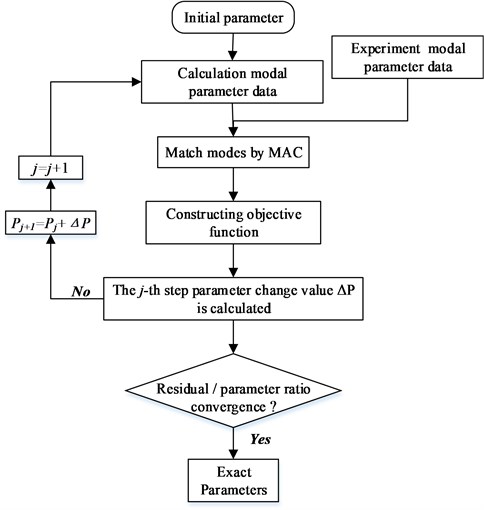 Fig. 3. The experimental arrangement of the clamped honeycomb panel 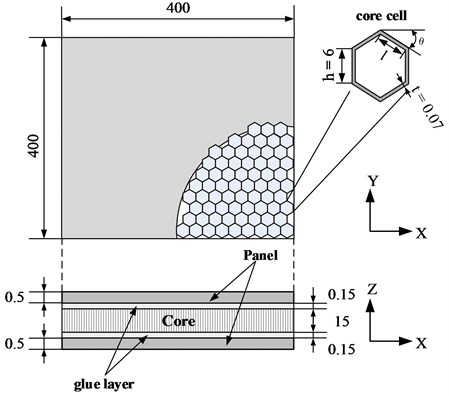 Equivalent material parameters which core equivalent shear modulus and have the most impact on the dynamic performance of the equivalent model. The stress distribution is complicated When the honeycomb core considers the pure shear of three planes. The minimum potential energy principle and the principle of the minimum residual energy can be used to estimate the range of the two out-of-plane shear modulus:

where in the formula is the shear modulus of the honeycomb core material; is the updating factor, which theoretical value is equal to 1, generally take 0.4-0.6 in engineering applications. As the following formula, the equivalent density of honeycomb core can be obtained by mass equivalent: 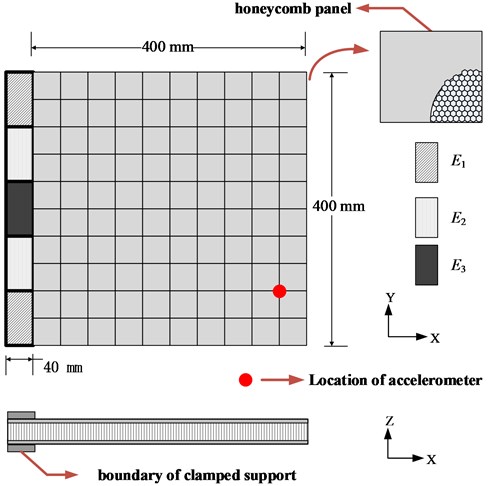 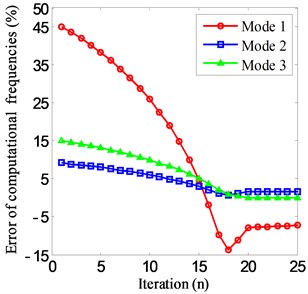 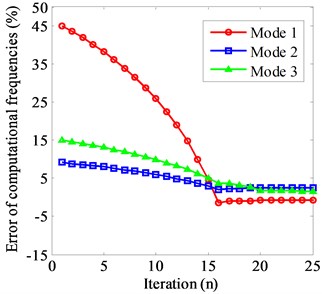 After the identification, the accuracy of the inherent frequency is greatly improved. The error of the first three order calculation natural frequency is less than 2.63 %, when [diag()]-2 is selected as the weighted matrix .

Based on the above results, the weighted matrix is determined as . Then researches of parameter identification are carried out when the of thin layer elements is 10, 50, 100, 500, respectively.

Frequency iteration convergence curve under different is shown in Fig. 7. The convergence error is reduced with the increase of the width and thickness ratio. However, more iterations are need for convergence.

Table 2 is the comparison of calculation natural frequency and parameter identification results of thin-layer element under different . In this case, the is increased by changing the direction of the thickness. The stiffness properties of the contact surface are determined by the elastic parameters and the thickness of the thin layer element. The ratio coefficient of the thin layer element has a great influence on the identification results. The error of convergence result is improved with the increase of but more iterations are needed. 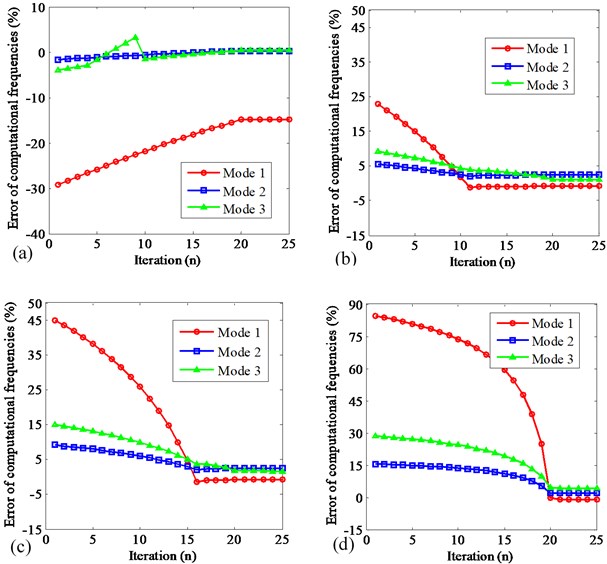 An approach on identifying the stiffness of the contact surface of the clamped boundary condition is proposed in this paper. The contact surface is modeled based on the theory of thin-layer element, and modal parameters are used to identify the material parameters of thin-layer element which represents the stiffness of the contact surface. The equivalent modeling method are employed to establish the simulation model of aluminum honeycomb panel. Three kinds of thin layer elements with different properties are used to simulate the mechanical change of the boundary. The effect of the weighted matrix and the proportion of on the convergence results are discussed. It is concluded that the convergence error of the parameter can be reduced effectively when weighted matrix is [diag()]-2.