Copyright © 2019 Minghui Chu, et al. This is an open access article distributed under the Creative Commons Attribution License, which permits unrestricted use, distribution, and reproduction in any medium, provided the original work is properly cited. 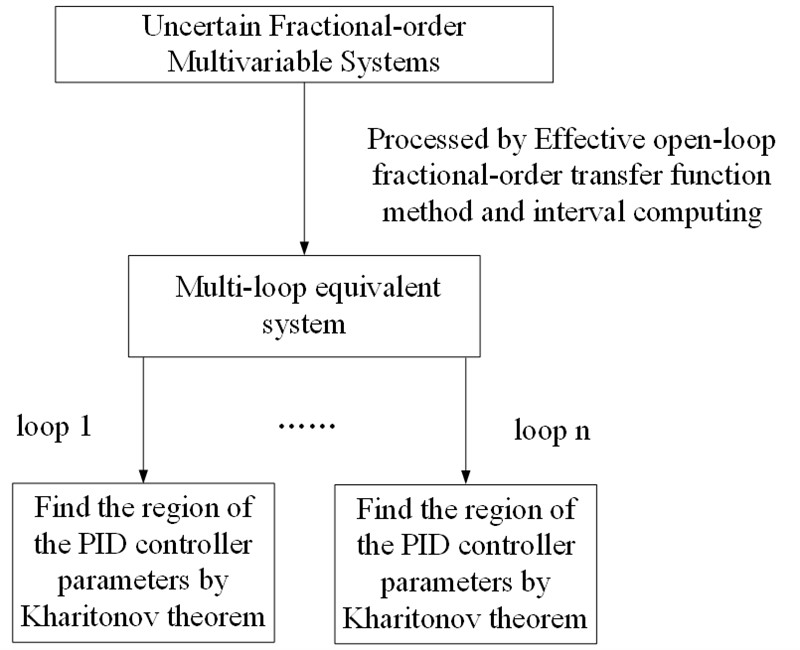 The entire closed-loop of the system is shown in Fig. 1, where , and are the inputs, internal variables and outputs, respectively. is the PID controller. is the parameter uncertain fractional-order multivariable system. The model is shown as follow:

The parameters in model are uncertain in a certain interval. The general expression is:

Fig. 2. The concept of the FO-EOTF 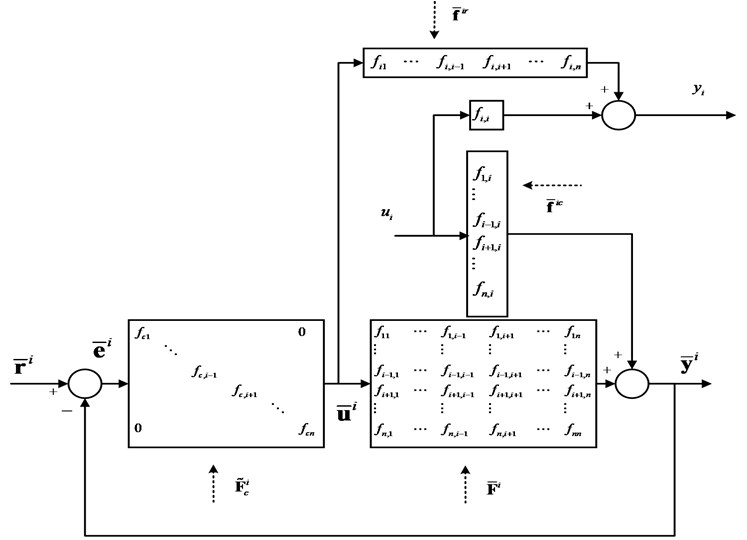 When , can be written as:

From Fig. 2, it is clear that is related to and . The corresponding relationship can be written as:

When the frequency is below the cut-off frequency [10], the relationship between and is:

Fig. 3. The closed-loop of multivariable system after FO-EOTF

The influences from the controllers of the other loops are eliminated when tuning the controller of loop . Each loop can be obtained by Eq. (7). Thus, the entire multivariable system can be equivalent to a diagonal matrix system , which is:

From Fig. 3, we can know that the structure of the whole closed-loop control loop after replacing the parameter uncertain multivariable system with the parameter uncertain equivalent model . The equivalent model can effectively reduce the interference caused by the coupling factors between the systems, and also greatly reduce the amount of computation. The equivalent transfer function of loop in is only related to all elements in the system in Eq. (7). Assuming the general expression as:

where is consisted of and in Eq.(2), is consisted of . Similarly, the FO-EOTF model similar to Eq. (9) can be obtained for each parameter uncertain multivariable system. However, the general expression of in Eq. (9) is inconvenient to analyze and calculate because of the excessive time delay. Thus, Eq. (9) can be simplified as:

Find out , and according to the rules mentioned above. Then, and can be obtained by comparison. For the convenience of display here, assuming , that means . Then, the remaining part of the extract is processed by Taylor expansion. Thus, Eq. (12) can be rewritten as:

Therefore, Eq. (10) can be approximated by Oustaloup algorithm, which shown in Eq. (15) as:

where , and are the proportions, integrals and differential terms of controller , respectively. In order to satisfy the stability and certain robustness, a gain phase margin tester is added to the loop , as shown in Fig. 4. Thus, the characteristic polynomial of the loop can be obtained:

where and are the real and imaginary parts of in respectively, while and are uncertain but bounded. Thus, Eq. (19) can be rewritten as:

When Eq. (21) satisfies the Hurwitz stability, the entire uncertain system satisfies the stability condition. In order to further simplify the computation, the Kharitonov theorem is used to deal with the Eq. (21). The theorem indicates that Eq. (21) can be replaced by a set of boundary equations:

where and are the real and imaginary parts of , respectively. Let and equal to zero:

where , , , , and are the remaining parts after the common factor is extracted. Using the Cramer rule, the equations about and can be obtained:

Assuming the model in Fig. 1 is a 2×2 parameter uncertain fractional-order multivariable: 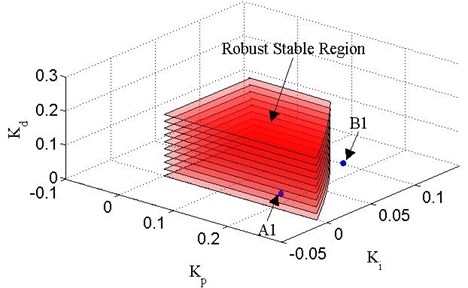 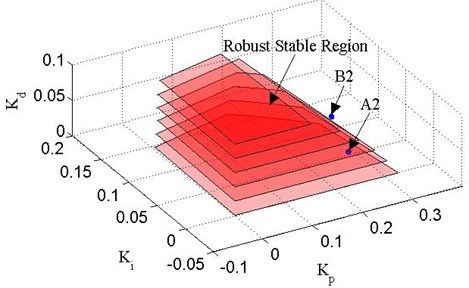 Fig. 7. Responses of controllers and 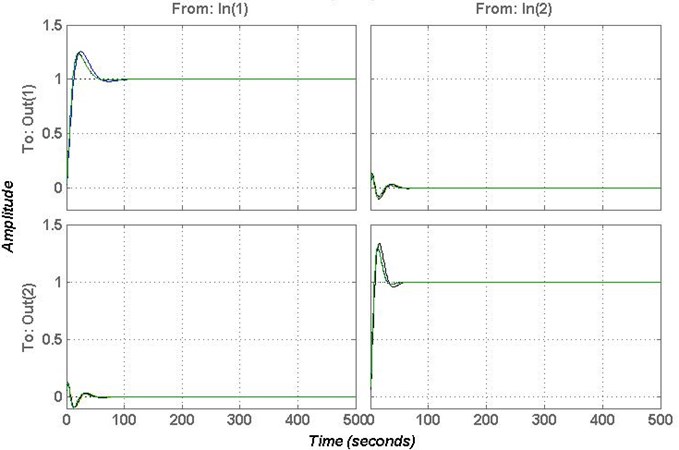 Fig. 8. Responses of controllers and 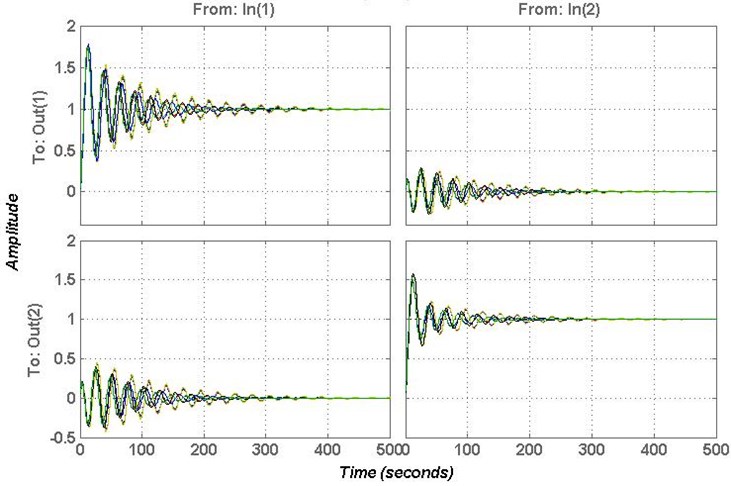 Fig. 9. Responses of controllers and 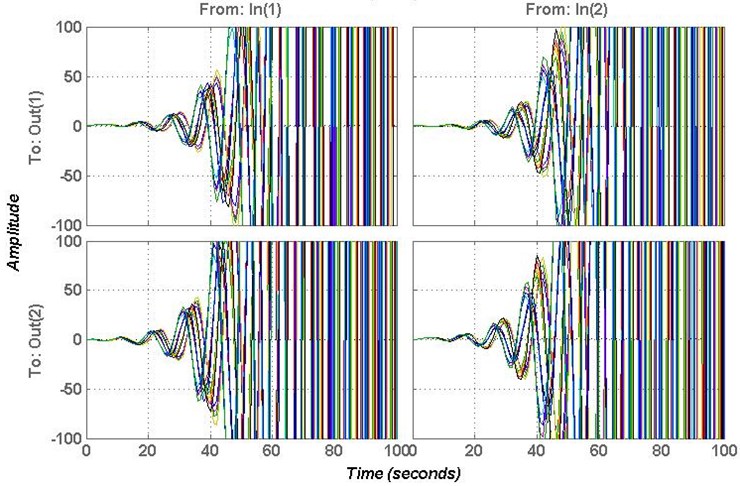 Fig. 10. Bode plot of the controller and 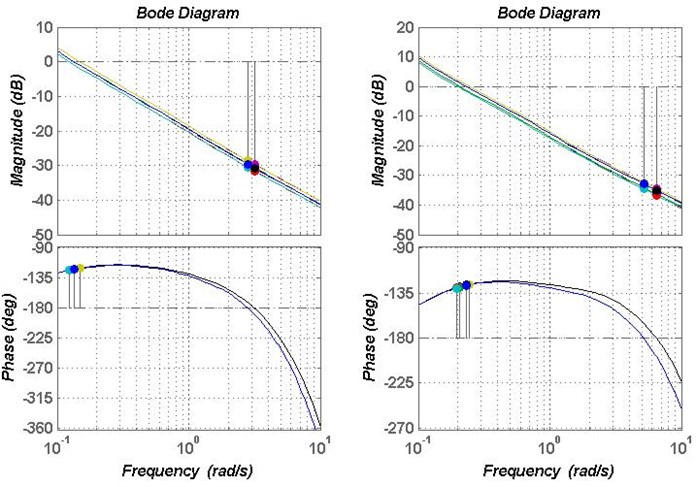 Fig. 11. Bode plot of the controller and 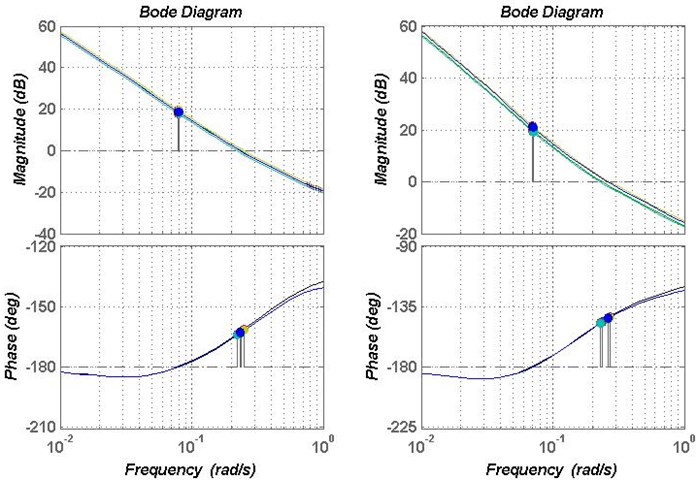 The work of this paper is supported by the National Natural Science Foundation of China (Grant No. 21676012) and the Fundamental Research Funds for the Central Universities (Project No. XK1802-4).