Copyright © 2019 Xiaolei Li, et al. This is an open access article distributed under the Creative Commons Attribution License, which permits unrestricted use, distribution, and reproduction in any medium, provided the original work is properly cited.

The influencing rules of tooth disc positioning accuracy of the dynamic servo tool rest under the influence of error and no error are determined through computer simulation by simplifying the tool rest and establishing the finite element model.

2.1. Analysis of the gear’s initial error

For error analysis (Fig. 1), the plane formed by the median line of the dynamic servo tool rest’s ideal tooth disc surface is defined as the node plane. Tool rest and gear disc coordinate systems are also defined. The symmetrical centre relative to each tooth in the plane of tooth disc are determined, and this point is taken as the origin of the tool rest coordinate system. 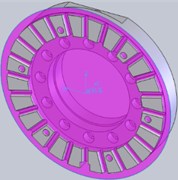 The angular error caused by gear machining error is:

where is the total deviation of tangential synthesis, is gear dividing circle diameter, and is the gear angular error.

The normal distribution function is used to analyse the working error. Therefore:

where is the standard uncertainty for the angular motion of gears.

The assembly error will cause the gear to jump in the process of rotation, thereby causing the angular error of shafting:

where is the coaxiality of axial diameters at both ends:

where is the difference between the journal and the ideal roundness, and is the relative difference of axis.

The error caused by eccentric connection between gear and shaft is:

where is the gear eccentricity, and is the standard uncertainty of angular motion caused by the eccentric connection between the gear and the shaft.

The angular error of transmission mechanism is:

where is the synthetic standard uncertainty of angular motion of a single gear:

The radial, axial, inclination and phase error angles of fixed and locking tooth discs can be determined by decomposing the initial position error of the tooth disc (Table 1).

The inaccurate milling of a cutter in the axial position results in tooth thickness error. Particularly, when the direction of the linear movement of the milling cutter does not coincide with the coordinate system of the tooth disc, the error will be generated. Inaccurately relative inclination of milling cutter will generate tooth shape half angle error (Fig. 2).

The tooth thickness, tooth direction and half-angle errors of tooth shape can be determined by using Eqs. (10-12), respectively (Table 2).

The moving tooth disc and the main shaft are simplified into fixed rigid connections without the role of bolt holes. The errorless tooth disc mesh is hexahedral element. The tooth surface of the locking tooth disc is set as the target surface, and the two other tooth surfaces are the contact surface ‚according to the position connection relation of the three tooth discs. The target element is targe 170, and the contact element is contat 173. A full restraint is applied on the outer circle far from the moving and fixed tooth discs. Then, a uniform pressure load is applied at the connection point between the locking tooth disc and the piston. Equivalent displacement and Equivalent stress diagram are shown in Fig. 3.

b) Displacement of lock tooth disc 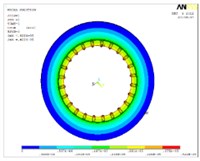 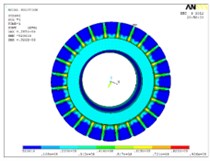 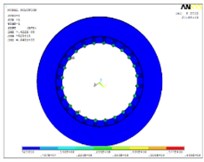 b) Displacement of lock tooth disc 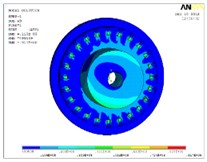 The force on the tooth disc with error is uneven, and the maximum error of the extreme stress distribution can reach 142.28 % based on the static analysis results of the errorless gear in Table 3. Meanwhile, local deformation is also relatively large, and the maximum error of deformation extremum can reach 1371.35 %. Thus, the initial error of tool rest will impact the positioning accuracy of the tooth disc greatly.

The conclusions are drawn as follows:

1) Main factors that affect the factory accuracy and reliability of the dynamic servo tool rest are identified.