Copyright © 2020 Aijun Chen, et al. This is an open access article distributed under the Creative Commons Attribution License, which permits unrestricted use, distribution, and reproduction in any medium, provided the original work is properly cited.

Geosynthetic-reinforced soil structures are mostly used to retain subgrade slope of highway and railway. For the design and performance analyses of geosynthetic-reinforced soil structures under repeated loading, such as those induced by compaction, traffic and earthquakes, the understanding of cyclic soil–geosynthetic interface behaviour is of great interest. Nevertheless, experimental data concerning this type of behaviour are very scarce. A laboratory study was carried out and is described in this paper. This paper presents the behaviour of an interface between a coarse-grained soil and a geogrid under cyclic loading conditions. A large-scale direct shear test device able to perform displacement-controlled cyclic tests was used. The results obtained are presented and discussed, especially the effects of the displacement amplitude and normal stress on the shear stiffness and damping ratio are investigated. The dynamic response parameters of the soil-geosynthetic interface are greatly affected by the number of cycles, and the variations in the two parameters with the number of cycles are related to the normal stress and the shear displacement amplitude. when at large displacements, the damping ratio decreases first and then stabilizes with the number of cycles. However, at small displacement, the shear stiffness and damping ratio are all decrease somewhat at the initial stage of cyclic shearing. As the experimental materials used in this study are relatively single, and further experimental research should be carried out in the future. The shear parameters of interface in this study can provide reference for the design of reinforced soil structure. 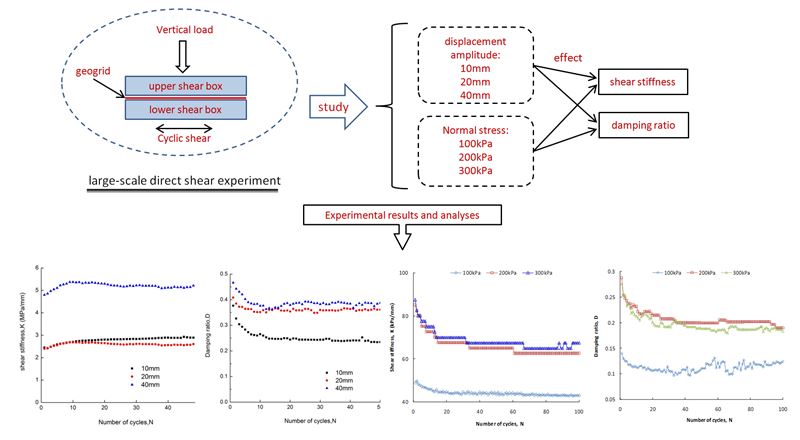 With regard to highway and railway subgrade engineering, geosynthetics are often used to enhance the stability of subgrade slopes. Reinforced soil structures in practice bear not only static loads such as gravity but also dynamic loads such as earthquakes, wave loads and traffic loads. The properties of the soil-geosynthetics interface under static loading may be studied by monotonic direct shear tests and pullout tests. Under dynamic loading, the soil-geosynthetic interface is subjected to cyclic shear action, and the cyclic direct shear test is used to study the interfacial shear behavior under cyclic shear. Due to the different loadings, the interfacial characteristics must be different for static loads and dynamic loads. Research on the dynamic shear properties of the soil-geosynthetic interface will help understand the interaction principle of the interface and improve the accuracy of the stability analysis of reinforced soil structures under dynamic loads.

In studying the characteristics of the soil-geosynthetic interface of reinforced soil structures under dynamic loads, the cyclic shear stiffness and damping ratio are often used to characterize the dynamic response parameters of reinforced soil structures. However, there has been no comprehensive study on the shear stiffness and damping ratio of the soil-geosynthetic interface in previous studies, especially the number of shear cycles used in the existing research results, which are too few to reflect the real behavior of actual engineering under dynamic action. In this paper, the large amplitude cyclic shear test and small amplitude cyclic shear test are carried out, and the variations in the shear stiffness and damping ratio under different dynamic loads for geogrids against coarse-grained soil interfaces has been obtained, which can provide effective parameters for the stability analysis of reinforced soil structure.

A coarse-grained soil adopted as the testing soil is a mixture of clay and graded gravel. The grain size distribution curve of the soil is presented in Fig. 1, and the physical properties of the clay are shown in Table 1. Fig. 1 reveals that the content of fine-grained group less than 0.075 mm is only about 16 %, so it can be judged that the soil material belongs to sandy soil, which is a good kind of subgrade filler. The test geogrid is bidirectional, and its technical parameters are shown in Table 2.

Table 2. Technical indexes of the geogrid 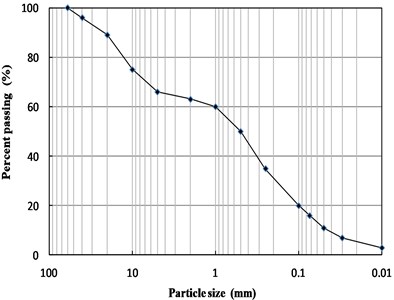 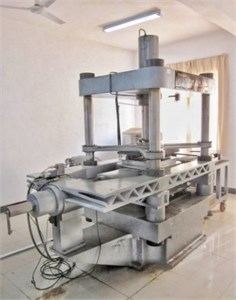 2.2. Description of the apparatus

This test adopts a large-scale dynamic-static direct shear apparatus (as shown in Fig. 2), and the length, width, and thickness of the upper and lower shear boxes are 500 mm×500 mm×150 mm. The maximum particle size of the soil in the direct shear test is 48 mm. The geogrids are fastened on the top of the lower shear box via a fixture before the shear test. When shearing the interface, the upper shear box is fixed while the lower box moves horizontally. The maximum horizontal shear displacement can reach 300 mm, with shearing rates from 0.01 mm/s to 2 mm/s. The maximum vertical displacement is 200 mm, and the maximum normal loading is 600 kN. Due to the same size of the upper and lower shear boxes, the vertical stress remains unchanged by changing the vertical loads. The horizontal and vertical displacements during the shearing process are measured using the displacement sensor and automatically read by the computer.

In addition, the large direct shear tester, equipped with an auxiliary soil sample loading and unloading device, is adequate to make the large soil samples and to load and unload the shear box faster.

Fig. 3. Geogrid in the interface 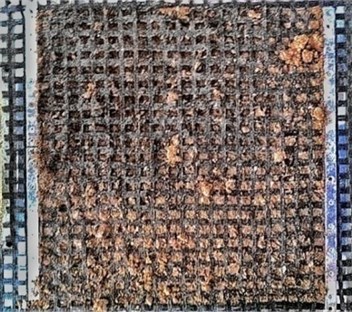 In the formula, and are the damping ratios in two shear directions, is the area of the whole hysteresis loop, and and are the shaded areas in Fig. 4.

Fig. 4. Calculation of the secant shear stiffness and damping ratio from the hysteresis loop 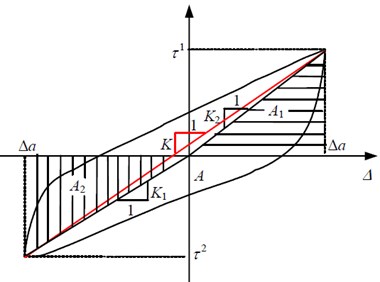 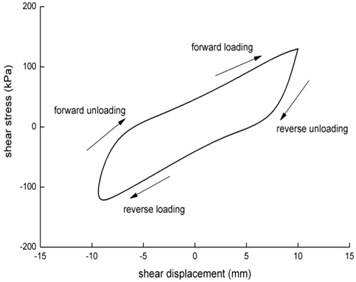 5.1. Characteristics of the interface shear strength

Fig. 6. Curves of the shear stress versus shear displacement 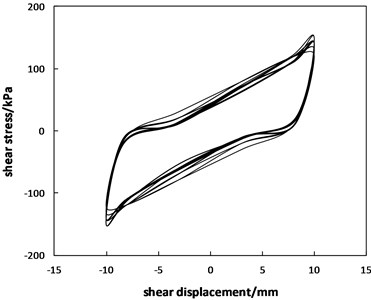 a) Displacement amplitude of 10 mm 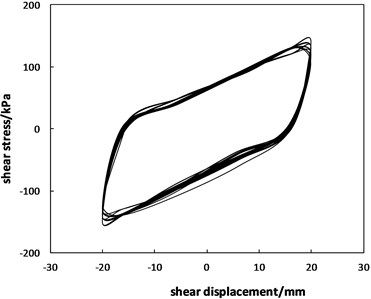 b) Displacement amplitude of 20 mm 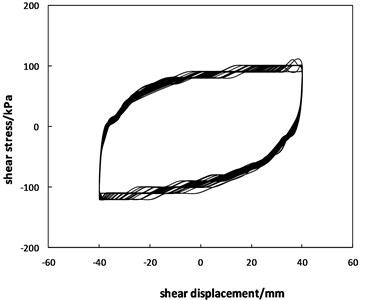 5.2. Normal deformation of the interface 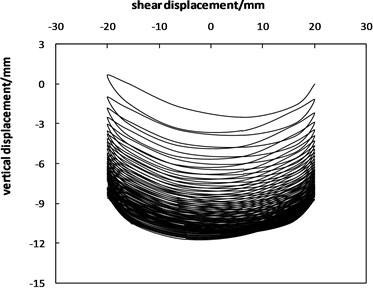 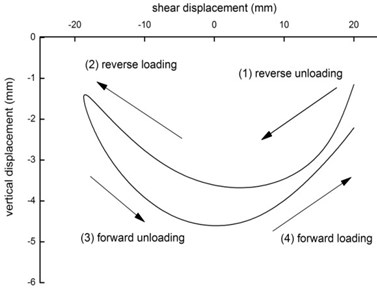 5.3.1. Influence of the number of cycles

Analyzing Fig. 8 and Fig. 9, the influence of the cycle number on the shear stiffness and damping ratio is obvious. Even if the cycle number reaches 1000, the parameters of the interface characteristics are still not stable. Moreover, the variations in the shear stiffness and damping ratio with the cycle number are closely related to the displacement amplitude and normal stress. That is, under different shear conditions, the development law of the interface parameters with the cycle number varies. To fully obtain the dynamic response of the reinforced soil structure, shear tests should be conducted under various working conditions and with a large number of cycles.

Fig. 8. Change in the shear stiffness with shear cycles 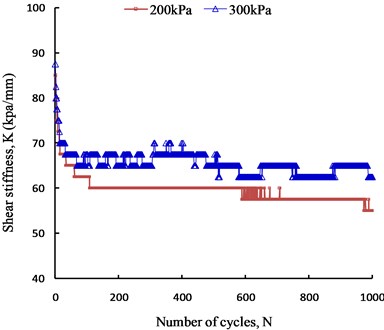 Fig. 9. Change in the damping ratio with shear cycles 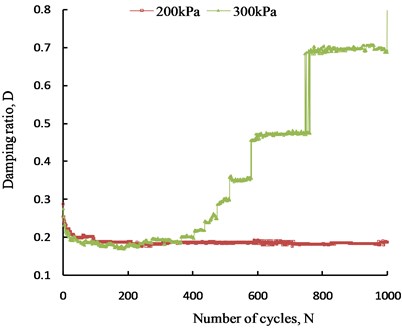 5.3.2. Influence of the displacement amplitude

The variations in the shear stiffness and damping ratio with cycle numbers at different shear displacement amplitudes (10 mm, 20 mm, 40 mm) are obtained by cyclic shear tests; the results are shown in Fig. 10 and Fig. 11 (normal stress is 100 kPa). 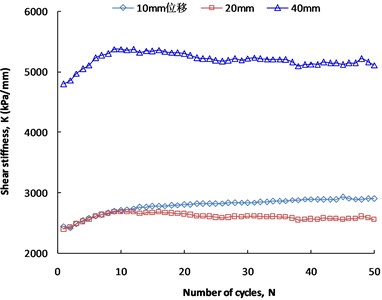 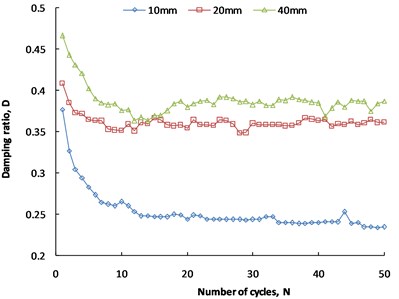 The relationship between the shear stiffness and damping ratio with the cycle number under different normal stresses (100 kPa, 200 kPa and 300 kPa) is obtained by cyclic shear at a small displacement amplitude of 2 mm, as shown in Fig. 12 and Fig. 13. 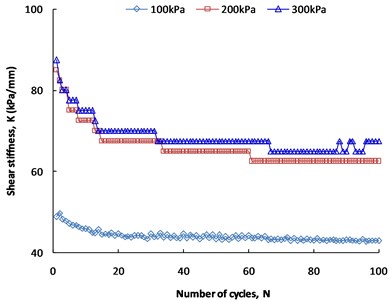 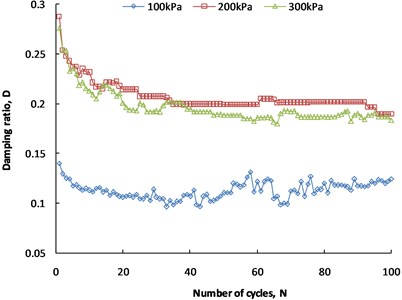 It should be noted that this study has discussed only the performance of coarse-grained soil against geogrid interface, and it is difficult to provide comprehensive guidance for engineering practice. Therefore, more large scale cyclic shear tests of different types of reinforcement materials and soil should be carried out in the future.