Copyright © 2020 Yanting Wang, et al. This is an open access article distributed under the Creative Commons Attribution License, which permits unrestricted use, distribution, and reproduction in any medium, provided the original work is properly cited.

Structural analysis is important in the design of a refuge chamber, which can ensure the structural safety of the refuge chamber in case of an explosion. In this paper, an indirect coupling method is utilized to calculate deformation of a refuge chamber under explosion, when gas explosion is simulated in a roadway model, and the pressure waves on different locations of chamber are extracted. The extracted pressure-time curves are applied to a detailed model of the refuge chamber to obtain deformation values. However, reliabilities and validities of the simulation results are not provided. Thereby, we conducted three groups of small-scale physical experiments for comparing the corresponding simulation results calculated by the indirect coupling method. Meanwhile, the theoretical values were obtained by the method of extracting the specific impulse. The results show that the simulation values fit well with the experimental and theoretical values. The process of applying a pressure-time curve to the model covers the specific impulse which acts on the prototype. This method can be used to calculate the deformation of complex equipment under explosion. 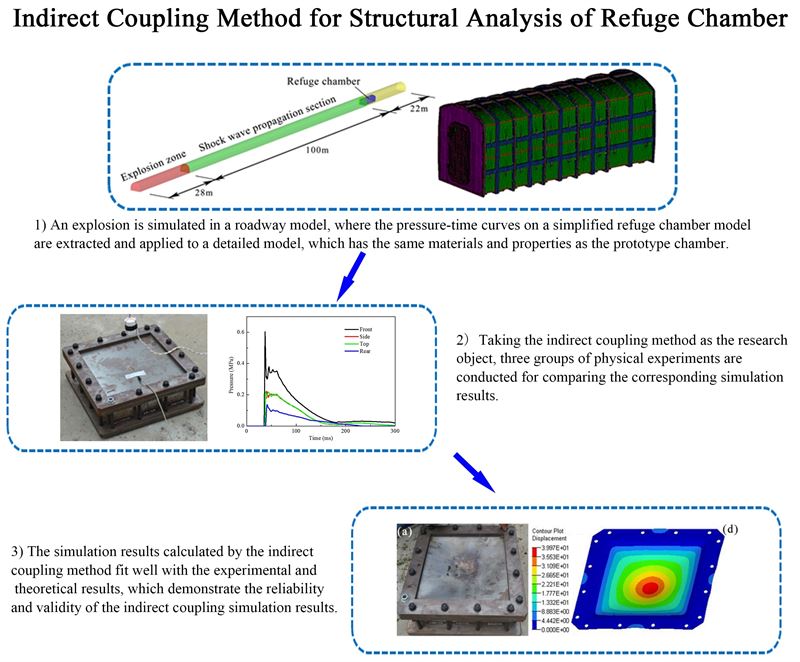 Refuge chamber is lifesaving equipment for underground coal mines that bear the explosion shock wave and high-temperature environment for a certain time. It is placed near the coal working face and can provide approximately 96 hours of breathable air, water, food, and supplies in an urgent event in which miners are unable to escape [1, 2]. Consequently, it is very important for the refuge chamber to keep stable and safe performances under serious explosion accidents. In order to ensure excellent properties of a refuge chamber, their strengths shall be tested before production and application through experimental verification, numerical simulation or theoretical analysis [3, 4]. Meanwhile, some standards relevant to the strength of the refuge chamber have been enacted and used in different areas of the world. For instance, in the United States, each chamber used in an underground coal mine resists 0.1 MPa pressure within 3 seconds [5]. In China, the front of the refuge chamber should resist at least 0.6 MPa within 300 ms [6].

In terms of explosion or impact loads on the refuge chamber, many studies widely apply a number of simulation ways but usually in a simplified form. For instance, in the preceding simulation stages of chambers suffering explosion, Zhan [14] and Li [15] calculated the deformation of the refuge chamber by simplifying impact loads into hydrostatic pressure. With researches advancing, the triangular [16, 17] and trapezoidal [18] pressure-time curves were taken as the loading conditions acting on refuge chambers in many studies. However, it is still worth noting that, the triangular and trapezoidal pressure-time curves demonstrate the equivalent loads summarized empirically by researchers. To overcome these shortcomings of simplified impact waves, a fluid-structure interaction analysis has been developed and used to simulate the explosion load against the refuge chamber [19, 20]. In fluid-structure interaction models, impact loads acting on chambers are obtained by simulating a realistic explosion source in roadway models. Li [21] conducted a physical explosion experiment of a refuge chamber, where the experimental displacements were compared with the results calculated by the fluid-structure interaction simulation methods. It demonstrated that the results calculated by the fluid-structure interaction method were close to the experimental results, and the results calculated by the equivalent triangular wave method were higher than the experimental results. Hence, this method is more regular nowadays to simulate impact loads, which are implemented on the surfaces of refuge chamber models.

Besides the attention to the simulation of impact loads, the simulation of a refuge chamber was also taken into consideration by researchers. Currently, some detailed models of refuge chamber were established with the application of pre-processing software such as HyperMesh, ANSA and Patran. The attributes of these fine models including flanges, glasses and bolts on chambers can be well endowed through some material models, such as type 3 (Plastic-Kinematic) [2, 22] and type 24 (Piecewise_Linear_Plasticity) [1, 16, 19, 23] in LS-DYNA. By comparing some different material models, Shi [24] found that type 24 was better to obtain steel deformation results closer to the experimental explosion values. On the basis of these studies, models of refuge chamber can well emulate an authentic steel structure.

In order to explore whether explosion simulation relevant to a refuge chamber fits to the experimental results, this paper contains some references and conducted researches, and has the following organization. First, the indirect coupling calculation process for the deformation of the refuge chamber is described. Second, based on the prototype chamber, three groups of small-scale physical experiments are carried out, and the simulation results are obtained. And then, a theoretical analysis based on the experiment is made. Finally, the measured phenomenon and parameters are discussed in detail, and several main conclusions are summarized.

In the explosion experiment, a refuge chamber is placed in a full-size roadway, which is a semi-circular arch shape model with a length of 150 m, a height of 2.6 m and a width of 3.2 m, as shown in Fig. 1(a). The 28 m section in front of the roadway model is the gas/air mixture zone to simulate an explosion, and the length of the shock wave propagation section is 100 m. The refuge chamber model is placed at 22 m from the rear end in the roadway model [6, 23], as shown in Fig. 1(b). As mentioned above, two calculation methods were utilized to analyze the dynamic response of the refuge chamber. 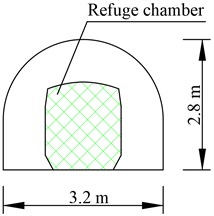 Fig. 2. a) Simplified model of refuge chamber and b) detailed model 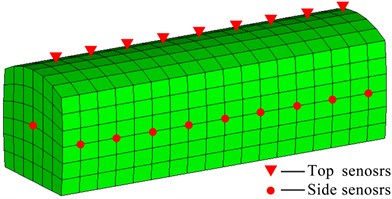 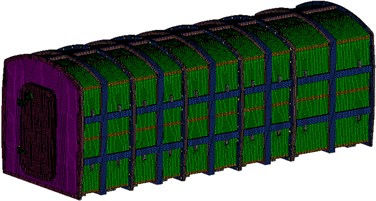 The indirect coupling method extracts pressure-time curves and applies to the corresponding location of a detailed refuge chamber model, where the dynamic response of different parts can be clearly observed. Nevertheless, as discussed above, the simulation results are not verified by the experiment. Here, taking the indirect coupling method as the research object, three groups of physical experiments are conducted for comparing the corresponding simulation results.

In the prototype chamber, the outer skin is made of Q235B low-carbon steel, which thickness is 6 mm, and the internal skeleton is made of steel rectangular tubes with a thickness of 3 mm, which forms a rectangular tube grid of 400 mm × 400 mm. Hence, the impact loads are resisted by the grids of combined outer skin with an internal steel skeleton. After weighing the feasibility against the complexity of an explosion experiment, a tube grid was taken as the experimental object.

The experiments were designed as follows. Three steel plates having the same material as the prototype chamber were constrained by a steel square frame. The impact loading was generated by the 8701 explosive [29], which were hung above the steel plates with different suspension distances. The detonation velocity and pressure of the 8701 explosive are 8315 m/s and 29.5 GPa, respectively. Three groups of experiments were carried out, and parameters are listed in Table 1.

A pressure sensor was installed in the center of the steel plate to record the impact loading. The whole experiment is shown in Fig. 3(a).

Fig. 3. a) Figure of experiment model appearance, b) finite element model with big size element, where the air model was not shown, the pressure wave was monitored by the sensor, and c) detailed model with load applied on it 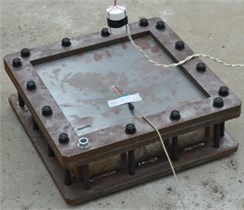 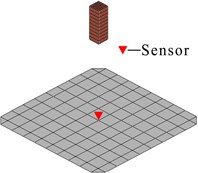 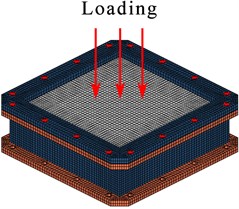 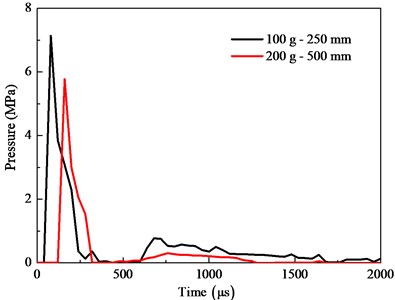 Next, the detailed models were established, and the plate was meshed with elements size of 10 mm, as shown in Fig. 3(c). The SOLID164 and SHELL 163 units were used in flanges and plates, respectively. The steel material adopts the Piecewise_Linear_Plasticity model [23], and all parameters of different models were set the same as the prototype chamber (see Table 2). The total calculation time was 2000 μs, and time step was 10 μs.

Then, the extracted pressure-time curves were applied to the detailed model, and the deformation of plates was measured.

Through the indirect coupling method, the pressure-time curves on the different location of the refuge chamber are monitored by numerical sensors, as shown in Fig. 5. 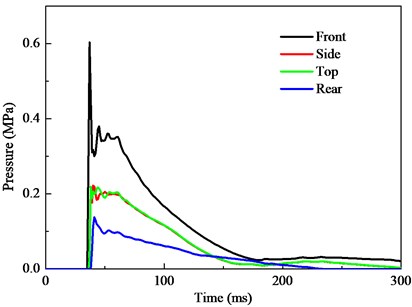 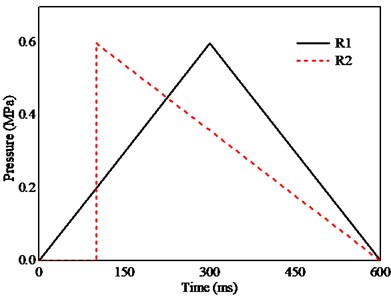 Considering Fig. 5, it becomes apparent that the shapes of monitored pressure-time curves are different from triangular waves. The difference between the direct coupling method and the indirect coupling method is that the latter extracts the pressure-time curves during the simulation process. A physical parameter, i.e., specific impulse, which describes the peak pressure, and the action time is introduced to verify the rationality of the extraction. The physical meaning of specific impulse is the impulse per unit area [33, 34], and the value is an area in the pressure-time curve [35].

where is a dimensionless proportional coefficient, and is an undetermined constant.

The variables have dimensions , , , and . The value is expressed in terms of these variables:

Equating exponents on both sides, it has:

An empirical equation was proposed by Zhao [34], and was then used to solve the specific impulse generated by the explosive explosion:

where is the distance of the plate from the explosive center, is the quality of TNT explosive, and is the impulse correction coefficient. Eq. (7) can be expressed as:

The experimental graphics and simulation cloud pictures are shown in Fig. 6. The maximum stress values of plates in groups I, II and III were 312.6, 374.7 and 282.5 MPa, respectively, which were less than the failure strength (411 MPa) of steel. No breakages were observed in the plates.

As Fig. 6 shows, the largest deformation occurred in the middle area of the plate. The difference between the experimental, simulation and Eq. (9) values is illustrated in Table 3.

Fig. 6. a)-c) are experimental photos after explosion, and d)-f) are simulation results of plates 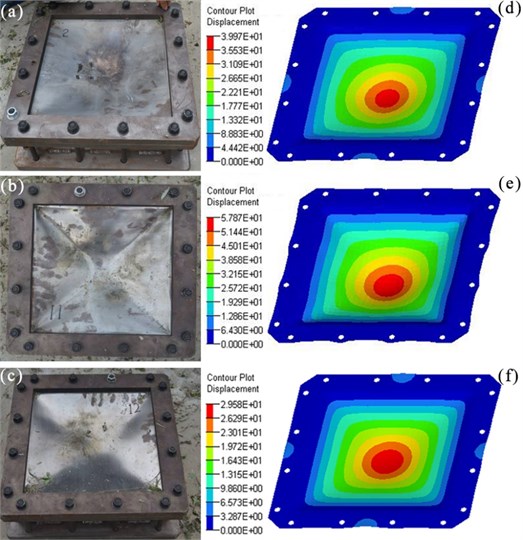 The error, which maximum is about 10 %, shows that the numerical simulation results have a good agreement with the results of the experiment and Eq. (9). It indicates that the indirect coupling method simulates quite accurately the deformation process of the refuge chamber under an explosion.

The structure strength of a refuge chamber can also be optimized by the indirect coupling method. That is, the structure stiffness can be enhanced when the deformation in an area is larger than the design value. In contrast, it is weakened to reduce the weight and save costs.

3) In the indirect coupling method, the process of applying a pressure-time curve to the model is equivalent to the specific impulse on the prototype, which is the area encompassed by the pressure-time curve. As an empirical equation, Eq. (7) can be utilized to calculate the deformation of the steel plate under an explosion.

In a future research, a large-scale physical experiment is tested in the laboratory to further assess the reliability of results calculated by the indirect coupling method.

The authors would like to thank Shiping Fan, Jianping Li, Jianyu Gong, Long Shi, Chao He, Yiyi Hao, Yakun Zhang and Zhisheng Liu for the preparation of the explosion experiments.