Copyright © 2020 Siyu Wang, et al. This is an open access article distributed under the Creative Commons Attribution License, which permits unrestricted use, distribution, and reproduction in any medium, provided the original work is properly cited.

Considering multiple nonlinear parameters, a nonlinear dynamic model of star gear-rotor-bearing transmission system of GTF (Geared Turbofan Engine) gearbox is established. The dynamic responses are obtained through Runge-Kutta numerical integration method, and the responses with the variation of input rotational speed are analyzed and illustrated. The abundant nonlinear characteristics are presented in the results, which could be guidance to avoid undesirable nonlinear motion, and provide a reference for the design and control of the transmission system in GTF gearbox.

In this paper, a coupled lateral-torsional nonlinear dynamic model of GTF gearbox is proposed, the influence of input rotational speed on the vibration response of the system is explored and quantified, then the nonlinear behavior is studied by analyzing the states of motion, mechanisms of bifurcation, and roads to chaos.

Fig. 1(a) and (b) show the physical structure and schematic diagram of star gear-rotor-bearing transmission system of GTF gearbox, which is composed of star gearing system, input shaft (the rotor between low-pressure compressor and sun gear), output shaft (the rotor that connects ring gear and fan), and bearings that support input and output rotor. The star gearing system is composed of sun gear, star gear, ring gear, and planet carrier, among which, the star gears are supported by bearings, and meshed with sun gear and ring gear, both of which are semi-floating components that splined with input and output shaft, respectively. 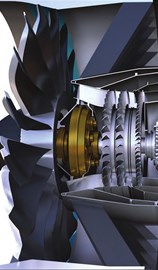 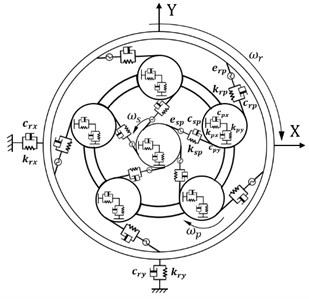 where , is the nonlinear function of backlash.

The system has a total of DOFs, where is the number of star gears, then the overall arrays of displacement can be expressed as:

The dynamic equations of the transmission system in GTF gearbox can be derived as follows:

where, is the moment of inertia, is the radius of base circle.

Then the derived dimensionless parameters can be defined as:

where, is the dimensionless parameter of displacement.

The basic parameters used for calculation of the nonlinear vibration response of the GTF transmission system are shown in Table 1.

The vibration response of the gear system in the lateral displacement of star gear were analyzed at three input rotational speeds of 81000, 9300, and 10800, the results are shown in Fig. 4, from which different dynamic characteristics in various speed can be observed. When the control parameter 8100, the system response is dominated by the meshing frequency , the amplitude of which is much bigger than the response of other orders of meshing frequency, besides the meshing frequencies, the variable bearing stiffness frequency appears. The Poincare map that obtained shows a cluster of concentrated points when 8100, while several coincident circles are illustrated in the corresponding phase diagram, therefore, the nT-periodic motion is indicated for the system. As the control parameter 9300, although meshing frequency is still the dominant response, the multiplication frequency components of variable bearing stiffness frequencies as , , , can be observed. The Poincare map turns to be a phase-locked loop, and a trajectory torus is presented in phase diagram. The characteristic demonstrate that the gear system turned into quasi-periodic motion. As the control parameter arrives at 10800, a disordered set is shown in the Poincare map, and the corresponding phase diagram becomes a chaotic attractor with a random crew, thus, the chaotic motion is indicated for the system. In this situation, the meshing frequency is no longer the dominant response, which is replaced by the bearing stiffness frequencies and , then the multiplication of bearing frequency components , also appears with more obvious amplitudes. 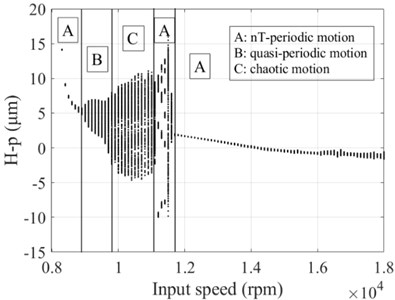 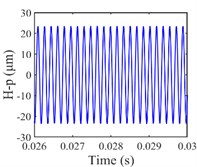 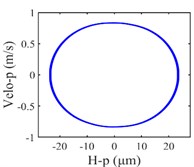 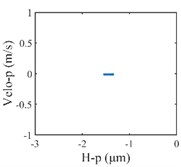 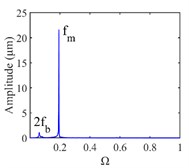 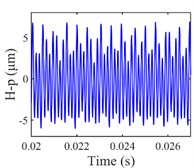 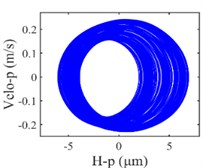 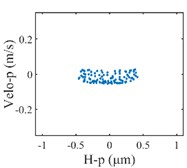 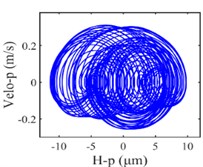 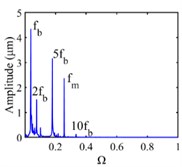 The authors are grateful for the financial support provided by the National Natural Science Foundation of China under No. 51775265. In addition, the authors declare that there is no conflict of interests regarding the publication of this article.