Copyright © 2020 Siyu Wang, et al. This is an open access article distributed under the Creative Commons Attribution License, which permits unrestricted use, distribution, and reproduction in any medium, provided the original work is properly cited. 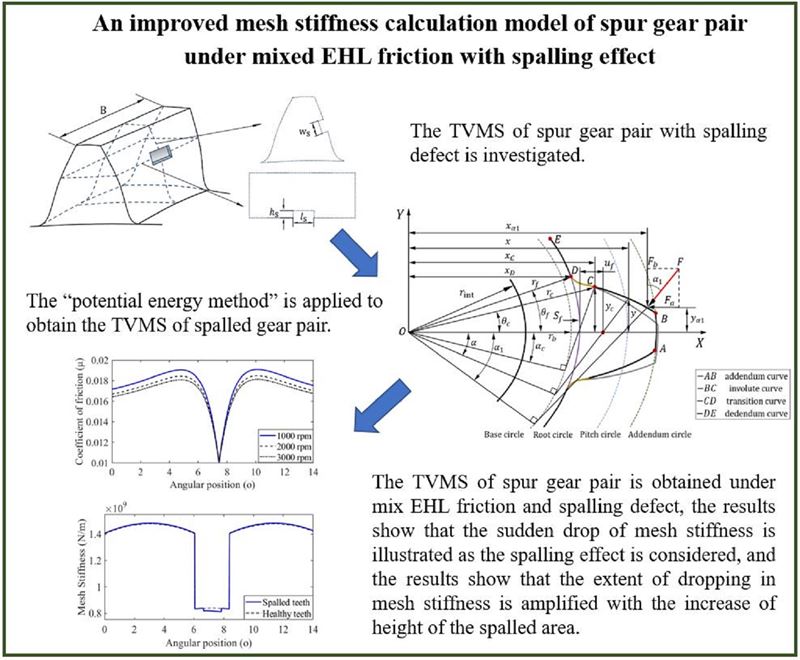 Time-varying meshing stiffness (TVMS) is an important stimulating factor of the gear system, the vibration and noise of the gear system are greatly affected by the meshing stiffness. Therefore, in order to obtain the TVMS in accurate and efficient way, many improved and modified methods have been proposed. The analytical method to calculate the gear tooth deflections was proposed in [1]. The nonlinear Hertzian contact stiffness was proposed based on [2]. Yang et al. [3] studied gear impact dynamics with Hertzian damping, tooth friction, and bending stiffness. Zhu et al. [4] designed a program to predict the lubrication features, friction, surface stress and flash temperature based on measured 3D surface roughness. Castro et al. [5] obtained the coefficient of friction in mixed film lubrication based on the model of gears with discs. Chaari et al. [6] studied the mesh stiffness and dynamic response of a spur gear system under the effect of spalling and tooth breakage. Chen et al. [7] conducted dynamic simulation of spur gear, in which the tooth root crack propagates along tooth width and crack depth. Kiekbusch et al. [8] calculated the torsional mesh stiffness of spur gears based on 2D and 3D FE models. Chen et al. [9] conducted dynamic analysis for the spur gear with crack in the gear tooth, and the crack depth on the system response was also analyzed. Wan et al. [10] improved the calculation process of mesh stiffness, and the dynamic model of gear-rotor system was proposed considering tooth root crack. Ma et al. [11] proposed a dynamic model for cracked spur gear, then the time-varying stiffness was calculated based on the model. Wang et al. [12] built a model of spur gear pair with profile error, and then the mesh characteristics were studied. Liang et al. [13] evaluated the mesh stiffness of planetary gear set under the influence of crack. Saxena et al. [14,15] studied the influence of shaft misalignment and friction on the mesh stiffness of spur gear pair. Ma et al. proposed improved time-varying mesh stiffness model of spur gears under cracked effect [16], and with tip relief [17].

In the paper, the mesh stiffness calculation model of spur gear pair with spalling effect is proposed, in which the exact involute and transition curves of gear teeth, the nonlinear Hertzian contact stiffness, modified fillet-foundation stiffness, mixed EHL friction coefficient are fully considered.

The tooth profile of the spur gear enters and leaves contact simultaneously along the entire width of the end face. Therefore, when the tooth profile comes into and out of contact, this will cause sudden loading and unloading on the teeth. As a result, vibration and noise are generated.

Under mixed EHL condition, the synthesized coefficient of friction can be obtained throught following expression [5]:

For the full film lubrication condition [18], the coefficient of fiction can be calculated by:

where, are constant coefficients that shown in Table 2, indicates the slide-roll ratio, indicated the maximum Hertzian pressure, presents the absolute viscosity, and denotes the effective curvature radius, denotes the suction speed at the contact point.

where, , , , , , can be described in function of angles , , [16]. In the of double operators and in above expressions, the upper operators represent the approach process, the lower operators represent recess process. The cross-sectional area of spalling area can be expressed as , and the corresponding moment of inertia of the section can be calculated by . 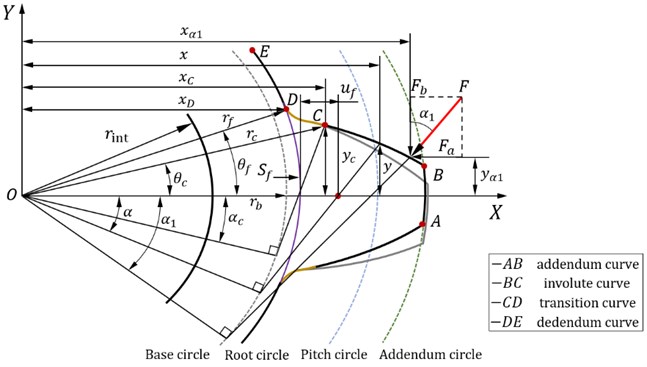 Due to the nonlinear contact force between gear tooth, the Hertzian contact stiffness is nonlinear in principle. The analytical method is applied to express the nonlinear Hertizian contact [2], therefore, the approximate formula is drawn as follows:

where, is the tooth width of spur gear, is the pressure angle acting on gear tooth, and are illustrated in schematic diagram, the coefficients , , can be obtained from the polynomial functions proposed in [1].

In the actual condition, one gear body support multiple gear tooth in meshing, therefore, higher value of mesh stiffness is obtained, that compared with the actual value in multiple-tooth meshing.

An improved analytical method based on FEM simulation is proposed [17] to eliminate the deviation, which can be expressed as:

where, denotes the correction coefficient for fillet-foundation stiffness, and indicate the driving, driven gear, respectively, and presents the number of gear pairs in meshing.

The basic parameters of the spur gear pair that used for improved TVMS calculation model is shown in Table 1.

Fig. 3. The coefficient of friction for varying rotational speed 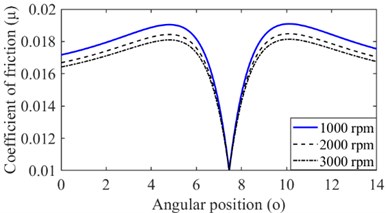 Fig. 4. The mesh stiffness under EHL friction: a) original, b) amplified 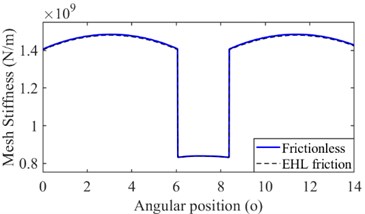 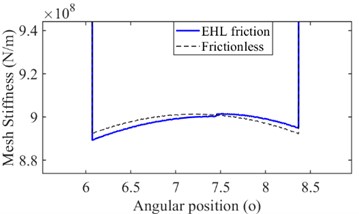 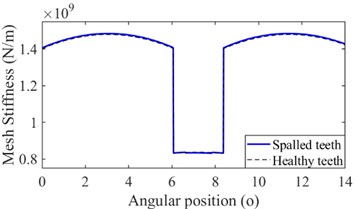 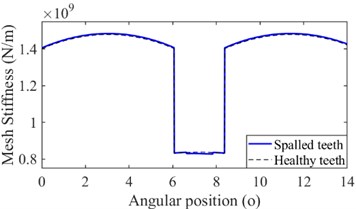 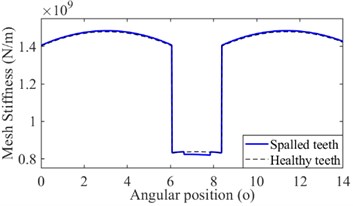 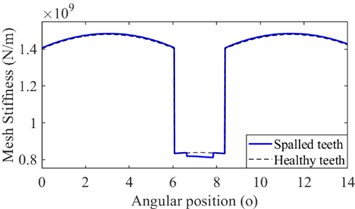 In this paper, the improved mesh stiffness calculation model that considered friction force excitation that obtained from the mixed EHL model, in addition, the spalling effect of the spur gear pair are also studied.

Form the results of numerical simulation, the mesh stiffness, especially in single teeth meshing, shows similar pattern as the evolution of friction coefficient. The sudden drop of mesh stiffness is illustrated as the spalling effect is considered, and the results show that the extent of dropping in mesh stiffness is amplified with the increase of height of the spalled area.