Copyright © 2021 Fei Guo, et al. This is an open access article distributed under the Creative Commons Attribution License, which permits unrestricted use, distribution, and reproduction in any medium, provided the original work is properly cited.

The bridge structures will bear dynamic loads except for constant loads during their service period, and the vehicle load is a most common dynamic load. The researches on the dynamic responses of the system are called vehicle-bridge coupling problems [1-5]. The impact coefficient, a dynamic amplification coefficient, reflects the magnitude of the impact action, is of great importance to the safety of bridge structures, especially when the bridge vibration frequency and the vehicle frequency are equal (resonance is occurred). Many researches on the vehicle-bridge coupling vibration responses and the dynamic impact coefficients have been conducted so far, the research contents are mainly focused on the establishment of numerical model [6-8], arithmetic [8-13], the influence of cross section type of beam [14], bridge deck roughness[15, 16], vehicle stiffness and damping [17-20], speed [15, 20], wind [21], randomness of influence factors [21], deceleration [8] and soil properties [7] on the dynamic responses of vehicle-bridge coupling system. Besides, the types of bridge such as PC simply supported box girder bridge with corrugated steel webs [22, 23], highway bridges [24], railway bridges [20] and cable-stayed bridge [25] are also involved.

The aforementioned researches have enriched and improved vehicle-bridge coupling problems. However, the current researches mainly focus on the RC straight-line beam bridge, the researches on the curved beam bridge and steel-concrete composite beam bridge are still limited. Besides, some of concerned researches simplify vehicle model as moving load model without considering the contribution of vehicle stiffness and damping to the system. Moreover, replacing the moment and shear force impact coefficients with the displacement impact coefficient can’t real reflect the mechanic behavior of the structures under vehicle dynamic loads. In view of this, a numerical model of vehicle-bridge coupling is proposed in this study to calculate the dynamic responses of a straight-line π-shaped composite beam and a curved box girder beam, where the effect of lane numbers, bridge surface flatness, vehicle speed, vehicle weight and primary beam stiffness on the impact coefficient are considered. In addition, the local and global impact coefficients, the displacement, moment and shear force impact coefficients are also comprehensively discussed.

Table 1. The details of vehicle parameters [26]

The schematic diagram of vehicle-bridge coupling is shown in Fig. 2 [27]. Based on the Hertzian spring contact model, the element node of bridge deck is coupled with spring element node of tire. The details are as follows.

Fig. 2(a) shows the coupling principle for the smooth bridge surface. The high order displacement interpolation functions are utilized, the equations for vertical displacement are given by:

where and are vertical displacement interpolation functions, and are angle interpolation functions, is the length of an element, is the distance from the tire to the element node. Assuming that the tires are in close contact with the bridge deck and there is no separation between them during the whole driving process, the vertical displacement of the tire is given by:

a) The bridge surface is smooth

b) The bridge surface is rough

However, the rough bridge surface as shown in Fig. 2(b) will cause the separation between tire and bridge surface, and then contact again, leading to great impact force on the bridge surface. Herein, the random irregularity function is introduced, and the vertical displacement of tire is given by:

The random irregularity function is created by harmonic wave superposition method in the present work, and it is shown as Eq. (8):

where is the amplitude of th sine wave, is the spatial sampling frequency point, is the longitudinal location of bridge surface, is the random phase angle within the range of (0, 2). The power spectral density function is adopted to describe the random irregularity, and it is shown as Eq. (9): 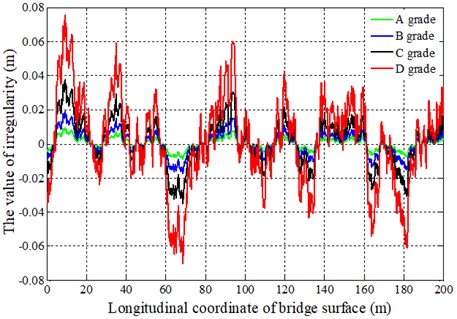 The Rayleigh damping is adopted in the present work, and it is given by:

where the subscripts and denote vehicle and bridge respectively, , , are acceleration, velocity and displacement respectively. The dynamic responses can be obtained through Newmark- method as shown in Fig. 4.

The cross section of a continuous steel-concrete composite beam with 4 spans is shown in Fig. 5. The single span is 35 m and the total span is 140 m. The thickness of concrete (C40) slab is 35 cm. The transverse connection between the two primary beams is strengthened by a crossbeam with a standard spacing of 5 m.

The vehicle-bridge coupling finite element model is established by ANSYS. The bridge deck slab is simulated by SHELL 63 element, the primary beam and the cross beam are simulated by BEAM 188 element. The vehicle body is simulated by MASS 21 element, the suspension and tire are simulated by the COMBIN 14 element. In order to save calculated time, the element stiffness matrix [] and mass matrix [] are extracted from finite element model, and the Newmark- method is adopted on MATAB to obtain dynamic response. In order to validate the reliability of the numerical model of vehicle-bridge coupling, the traditional theoretical-analytical method is also applied as shown in Eq. (12):

Fig. 6. The displacement responses at mid-span

The displacement responses at mid-span are shown in Fig. 6, and the results calculated by traditional theoretical-analytical method are also plotted in Fig. 6. As illustrated in Fig. 6, when the vehicle is in the middle of first span, this position certainly obtains the maximum displacement. Meanwhile, there are also extreme displacement values in the middle position of other spans, and the farther they are from the vehicle, the smaller the extreme displacement values. This is consistent with the principle of influence line. Besides, the dynamic responses predicted in the present work agree well with the theoretical-analytical method results, which can validate the reliability of the vehicle-bridge coupling model.

where , are respectively the peak dynamic response and peak static response. They can be displacement, strain, moment or shear force et al. In this section, the vertical displacement is adopted to analyze the influence of parameters on the impact coefficient.

The previous findings demonstrate that the numbers of lanes have effect on the dynamic response of bridge. Fig. 8 shows the impact coefficients of single lane and double lanes at the speed of 100 km/s.

Fig. 8. The effects of the lane on the impact coefficients

3.1.2. The effect of bridge surface flatness

In practical engineering, the maintenance of bridge deck should be regularly carried out to prevent the bad flatness of bridge surface due to the natural ageing materials.

Fig. 9. The effects of the bridge surface flatness on the impact coefficients

a) The first span

b) The second span

At present, there are few researches on the dynamic response of curved beam bridge under vehicle load. Fig. 10 shows the sectional size of a PC simply supported curved box girder. The longitudinal span is 60 m, the curvature radius 1000 m, the Young’s modulus 3.4×104 MPa, the density 2500 kg/m3.

The dynamic responses of the curved box girder are shown in Fig. 11 to Fig. 13. As illustrated in Fig. 11, the numerical results of vertical displacement in this study agree well with the theoretical results. 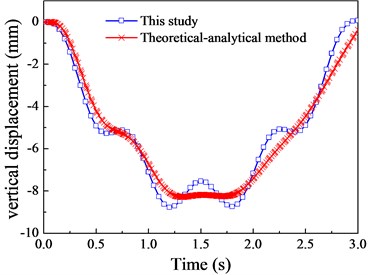 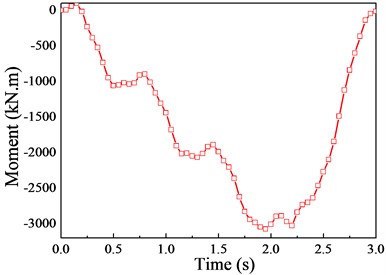 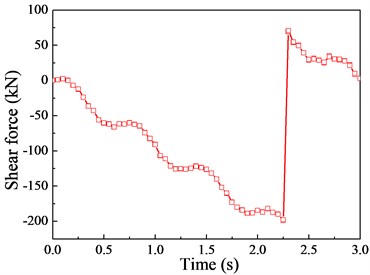 Although there are a few deviations in local regions between them, the variation trends are basically the same. This is mainly attributed to the fact that there is no moment of inertia in the theoretical-analytical method (moving load model), leading to the smooth displacement curve. Besides, the responses of displacement and moment reach their peak near the mid-span cross section, therefore, the mid-span cross section will be chosen for the following analysis according to the preliminary calculation and comparison of the impact coefficients.

Fig. 14. The effects of the vehicle speeds on the impact coefficients

The impact coefficient calculating formulas in the General Specification for Design of Highway Bridges and Culverts (JTG D60-2015)[29]are shown as following equations:

where is the fundamental vibration frequency of the simply supported beam bridge. The impact coefficient of the box girder bridge calculated by Eq. (14) is 0.061 (1.544 Hz), which is significantly smaller than the result in this study. The difference between them is great, especially for the shear force impact coefficient. This indicates that it’s not reasonable to only define the impact coefficient as the function of fundamental vibration frequency of the bridge structure, and the influence of vehicle speed should be also considered.

3.2.3. The effect of primary beam stiffness

A vehicle-bridge coupling model is proposed to calculate impact coefficient of a straight-line -shaped composite beam and a curved box girder beam. Based on the results and discussions presented in this paper, the conclusions can be drawn as follows:

The present work is supported by the National Natural Science Foundation of China (51478397), we would like to express our gratitude to it.