Copyright © 2021 Jinsheng Wen, et al. This is an open access article distributed under the Creative Commons Attribution License, which permits unrestricted use, distribution, and reproduction in any medium, provided the original work is properly cited.

As road and bridge construction industry becomes more prosperous, the vehicle’s speed and load capacity increase significantly. This paper aims at the problem of vehicle-bridge coupling vibration of highway bridges. In this paper, based on the basic theory of vehicle-bridge coupled vibration, the differential equation of vehicle-bridge coupled system is obtained. The mode decomposition method is adopted to transform the system differential equation into a matrix form. The second-order development function based on the built-in function was written by the principle of Runge-Kutta method, and the second-order time-varying differential equation group was solved. Taking the simply supported beam as an example, this paper studies the dynamic characteristics of bridge and vehicle under different speed and mass.

With the increasing prosperity of bridge construction in recent years, the remarkable improvement of driving speed and load capacity, the bridge structure's weight is gradually reduced, the stiffness is more flexible, and the span is larger. The influence of the geometric nonlinearity of bridge structure on vehicle-bridge coupling vibration is rarely considered in many vehicle-bridge coupling vibration studies.

Based on the principle of Runge Kutta’s method, the quadratic development function is compiled in this paper. The influence of geometric nonlinearity of the bridge can be more realistic to analyze the dynamic response of the structure. It is of great theoretical and practical significance in the design and construction of the bridge structure.

2. Establishment of system equation considering the geometric nonlinearity of the bridge

The systems can be simplified as Fig. 1. Where the , represents for the mass of body and tire respectively, the , represent for the Stiffness and damping respectively, and the means the time history of external load. The speed and time are used to represent the position of the body on the bridge at a certain time.

Firstly, the dynamic equilibrium equation of the supported beam can be described as:

According to the equilibrant above , the dynamic equilibrium equation can be directly derived:

The external load acting on the beam can be expressed as Eq. (3):

Based on the basic theory of coupled vibration of vehicle and bridge, the mode decomposition method is used to transform into the following equations:

The left end of the Eq. (4) can be transformed into:

Eq. (6) can be obtained by sorting out the above equations:

Similarly, the same methods are used in Eq. (2), and it can be written as:

By combining Eq. (6) with Eq. (7), the vehicle-bridge coupled vibration system’s dynamic balance equations can be obtained.

For supported beam systems, the -th matrix equation can be expressed as:

is used to describe the non-linear matrix, which can be written as:

3. Dynamic influence of common factors on the bridge

When cars pass over the bridge, vehicles passing at different speeds will cause changes in the bridge’s dynamic impact; also, the resonance will be caused when the vehicle’s external load frequency to the bridge is close to the natural frequency of the bridge.

As can be seen from Fig. 2, the vertical acceleration of vehicle M2, which is a critical index affecting the vehicle stationary running, increases gradually as the speed increases.

Fig. 2. Comparisons of the dynamic response of the mid-span at different speeds

a) The dynamic response of mid-span 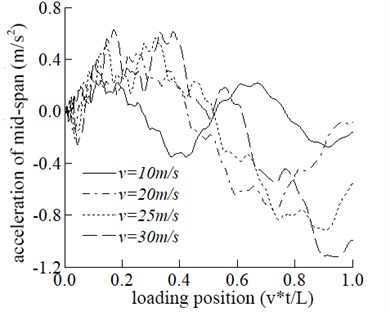 b) The acceleration of mid-span 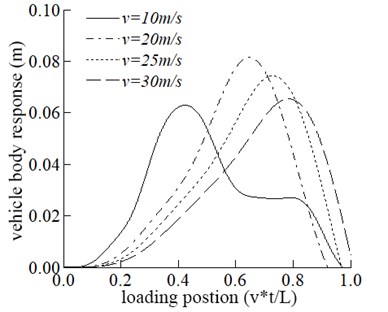 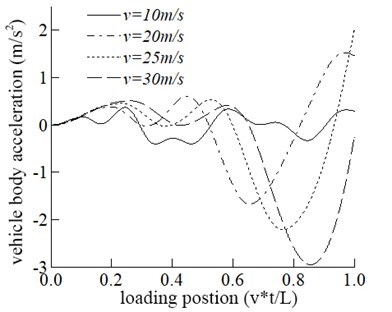 Fig. 3. Comparisons of the dynamic response of the mid-span at different mass 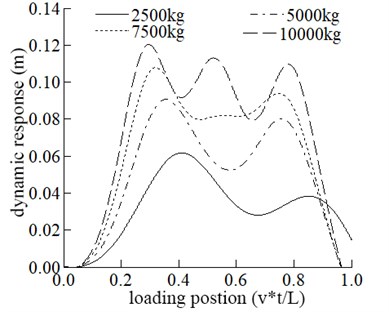 a) The dynamic response of mid-span

b) The acceleration of mid-span 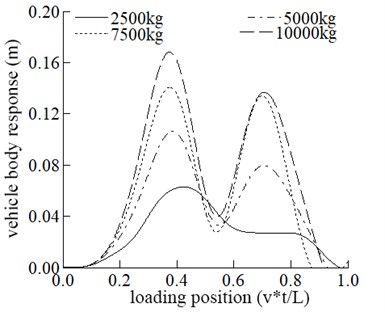 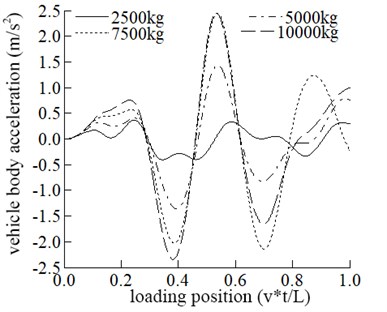 In this paper, the influence of bridge geometric nonlinearity on a vehicle bridge coupling system's dynamic response is considered, and the equilibrium differential matrix equation is established. Matlab carries out numerical analysis of the system. The following conclusions are obtained.