Copyright © 2020 Zhijun Ni, et al. This is an open access article distributed under the Creative Commons Attribution License, which permits unrestricted use, distribution, and reproduction in any medium, provided the original work is properly cited.

Based on the theory of vehicle-bridge coupling vibration, the differential equation of vehicle-bridge coupling system is set up according to different conditions. The differential equation of the system is converted into matrix form using mode decomposition method and is solved using MATLAB. The system equation has a non-linear matrix term when the geometric nonlinearity of the bridge is considered. The influence of wheel acceleration on the dynamic response of the bridge is analyzed without simplification under four speeds. The results show that it is acceptable to neglect the influence of wheel acceleration at low speeds, but it has a significant influence which must be considered at high speeds.

With the remarkable and increasing span and vehicle load of bridges, as well as the gradually decreasing mass and stiffness of bridge structures, much attention has been focused on the complexity and diversity of vehicle-bridge coupling vibration.

The influence of the geometric nonlinearity of the structures on the vehicle-bridge coupling vibration is important, especially for long-span and low-mass bridges. Considering the geometric nonlinearity of the bridge, it can be more realistic to analyze the dynamic response of the structure, which is of great theoretical and practical significance in the design and construction of the bridge structure.

2. Establishment of system equation considering the geometric nonlinearity of the bridge

The main derivation process of the differential equation is as follows. First, the dynamic equilibrium equation of a simply-supported beam can be written as Eq. (1):

The dynamic equilibrium equation of can be written as:

The external load acting on the beam can be expressed as Eq. (3):

According to the mode decomposition method, the right end of Eq. (3) can be transformed into:

The left end of the Eq. (1) can be transformed into:

Similarly, using the mode decomposition method, the Eq. (2) can be written as:

By combining Eq. (6) and Eq. (7), the system dynamic equilibrium equations of the vehicle coupling with the simply-supported beam are obtained. The th order matrix expression of the system motion equation is:

According to the mode decomposition method, the right end of Eq. (6) can be obtained and converted into the following equations:

The th-order matrix expression can be expressed as follows:

4. Effect of velocity on dynamic response of bridge without simplifying wheel acceleration

In this section, the influence of wheel acceleration on the bridge’s dynamic response is analyzed without simplification under four speeds: 20 m/s, 25 m/s, 30 m/s and 35 m/s. The calculating model of Eq. (12) is defined as Model A, and the model neglecting () and () is defined as Model B. Fig. 2 shows the vertical displacement response of the two models at different speeds. The maximum displacement of the structure and the maximum displacement ratio of the two models are shown in Table 1.

Table 1. The dynamic responses of the bridge structure

Fig. 2. Comparisons of dynamic response of the mid-span at different speeds 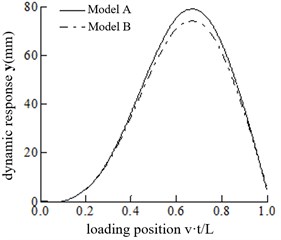 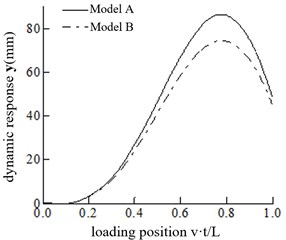 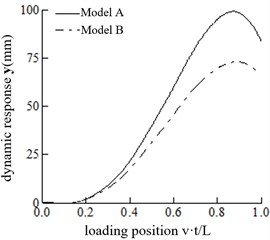 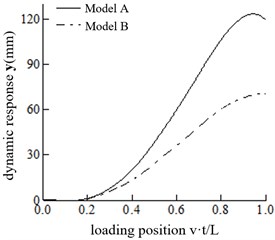 It can be observed that increases continuously with the increasing velocity. However, changes slightly with the increase in velocity, varying between 70 mm and 75 mm. With the increase in velocity, the position of the maximum mid-span displacement gradually recedes for both Model A and Model B. When the speed is 35 m/s, the maximum mid-span displacement of Model A and Model B occurs when the vehicle is about to leave the bridge.

In this paper, the effect of the geometric nonlinearity of bridges on the dynamic response of the vehicle-bridge coupling system is taken into account, and the following conclusions are obtained:

(2) The value of the non-linear matrix will increase as the inertia moment decreases when the other conditions remain unchanged.