Copyright © 2021 Alaa A. El-Bary. This is an open access article distributed under the Creative Commons Attribution License, which permits unrestricted use, distribution, and reproduction in any medium, provided the original work is properly cited.

A novel mathematical model of thermoelastic of a homogenous isotropic solid cylindrical infinite medium has been constructed in this paper. Thermally shocked is the bounding surface of the cylinder. In the sense of the hyperbolic two-temperature generalized thermoelasticity with fractional stress theory, the governing equations have been taken. Different values of the fractional order and two-temperature parameters have shown numerical results for the dynamical and conductive temperature increment, strain, displacement, and average stress, which are graphically applicable to all the functions studied. The fractional-order parameter has significant effects on stress and displacement distributions, while it has little effect on the dynamical and conductive temperatures increment and significant effects on all studied functions as well as on the two-temperature parameter. The two-temperature hyperbolic model is precious and effective.

Finding the best mathematical model that simulates the behavior of these materials close to experience is one of the key problems in materials and solid sciences. The mathematical model produces results that are completely consistent with experimental findings, and researchers in this area are primarily interested in the physical behavior of these compounds. Various mathematical models have been proposed by scientists and researchers to explain the propagation of mechanical waves and heat in solid and elastic materials. However, not all these models are suitable, since one of the metrics of an ideal model is to include the speed of progression of mechanical and thermal waves with finite values as experimental results. Mathematical models of thermomechanical transformation through elastic materials involve a large amount of space that cannot be included in a single study. However, new models that seek to demonstrate new observations that are very close to laboratory studies and are generally consistent with the physical behavior of thermo-elastic materials should be discussed.

Additional new models of thermoelasticity based on the fractional calculus principle were introduced. Magin and Royston [10] have introduced the first model that applies the fractional deformation derivative characterizing the material's behavior. The zero-order of the derivative is for a Hookean solid while the one-order is for a Newtonian fluid. The thermoelastic and thermoviscoelastic materials are sitting in the intermediate range with a fractional order parameter between zero and one [10]. C Li et al. studied the generalized thermoelastic diffusion problems with fractional-order strain [11, 12]. Li, Chenlin, et al. studied the generalized piezoelectric thermoelasticity problems with strain rate and transient thermo‐electromechanical responses analysis [13].

Recently, many applications used the fractional-order definition with various construction and different models [14-22]. Depending on the fractional strain, Youssef [23] presented another new theory of generalized thermoelectricity. It is seen as another shift in the stress-strain relationship between Duhamel and Neumann. Youssef solved an application of thermoelasticity with fractional order strain for a one-dimensional half-space, in the context of models of Biot, Lord-Shulman, Green-Lindsay, and Green-Naghdi type II [23]. Youssef solved many applications of thermoelasticity of infinite thermoelastic cylindrical medium [8, 24].

In the present investigation, we will study the induced conductive temperature, dynamic temperature, deformation, displacement, and stress fields in a thermoelastic one-dimensional infinite cylindrical body. The work under the purview of the theory of thermoelasticity with fraction order strain is based on hyperbolic two-temperature heat conduction laws.

The main target of this work is to discuss and study the effects of the fractional-order strain parameter and hyperbolic two-temperature parameter on thermomechanical waves through a thermoelastic body.

Consider a perfect thermal conducting, isotropic, elastic, and cylindrical body occupies the region . We apply a cylindrical coordinates system in which the -axis was lying along the axis of the cylinder, as in Fig. 1, and due to symmetry, the medium is one-dimensional. Moreover, all the state-functions will depend on the radial distance and the time . It is proposed that there are no body forces or heat sources in the medium and initially at rest.

Thus, the governing equations in cylindrical one-dimensional with fractional order strain can be written as [8, 24].

The equation of motion:

where (m/s) is constant (two-temperature parameter).

The constitutive relations will take the forms:

and is the volume dilatation and satisfies the relation:

In the above equations, we apply the definition of the Riemann–Liouville fractional integral written in a convolution type form :[25]

which gives Caputo fractional derivatives in the form:

For convenience, we will use the following non-dimensional variables [8, 24]:

Eqs. (1)-(6) take the following forms (the primes are suppressed for simplicity):

We apply the Laplace transform defined as:

The Laplace transform of the fractional derivative is defined as [25]:

We assume the following initial conditions:

where is the modified Bessel function of the first kind of order zero, and , are the roots of the characte, ristic equation:

For the thermal boundary condition, we consider the edge of the cylinder to be thermally loaded as follows:

where is the function of the thermal loading and is constant (the thermal loading strength). For the mechanical boundary conditions, we consider the edge of the cylinder is connected to a rigid foundation which can prevent any displacement which leads to zero volumetric deformation as follows:

Applying the boundary conditions in the Eqs. (37) and (38), we get the following system:

We use the well-known relation of Bessel integration as follows:

where is the modified Bessel function of the first kind of first order.

To get the stress distribution and to avoid the singularity when , we take the average of the three principal stresses components as follows:

The conducting and dynamical temperature increments, pressure, displacement, and average stress can both be measured using Riemann-sum approximation techniques over time. This method is used to invert some function’s Laplace transformation [26]:

where “” is an imaginary number unit, and “” is the real part. For convergence with a faster process, many numerical experiments have shown that the value satisfies the relation [26].

The numerical results of the conductive and dynamical temperature increments, the strain, the displacement, and the average stress distributions have been figured for a wide range of the dimensionless radial distance at the instant value of dimensionless time 1.0.

In Figs. 2-6, the calculations have been carried out for various values of the fractional-order parameter in the context of the hyperbolic two-temperature thermoelasticity model to stand on the effect of this parameter on all the studied functions.

Fig. 2. The conductive temperature distribution with the variance value of the fractional-order parameter 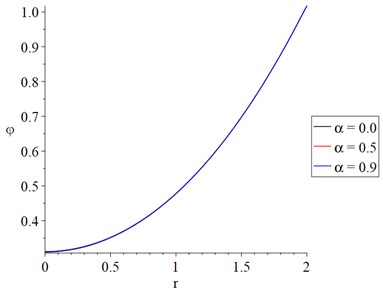 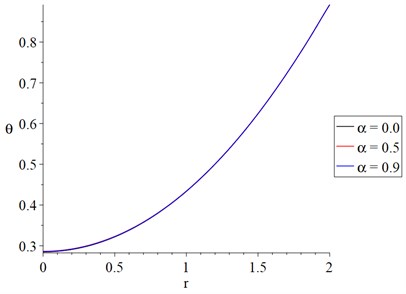 Fig. 5 shows that the fractional-order parameter has a significant effect on the displacement distributions, and this effect is visible near the impact of the thermal shock. The absolute values of the displacement at the edge of the cylinder take the following order: 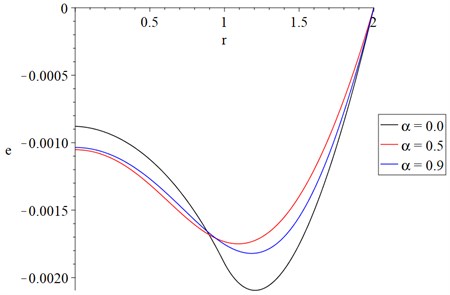 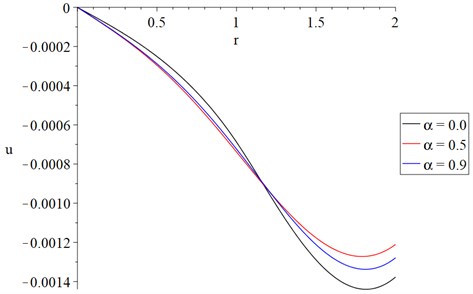 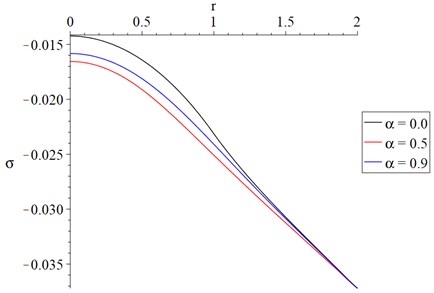 Fig. 7. The conductive temperature increment distribution with variance models and 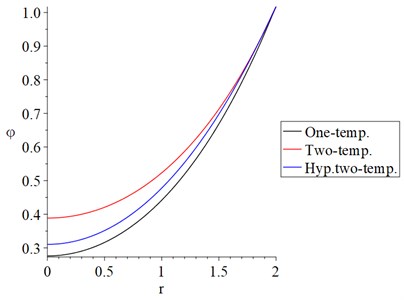 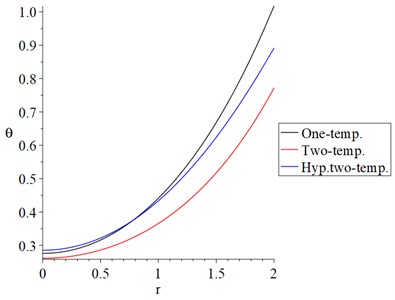 Fig. 11 shows that the average stress distributions in the context of the one-temperature and hyperbolic two-temperature models have a closed behavior, while its behavior based on the classical two-temperature model is different. The absolute values of the stress in the edge of the cylinder take the following order: 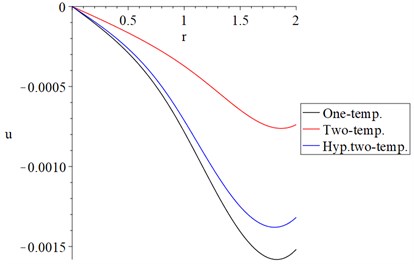 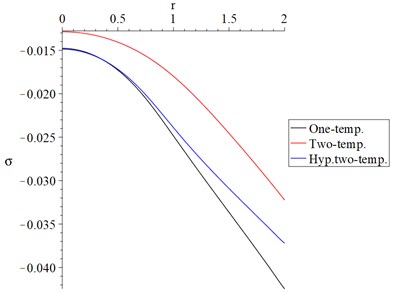 The issue of a thermoelastic homogeneous isotropic infinite cylindrical medium when the bounding surface is thermally shocked and no volume deformation is addressed in this article. One-temperature, classical two-temperature, and hyperbolic two-temperature models have also been used to solve the problem.

The fractional-order parameter has negligible impacts on conductive and dynamical temperature increments, but has a substantial influence on the strain, displacement, and average stresses, according to the numerical data.

As a result, the hyperbolic two-temperature thermoelasticity model is a good fit for describing the thermodynamic behavior of thermoelastic materials.