Copyright © 2021 Khaled Lotfy, et al. This is an open access article distributed under the Creative Commons Attribution License, which permits unrestricted use, distribution, and reproduction in any medium, provided the original work is properly cited.

The Penne’s bio-heat transfer equation can be used with normal mode technique to describe the characterizing of the temperature fluctuation in muscles. The analytical solutions of heating pattern is obtained in a closed-form when the propagation of ultrasonic waves in tissue system are taken into consideration. The impact of external electromagnetic field is used to investigate the influence of temporal and spatial distributions of temperature. The numerical simulations during the 2D and 3D graphs can be obtained for human tissue in simplified geometry in the context of the derived method. The normal mode analysis is used as a mathematical technique to solve the bioheat transfer equation analytically with some conditions to get the complete solution of the main variables in this model.

Increased in the present uses of technological devices and equipment such as computers, electrical appliances and home and led electric and magnetic fields emanating from these devices to the increasing environmental pollution mail which plays a major role in a rapid decrease in the intensity of the magnetic field of the Earth and human creatures adapted itself with the continuing decline in magnetic energy, but in turn lost a similar amount of capacity of vital functions within objects. The researchers proved that the decrease in the intensity of the Earth’s magnetic field associated damages arising from the impact of the electronic environment in which it operates to break down the cellular composition of the cells within the body, symptoms of feeling pain and roughness, arthritis, headaches and fatigue.

The magnetism is one of the fundamental forces, all of human civilization was born and lived her life under the magnetism arising from the Earth’s magnetic field, it is known that the space is filled with cosmic rays in the form of particles of nuclear high-power consists of the nuclei of atoms of elements light and heavy electrons moving at high speeds emitted from the sun, stars and galaxies across the universe. He explains that the cosmic rays are radiation serious are booked together in layers of the atmosphere under the affected spin in the belts , “Van Allen” radiation , which revolve in which ions high energy coming from space just between 4 thousand to 16 thousand kilometers from the Earth's surface and occur reservations for these rays thanks to the influence of the magnetic field of the planet, according to information monitored by the U.S. satellite “Explorer 1” in 1958, when he came with certain information about the this pouring barrage of deadly radiation surging in space cards awesome! If they hit us what carried us on this planet life. Were it not for the skies the atmosphere and the Earth’s magnetic perished all organisms on the planet.

On the other side, the magnetic positive impacts in our daily lives, and as the use of magnetic forces us due to the ancient civilizations.

Heat transfer in biological systems is relevant in many diagnostic and therapeutic applications that involve changes in temperature. For example, in hyperthermia the tissue temperature is elevated to 42–43°C using ultrasound by Seip and Ebbini [1]. Stoll [2] studied the thermal properties of skin to understand conditions leading to thermal damage (burns) to skin. Stoll [3] investigated the contacting case of skin with a hot objects. Diederich et al [4], studied the effect of electromagnetic fields and ultrasound waves for skin heating and deeper tissue.

Carslaw and Jaeger [5] and Lienhard [6] predicted the heat transport by analytical technique with the numerical methodology. Riu [7] studies the rise of temperature in the context of the bioheat transfer method which can be solved analytically and numerically by finite element technique for simple geometries Bowman and Martin [8], [9]. Davies [10] investigated a new models analytically during the temperature-dependent increases but this model is very difficult in perfusion, in this case the dependent of linear temperature can be used, on the other hand Martin [11] used a numerical simulations to describe the analytical model. Akrin [12] used the equation of bioheat transfer which it can be obtained in a wide range with many applications in bio-engineering to describe the blood heat transport during a perfuse tissues. Erdmann [13] investigated the finite element method to optimize the nonlinear form of the bioheat equation for optimizing regional hyper-thermia. The two-dimensional (2D) bio-thermal technique with the ultrasound applicators based on the bioheat equation can be solved by a finite difference equation, Yreus [14]. The finite difference methods at the boundary element have been used to solve the bioheat equation [15]-[19].

During the biological muscles (see Fig. 1), the temperature evaluation can be obtained in the context of the Penne’s bioheat equation, which is:

We consider rectangular coordinate system having origin on the surface 0 and -axis pointing vertically into the muscles. A magnetic field with constant intensity acts parallel to the bounding plane (table as the direction of the -axis (Fig. 2)). Due to the application of initial magnetic field , there are results of an induced magnetic field and an induced electric field . The simplified linear equations of electrodynamics of slowly moving medium for a homogeneous,

where is the partied velocity of the muscles, and the small effect of temperature gradient on is ignored. The dynamic displacement vector is actually measured from a steady state deformed position and the deformation is supposed to be small.

Fig. 1. Geometry of the problem

Fig. 2. The direction of magnetic field

The components of the magnetic intensity vector in the viscoelastic (blood in muscles) medium are:

The electric intensity vector is normal to both the magnetic intensity and the displacement vectors. Thus, it has the components:

The current density vector be parallel to , thus:

If we restrict our analysis to plane parallel to -plane with displacement vector (distance between cells in tissue) . Body couples and heat sources can be written in visco-elasticity tissue by following the equations given by Minagawa et al. [1981], Green Lindsay [1972] and Othman and Baljeet [2007] as:

The following dimensionless parameters were defined as:

where , , and is the tissue length.

Eqs. (13) and (14) take the following form (dropping the dashed for convenience):

The dimensional form of Eq. (1) can be obtained as:

The normal mode technique is used to solve Eq. (1) as:

where, is the wave number in the -direction, is a complex time constant, , , and are the amplitude of the functions , , and respectively.

Eliminating between Eqs. (22) and (24), we get the following fourth order ordinary differential equation satisfied by :

where , are the roots of the following characteristic equation:

In a similar manner, we get:

where are parameters depending on and .

The plane boundary subjects to an instantaneous normal point force and the boundary surface is isothermal, the boundary conditions at the vertical plan and in the beginning of the operation of acting magnetic field at are (Othman and Lotfy 2011):

Using Eqs. (13), (16), on the non-dimensional boundary conditions and using Eqs. (37), (38), (39), we obtain the expressions of displacements and temperature distribution for the body under the effect radiation of magnetic field as follows:

Invoking the boundary conditions Eqs. (37-39) at the surface of the plate, we obtain a system of three equations. After applying the inverse of matrix method, we have the values of the four constants , . Hence, we obtain the expressions of displacements, and temperature distribution for the muscles:

On the other hand, the parameter values of this problem are taken in dimensionless which can be given by = 1.0, 0.01, and the dimension of tissue is 3 cm. Fig. 3 displays the distribution of temperature at different three values of times against the distance. In this figure notice that the temperature distributions in tissue at the early stage of heating decreases with increasing the depth of tissue. The soft tissue can be considered as a viscous liquid for ultrasound propagation. The amount of heat which it is generated in the human tissue is more dependent on the tissue absorption coefficient. Acoustic absorption is due to the shear relaxation invariably cannot be accounted for by one relaxation time instead a distribution in continuous form of thermal memories must be used. In this case, this cause the relaxation process arises from the finite time taken for molecules to diffuse between adjacent shearing layers in the medium. Fig. 4 show the horizontal displacement distribution (distance between cells in the tissue) at different times as function of propagation distance. From this figure it can seen that the displacement distribution of tissue increases sharp in the start when the magnetic field acting on the tissue and hence smooth decreasing and converge to zero value (stable state) with the increase of the distance, after some time the displacement distribution more equilibrium this illustrated from the figure. 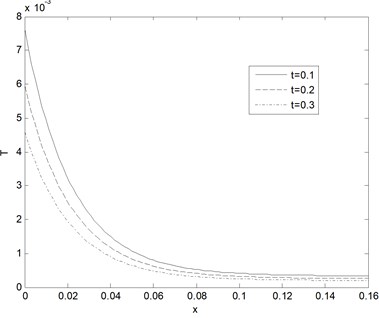 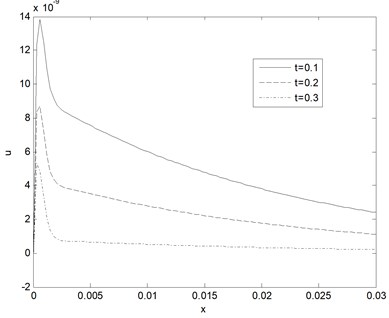 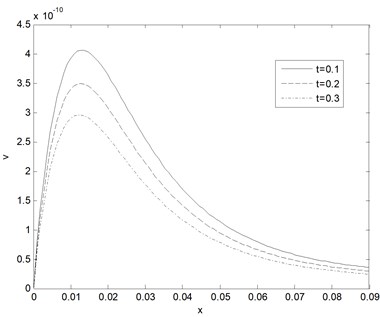 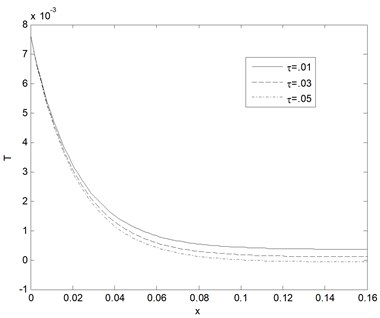 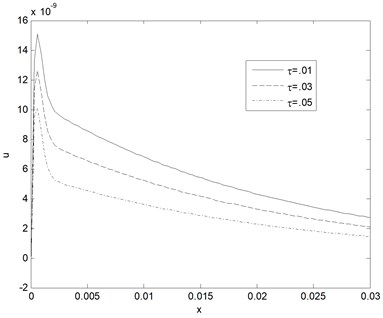 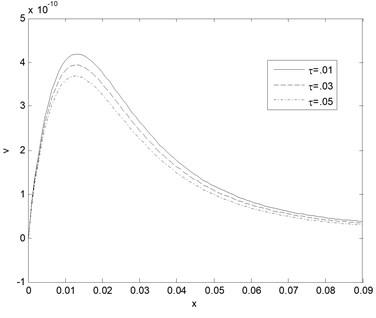 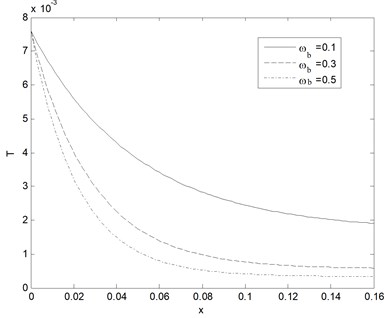 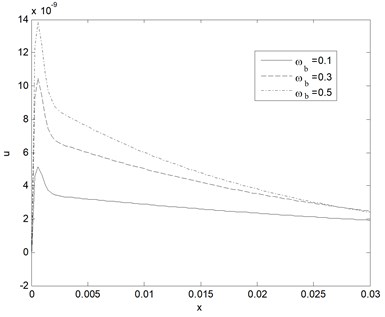 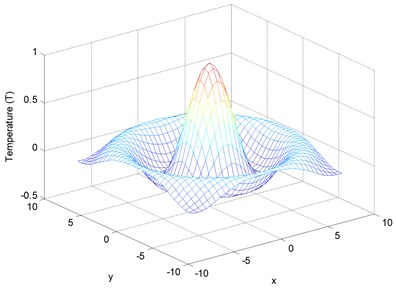 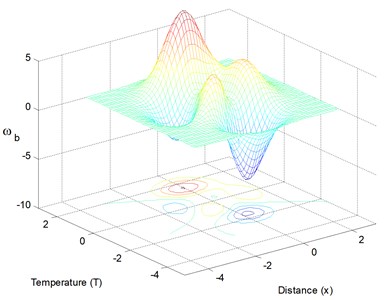 Effects of the individual’s physiological variables (such as blood perfusion, thermal conductivity and relaxation time) were investigated in detail. The present solution in this paper is very useful for a variety of bio-thermal studies. The curves in the context of the theories decrease or increase exponentially with increasing , this indicate that the thermoelastic waves are unattenuated and nondispersive, where purely thermoelastic waves undergo both attenuation and dispersion. The presence of magnetic field plays a significant role in all the physical quantities. Analytical solutions based upon normal mode analysis for themoelastic problem in solids have been developed and utilized. The value of all the physical quantities converges to zero with an increase in distance and all functions are continuous. The numerical results using normal mode analysis are in a good agreement with previously published data. Indeed, the most important factor is the extent to penetrate the magnetic field and the arrival of magnetic energy into the cells of the body in the areas sought to be accessed, and the duration of exposure to the magnetic field is very important, as the intensity of penetration of the field directly related to the mass of material magnetic-generating field and how to focus the magnetic field and treatment domain magnetic helps to get rid of pain in general also helps diabetics to lower blood sugar and cholesterol in the blood and reduce the swelling and works to calm the nervous system