Copyright © 2021 Adnan Jahangir, et al. This is an open access article distributed under the Creative Commons Attribution License, which permits unrestricted use, distribution, and reproduction in any medium, provided the original work is properly cited.

In this paper, estimation is made to investigate the influence of thermal loading due to laser pulse on elastic waves. The material through which the waves are propagating is homogeneous and isotropic in nature. Heat conduction through the media is analyzed by the model proposed by dual-phase-lag theory (DPL). The governing non-dimensional equations are solved by using the approximated harmonic solution. The expression for the field variables is obtained generally and represented graphically for a particular medium.

Very rapid thermal processes under the action of an ultra-short laser pulse are interesting from the standpoint of thermoelasticity because they require deformation fields and an analysis of the coupled temperature. This means that the laser pulse energy absorption results in a localized temperature increase, which causes thermal expansion and generates rapid movements in the structure elements, thus causing the rise in vibrations. These effects make materials susceptible to the diffusion of heat by conduction.

The ultra-short lasers are those with the pulse duration ranging from nanoseconds to femtoseconds. The high intensity, energy flux, and ultra-short duration laser beam have studied situations where very large thermal gradients or an ultra-high heating rate may exist on the boundaries, this in the case of ultra-short-pulsed laser heating [1, 2]. The microscopic two-step models that are parabolic and hyperbolic are useful for modifying the material as thin films. When a metal film is heated by a laser pulse, a thermoelastic wave is generated due to thermal expansion near the surface. The stress wave induced by pico and femtosecond laser pulses in a semi infinite metal by expressing the laser pulse energy as a Fourier series was studied by Wang and Xu [3]. The effect of rotation on a fiber-reinforced on the generalized magneto-thermoelasticity subject to thermal loading due to the laser pulse was studied by [4]. The effect of Thomson and initial stress in a thermo-porous elastic solid under G-N electromagnetic theory was discussed by [5]. The effect of the laser pulse on transient waves in a nonlocal thermoelastic medium under G-N theory was explained by [6].

A unified filed approach for heat conduction from macro to macro scales was investigated by [7]. A simplest thermoelasticity theory with microtemperatures that takes under consideration many new variables was presented by [8]. Quintanilla and Rache [9] pointed out a note on stability in dual-phase-lag heat conduction. The propagation of harmonic plane waves with assigned frequency by employing the thermoelasticity theory with DPL model was presented by [10]. The problems related with DPL model heat conduction model were considered by [11-13] and many others.

In this chapter we have considered a special type of heat source responsible of wave generation in thermoelastic medium. We have designed a thermoelastic medium model and the material is a homogeneous isotropic heated by laser pulse. To analyze the problem and get the numerical solutions for the temperature distribution, displacement function, stress components, normal mode analysis method is used. Finally, the theoretical results obtained are represented graphically for particular medium.

We have considering a generalized homogeneous isotropic thermoelastic medium with micro temperature and without any body-force while laser pulse is considered as the heat source. The rectangular Cartesian coordinates are used to represent the geometry of the half-space medium , with axis vertically into the medium. All the quantities in the problem will be in form of coordinates and and time as variable function.

The set of constitutive equations are:

where is heat input on laser pulse effects on heat equation and is representing, heat input in form of beam or laser-pulse [1]. We suppose that all functions are differentiable and continuous in the defined domain:

where is heat absorbed is pulse rise, is radius of beam, is depth of absorbing heat energy and with time variable. The system of governing equations can be represented as:

Introducing the following variables to dimensionless the governing system of equation:

where, is standard length and is the standard velocity given by . After non dimensional the governing equations can be represented as, (primes are dropped for simplicity):

Displacement and micro-temperature functions could be converted in terms of potential function by following expression [18]:

where, and are scalar potentials functions, and vector potential is representing by . After some algebraic calculations the above equations become:

2.1. Harmonic solution of the problem

Now let us consider that each field variable is propagating through the medium in terms of harmonic waves as:

For nontrivial solution the determinant of the above system of equations need to be zero, it implies:

Whereas, the roots of characteristic equation are , . The general solution of the problem is given by:

where are roots of the characteristic Eq. (23) and are some coefficients to be find:

Using the relation of potential functions we get:

The components of stress are:

The boundary conditions assumed at the surface to find the remaining unknown constants used in above exponential solution of the problem are,

1) Time dependent periodic force with magnitude is assumed to be acting normally on the medium, while tangentially the medium is considered as isolated from the surrounding:

where is an arbitrary constant function.

2) From condition on thermal boundary condition, the surface of half space is at some fixed temperature:

By applying the above obtained solutions in boundary conditions, we get:

To find the values of , , and we will apply matrix inversion method on system of equations:

Hence, we obtain the solution of each field variable.

The computations of figure (a) are carried out for different values of the time parameter to see the variations because of different time for laser pulse while 0.015 sec and 0.02 sec. In the figures (part-b) is representing the variations because of and and 0.1 sec. Graphical representation is made for low values for wave number 0.001 cycle/secon the plane 1. The non-dimensional field variables as, the temperature, displacement components, micro-temperature components, normal stress and tangential stress distribution functions are represented graphically for different values of time parameter

Fig. 1 depicts the behavior of heat propagating through the medium under different conditions of times. From part-a, it can be analyzed that the maximum value of the amplitude increases as the value of time increases. Part-b indicates the absolute value of the temperature gradient and heat fluxes are directly proportional to all the three-time lags. The curves converge to zero as the vertical distance from the surface increases indicating the waves to be surface waves in nature.

Fig. 1. against for different time 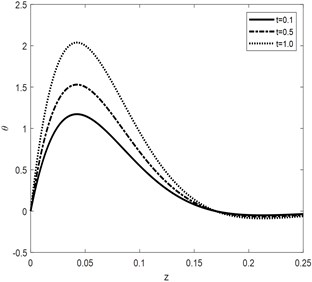 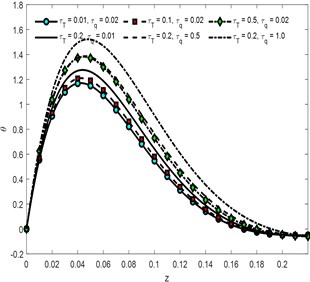 Fig. 2. against depth for different values of time 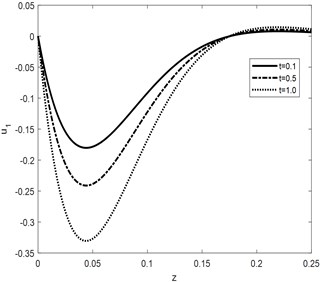 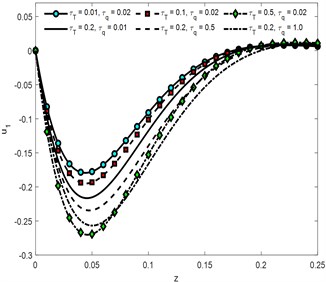 Fig. 3. against depth for different values of 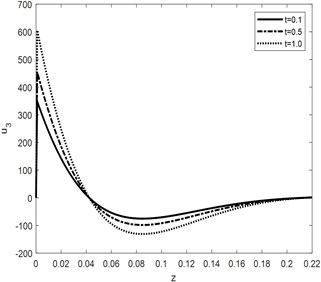 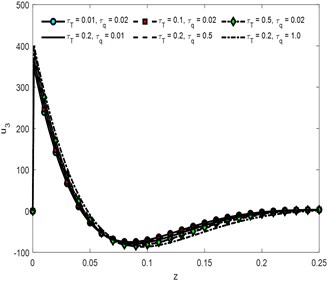 The curves for vertical components of displacement are responding to time parameter same as and the cases the curves for 0.1 converge to zero first. Phase lags and are having decreasing effect for some initial values of vertical distance but for depth > 0.075 the behavior reversed. Convergence of curve toward zero reduces as the times increases. Micro-temperature components against vertical component of distance are shown in Fig. 4 and Fig. 5. Time parameter is having increasing effect on absolute values of the amplitude of waves generated because of non-dimensional components of micro-temperature. It can be analyzed that the convergence rate of the curve is inversely proportional to the times. Greater the value of time lag higher the amplitude of the curve, it also reduces the convergence rate of the particle toward equilibrium. Similarly, the influence of is directly proportional to the amplitude of waves propagating through the medium. The curves in context of 0.02, 0.01 damped to zero faster than all the other conditions. Variation in Normal component of stress distribution function against time parameter is graphically represented in Fig. 6. Over all curves are having increasing effect of stress wave. The amplitude increases for and decreasing for the other values of vertical component of distance. The curves for 0.01 converge to zero earlier than the curves for higher value of time parameter. 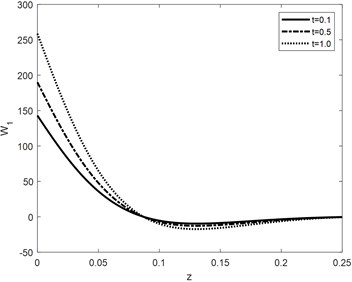 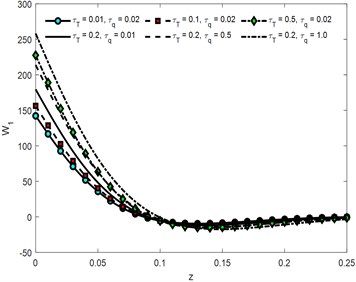 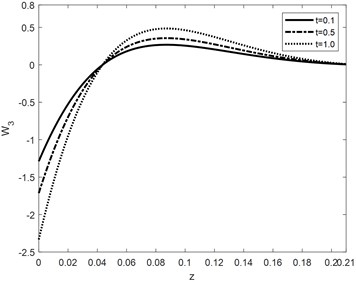 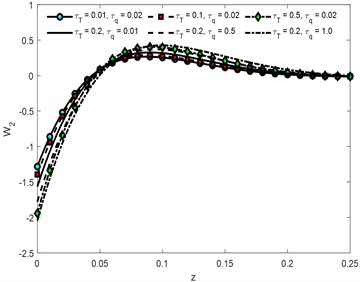 Propagation of shear stress along the material is presented in the Fig. 7. Just like all other field variables the tangential component of stress has the same response against time parameter of laser pulse. Influences of both the phase-lags and are directly proportional to the wave propagating through the medium. Highest amplitude is obtained for the value 0.2 and 1.0.

Fig. 6. Normal stress component against depth for different values of 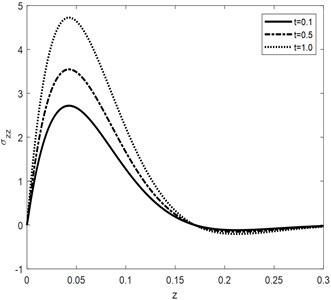 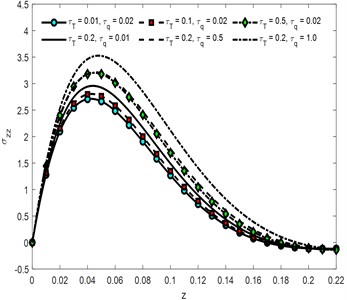 Fig. 7. Tangential stress component against depth for different values of 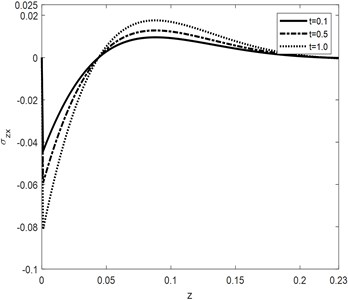 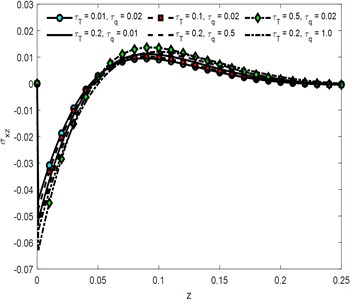 Following are some main points which could be concluded after considering the solutions of the problem:

1) Harmonic solution used in Eq. (16) to find the solution of field variables gives analysis of surface waves propagating in the medium. All curves obtained are having non-zero values only in a bounded domain along depth of medium i.e., outside this domain the effects of the waves vanish or converge to zero.

3) Time parameter is having decreasing effect on the factor responsible for damping of wave.

4) The phase-lags and are increasing the amplitude of each wave propagating through the medium and having decreasing effect on the damping factor.

5) Curves representing the amplitude of non-dimensional field variables are directly proportional to time parameter. Indicating that greater the value of time parameter, higher the amplitude of wave propagating through the medium. Signifying the fact that laser pulse is having increasing effect on plane wave generated in homogeneous thermoelastic medium in context of dual-phase-lag heat conduction model as in representation of [25, 26].