Copyright © 2021 Si Qin, et al. This is an open access article distributed under the Creative Commons Attribution License, which permits unrestricted use, distribution, and reproduction in any medium, provided the original work is properly cited. 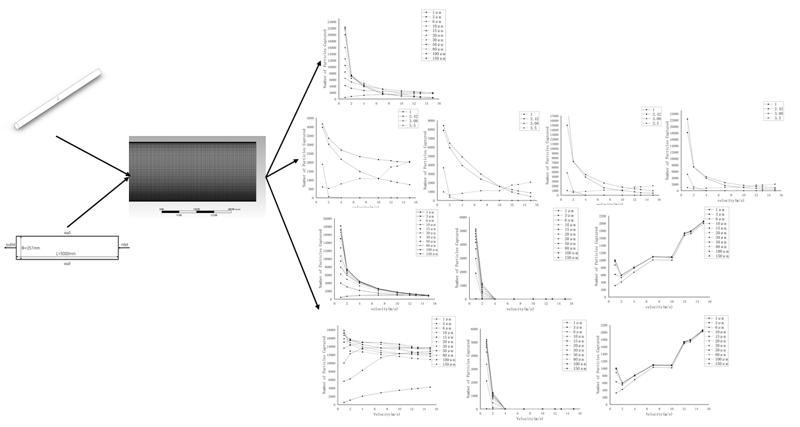 Pneumatic conveying refers to a conveying method of conveying particles or powders in a pipe by a gas (air or other gases) with pressure and initial velocity [1]. In addition to being used on large industrial assembly line equipment, this technology is increasingly being used in equipment dust removal systems to remove impurities from the system. Computational Fluid Dynamics provides a more convenient and efficient method for complex models [2]. At the same time, the results of simulation can represent the target data intuitively, which can save a lot of time for large engineering projects. The discrete particle model (DPM) is used to simulate the particle load flow with a volume fraction below 10 %-12 %. In this paper, the pipeline where the flow is fully developed in the pneumatic transportation is taken as the analysis object. In the analysis, the DPM was used to simulate the pipe, considering the gas-solid two-way coupling, and the deposition phenomenon of particles during transportation was analyzed.

The research object of this paper is a pneumatic conveying pipeline in a large-scale purging system, with a total length of 50 m and 8 inlets. The outer diameter of the pipeline is 273 mm, the inner diameter is 257 mm, and the wall thickness is 8mm. The pipe section with a length of 5 m at the fully developed section is taken for research. The fluid domain is shown in Fig. 1, and the plane schematic diagram of the fluid domain is shown in Fig. 2.

Import the fluid domain into the MESH module of ANSYS to divide the mesh, and the mesh type is Hexahedral. After grid independence verification and consideration of the number of incident particles, the mesh size was selected as 6mm. In order to calculate the fluid flow state at the boundary layer better, the wall mesh is refined, and the setting parameters of the boundary layer were shown in Table 1. After grid division, the number of cells is 12966156, and the number of nodes is 3200058. The mesh model is shown in Fig. 3. and Fig. 4.

Fig. 1. The model of fluid domain

Fig. 3. Mesh of inlet and outlet 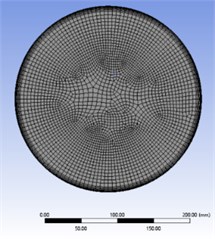 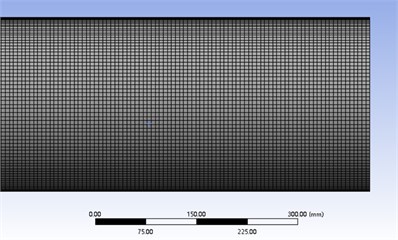 The research object of this paper is the gas-solid two-phase flow in a horizontal pipe with micron particles. Considering the particle diameter and mass flow rate is small, the following assumptions are made for the research process: (1) Taking silica particles ( as the research object, ignore the effects of other forces on the particles, and only consider the effects of gravity and lift [3]; (2) The gas phase in the pipeline is Newtonian fluid, and the two phases of gas and solid are continuous in flow and coexist in space; (3) Ignoring the velocity difference between the gas phase and the solid phase; (4) The diameter of the particles are equal within the same inlet jet.

Boundary condition settings: (1) Inlet boundary: In the simulation, the velocity inlet is used as the boundary condition. Specification Method: Intensity and Hydraulic Diameter. (2) Outlet boundary: Outlet boundary use outflow, the normal gradient of any physical quantity at the exit of the flow field along the exit surface is zero. (3) Wall boundary: The pipe wall adopts wall boundary, which means that the airflow velocity at this wall is always zero. (4) Calculation model: The turbulence - model includes Standard - model, RNG - model and Realizable - model [4]. This paper adopts the RNG - turbulence model. The DPM model is selected as the two-phase coupling, and particles of the same diameter are injected through the inlet surface. The random walk model is selected as the turbulent diffusion model [5]. Select Reflect model at the inlet, and the particles bounce back to the calculation domain without energy loss after collision; select Escaped model for the outlet, and the particle will leave the calculation domain once it reaches this point and no longer be calculated; Trap model is selected on the pipe wall, particles will adhere to the wall immediately after collision and will not enter the fluid domain for calculation.

3.2. The effect of gas flow rate on particle transport characteristics

Fig. 5. The relationship between the number of particles of different sizes captured on the wall and the flow velocity under the action of gravity 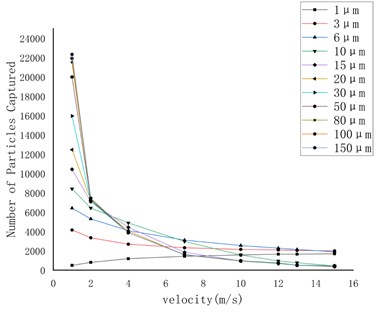 Different particle shapes are plotted in the same chart, as shown in Fig. 6. Since there are too many working conditions to analyze one by one, the particles with diameters of 3, 10, 50 and 150 (unit: μm) that are only affected by gravity are selected as the research objects.

By comparing the figures, it can be found that particles with different diameters all show the same motion characteristics under the four shapes: with the increase of the flow rate, the number of the spherical (smooth, rough) particles caught on the wall decreases gradually, and the particle deposition phenomenon decreases gradually, and finally stabilizes around a certain value. The number of captured elliptical particles on the wall shows a good downward trend when the gas flow rate is very small. When the flow rate reaches 4 m/s, it can be considered that the particles are no longer captured and the particles are no longer deposited. The number of captured irregular particles on the wall decreases first and then increases with the increase of the flow velocity.

Fig. 6. The relationship between the number of particles captured on the wall and the flow velocity under different shape factors 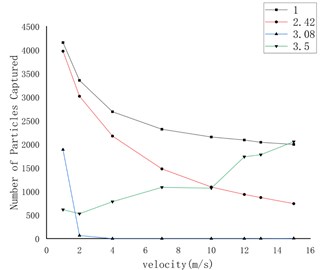 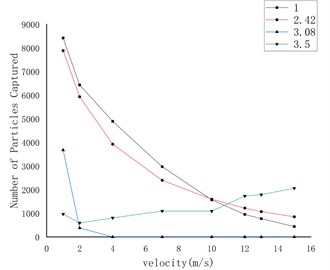 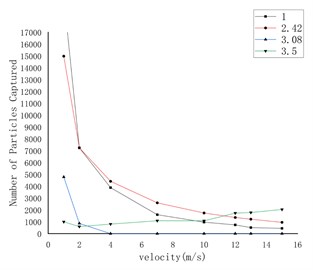 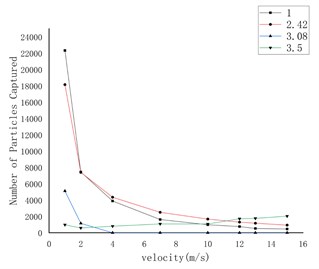 Fig. 7. The relationship between the number of particles captured on the wall and the flow velocity under gravity and lift force

Fig. 8. Capture data of different shapes of particles with or without lifting force on the wall 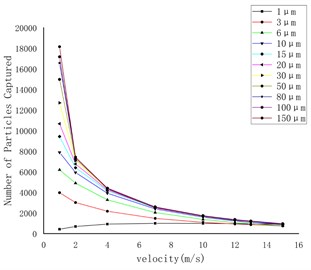 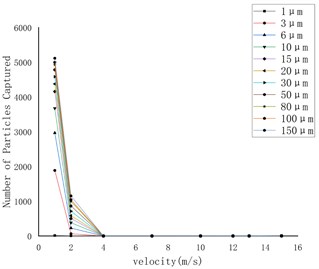 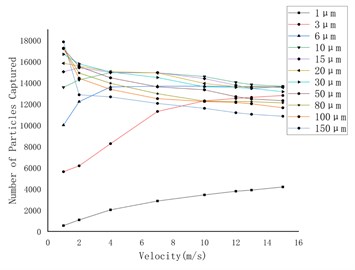 According to the result of the analysis, there are four conclusions as follows:

1) In this paper, the motion law of pneumatic conveying of micron particles in horizontal pipe is determined, which provides a theoretical basis for determining the optimal conveying speed.

2) Particles of different shapes have the same law of motion under different particle diameters, and the amount of particles deposited only changes in a small range.

3) Lift has a greater impact on the deposition of spherical particles (smooth, rough), and has less impact on elliptical and irregular-shaped particles.

4) Lift force is an important factor in the process of pneumatic conveying of micron particles.