Copyright © 2021 Dongdi Liu, et al. This is an open access article distributed under the Creative Commons Attribution License, which permits unrestricted use, distribution, and reproduction in any medium, provided the original work is properly cited.

In this paper, the numerical simulation method of computational fluid dynamics (CFD) is used to establish the flow field model of elbow, including the determination of the applicable gas-solid two-phase flow model and the establishment of the actual basic fluid dynamics equations. After meshing the elbow with ICEM software, the effects of air velocity, bend diameter ratio and other factors on the flow characteristics of the elbow pneumatic conveying are simulated based on FLUENT software. The results show that in the pneumatic conveying with vertical elbows, the flow characteristics of gas-solid two-phase flow have obvious differences with the changes of many factors. 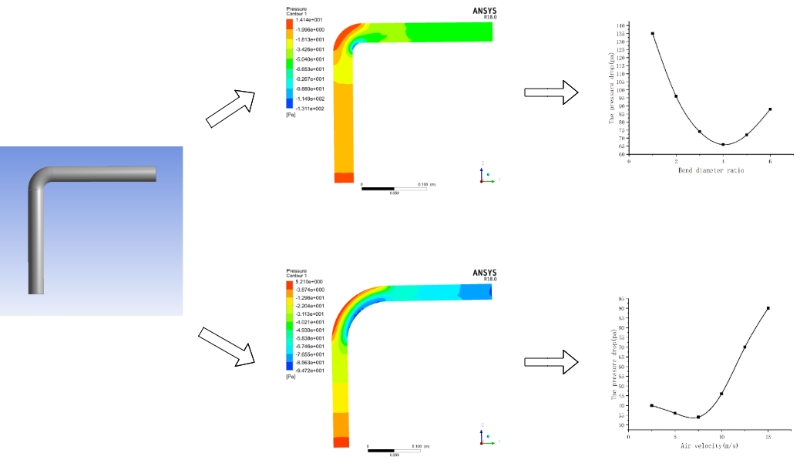 Elbow is one of the typical components in pneumatic conveying system, which has a significant impact on the flow characteristics of gas-solid two-phase flow in conveying pipeline, such as pressure drop, pipe wall wear and material crushing [1]. The flow state of material particles passing through the elbow is very complex. The collision between particles and between particles and pipe wall is easy to form secondary flow, resulting in large pressure drop and energy loss [2]. Therefore, the study of the flow characteristics of two-phase flow in elbow is of great significance to the design and production optimization and the improvement of pneumatic conveying system [3].

In this paper, the gas-solid two-phase flow model of vertical elbow is established by using the numerical simulation method based on computational fluid dynamics (CFD). During the pneumatic conveying process of the vertical elbow, the influence of the bending diameter ratio and air flow velocity on the pressure distribution of the elbow pipe and the flow velocity distribution of solid particles are analyzed. After using ICEM software to generate the model mesh, use FLUENT software to perform 3D finite element analysis.

For the gas-solid two-phase flow model containing both air and particles, considering the small particle size studied in this paper, the simulation method of Euler two fluid model is used to analyze, that is, both air and particles are regarded as continuous medium. The gas and solid phases follow their own continuity equation and momentum equation respectively, and they are coupled by interaction force [4].

where: is the volume fraction of each item; is the density; is the velocity vector;  is the stress tensor;  is the gas phase pressure;  is the interaction force between gas and solid;  is the acceleration of gravity:

where:  is the drag coefficient of gas-solid phase, and the drag model proposed by Gidaspow is adopted.

The turbulence model adopts Realizable - model. Compared with the Standard - model, the turbulent viscosity value is related to rotation and curvature, and the term in the dissipation rate equation is modified [5]:

The constants in the equation use default values.

During the pneumatic transportation of vertical bends, the pipes at the inlet section are vertical straight pipes and the pipes at the outlet section are horizontal straight pipes. The geometric model of vertical bends is established by using the three-dimensional software of ANSYS. As shown in Fig. 1, the inner diameter d of the pipe is 30 mm, in which the vertical pipe length L1 is 200 mm, the horizontal pipe length L2 is 200 mm, the bending radius is 30 mm and the bending diameter ratio / is 1. Then, the watershed is meshed by ICEM, Tetrahedral structured grid division is adopted, and the grid is densified near the wall. The number of dividing nodes is 37611 and the number of elements is 106168. The finite element model of elbow is obtained, as shown in Fig. 2.

1. Both gas phase and solid phase are continuous incompressible fluids.

2. There is no temperature difference in the flow field and the temperature remains stable.

3. Ignore the collision between particles.

4. The flow in the pipe is regarded as a fully developed turbulent flow.

5. The solid particles are equal in size and are smooth ideal spheres.

6. Only the drag force and gravity caused by the gas-solid velocity difference are considered. 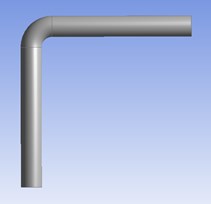 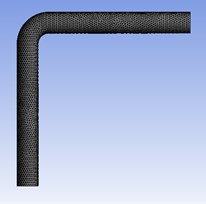 In this paper, air at room temperature is used as gas phase and main phase, and solid particles are used as secondary phase. Air enters from the inlet of the vertical section of the elbow and flows out from the outlet of the horizontal section. The simulation model uses the Euler method, which is a two-fluid model, to simulate the flow characteristics of the elbow. Because the convergence of first-order discretization is better than that of second-order discretization, the first order upwind scheme is selected as the discretization scheme of turbulence equation [6]. For the pressure velocity coupling, the Simple algorithm is adopted, the residual accuracy is 10-5, 500 iterations, and the results converge.

The physical properties of air and particulate materials are shown in Table 1.

The boundary conditions are as follows: 1) Particles are evenly distributed at the inlet, which is the same as the gas velocity; 2) The outlet is set as free flow; 3) Adopt no slip wall; 4) The pressure, momentum, turbulent kinetic energy and turbulent dissipation in the relaxation factor are set to 0.3, 0.7, 0.8 and 0.8 respectively, and the rest remain the default; 5) Acceleration of gravity is 9.81 (m/s2); 6) Steady state calculation.

4. Results and analysis of simulation

4.1. Distribution of pressure and speed throughout bend

Fig. 3 shows the distribution of pressure and solid velocity in the whole elbow by simulating pneumatic conveying with gas phase velocity of 15 m/s, bend diameter ratio / of 3 and consistent other conditions. 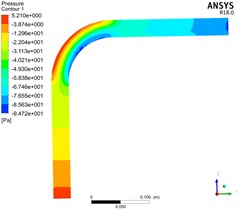 Fig. 4 shows the distribution of pressure in the whole elbow by simulating pneumatic conveying with gas phase velocity of 10 m/s, bend diameter ratio / of 1, 3, 5 and consistent other conditions. 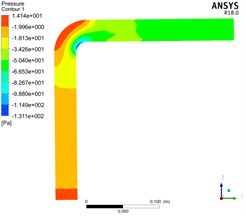 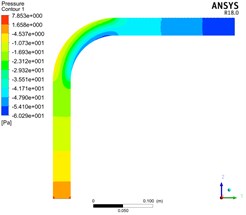 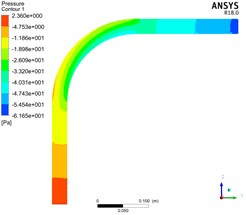 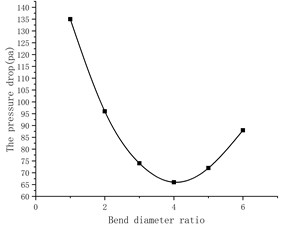 The relationship between the pressure drop of the elbow and the bend diameter ratio is showed in Fig. 5.

Fig. 6 shows the distribution of solid velocity in the whole elbow by simulating pneumatic conveying with gas phase velocity of 15 m/s, bend diameter ratio / of 1, 3, 5 and consistent other conditions. 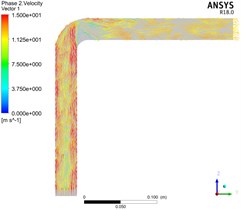 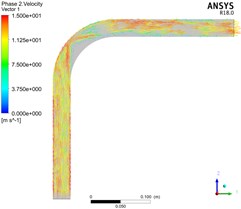 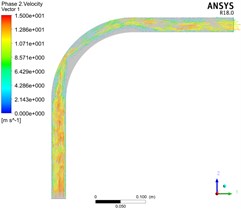 Fig. 7 shows the distribution of pressure in the whole elbow by simulating pneumatic conveying with gas phase velocity of 5 m/s, 10 m/s, 15 m/s, bend diameter ratio / of 3 and consistent other conditions.

According to Fig. 8, the minimum pressure drop air velocity of this model can be 5-10 m/s. 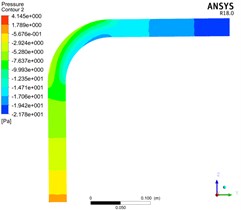 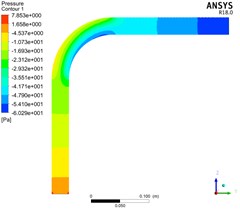 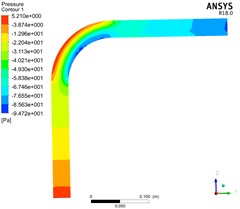 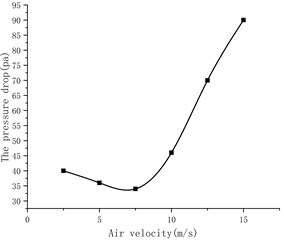