Copyright © 2021 Zhipeng Li, et al. This is an open access article distributed under the Creative Commons Attribution License, which permits unrestricted use, distribution, and reproduction in any medium, provided the original work is properly cited. 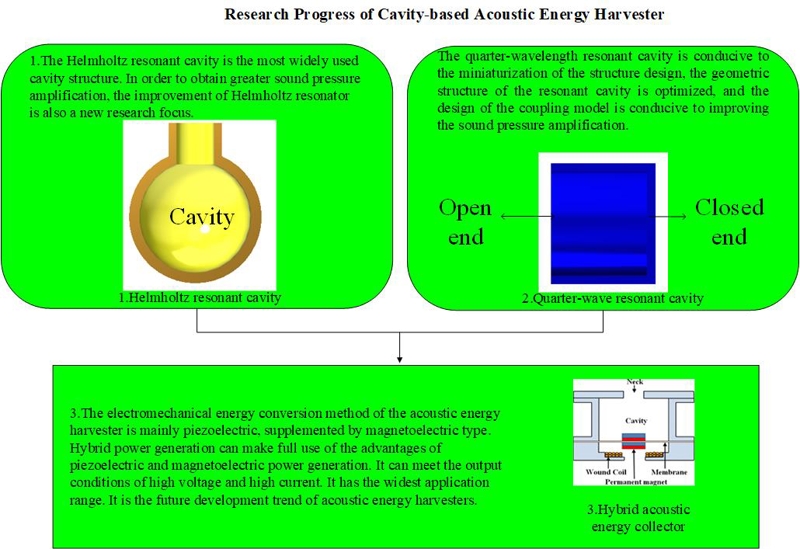 The development and use of new energy, especially renewable energy, has become the principle of energy construction and development in various countries, and the research on environmental energy harvesters is a major research hotspot [1].

The acoustic energy collector uses the cavity acoustic mode to capture the acoustic signal in a certain frequency range at the mouth of the cavity, achieves fluid-solid coupling and amplifies the acoustic vibration excitation, and then through piezoelectric, magnetoelectric and friction power generation mechanisms, the acoustic energy is finally converted into electrical energy. In the fields of aerospace, weapon equipment, marine engineering, etc., cavity structures exist widely [2]. When the high-speed jet passes through the cavity, vortex-induced vibration will occur in the cavity, forming a feedback growth loop, which will cause the energy to be continuously converted into the sound field, if the sound field energy is collected, the damage caused by the sound radiation to the mechanical structure can be effectively reduced, at the same time, energy waste can be avoided, so the research of acoustic energy harvester has important academic value and engineering application background. For example, in terms of engineering applications, the research of acoustic energy harvesters can effectively reduce the damage of the cavity near-field acoustic radiation to the electronic instruments and meters in the weapon compartment.

The generation of airflow-induced sound is closely related to the phenomenon of vortex-induced vibration, and vortex-induced vibration is mainly affected by the geometry of the resonant cavity and the incoming flow parameters [3], so the resonant cavity is the key to the design of acoustic energy harvesters. At present, mainstream resonators include Helmholtz resonators, quarter-wavelength resonators and half-wavelength resonators, which can be divided into deep cavities and shallow cavities according to the depth of the cavity in the resonator [4]. 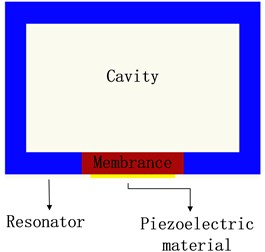 Since 1950, the United States and Russia have begun to conduct research on cavity-based energy harvesters [8]. For example, in 1960, Harry Diamond et al. in the United States invented the airflow resonance generator [9], also known as a jet generator, and it was applied in the military field as a fuze power supply.

The phenomenon of sound caused by airflow in a cavity is a very complex dynamic system, and there are many explanations for the generation of sound sources. The current research on the internal and external description, excitation and control mechanism of aerodynamic sound sources is still in the exploratory stage. However, it is generally believed that the generation of sound sources in the cavity mainly includes the following four links, forming a closed-loop system, as shown in Fig. 2. When the high-speed jet passes through the static fluid medium, the boundary of the jet and the static medium will continuously generate vortices. The vortex follows the jet and encounters sharp objects, which stimulates more vortices and produces sound at the same time. When the acoustic signal propagates to the bottom of the resonant cavity, it is reflected. At this time, the acoustic signal is fed back to the flow field, and at the same time has an effect on the vortex shedding to adjust the new vortex frequency to be consistent with the acoustic mode frequency. Due to the resonance phenomenon, the induction and radiation of the sound source in the cavity are further amplified.

Fig. 2. The process of acoustic generation in a cavity 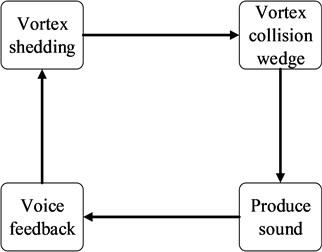 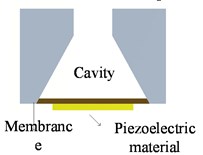 The acoustic energy collector uses the cavity acoustic mode to capture the acoustic signal in a certain frequency range at the mouth of the cavity, achieves fluid-solid coupling and amplifies the acoustic vibration excitation, and then through piezoelectric, magnetoelectric and friction power generation mechanisms, the acoustic energy is finally converted into electrical energy. The following first analyzes the relevant theories of different transduction effects, and then analyzes some classic structures and cases. 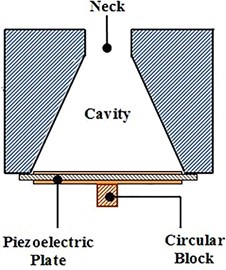 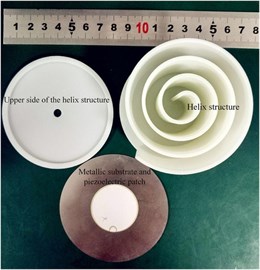 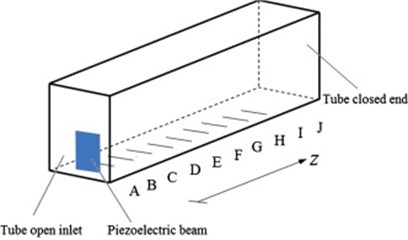 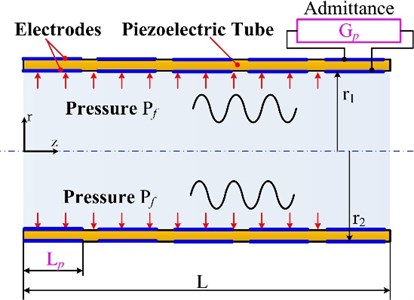 Magnetoelectric energy conversion technology is the relative movement of the magnet and the coil, which causes the change of the magnetic flux of the coil, and then generates the induced electromotive force. It has the characteristics of high output current and low cost, but the structure is generally more complicated than piezoelectric energy conversion. A typical electromagnetic acoustic energy collector has the same membrane as a piezoelectric acoustic energy collector [34]. The vibration of the membrane drives the magnet or coil to vibrate, causing changes in the magnetic flux in the closed coil, and then generating induced electromotive force, as shown in Fig. 10. 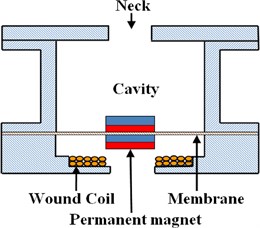 Compared with piezoelectric energy harvesting, the output current of magnetoelectric energy harvesting is larger, but the output voltage is generally lower, which is suitable for working conditions of high current and low voltage. The most representative one is the fuze jet generator designed by Harry Diamond et al. in 1960 [35], which has been successfully used as a fuze power source for M433, M443, M444 electronic time fuzes and multi-purpose rocket fuzes. The jet column electromagnetic energy collector designed by Wang et al. [36], as shown in Fig. 11, uses the periodic oscillation of the pressure inside the cavity when the fluid passes through the cavity to cause the permanent magnet to vibrate up and down to generate electricity. The experiment measured that when the load is 25 Ω, the cavity pressure oscillation amplitude is 254 Pa, and the vibration frequency is 30 Hz, the maximum output power is 0.4 μW. Based on the literature [25] [26], Izhar et al. developed an electromagnetic acoustic energy harvester with a cone-shaped Helmholtz cavity [37], as shown in Fig. 12. The collector has two winding coils, one is a cylindrical type surrounded by a magnet, and the other is a disc type under the magnet to maximize power output. The experimental results show that the collector can produce resonance phenomenon at 330.3 Hz and 1332 Hz, in which 330.3 Hz is the resonance between sound wave and membrane with magnet, and 1332 Hz is the resonance between sound wave and Helmholtz resonator, and the resonance frequency is 330.3 Hz, the sound pressure is 100 dB, the measured maximum output power is 212 μW. In order to improve the reliability of the structure, Khan et al. improved the literature [37], fixed the magnet, while the coil can move, designed a fixed magnet electromagnetic sound energy collector [38], and used a larger permanent magnet. The experimental results show that when the sound pressure is 100 dB and the best load is 50 Ω, the measured maximum output power is 789.65 μW. Lai et al. designed a miniature electromagnetic sound energy collector [39], as shown in Fig. 13. The energy conversion structure consists of a nickel planar coil and a neodymium magnet attached to a suspension plate. Through thermal evaporation, photolithography, electrodeposition and wet etching processes, a planar coil and a double-sided thermal oxide silicon wafer are fabricated on a 500 µm thick double-sided thermal oxide wafer suspension plat. The equipment size is only 3 mm×3 mm×1 mm. The experimental results show that when the distance between the loudspeaker and the miniature sound energy harvester is 5 mm, the system resonates, the resonance frequency is 470 Hz, and the output voltage is 0.24 mV. 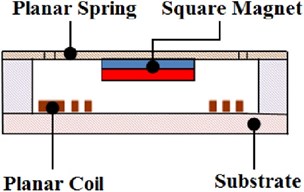 Triboelectric nanopower generation is two materials with different binding abilities to electrons. When they come into contact with each other, electrons are gained or lost, and current is generated in an external circuit, which converts mechanical energy into electrical energy. For example, Yang et al. first developed a triboelectric acoustic energy harvester using Helmholtz resonators [40], its power generation materials are made of polytetrafluoroethylene film and porous aluminum film electrodes. The experimental results show that at 70-110 dB, the maximum electric power density of the collector is 60.2 mW/m2, which can directly light up 17 light-emitting diodes. Moreover, it was found in the experiment that the collector can also be used as a self-powered acoustic sensor for sound source localization. Martin Olsen et al. developed a nano-friction piezoelectric generator [41]. A piezoelectric film is placed in the wind tunnel. Under the action of the wind, the piezoelectric film vibrates between the two copper electrodes. It is measured through experiments that the electric energy generated when the wind speed is 1.6 (m·s-1) is enough to light up an LED light, and found that as the wind speed increases from 0-8 (m·s-1), the vibration frequency also linearly increases. Cui et al. designed a mesh structure friction nano-acoustic energy collector [42], as shown in Fig. 14. It has two bases and a vibrating membrane. The upper substrate of stainless steel mesh and PVDF nanofiber is the upper electrode, and the lower substrate of aluminum mesh material is the lower electrode. The experimental results show that the mesh structure is conducive to air circulation and the propagation of sound waves. The incident sound waves make the vibrating membrane oscillate between the aluminum and PVDF nanofibers and repeat contact and separation to generate electric current. It is measured that the acoustic energy collector can work stably in a bandwidth of 50-425 Hz, the maximum charging rate is 61 μc/s, and the maximum power density is 202 mW/m3. Continuous working for 7 days, 100 million cycles of vibration, the power generation signal is not attenuated. 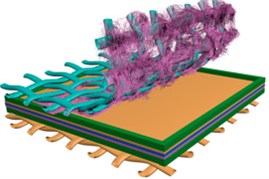 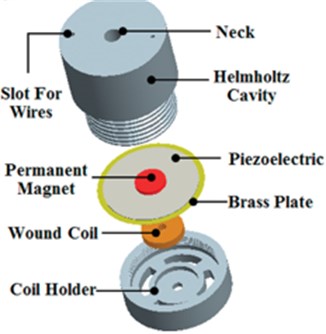 Summarize and compare Table 1 and analyze the output characteristics of piezoelectric and magneto-electric acoustic energy collectors, such as structure size, output voltage, output current and other parameters, as shown in Table 2.

The collection of environmental energy has received more and more attention, and sound energy is the most extensive energy in the environment. The collection technology and application research of sound energy have become a research hotspot at present. The design of the cavity structure is particularly critical in acoustic energy collection. The Helmholtz resonant cavity is the most widely used cavity structure. In order to obtain greater sound pressure amplification, the improvement of Helmholtz resonator is also a new research focus. The quarter-wavelength resonant cavity is conducive to the miniaturization of the structure design, the geometric structure of the resonant cavity is optimized, and the design of the coupling model is conducive to improving the sound pressure amplification. The electromechanical energy conversion method of the acoustic energy harvester is mainly piezoelectric, supplemented by magnetoelectric type. With the emergence of new technologies and new materials, friction power generation and acoustic crystal resonance power generation have become a new research direction. Hybrid power generation can make full use of the advantages of piezoelectric and magnetoelectric power generation. It can meet the output conditions of high voltage and high current. It has the widest application range. It is the future development trend of acoustic energy harvesters. However, the miniaturization of the structure is a difficult point.