Copyright © 2022 Yaochen Zheng, et al. This is an open access article distributed under the Creative Commons Attribution License, which permits unrestricted use, distribution, and reproduction in any medium, provided the original work is properly cited.

Squeak and Rattle problems seriously affect the quality of the vehicles. In the adjustment stage of the automobile development process, engineers mainly rely on subjective evaluation to diagnose squeak and rattle noises, which is prone to misjudgment, missed judgment and time-consuming problems. There are gaps in relevant objective evaluation methods. This article proposed that speaker identification is used to identify squeak and rattle noises from the audio recorded in the test, to achieve objective and accurate results. In this paper, four kinds of squeak and rattle noise audios are used as samples, Mel Frequency Cepstrum Coefficient is extracted as feature vector to construct target Gaussian mixture models (GMM). The expectation, variance and correlation coefficient of the Gaussian mixture model can be calculated to describe the difference of multiple squeak and rattle noises. Using samples to judge accuracy rate, the results indicated that the acceptance accuracy rate reaches 100 %, and the rejection accuracy rate reaches more than 95 %.

Squeak and Rattle (S&R) is mainly divided into two categories: Rattle and Squeak. The reason for the abnormal knocking noise is that the gap between adjacent parts is insufficient, which is smaller than the normal relative displacement response under environmental excitation, so that the contact generates impulse force. The reason for the abnormal friction noise is that the parts in contact with each other produce tangential relative displacement under environmental excitation. Abnormal percussive sound and frictional S&R can be regarded as a secondary excitation under the primary excitation of the environment, and the side effects of S&R form high-frequency vibration to produce sound, and then it is transmitted through the surrounding related structures.

The S&R utterance is analogous to the speaker’s speaking. Both are stimulated at the source of the sound, and the sound is transmitted through other structures. The method of speaker identification is to extract features from the vocal tract of different speakers, which are used to characterize the differences of different speakers, without looking for the source of the sound, which is the feature of the vocal cords. There are often similar sound transmission structures around the same kind of S&R, so you can consider using speaker identification methods for S&R recognition.

Mel Frequency Cepstrum Coefficient (MFCC), as an effective signal feature, has excellent characterization capabilities, and is widely used in the field of natural speech processing [1-5]. The Gaussian Mixture Mode (GMM) is a probability density function obtained by the weighted average of multiple high-dimensional Gaussian distributions [6]. Get the GMM corresponding to the S&R. In this article, for typical car knocking abnormal noise signals, including seat headrest guide rod knocking S&R, seat belt retractor knocking S&R, seat leather friction S&R and door panel friction S&R, try to use Speaker recognition model including MFCC and GMM, based on likelihood function for S&R recognition.

The formula for DCT is as follows:

The DCT calculation is equivalent to the real Cepstrum calculation, and the outputs are used to describe the spectral envelope, which is the characteristics of the sound transmission structure.

The common MFCC dimension is 5~15 [8], consider and add the logarithmic energy of the corresponding frame on the basis of the original MFCC, which is convenient for clustering in the subsequent algorithm, and adds the first-order difference and the second-order difference to reflect its dynamic characteristics form the final dimensional feature vector to improve the recognition performance.

For the problem of using sample sets to construct an unknown probability distribution, GMM [9] is a common method to solve the problem. GMM is essentially a multi-dimensional probability density function, which is a weighted combination of multiple multi-dimensional Gaussian distribution probability density functions. After determining the initial GMM, after Expectation-Maximization (EM) algorithm training, the GMM parameter set that maximizes the likelihood function of the sample set can be obtained.

The probability density function of M-order GMM is as follows:

Assuming that the sample set is the likelihood function of GMM [10, 11] with respect to the parameter set can be expressed as:

In the recognition stage, the feature vector set of the test sound signal is, and the corresponding likelihood function score is calculated on the target GMM model. The formula is as follows:

The calculated likelihood function score is compared with the preset likelihood threshold. If it is greater than the threshold, the test sound signal is accepted as the target sound signal, otherwise the signal will be rejected.

The GMM recognition flow chart of S&R in this article is shown in Fig. 1.

In this paper, four kinds of S&R are collected, namely the knocking sound of the seat headrest guide rod, the knocking sound of the seat belt retractor, the friction sound of the seat leather and the friction sound of the door panel, the vibration test is shown in Fig. 2 [12]. The experimental object is fixed on the vibration table, and the electromagnetic exciter is used for excitation. The load is the road surface excitation spectrum collected on the actual vehicle, and the experimental environment is a semi-anechoic environment. B&K equipment is used to record audio data, the sampling rate is 48 kHz, each sampling time is 5 s, and the audio is saved in wav format. Because there is a certain amount of background noise when the test bench is working, high-pass filtering is used for preprocessing.

3.3. The influence of eigenvector dimension and GMM order on recognition rate

It can be seen from the results in Table 2 that when the feature vector dimension is 39 and the GMM order is 36, the recognition rate reaches the maximum 100 %. Therefore, 70 Mel filters, 12 DCT output coefficients, 39-dimensional feature vectors and 36-order GMM are selected for subsequent experiments.

Figs. 3-8 shows the mathematical characteristics of the S&R GMM of the seat headrest guide rod.

It can be seen that there are differences in the mathematical characteristics of the four different GMMs. The low-dimensional performance of expectations, variance and correlation coefficients is obvious in Figs. 3-8. The correlation coefficient diagrams in Figs. 5 to 8 show that there is a certain correlation between the dimensions, with a positive correlation as a whole, and a negative correlation between some dimensions. The difference between the four kinds of abnormal noise GMM is manifested as the difference in likelihood function in the recognition process, which affects the recognition result. It should be noted that GMM is weighted by multiple high-dimensional joint normal distributions, so GMM is a high-dimensional multimodal probability density function. The expectation belongs to the first-order feature of the probability density function, and the variance and correlation coefficient belong to the second-order feature of the probability density function, and cannot fully characterize GMM. 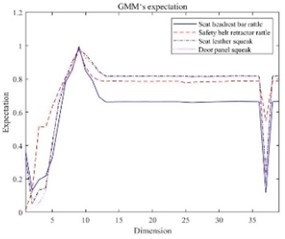 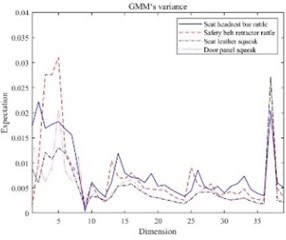 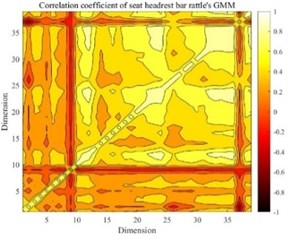 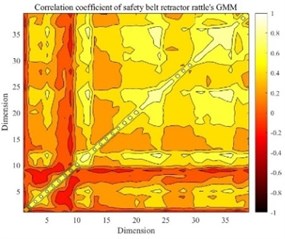 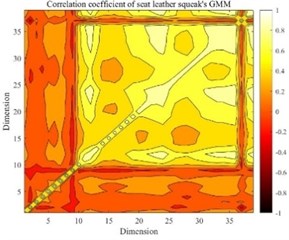 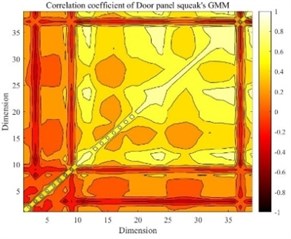 It can be seen from Table 3 that when the test is the audio with the same S&R as the target GMM, the acceptance accuracy rate reaches 100 %, and when the test is the audio with the S&R different from the target GMM, the rejection accuracy rate of the 4 kinds of S&R GMM reaches above 95. The experimental research results show that the speaker recognition algorithm can be applied to the field of S&R recognition, and the accuracy rate of acceptance and rejection has a high level.

It can be seen from Table 3 that when the test is the audio with the same S&R as the target GMM, the acceptance accuracy rate reaches 100 %, and when the test is the audio with the S&R different from the target GMM, the rejection accuracy rate of the 4 kinds of S&R GMM reaches above 95. The experimental research results show that the speaker recognition algorithm can be applied to the field of S&R recognition, and the accuracy rate of acceptance and rejection has a high level.

This article attempts to use the speaker identification method to identify abnormal noises, and extract the S&R of seat headrest guide rod knocking, seat belt retractor knocking S&R, seat leather friction S&R, and door panel friction S&R. The MFCC of the 4 sample audios is used as the feature to describe the S&R, and the GMM of each of the 4 S&Rs is constructed. Calculate the likelihood function of the test audio on the 4 kinds of S&R GMM to determine whether it belongs to the target S&R. Through the experiment, the following conclusions are obtained:

3) When recognizing the test audio, the 4 kinds of S&R GMM can accurately identify the same kind of S&R audio, and the rejection accuracy rate of the different S&R audio is above 95 %.