Copyright © 2021 Boris Gordeev, et al. This is an open access article distributed under the Creative Commons Attribution License, which permits unrestricted use, distribution, and reproduction in any medium, provided the original work is properly cited.

A vibration-based diagnostics method of large-power 1JAH5 (Siemens) DC motors over 660 kW used in paper machines is proposed in the article. When studying vibration spectrograms it was found that 8 Hz frequency shock loads considerably prevail over vibration, which corresponds to this motor rotor speed. The cause of vibration initiation generated by the motor rotor spinning was determined by theoretical methods. Vibration on the one hand appears as a result of bearings wear accompanied by bearing cage deformation and their shaft spinning axes reciprocal displacement, and on the other hand, by shaft eccentricity radii enhancement which causes dynamic loads increase affecting bearing units. The authors of the paper have come to the conclusion that in order to lower vibration of the motor it is necessary to replace the bearings with the new ones, the former due to a long-term service (over 30 years), vibration and shock load effects having exhausted their life span. 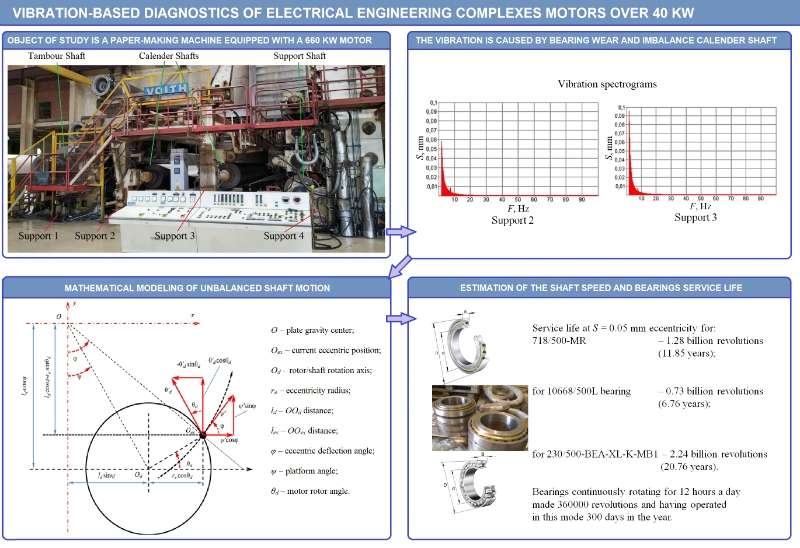 The main reason for motor base vibration is violent vibrations of rotor with worn-out bearings [1-5]. In this paper the reason for electromechanical complex (EMC) increased vibration is theorized by the authors aiming at its further improvement and service life increase.

Bearings vibration with rotation frequency can appear for one of three reasons: bearing ring slipping on the mounting seat, outer ring rolling off or inner ring wearing [1-6]. The last two reasons are accompanied by the bearing geometry change and therefore by shaft eccentricity initiation. There are two types of eccentricity: static one, which is characterized by radial or angular rotor spinning axis displacement about stator axis; and a dynamic one, characterized by varying with time rotor spinning axis position about stator axis [7-10]. It becomes evident that dynamic shaft eccentricity is the most dangerous one, because as it rotates, inertia force appears having additional force impact on constructional elements as well as swinging the construction itself. The force which appears when unbalanced shaft with dynamic eccentricity rotates changes directionally with the period corresponding to the shaft full turn and is proportional to its squared rpm [7]. Static eccentricity does not have any significant impact on the machine operation.

When carrying out vibration tests of large-power DC motor comprised in EMC, the following spots were selected: 4 on each support (Fig. 1). Vibration was measured within 2-100 Hz frequency range (for greater measurement precision – within low frequency range) vertically, while the accelerometer was mounted on supports. Vibration signals diagrams picked by the vibration meter on the set spots were transferred to the computer, and spectrograms of the recorded signals were obtained, some of them shown in Fig. 2. 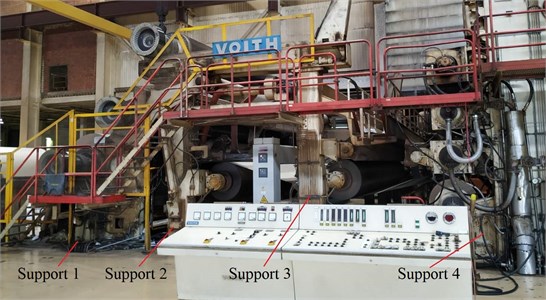 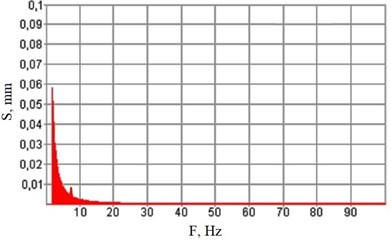 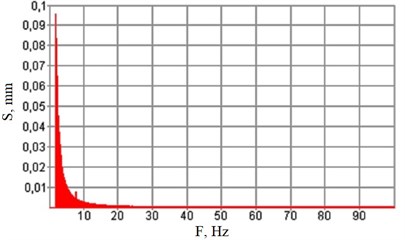 3. 7-8 Hz harmonics is observed nearly in all spectra corresponding to the electric motor rotor frequency.

The reason for vibration is supposed to be the electric machine rotor bearings wear, as the crack in EMC base initiated after relatively long (over 30 years) machine operation.

3. Physical model of rotor spinning in a large-power motor

Motor with an unbalanced rotor is fixed on the platform by mounts (supports) described by visco-elastic bindings [13-14]. Thus, when the rotor is spinning, the motor is able to oscillate normally about the plate plane surface. When the motor is running, the platform itself swings affected by inertia forces of the motor. 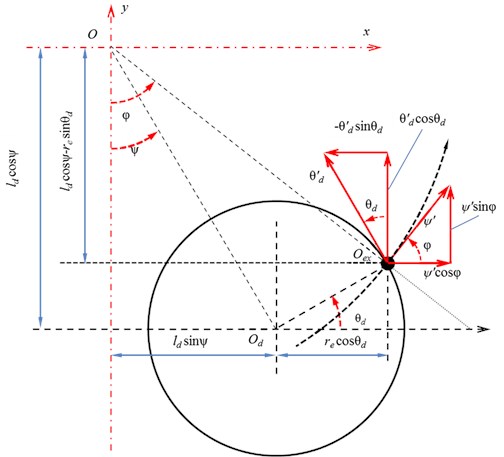 Eccentric complex motion is decomposed along axis and as visually explained in Fig. 3. The distance from plate gravity center to current eccentric position ( arm of length) and eccentric deflection angle function from the vertical symmetry axis when swinging are determined by:

Arm length and deflection angle are variables depending on rocking angle and motor rotor angle . Derivatives of these values in time are expressed:

Taking into consideration Eq. (1) and Eq. (2) the expression of the kinetic energy for the system’s moving masses (Fig. 3) can take on the following [12]:

Potential energy is determined by compression and extension of the motor rotor supports, thus its expression is the following:

The system is also affected by other forces, for example, damping in mounting units [12]:

where , , – resulting mount damping coefficients in , and directions. At a first approximation, counterforces of mount bodies’ reciprocal displacements are supposed to depend on speed while the energy released is proportional to the value of these displacements. Damping effect is also observed at electromechanical energy conversion in asynchronous motor. The point is that electromagnetic torque is formed as a result of stator and rotor winding current interaction. In resistances of these circuits, losses appear at the current flow causing energy dissipation effect [15].

According to Lagrange principle, for each independent coordinate or state variable, considering Eq. (5) and Eq. (6), the following dynamic equilibrium equations are valid:

Using Eq. (3), Eq. (4) and Eq. (7), the kinematic and energy processes are described in a system with a DC motor, which rotates a calender shaft weighing 29.5 tons at a maximum permissible speed of 1320 rpm. Basing on recalculated motor shaft displacement values, bearings’ life was determined which are used (or suitable for use) on the paper machine in question according to Eq. (8) (disregarding load axial component) [16]:

Radial load in its turn represents shaft vibration action and can be determined as follows [16]:

The main reason for EMC vibration was found to be an increase in DC motor rotor unbalance, driving the machine calender rolls. Maximum vibration at the motor rotor speed was observed in this area. Eccentricity increase aggravated by shock loads contributed to destruction of bearings on which the electric machine rotors are mounted.

Mathematical models were proposed aimed at dynamic mechanical processes estimation in oscillatory system with unbalanced shafts, their rotation causing both forward and rotational motions of its elements.