Copyright © 2022 Xintao Zhou, et al. This is an open access article distributed under the Creative Commons Attribution License, which permits unrestricted use, distribution, and reproduction in any medium, provided the original work is properly cited. 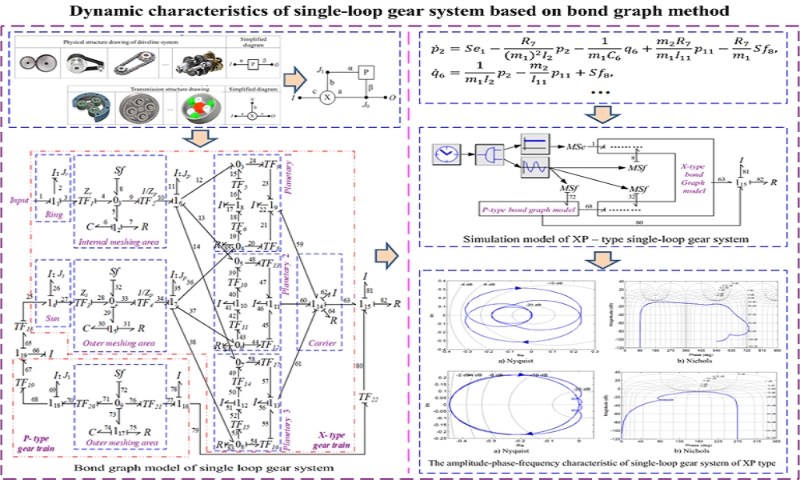 Gears and gear products are important basic components of mechanical equipment. The main transmission parts of complete mechanical equipment are mostly gear transmission [1, 2]. With the rapid development of science and technology, the annual sales volume of gear industry has exceeded hundreds of billions RMB, forming a diversified coexistence of enterprises and common development of the industry pattern [3, 4]. In addition, as low-carbonization has become the theme of global manufacturing development, energy conservation and emission reduction will be the direction of technological development faced by enterprises all over the world. The industry should seize the opportunity of low-carbon economy and intervene in the research of new transmission technologies such as hybrid power and stepless speed regulation in advance [5]. In order to better meet the current application requirements, the new gear transmission system composed of gears and gear products is developing towards miniaturization and cyclization, resulting in more complicated structural changes [6, 7]. The kinematics and dynamics of the system have also become extremely complex. Therefore, traditional modeling methods are difficult to accurately obtain the dynamic behavior of the system. Such as, the dynamic load-sharing characteristics of aircraft face gear dual-power split transmission system are taken as the research object. Considering the factors of time-varying meshing stiffness, comprehensive error, backlash, support clearance, spline clearance, torsional stiffness, and support stiffness, the dynamic load-sharing model was constructed based on the lumped-parameter method [8]. Moreover, the time consuming, laborious, and intuitive nature of those methods leads to long development cycles for gear systems [9, 10].

In addition, bonding graph modeling has been widely used in the field of machinery. Such as, the Bond Graph methodology is originally employed to obtain a per-unitized dynamic model for a wind turbine two-mass drive train. Bond Graph is a formal multi-domain methodology that strongly enforces the energy conserving property. A natural outcome of applying this methodology is a reliable and dimensionally homogeneous per-unit dynamic model. This methodology is utilized to address the lack of dimensional homogeneity in some drive train models that are being used in the wind energy literature [22]. The aim of this article is to present an efficient dynamical model for simulating flapping robot performance employing the bond graph approach. For this purpose, the complete constitutive elements of the system under investigation, including the main body and accessories, flapping mechanism, flexible wings and propulsion system consisting of a battery, DC motors and gear boxes, are considered. A complete model of the system was developed appending bond graph models of the subsystems together utilizing appropriate junctions. SimMechanics toolbox of MATLAB software was used to investigate whether the equations obtained from the bond graph were extracted correctly and whether the relationships between all the subsystems are maintained so that they lead to a logical motion for the flapping wing. The very good agreement between the results achieved from various models illustrates the validity and accuracy of the proposed bond graph model [23]. When the precise mathematical model is established of gear train, the dynamic behavior of vibration characteristics and stability of the motion system can be truly grasped [24-27].

According to the advantages of bond graph modeling method and combined with the structural properties of gear transmission system, an accurate dynamics model of single-loop gear system is established by bond graph method in this paper. The dynamic characteristics of this system under linear and weakly nonlinear states are studied. The relevant research results of this paper will provide guidance for the design concept of new gear transmission system, or provide theoretical reference for the design of complex loop system.

Fixed axle gear train module is the most basic and simplest gear transmission unit, also known as basic gear system. Its main characteristics are: the element body has and only 1 degree of freedom; Integrated input, output shaft each one; the initial position of the axis line of each gear always remains unchanged. According to the simplified rule of transforming the gear transmission system into an equivalent transmission structure diagram in literature [28, 29], the structure diagram of the fixed-shaft gear module is constructed, as shown in Table 1. Where, "□" represents the image diagram of gear box, is the code of the fixed shaft unit body, and are the input and output ends of the unit body, and are the equivalent input and output shafts of the unit body. The fixed shaft gear train unit body is referred to as P unit body. It is likely to a pair of meshing gears, or a complex fixed shaft gear train.

Planetary gear module is also the most basic, and simplest transmission unit, also known as differential gear system. Its main characteristics are: the element body has two degrees of freedom; there are three shafts connected with the turnover unit body; The element body has differential characteristics. Similarly, the construction method of the structure diagram of planetary gear train unit is the same as that of fixed-axis unit, as shown in Table 2. Where, "○" represents the image diagram of a single row of planetary discs, is the code of the turnover unit body, , and are the three shaft ends of the turnover unit body respectively, and , and are the equivalent drive shafts (basic components) of the turnover unit body respectively. This type of planetary gear train element can also be called element. For practical use, such as two inputs and one output, unit body in this case constituted a confluence output mechanism. Conversely, there may be two outputs and one input, and the element body in this case constitutes a shunt output mechanism.

As shown in Table 3, the structure chain diagram of single-loop and single degree of freedom (DOF) gear transmission system, XP type is composed of a set of basic gear train of DOF fixed axle element body and a set of differential gear train of 2 DOF turnover element body.

According to the bond graph modeling principle, the fixed-axis module model is established, as shown in Fig. 1.

Under such conditions, the bond graph model of planetary gear modules is obtained, as shown in Fig. 2.

Based on the bond graph model of fixed axis module and planet module, and combined with the structural characteristics of XP single-loop gear system, the dynamics model of the gear train was established by bond graph method, as shown in Fig. 3. 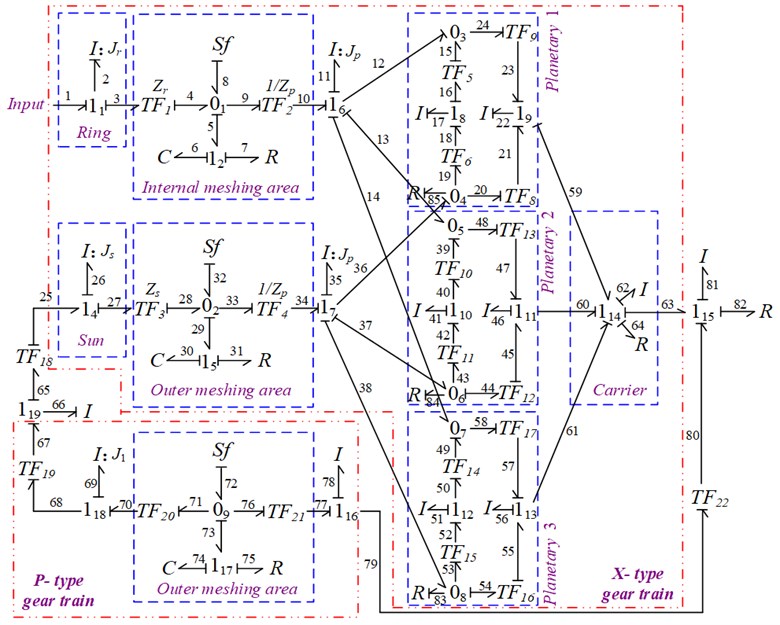 The basic form of the state equation of its dynamic system is be written as shown in Eq. (1):


where, is the conversion coefficient of the converter, 1, 2,…, 22; is the potential source of the input; , and are steady-state transmission errors.

According to the bond graph model of XP type single-loop gear train given in Fig. 3 and combined with the setting requirements of numerical simulation software, the simulation model as shown in Fig. 4 is constructed. In this figure, keys 8, 32 and 72 are the steady-state transmission errors of internal and external engagement of x-type element and external engagement of P-type element respectively, and the derivative of this quantity is used as a variable flow source element to simulate. The potential source element is used to simulate the input torque to the system.

According to the Nyquist diagram shown in Fig. 5(a), the open-loop frequency characteristic curve of the system does not enclose the point (–1, ) and passes through the positive real axis twice clockwise, so the system is unstable according to the Nyquist stability criterion. At the same time, it can be seen from the local magnification of Nyquist diagram that the phase diagram of open loop system does not pass through the origin. Nichols diagram as shown in Fig. 5(b), the vertical axis is the logarithm of amplitude and the horizontal axis is the phase Angle, which reflects the changing relationship between amplitude and phase Angle. The figure, further demonstrates that the closed loop system of XP single loop gear system is unstable under such simulated conditions. 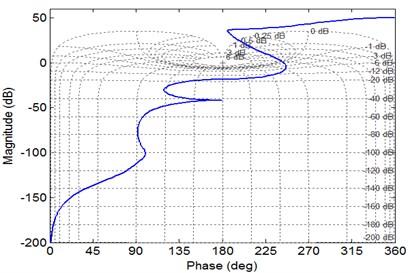 Likewise, it can be seen from the amplitude and phase characteristic diagram in Fig. 6(b) that, the amplitude margin and phase frequency margin of XP type single-loop gear system state are both infinite. Therefore, the system is stable under current conditions. 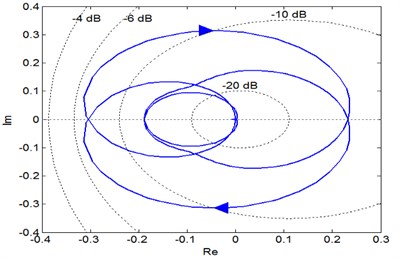 4.3.2. Dynamic characteristics from input to X system in a single loop

The system shown in Fig. 7(a) is a subsystem of the XP type single-loop gear system. The subsystem cuts off from the input end to the x-type element body to study the stable state of this type of subsystem in the single-loop system. By using the above analysis method, it is concluded that the dynamic characteristic state of the subsystem is stable. 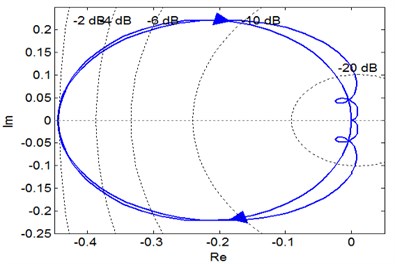 4.3.3. Dynamic characteristics from input to P system in a single loop

The phase diagram shown in Fig. 8 is also a subsystem of the XP type single-loop gear system. The subsystem cuts off from the input end to the P-type element body to study the stable state of p-type element subsystem inside the single-loop system. Similarly, by using the same method, it is concluded that the P-type cell subsystem is also stable inside the single-loop system. Therefore, it is concluded from the above analysis that when the whole system is stable, the subsystems in the system are also stable. 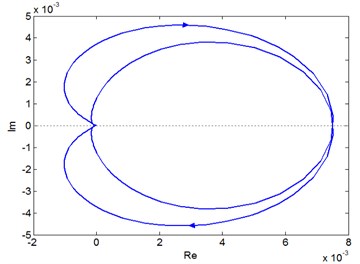 In this research, study on dynamic characteristic of XP type single-loop gear system based on bond graph method. Simulation has been conducted to prove the efficiency of this method. The conclusions are listed as follows:

1) In accordance with the structural attributes of the gear transmission system, the P-type fixed-axis unit and x-type planetary unit modules are obtained. On this basis, the system structure diagram of XP type single-loop gear system is established.

3) The dynamic characteristics of XP single-loop gear train are received by numerical simulation, such as Nyquist diagram and Nichols diagram, which reflected the dynamic law of the system.