Copyright © 2022 Jian Han, et al. This is an open access article distributed under the Creative Commons Attribution License, which permits unrestricted use, distribution, and reproduction in any medium, provided the original work is properly cited.

With the continuous popularization and application of TBM equipment and technology in the field of coal mine, aiming at the problems of small torque and small propulsion of existing TBM advanced exploration drilling rigs for coal mine, which is difficult to drill long borehole, and lack of special high-power drilling equipment to match with it, a high-power drilling rig for coal mine TBM is developed. This paper introduces the structure of the drilling rig, analyzes the structure and principle of the luffing mechanism and the rotary table protection device, also the strength of the key parts. Through the application in Guineng Group Heilaga Juxin coal mine shows that this equipment has large torque and propulsion, the hydraulic system and operation mode meet the requirements of long-distance separate layout in TBM. The drilling rig has good stability and high efficiency, and can meet the various needs of long drilling for advanced exploration, which promotes the application of TBM equipment and technology in the field of coal mine.

In recent years, the drivage efficiency of rock roadways has become an important factor restricting the high-efficiency and high-quality development of the coal industry. At present, cantilever road headers are used widely in China with traditional methods that drilling and blasting. There are so many technical problems such as low efficiency, imbalance in coal mining and tunneling, and poor safety. Compared with traditional methods, TBM technology can realize continuous rock breaking, rock loading, reloading, support, spray dust prevention and other processes. It has a high degree of mechanization, simple process, fast construction speed, high construction quality, simple support, and work security and other advantages [1-3].

Usually, before using TBM to the construction of mines, tunnels and urban underground pipe corridors, a comprehensive geological survey and exploration will be carried out. Accurate geological conditions can be reported through a variety of technologies and methods. During the construction, most of the advanced explorations are using geophysical methods, although equipped with advanced exploration drilling rigs, the frequency of use is relatively low. However, the tunneling construction in coal mines has such problems as large construction depth, complicated geological conditions, and the difficult to accurately predict the exploration in the early stage. For these reasons, Chinese government has made a mandatory requirement of "exploration at every excavation, first exploration and then excavation". At present, the advanced exploration rig equipped with TBM generally adopts the impact-rotary, the torque and thrust are relatively small (torque no more than 1000 Nm, thrust is about 5-20 kN), and the depth of drilling generally no more than 30 m. Frequent drilling and tunneling alternation has a great impact on the tunneling efficiency. In addition, the diameter of the drill holes are generally small, and the accuracy of drilling is poor, easy to be affected by the combination of propulsion force, rotation torque and shock wave. Inclination affects the accuracy of advanced exploration. These problems greatly restrict the popularization and application of TBM equipment in coal mines.

Combining the characteristics of TBM's internal space structure and advanced exploration construction requirements, the drilling rig is designed with a split layout, consisting of a main unit, an operation station, and a pumping station, and each part is connected by high-pressure tubing. The whole machine adopts electro-hydraulic control hydraulic system, which is operated by remote control. The main unit and operation station are set in the trailer behind the TBM cutter head, and the pump station is arranged behind the main engine about 50 m. During drilling, the drill pipe can pass through the cutter head from the annular space between the shield and the propulsion mechanism, thereby realizing the advance exploration drilling construction around the front of the tunnel.

The main unit is mainly composed of a rotary head, a clamper, a propulsion device, a luffing mechanism, a base, and so on. The rotary head is equipped with a hydraulic chuck, which can clamp the drill pipe and provide drilling rotation power; the clamper is used to clamp the drill pipes in the hole, and cooperates with the rotary head to accomplish the screwing and unloading of the drill pipe thread; the cylinder of the propulsion device can drive the rotary head to reciprocate along the guide rail, which is provide the drilling pipe with propulsion force or pulling force; the luffing mechanism is used to adjust the circumferential angle, main shaft angle, working radius and other parameters to meet the requirements for drilling hole. 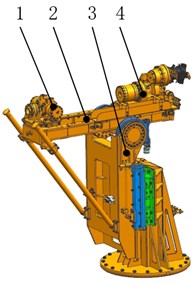 3.1. The design of the new luffing mechanism

Fig. 3. The gestures of drilling rig: a) circumferential adjustment; b) adjustment of main shaft angle 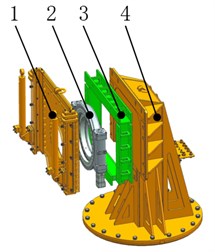 In order to solve the problem of the pressure oil in the pipeline returning to the hydraulic pump during the power-off process, which causes the pump to reverse and impact damage, a power-off protection hydraulic control circuit is designed. Before the power is cut off, the electromagnetic unloading valve can be opened in advance, and the hydraulic pump is transformed from a constant pressure state to a large flow unloading state, which reduces the pressure in the pipeline, thereby solving the above problems.

Fig. 6. Construction state in coal mine 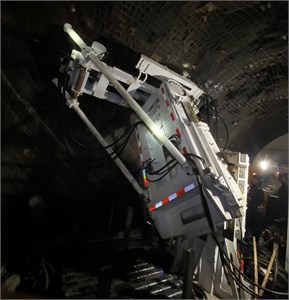 1) This high-power advanced exploration drilling rig for coal mining TBM, which is developed according to the compact space inside the TBM. The main machine and operation station is front-mounted, and the power pump station is rear-mounted. The torque capacity, feed and pull-out force are large, also the whole drilling rig with a good stability. It can meet the long boreholes construction needs of TBM advanced exploration in underground coal mines.

2) The drilling rig can be mounted on a TBM with a diameter between 3.5 m and 6 m. The luffing mechanism is designed for the characteristics of TBM's advanced exploration. The adjustment range of circumferential angle, spindle inclination, and working radius is large, which can meet the needs of various advanced exploration drilling arrangements.

3) The application in Guineng Group Heilaga Juxin Coal Mine shows that the hydraulic system and operation mode of the whole drilling rig meet the requirements of long-distance separation layout. The drilling ability is good, and good construction efficiency has been achieved. The development of this equipment promotes the application of TBM equipment and technology in the field of coal mine.