Copyright © 2022 Qichao Wang, et al. This is an open access article distributed under the Creative Commons Attribution License, which permits unrestricted use, distribution, and reproduction in any medium, provided the original work is properly cited.

In 1996, Michael Mc Vay [4] used PLASFEM software to conduct finite element analysis on the pull-out test of embedded bars, and obtained that the bonding stress of embedded bars can be regarded as uniform distribution in the re bonding section.

To sum up, this paper arranges the research purpose:

1. The data of Hilti re-100 structural adhesive are accurately measured through indoor pull-out test under laboratory conditions, so as to provide effective data reference for practical engineering application.

2. Carry out the pull-out test under the same conditions for the Reinforcement planting specimen and the embedded steel bar specimen, explore the similarity between them, and provide the research direction for the next stage. The existing research results of planting reinforcement are demonstrated.

3. Use Hilti re-100 structural adhesive to plant reinforcement on the specimen, and analyze the effects of concrete strength, reinforcement diameter and planting depth on the anchorage performance of planted reinforcement. 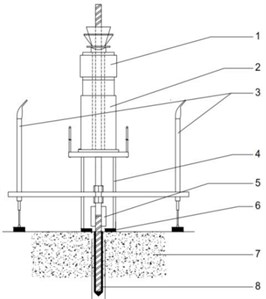 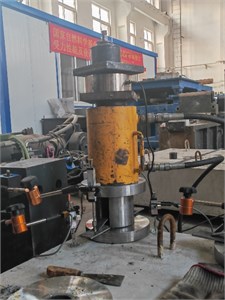 According to the scheme design, this test carries out the pull-out test on the Planting reinforcement specimen from three point of views: concrete strength, steel bar diameter and steel bar planting depth. The Planting reinforcement specimen is compared with the embedded steel bar specimen. The experimental parameters are shown in the below table. This test adopts the restraint pull-out test method, and the experimental device is shown in Fig. 1(a), (b). A is the schematic diagram and B is the actual test device diagram. In the test, in order to ensure the accuracy of displacement data, four displacement meters are set up respectively. In Fig. 1, 3 is a displacement meter placed symmetrically to measure the displacement of the root of the reinforcement, and 5 in Fig. 1 is to measure the small deformation of the surface of the concrete substrate during the test. The final reinforcement slip value is obtained from the difference between them.

There are four grades of concrete in this test. The average cube compressive strength of the measured concrete is shown in below Table 1. The pouring size of base material is 1100 mm × 800 mm × 400 mm. Planting and embedding reinforcement on the concrete substrate.

In order to ensure the measurement of final pull, hrb600 hot-rolled high-strength ribbed bars with diameters of 16 mm, 20 mm and 25 mm are selected for all reinforcement in the test. The mechanical properties of the reinforcement used in the experiment are shown in Table 2.

The structural adhesive adopts Hilti re-100 type, and its mechanical properties are shown in Table 3.

The concrete with three strength grades of C15, C30 and C50 is used as the test variable. Three steel bars are planted on each concrete substrate, a total of 9 steel bars. The steel bars are not broken during the test, so there are 9 effective samples. The diameter of the selected reinforcement is 16 mm, the anchorage depth of the reinforcement is 5D = 80 mm, and the drilling diameter is 20mm. The test results are shown in Fig. 2 and Fig. 3. 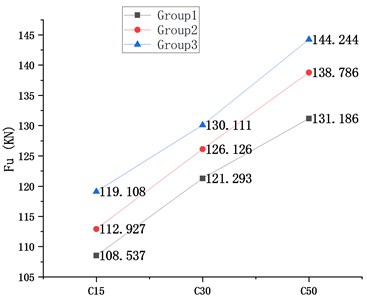 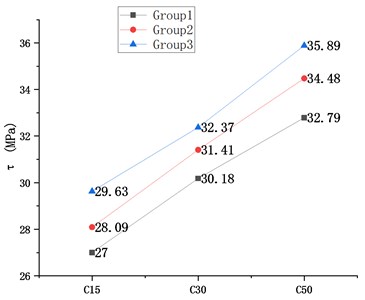 It can be seen from Fig. 2, 3 that when the reinforcement diameter is 16mm and the anchorage depth is 5D, the ultimate tensile force and ultimate bond strength of the embedded reinforcement specimen increase linearly with the increase of concrete strength. The failure mode is structural adhesive and reinforcement peeling failure, as shown in Fig. 4. 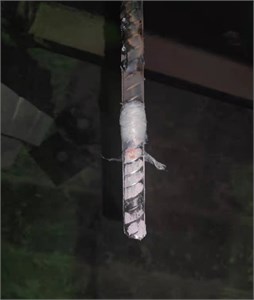 The diameter of reinforcement shall be 16 mm, 20 mm and 25 mm respectively, and the anchor depth shall be 80 mm, 100 mm and 125 mm respectively. The concrete grade is C25. The drilling diameter is 20 mm, 25 mm and 32 mm. There are 3 bars of each diameter and 9 effective specimens. The test results are shown in Figs. 5 and 6. Because the ultimate pulling force of the test piece is relatively close, it cannot be effectively marked in the figure. The detailed data are shown in Table 4. 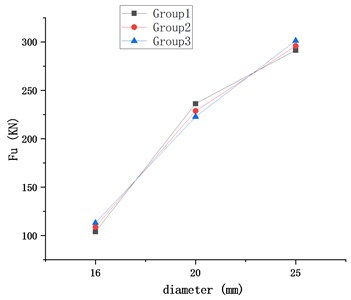 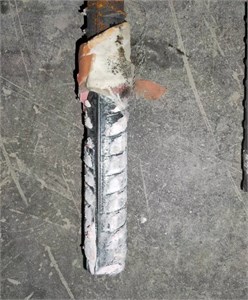 The reinforcement diameter is 16 mm, the concrete strength is C25, and the planting depth is 5D, 7d and 10d respectively. The corresponding lengths are 80 mm, 112 mm and 160 mm. There are three specimens with the borehole diameter of 20 mm and the depth of embedded reinforcement of 5D and 7d respectively, and four specimens with 10d. One of the four specimens with a depth of 10d was broken during the test. So, the valid data are 9 groups. The test results are shown in the figure. Figs. 8 and 9 shows since the ultimate pulling force is close, it cannot be effectively marked in the figure. The detailed data are shown in Table 5. The failure mode is spalling failure of structural adhesive and reinforcement. 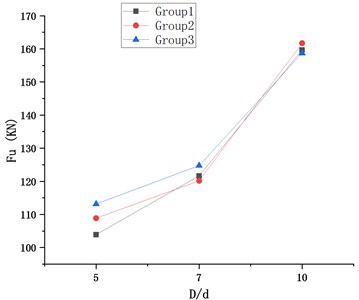 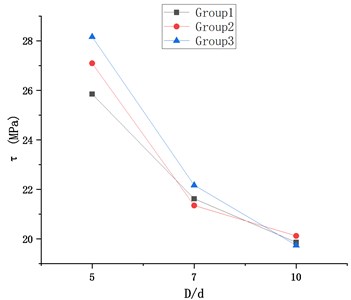 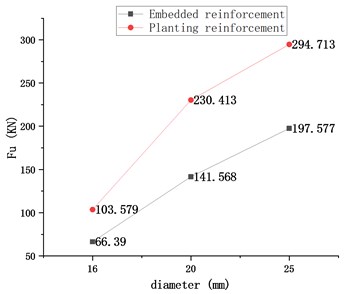 At present, there are three main methods to obtain the bond slip curve. The first is obtained from the measured data, in which the bond strength can be obtained according to the following formula: 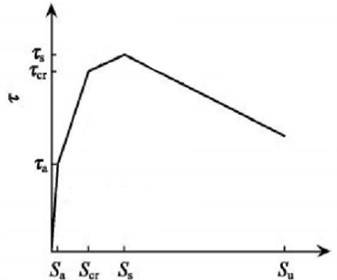 In this paper, the bond slip relationship between concrete group, reinforcement diameter group and reinforcement diameter of 16 mm and 25 mm in embedded group is established, as shown in Figs. 14-22. The established curve basically conforms to the four-segment broken line bond slip curve proposed by Jianrong Zhang. The end points of each stage in the figure are marked with A, B and C. 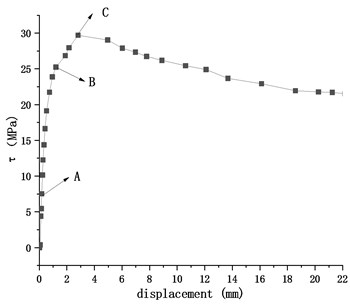 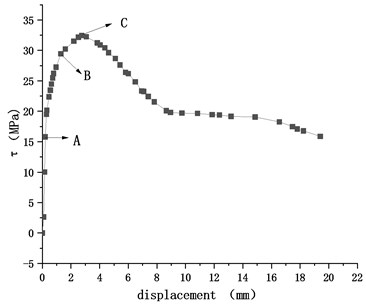 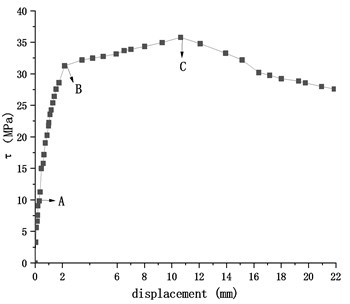 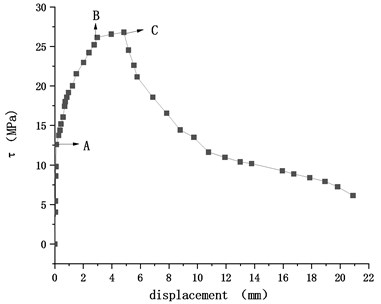 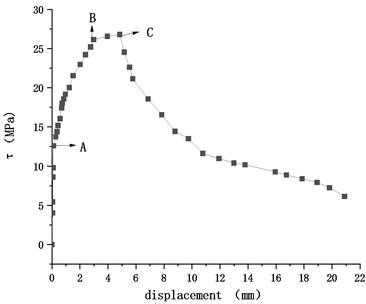 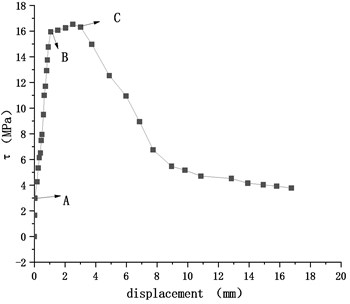 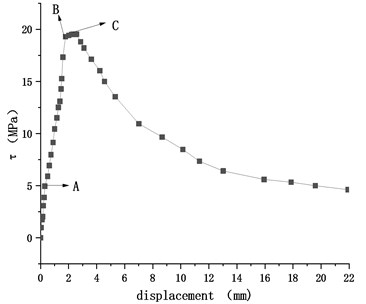 1) The pull-out test results of Planting reinforcement in concrete group show that the ultimate tensile force and ultimate bond anchorage strength of embedded bars increase with the increase of concrete and show a linear relationship. The failure mode is the peeling failure of structural adhesive and reinforcement.

5) The bond slip relationship curve under the measured data is established, which is basically consistent with the four-segment broken line bond slip curve related to Jianrong Zhang. It can be seen from the image of the concrete group that with the improvement of the concrete grade, the longer the displacement involved in the third stage (splitting stage) in the test stage. The concrete strength is C50, which is the third stage displacement of nearly 10 mm. According to this phenomenon, it can be concluded that the strength grade of concrete is a very important factor for the anchorage performance of embedded reinforcement. The higher the strength grade of concrete, the better the anchoring effect of reinforcement. The images presented in the reinforcement diameter group show that changing the reinforcement diameter has little effect on the bond slip curve. It means that not the larger diameter of the reinforcement is, the anchorage performance of the embedded reinforcement specimen is more favorable.

6) By comparing the bond slip curves of embedded steel bar specimens and Reinforcement planting bar specimens, it can be seen that the trend of the two curves is basically the same. In this paper, it is considered that there are great similarities between the stress and anchorage mechanism of them, and the research direction of the future subject can be studied from these two aspects.

7) Through the high-precision test under laboratory conditions, this paper obtains the relevant data about the reinforcement of concrete by planting reinforcement technology, which provides a data reference for practical engineering.