Copyright © 2022 Wei Li, et al. This is an open access article distributed under the Creative Commons Attribution License, which permits unrestricted use, distribution, and reproduction in any medium, provided the original work is properly cited.

Vibration sensors are the core component of aviation and aerospace equipment vibration monitoring [1], earthquake and tsunami monitoring and early warning [2], internet of things [3] and other fields. With the development of science and technology, higher requirements are put forward for its vibration signal sensing accuracy. As the calibration equipment, electromagnetic vibration exciters determines the calibration accuracy of vibration sensors, so its performance improvement is urgently.

Among the existing steady-state sinusoidal vibration generation methods, in order to suppress harmonic interference of electromagnetic vibration exciters waveform, mechanical technologies such as air floatation guidance [4] and control methods such as fuzzy control [5] and self-sensing control [6] have been applied. Meanwhile, in order to improve the uniformity of air gap magnetic field distribution, extensive studies have been conducted on magnetic circuit structure [7, 8]. However, most of them focus on static magnetic circuit analysis, and in the actual operation of electromagnetic vibration exciters, the interference magnetic field generated by driving current will also affect the distribution characteristics of air gap magnetic field, and will produce a large number of eddy currents, resulting in the change of calibration environment. The skin effect of the alternating driving current on the surface of the pure ferromagnetic yoke on both sides of the air gap produces eddy current loss, emits heat and conducts it to the vibration sensors, making its calibration result inaccurate. Increasing the air flow around the driving coil to accelerate the heat dissipation can play a certain role, but will bring additional mechanical noise interference. The experimental method of alternating with large and small acceleration can slow down the temperature rise [9, 10], but will reduce the working efficiency of the vibration exciters. Therefore, the problems of temperature change of the working platform and uneven distribution of magnetic field caused by the driving current are still seriously.

In this paper, a magnetic field tracking compensation method for electromagnetic vibration exciters is proposed. By setting the compensation current in the magnetic circuit structure which is opposite to the driving current phase, to effectively suppress the driving current eddy current effect and dynamic magnetic field interference, avoid the heat from eddy current loss to change the calibration environment of vibration sensor, reduce the influence of disturbance magnetic field on vibration waveform accuracy, and verify the effectiveness of the proposed method through simulation.

The basic principle of the electromagnetic vibration exciters is shown in Fig. 1. The driving coil is placed in the direction of perpendicular magnetic inductance in a magnetic circuit with uniform magnetic field distribution, and an alternating current is passed through the coil, which is subjected to amperage and produces vibration. Suppose that , and are the mass, stiffness and damping of the moving part, , and are the length, inductance and resistance of the drive coil, and are the current passed into the driving coil and the voltage applied at both ends respectively, , and are the displacement, velocity and acceleration of the moving part relative to the zero point, then the electromechanical coupling equation can be obtained as [4], [11]:

Therefore, the displacement-voltage transfer function of the electromagnetic vibration exciters is:

In the current research on steady-state sinusoidal vibration generation methods, most of the research on the uneven distribution of magnetic field with long air gap focuses on the analysis of magnetic circuit structure, and quite mature research results have been obtained. However, the disturbing magnetic field generated by the driving current also affects the distribution characteristics of the air gap magnetic field and influences the distortion of the vibration waveform. The precision characteristics of high-sensitivity sensors also need strict requirements for their operating environment, but eddy current losses from alternating drive currents can cause changes in ambient temperature, making the calibration result inaccurate with interference factors. Therefore, in order to analyze the electromagnetic effect of the driving current, a closed-double-magnetic circuit of the electromagnetic vibration exciters is established as shown in Fig. 2.

Fig. 2. The model of closed-double-magnetic circuit 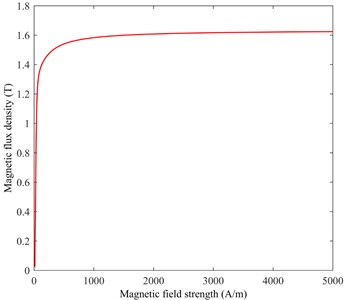 The relative permeability of soft magnetic materials used in the magnetic yoke directly affects the uniformity of magnetic induction intensity distribution in the air gap. Therefore, the electromagnetic pure iron material named DT4C is selected, which is characterized by high saturation magnetic induction intensity, high permeability and low coercivity, and the maximum relative permeability up to 15000. The magnetization characteristic curve is shown in Fig. 3. NdFe32 permanent magnet material is selected for the permanent magnet, and the magnetic poles of the two permanent magnets are arranged opposite to each other. The driving coil is made of copper with good conductivity and is wound evenly on the moving coil skeleton, with 20 turns and a thickness of 5 mm. 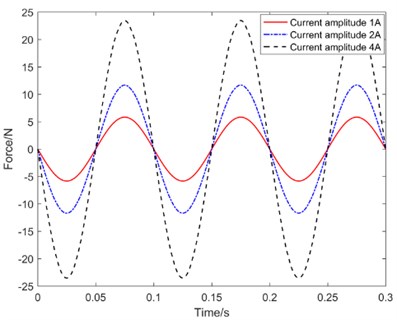 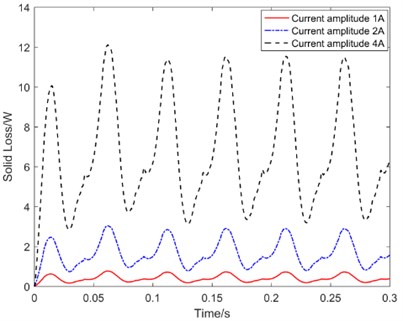 As can be seen from Figs. 4-5 and Table 2, under the same vibration frequency, eddy current loss increases by the square of the driving current growth multiple, and emitting a large amount of heat. When the output force of the driving coil and the current value increase by the same factor, the harmonic distortion of the output driving force also increases, that is, the effect of the alternating drive current on the uniformity of the air-gap magnetic field distribution worsens as the drive current increases. Therefore, it is necessary to suppress the electromagnetic response of the drive current, reduce the heat emitted by eddy current losses to avoid the thermal disturbance and thermal deformation problems, reduce the dynamic magnetic field interference, ensure the high uniformity of the air gap magnetic field distribution during exciters operation, and achieve the approximately ideal linear electromagnetic driving force characteristics.

a) Method Ⅰ with microstructure

Fig. 7. The relationship between the eddy current loss of the drive coil, the total harmonic distortion of the force waveform and the compensation current 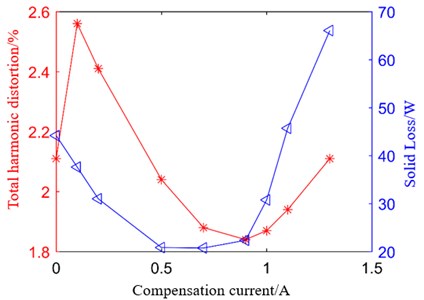 This research work is supported by the National Natural Science Foundation of China of No. 52075133.