Copyright © 2022 Hamdy M. Youssef, et al. This is an open access article distributed under the Creative Commons Attribution License, which permits unrestricted use, distribution, and reproduction in any medium, provided the original work is properly cited.

In this paper, a new analysis of thermoelastic, homogeneous, and isotropic nanobeams has been constructed in the context of the Green-Naghdi type-II heat conduction law. The first end of the nanobeam is based on a graphene strip, which contains an electrical current with a small voltage which is a novel application. Under simply supported boundary conditions with fixed side ratios, the nanobeam has been thermally loaded with a heat source due to the thermal effect of the electrical current. On the time variable, the Laplace transform technique was utilized to solve the governing differential equations. The solutions were computed in the Laplace transform’s domain. Tzou’s approximation technique based on an iteration formula was used to calculate the Laplace transform inversions numerically. The numerical findings for various values of the electrical voltage and electrical resistivity of the graphene nano-strip have been displayed using graphs illustrating distinct scenarios. All the nanobeam’s researched functionalities have been reported to be influenced by electrical voltage and electrical resistivity. The electrical voltage and resistivity of a graphene nano-strip might be utilized as a tuner to regulate the nanobeam's vibration and energy.

Green and Naghdi (G-N) proposed three different theories of thermoelasticity based on entropy equality rather than entropy inequality [9-11]. In each theory, the vector of the heat flux vector has a distinct constitutive consideration. As a result, Green-Naghdi type-I, Green-Naghdi type-II, and Green-Naghdi type-III were developed. The classical thermoelasticity system is the same as a type-I theory in linearized form. There is no energy dissipation in the type-II theory; instead, it is regarded as a specific instance of type-III, which contains energy dissipation in its definition [12-17].

In mechanics, the study of viscothermoelastic materials, often known as relaxation characteristics, is becoming increasingly relevant. Biot has published on viscothermoelasticity theory and thermodynamic vibrational principles, among other topics [25, 26]. Drozdov devised a constitutive model for the viscothermoelasticity behaviour of polymers when they are exposed to finite stresses [27]. To study the relaxing effects of volume-features of viscoelastic materials thermoelasticity, Ezzat and El-Karmany used a novel thermo-viscoelasticity model for isotropic media devised by the authors [28]. Carcione et al. devised a numerical technique for wave simulations in elastic media based on the Kelvin-Voigt mechanical model [29]. Grover studied transverse vibrations in micro-scale viscothermoelastic beam resonators [30-32]. A homogeneous thermoelastic thin beam with vacancies on the micro/nano-scale was studied by Sharma and Grover in terms of closed-form equations for transverse vibrations [18]. Grover and Seth studied viscothermal elastic micro-scale beam resonators using a dual-phase lagging model [33].

Since the groundbreaking observations of Novoselov et al., graphene has continued to pique the interest of scientists around the world [34]. Single-layer graphene has exciting electrical features, including ballistic transport, a quantum Hall effect at ambient temperature, and a size-dependent band gap, all of which have the potential to allow new types of nanoscale electronic devices and sensors, such as transistors [35].

Green-Naghdi type-II heat conduction law has been used for the first time in this study to analyse thermoelastic, homogeneous, and isotropic nanobeams, which have a graphene strip as the initial end of the nanobeam linked to a low voltage electrical current. The nanobeam will become thermally loaded with a heat source as a result of the electrical current's thermal action on the low-voltage nano-graphene strip. The microbeam was electrically isolated using an electrical isolator with high thermal conductivity.

We consider the flexural deflections are very small for a thin thermoelastic nanobeam of thickness , width , and length .

Fig. 1. Rectangular thermoelastic nanobeam based on an electrical insulator and a nano-strip of graphene

The , , and -axes are defined through the longitudinal, width, and thickness directions of the beam as in Fig. 1.

In an equilibrium state, the nanobeam has no damping, unstressed, unstrained, and the reference temperature is everywhere [6].

Beam bending will use the Euler-Bernoulli equation, which states that any plane cross-section that is perpendicular to the beam’s axis (neutral surface) will stay so [30].

where the equation of motion takes the form:

Thus, the equation of motion which gives thermally induced lateral vibrations of the nanobeam takes the form [30]:

where which is called the Green-Naghdi theorem parameter, is the specific heat under constant strain, and is the external heat source.

The cubical dilatation (volumetric strain) has the form:

The upper and lower surfaces of the beam do not have heat transfer, so . Hence, for a nanobeam, we can postulate the temperature depends on a “” function through the thickness direction of the beam, where , which gives [38]:

where is devoted to the temperature increment.

where which gives the thermal viscosity parameter of the material.

After executing the integrations, the Eq. (12) has the form:

The following non-dimensional variables will be used [19]:

(The primes have been dropped for convenience).

Laplace transform will be applied with the following definition:

where the inverse of the Laplace transform takes the form:

where means the real part, while is the imaginary number unit, for faster convergence, many experiments confirmed that the value of the parameter “” could satisfy the relation 4.7 [39].

Consider that the beam is subjected to a particular heating source that comes from the thermal effect due to connection with a simple circuit with electrical resistance (Ω) and electric voltage (V). Then, Joule’s equation of electrical heating is given by:

Then, after using Laplace transform, we have:

The general solution of the Eq. (32) as follows:

The general solution of the Eq. (33) as follows:

That completes the solution of the Laplace transform domain.

The lateral deflection function is as follows:

and the temperature increment function is as follows:

The strain-energy density function through the nanobeam is given by [40]:

The resistivity of the graphene in the nanoscale has values 500 Ω [35].

The aspect ratios of the nanobeam are fixed as 8 and . We will take the range of the nanobeam length ×10-12 m, and the original time , and the relaxation time of order 10-12sec and 10-14sec, respectively.

The figures were prepared by using the dimensionless variables for nanobeam length 1.0, 1.0, , and 1.0. 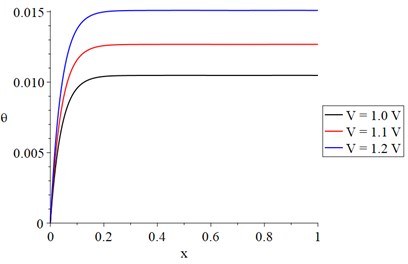 Fig. 3. The vibration distribution with variance voltage and constant resistance 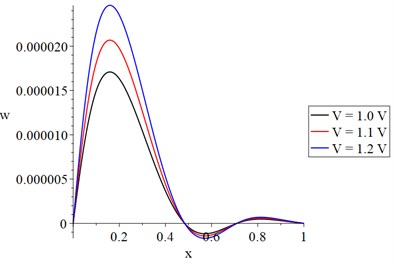 Fig. 4. The strain distribution with variance voltage and constant resistance 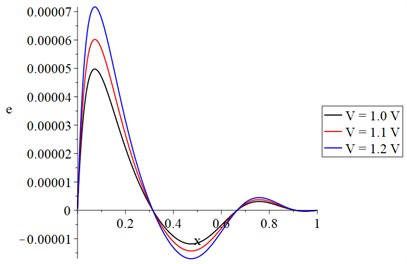 Fig. 5. The stress distribution with variance voltage and constant resistance 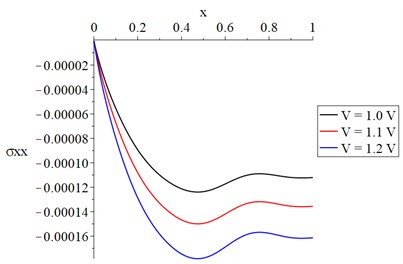 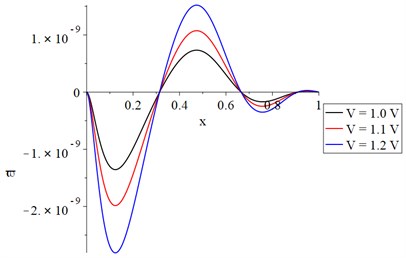 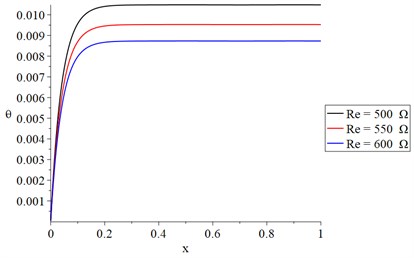 Fig. 8. The vibration distribution with variance resistance and constant voltage 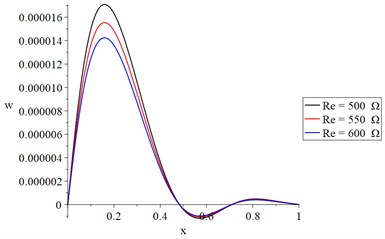 Fig. 9. The strain distribution with variance resistance and constant voltage 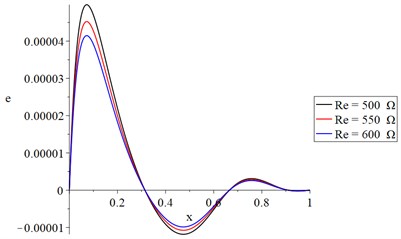 Fig. 10. The stress distribution with variance resistance and constant voltage 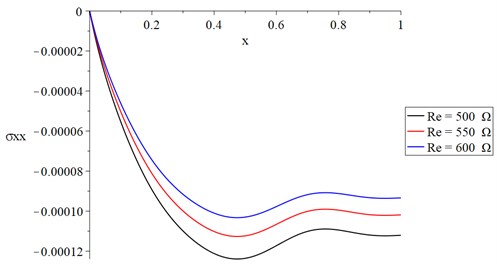 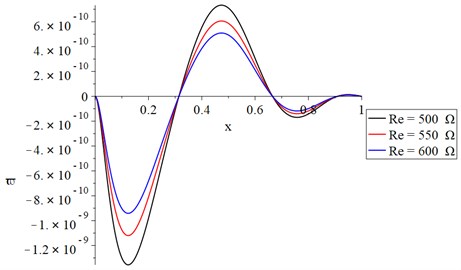 As a result, we can claim that the electrical resistance may be utilized to control both the vibration and the energy generated along the microbeam.

To ensure that the findings are reliable, we compared them to those reported in [36, 37].

Green-Naghdi type-II heat conduction model has been applied to analyze thermoelastic microbeams in this study. The nano-strip of graphene at the microbeam’s beginning end is connected by a low-voltage electrical current. The extended thermoelasticity theory Lord-Shulman model was used. The microbeam has been thermally loaded because of the electrical current operating on a low-voltage nano-strip of graphene.

Electrical voltage and electrical resistance have been discovered to play a substantial role in all the functions tested.

The graphene microstrip might be used as a tuner to regulate the vibration and energy of the microbeam by controlling the voltage and resistance of the microstrip.