Copyright © 2022 Ravil Dashkin, et al. This is an open access article distributed under the Creative Commons Attribution License, which permits unrestricted use, distribution, and reproduction in any medium, provided the original work is properly cited.

The article considers the sources of low-potential heat at oil pumping station, estimates the amount of heat of technological processes that is irretrievably lost in the environment from the oil ACD, cooling systems of electric motors and wastewater treatment plants, and also presents possible ways of utilization and useful use of this heat using heat pumps.

Rational use of fuel and energy resources is today one of the global world problems, the successful solution of which will be of decisive importance for the further development of the world community and the preservation of the environment. The growth of world GDP is largely achieved due to the depletion of natural resources and ecosystems, that is, everything that makes up the so-called natural capital. In 2019, 26.8 % of the global electricity consumption was met by renewable energy sources, together with nuclear energy – 37 %. The share of coal, natural gas and oil in the world electricity production amounted to 63 % or 36.7 %, 23.5 % and 2.8 %, respectively [1].

According to the calculations of the Global Carbon Project, an international research project on monitoring greenhouse gas emissions, in 2021 carbon dioxide emissions worldwide increased by 4.9 % compared to 2020 and amounted to 36.7 billion tons. However, there is reason to hope that global greenhouse gas emissions in 2021 were 5 % less than in 2019. On October 31, 2021, the summit of the G20 countries, whose GDP is about 80 % of the world's, ended in Rome. At the end of the summit, the final declaration was adopted, 66 countries, including the world's leading economies, have recognized the need to achieve global net zero greenhouse gas emissions and carbon neutrality by the middle of the century. They plan to form long-term strategies to achieve zero emissions by 2030 and are going to take measures to limit the growth of global warming at the level of 1.5 °C. A positive example of a significant reduction in greenhouse gas emissions is that across the European Union (EU) emissions have been reduced by 31 % between 1990 and 2020. This is reflecting a shift in public policy in the EU countries aimed at encouraging emissions reduction, as well as increasing investment in energy-saving technologies and renewable energy sources.

The use of new energy-saving technologies based on the utilization of low-potential secondary energy resources is one of the promising ways to solve the problem of high energy intensity of the fuel and energy complex of Russia. A heat pump (HP) is a device for producing heat using a reverse thermodynamic cycle. This is a device for transfer-ring heat energy from a low-temperature heat sensor to a high-temperature heat receiver, the process is carried out with the expenditure of energy on the compressor drive. The schematic diagram of the operation of the most widespread steam compression heat pump unit can be described as follows (Fig. 1).

Currently, there are more than 30 million heat pumps of various capacities operating in the world – from 5 kW to tens of MW. In the US, more than 30 % of residential buildings are equipped with HP, which are combined heating and air conditioning systems. In Sweden, more than a hundred heat pumps with a capacity of 5 to 80 MW have been put into operation in recent years. In Japan, 3 million HP are sold annually, and in the USA – 1 million [2]. Heat pumps are included in the “List of objects and technologies of high energy efficiency”, approved by the Decree of the Government of the Russian Federation No. 600 dated June 17, 2015. In addition, they are singled out as one of the priority areas of scientific and technological progress in the energy sector in the direction “Heat Supply” in the Energy Strategy of Russia for the period up to 2035.

Fig. 1. The schematic diagram of a steam compression heat pump 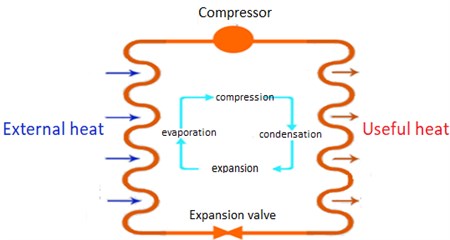 In an external heat exchanger (evaporator), thermal energy from the environment outside the building or from another available heat source is transferred to the working fluid of the HPU – a refrigerant with a low boiling point circulating through the internal circuit. The refrigerant is heated, evaporated and sent to the compressor. The compressor compresses the gaseous refrigerant, while its temperature increases. Further, the com-pressed refrigerant passes through an internal heat exchanger (condenser), in which, condensing, it gives off heat to the consumer system (direct heating of air, water or heat carrier of the heating system).

Then the refrigerant passes through a throttling valve that reduces pressure, which is accompanied by a decrease in temperature and final condensation of the gas-liquid medium, and the cycle repeats (Fig. 2). 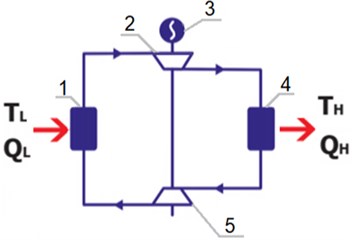 A heat pump or HP does not formally generate thermal energy, but it makes it possible to usefully use the low-temperature thermal energy of the soil, air, water, domestic wastewater, waste heat from industrial enterprises and much more. In general, the most promising low-potential sources for the central part of Russia are the heat of natural water sources.

The sources of low-potential heat can be: 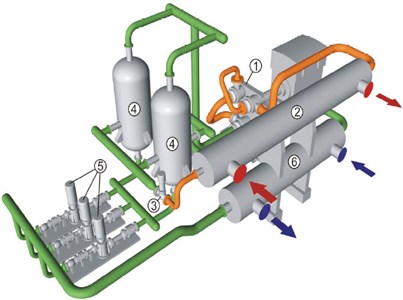 The most characteristic temperature level for an external heat exchanger in the mode of using a steam compression in a heat supply system from minus 5 °С to 15 °С, for the internal heat exchanger from 35 °С to 60 °С, which makes it possible to provide heating and hot water supply for most of the heating period. At the same time, if we take the received useful thermal power as 100 %, then the share of the consumed electricity will be 20-30 %. Thus, the energy efficiency coefficient, equal to the ratio of the received useful thermal power to the consumed electricity for the compressor drive, ranges from 3.3 to 4.

Table 1 [3] shows the comparative characteristics of the environmental efficiency of the heat pump unit at the temperature of the low-potential heat source 8°C and tradi-tional organic fuel boilers with a capacity of 1 Gcal / h and specific fuel consumption of 0.3 kg of fuel equivalent / kWh. The use of a heat pump reduces greenhouse gas emissions by 47 % from 1743 to 922.5 tons / year.

– thermal energy of the cooling system of electric motors.

According to the calculations made, the oil supply system of three operating pumping units NM 10000-210 emits 85 kW of low-potential energy into the environment through air cooling devices (ACD), the circulating water supply system for cooling STDP-6300 electric motors – 231 kW (table 2 [5]). Thus, during the operation of three main pumping units (MPU), the heat emitted into the atmosphere from the auxiliary systems is 85 + 231 = 316 kW.

Table 2. Technical data on the operation of air coolers of synchronous electric motors

It can be concluded that low-potential energy in the amount of 316 + 47 = = 363 kW is lost to the environment from one main pumping station and a wastewater treatment plant (Fig. 4).

Fig. 4. The amount of low-potential heat by type of source 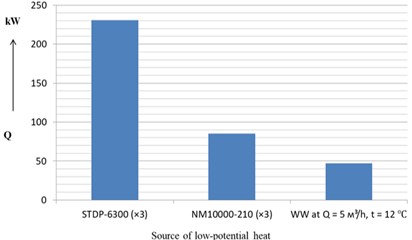 As an example, the heat consumption for maintaining a temperature of 25 °C for oil with a viscosity of 38 mm2/s in RVSP-20000 at an air temperature in the area where the tank is installed during storage is minus 35 °C is 73702 kCal/h or 86 kW.

Thus, low-potential energy, which is irretrievably lost in the environment from air cooling devices, the cooling systems of electric motors and the wastewater treatment plant, it is enough to maintain an oil temperature of 25 °C in winter in RVSP-20000 in the amount of / 363 / 86 = 4 pcs. at 100 % use of these secondary energy resources.

Fig. 5 shows a schematic diagram for the utilization of waste water heat using the heat pump.

The cost of heat pump units of ZAO “Energia” (Energia, CJSC) and their installation is approximately from $150 to $200 per 1 kW of thermal power, depending on the source of low-grade heat. The service life of heat pumps before capital repairs is 45,000-60,000 hours or 10-15 heating seasons, and the payback period doesn’t exceed 2–3 years [6].

Block-modular furnace rooms at the oil pumping stations of PAO “Transneft” (Transneft, PJSC) have a capacity of 4 to 10 MW, they include from 2 to 5 water-heating units (heating plant) UVT-2 manufactured by “Transneftemash”. The heating capacity of the NT-1000 heat pump is 1 MW, which is half the power of the UWT-2 boiler (2 MW). At the same time, the NT-1000 heat pump consumes 300 kW of electric power to drive a screw compressor, and the oil consumption during bo furnace room operation is 112 kg/h or 2.7 tons per day. 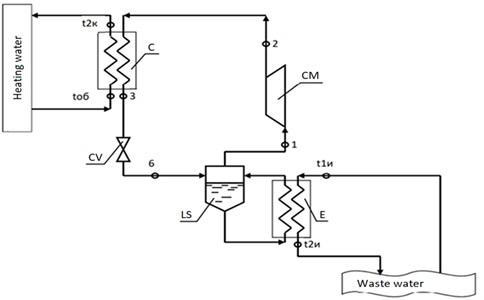 Fig. 6. The value of the payback period of the heat pump depending on the cost of a barrel of oil and the dollar exchange rate 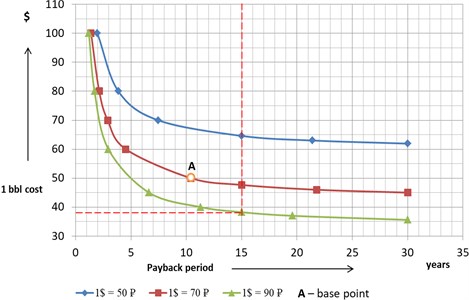 Thus, the payback period of the heat pump is 10,4 years with a service life before overhaul of 15 years and the total service life of the installation at the 30 years. The payback period of a heat pump is determined not only by the cost of one barrel of oil, but also by the exchange rate of the ruble to the dollar. During the calculations, it was found that the payback period takes values from 1.2 to 15 years at an optimal price of more than $ 38 per barrel of oil and is equal to 10.4 years at a rate of $ 1 = 70 rubles, the price per barrel is $ 50 (Fig. 6).

1) In general, a heat pump is a fairly environmentally friendly and economical device for utilizing low-potential secondary energy resources and reducing greenhouse gas emissions. The paper considers the possibility of using a heat pump at an oil pumping station, identified the sources and amount of low-grade heat, proposed methods for the beneficial use of this heat.

2) Oil supply systems for three pumping units and circulating water supply for electric motors, as well as a wastewater treatment plant, in total emit about 363 kW of low-grade energy.