Copyright © 2018 A. F. Ahmed Algarray, et al. This is an open access article distributed under the Creative Commons Attribution License, which permits unrestricted use, distribution, and reproduction in any medium, provided the original work is properly cited. 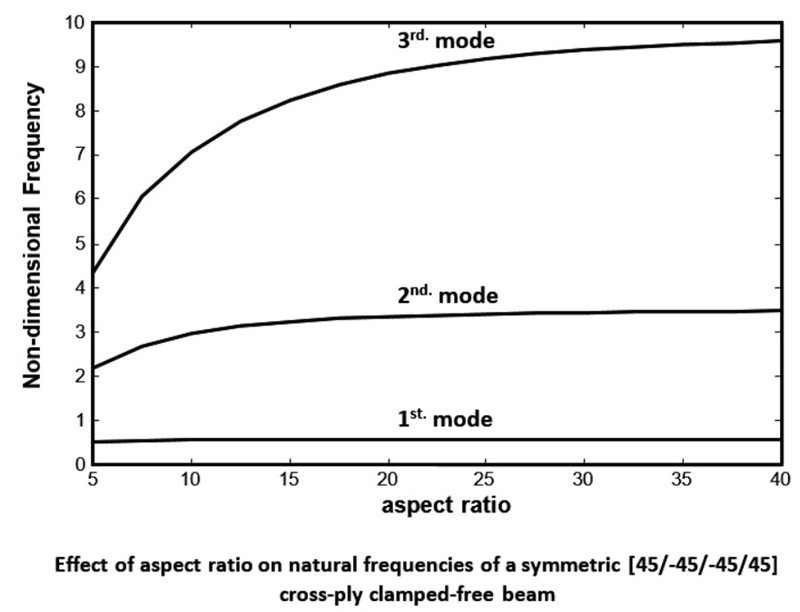 Composite have been used in engineering structures over the last four decades or so. They could be seen in a variety of applications as in craft wings and fuselage, satellites helicopter blades, wind turbines boats and vessels, tubes and tanks etc. Their advantages over traditional materials are widely recognized and these are high strength to weight ratio, and their properties which can tailored according to need. Other advantages include high stiffness, high fatigue and corrosion resistance, good friction characteristics, and ease of fabrication. They are made of fiber such as glass, carbon, boron, etc. embedded in matrix or suitable resin that act as binding material. The increasing use of composites has been required a good understanding of composite mechanics and their behavior. Many mathematical models for laminates subjected to static and dynamic loading have been developed. This paper addresses free vibration. The knowledge of the few lower natural frequencies of a structure is utmost importance in order to save it in service from being subjected to unnecessary large amplitude of motion which can cause immediate collapse or ultimate failure by fatigue.

Fig. 1. Showed a composite laminated beam made up of layers with different orientation, thickness, and properties. Where is the length, b is breadth and is depth. 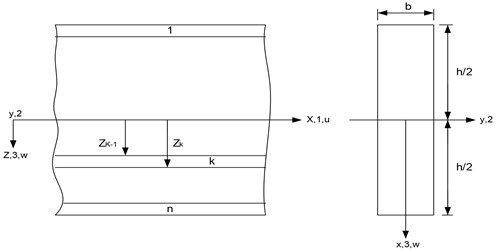 where and are the mid-plane longitudinal and lateral displacements, is the rotation of the deformed section about the -axis, is the perpendicular distance from mid-plane to the layer plane, and is time.

where: is the longitudinal strain, and is the through-thickness shear strain.

By employing 3-noded lineal element as shown in Fig. 2.

where , and the matrix containing the transformed elastic constants:

where is density and the dot denotes differentiation with time:

In the above derivation it is assumed the motion is harmonic and is circular frequency.

In the absence of damping and external nodal load, the total energy is:

The principle of minimum energy requires that:

The condition yields the equation of motion:

and is number of elements. To facilitate the solution of Eq. (10), we introduce the following quantities:

where is the shear correction factor.

The transformed elastic constants are:

And is the angle of orientation of the ply with respect to the beam axis:

Non-dimensional quantities used in the analysis are:

The mass matrix is 9×9 symmetrical matrix:

This observation can be seen in Fig. 3 to Fig. 5 for symmetric [45/–45/–45/45] angle-ply laminated beams. These figures show the variation of the non-dimensional frequencies with the aspect ratio range from 5 to 40 for the first three modes of vibration for all beams with immovable ends. It is obvious from the figure that the frequency increases rapidly for the range of aspect ratio from 5 to 20, and slows down beyond this range. When the aspect ratio is greater than 20, the beam is slender and consequently shear deformation and rotary inertia have small noticeable effects on the natural frequencies.

Table 2. The effect of aspect ratio in non-dimensional frequencies for symmetric [45/–45/–45/45] angle-ply beams

3.2. Effect of axial movements of the ends 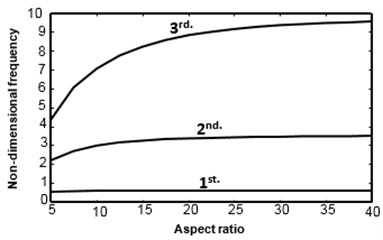 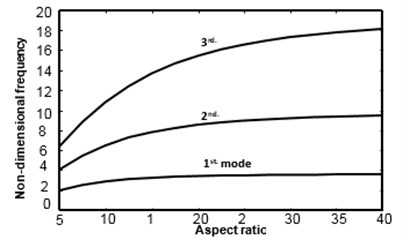 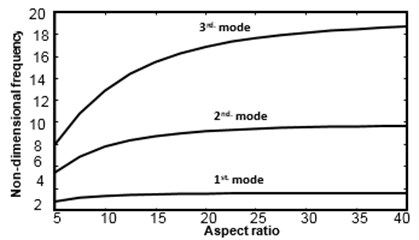 The natural frequencies results which obtained by this study are closer with Abramovich [12] results, as show in Table 4, and difference between two results less than 0.6 % for cantilever and clamp-clamp beams.

A third-order shear deformation theory was used by Kant et al. [13] in the analysis of the free vibration of composite and sandwich simply supported beams. Two comparisons of non-dimensional natural frequencies between the present method (using FSDT) and the results of this reference are presented in Table 5, which presented a comparison for symmetric [0/90/90/0] cross-ply laminated beams respectively, with aspect ratio of ( 5), where the shear effect is significant. The comparison shows a difference of less than 3.3 % associated with the fundamental frequency and less than 4.5 % for higher modes. These differences are due to the employment of different shear theories as stated bellow.

It is clear, from the above comparisons, that the differences are very small even for higher modes. This confirms the accuracy of the method of analysis and the computer program.