Copyright © 2019 Weipeng Gao, et al. This is an open access article distributed under the Creative Commons Attribution License, which permits unrestricted use, distribution, and reproduction in any medium, provided the original work is properly cited.

At present, the urgent problem to be solved is the nonlinear compensation for the active vibration absorber [9, 10]. The regular control method is the linear approach algorithm that highly depends on the accurate model of the absorber. However, the accurate model is difficult to be identified, which will result in the negative impact on control, because the non-linear effect cannot be compensated completely in the actual control system [11-14]. Many related researches had been carried out before. The semi-active series TMD (Tuned Mass Damper) implemented by Prof. Lei Zuo in Virginia Tech, through replacing the viscous damping element between the two auxiliary masses with an electromagnetic transducer [15]. The electromagnetic shunt damping vibration isolators (EMSD-VLs) were designed for the first-order and third-order vibration, by Dr. Bo Yan, Zhejiang Sci-Tech University [16]. The influence between Tuned mass absorbers and damped structures et al. [17].

Electromagnetic active vibration absorber is a typical active inertial actuator, the structure is as shown in Fig. 1.

In the mechanical structure, electromagnetic actuators are used to change the output force, including passive device consisted of springs, weights and actuating elements [15]. The coil is used as stator and the soft iron with permanent magnets on the upper and lower end is used as mover that clearance fit with middle pillar. The spring is multifunctional part in the absorber. First, it can provide sufficient axial elasticity for the mover of vibration absorber; second it can ensure sufficient radial stiffness when the mover is reciprocating. The resonant frequency of the electromagnetic actuator is determined by the weight of counterweight and the mover mass of actuating element [16], which in turn makes influence on the peak output and operating frequency of electromagnetic actuator. 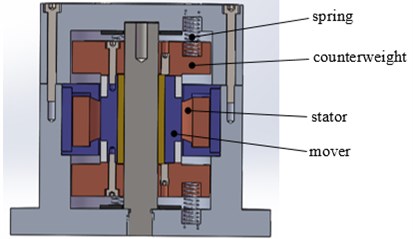 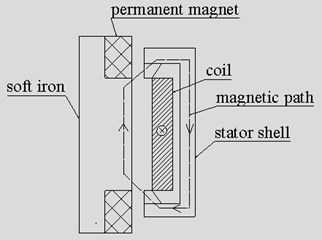 Model of magnetic circuit is as shown in Fig. 2.

In the model of magnetic circuit, the magnetic potential of upper permanent magnet increases, but decreases in the end permanent magnet. Thus. the soft iron will be in upward force on the support column along the vertical direction, the force in horizontal is canceled by each other. The meanings and symbols of related parameters are shown in Table 1. 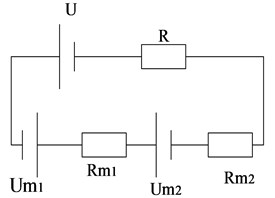 The electromagnetic force on iron core is:

3.1. Influence of identification error on control

The error signal will be influenced by secondary path, which in turn affects the convergence criterion. The adjustment of control vector according to control algorithm may not be in the steepest direction of the gradient. The adaptive control process is affected or even failed. So, the accurate identification model is the basis of control. Parameter identification is essential to get the transfer function of secondary path. Considered by the vibration absorption platform and good performance of actuator’s output force, the transversal filter is acted as identification model. The transfer function of secondary path is approached by updating the weight coefficients of identification filter.

There is always be the identification error between the estimated model and the actual transfer function . S. Snyder and C. Hansen found that when the reference signal is sinusoidal signal, the LMS (Least Mean Square) algorithm converges with a sufficiently small step size, so long as the phase difference between the secondary path identification model and actual transfer function is not more than 90 degrees. The following is the analysis of identification error from the control effect, stability of algorithm and convergence.

The objective function can be expressed as [19]:

The optimal coefficients of adaptive control filter can be calculated as follows, substituted into objective function to get the minimum value:

The optimal coefficients are substituted into objective function, the minimum value is:

where is positive definite quadratic matrix, so 0. It shows that the total power of error signal after convergence is lower than that of desired signal.

The new optimal coefficients are substituted into objective function and the minimum value of it is:

In the Eq. (9), if the identification error is big, it can be inferred that even if the algorithm converges, the total power of error signal may still be higher than that of desired signal. The control fail.

Because of the identification error, the convergence step of LMS algorithm is as follows:

The vibration absorption platform is the research object in this paper. The characteristic frequency of platform is not changed greatly, and the output force of absorber is nearly linear, so transversal filter is selected as the estimation model to approach the actual transfer function of secondary path. The transversal filter is a finite impulse response filter, which does not need feedback and past related output. It is non-recursive and commonly used. The nest is the design of identification algorithm, which is expected to improve the identification accuracy as much as possible and reduce the influence of identification error on control system.

The frequently-used normalized variable step algorithm is as follows:

where, is initial step, is the tiny positive, which prevents the system diverging. Because the denominator may become zero without the tiny positive. While, the influence of identification error on algorithm is not reflected in Eq. (12). So, a new improved variable step identification algorithm is proposed in this paper. Combined with the above requirements, the change mechanism is changed as:

The force diagram of vibration absorption platform is as shown in Fig. 5. 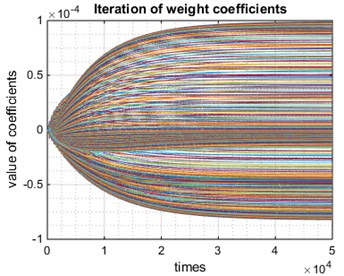 a) Identification with normalized variable step 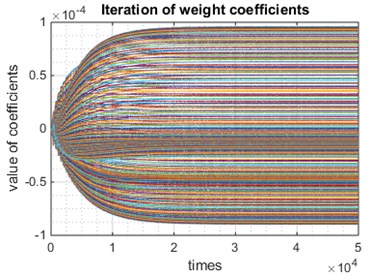 b) Identification with improved algorithm

In Fig. 6, the convergence speed with improved algorithm is faster than that with normalized variable step. It is shown that the improved variable step algorithm could be well applied in the identification of secondary path.

where the single weight coefficients .

The output matrix of controllers is:

The output of a single controller at a certain moment work as , and each output signal is in the form of vector, in other word .

acted as transfer function matrix of secondary path, its dimension is :

where represents the transfer function from the control signal to the error sensor. Then the error signal is supposed to be:

The objective function here can be expressed as:

According to convergence rule, calculate the gradient-descent direction:

The weight coefficients of multi-channel controller update as follow formula:

In the Eq. (11), is the result of filtering where the reference signals are filtrated by secondary path matrix, the details are as follows:

The estimation model of secondary path can be expressed as:

Estimation model matrix must be put into respective channel for the realization of algorithm, so the estimation model of each channel can be expressed as follows:

In this article, electromagnetic active vibration absorber is designed, simulated and experimental analyzed. Specific implementation method is included. The force sensors are used to collect vibration signals, the excitation current with different frequency and amplitude. The output force can be calculated according to the signals. The main experimental equipment are as follows in Fig. 8.

The frequency of exciting current is respectively 30 Hz, 80 Hz, 100 Hz, 150 Hz and 200 Hz. Variable control method is applied in the experiment. The current is limited in some certain frequency, then change the amplitude to get the output force. The details are given in Fig. 9. 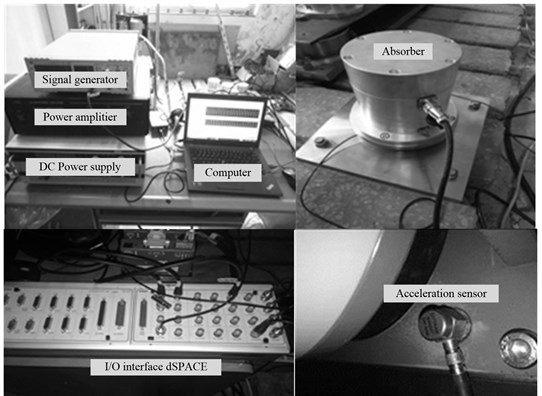 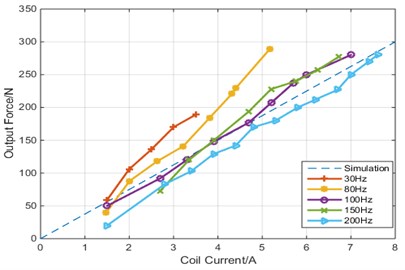 The experiment bench and installation of vibration absorbers are as shown in Fig. 10.

Error vibration signals before and after control collected by error sensors are shown in Fig. 12.

In Fig. 12, the absorption effect is not obvious when the 1 and 2 passive vibration absorbers are used in control system, because the excitation frequency is far from resonant frequency. While the 3 and 4 electromagnetic active vibration absorbers are totally different, the absorption effect is obvious. The output force can be changed to the excitation signal adaptively, ignoring the difference between excitation frequency and resonant frequency. The details of damping effect are as shown in Table 2. 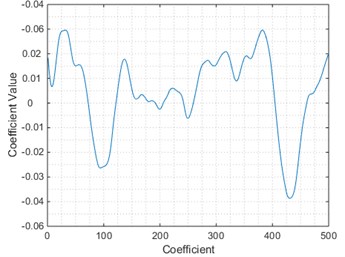 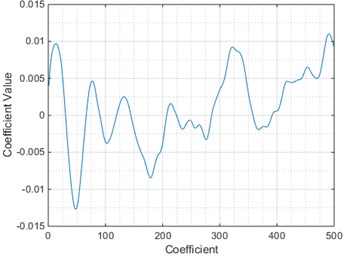 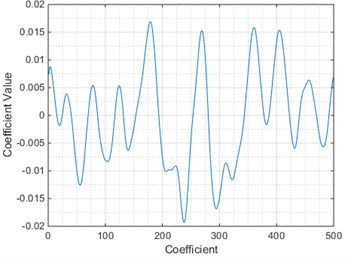 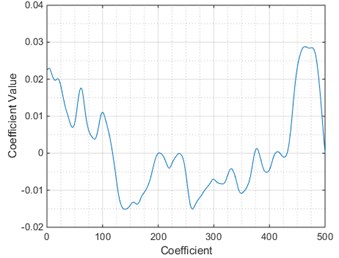 Fig. 12. Error signals and spectrum before and after control 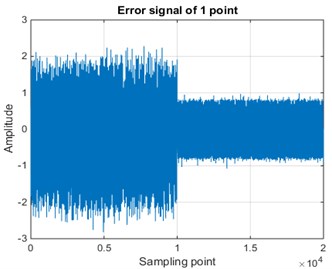 a) Error signal of 1 point 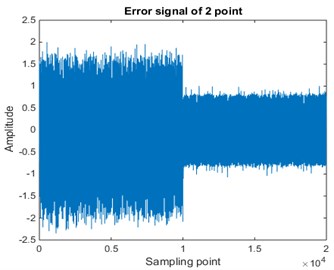 b) Error signal of 2 point 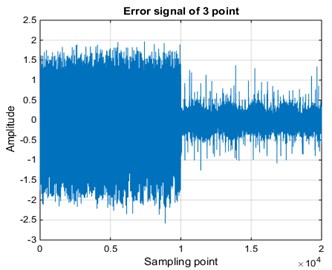 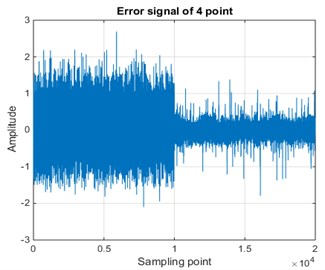 The phase-space reconstruction is used in the analysis of error vibration signals, the attractor has obviously changed after control, as shown in Fig. 13. The change of attractor indicates the validity of multi-channel control algorithm, and also indicates the error influence of nonlinear in the multi-channel control system. because the attractor does not have the characteristics of limit cycle. So, in the nest optimization algorithms, the nonlinear influence needs to be further compensated.

Fig. 13. Phase-space reconstruction of error signals before and after control 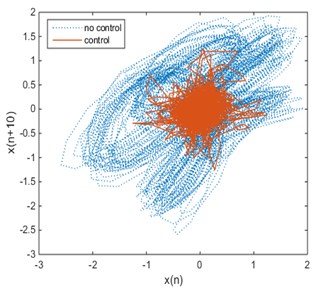 a) Phase-space reconstruction of 3 error signal 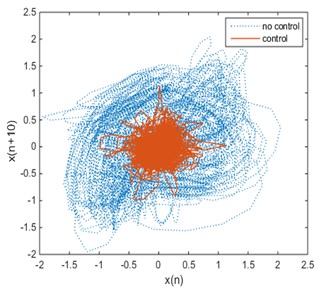 b) Phase-space reconstruction of 4 error signal

1) The electromagnetic active vibration absorber designed in this article can provide electromagnetic force in both directions through the electromagnets in upper and lower of soft iron, without applying the bias current. The relationship between input current and output force can be approximately linear. The nonlinear influence on control is reduced significantly.

2) In the distributed multi-channel adaptive control algorithm system, the first step is to identify the secondary path. And then, coupling between channels can be compensated on each control loop through matrix approximation. Each control loop can be seemed as basically independent. This algorithm improves the stability of control system and reduces the calculation at the same time.

The attractor of phase-space reconstruction indicates the error influence of nonlinear in the control system, because the attractor does not have the characteristics of limit cycle. So, in the optimization algorithm, the nonlinear influence needs to be further compensated.

1) The magnetic circuit structure of electromagnetic active vibration absorber can be further optimized to reduce the nonlinear influence.

2) Application of Neural network in identification of secondary path can reduce the nonlinear error between simulation model and actual transfer function.

3) The output of electromagnetic absorbers may make great influence on the collection of reference signal, this need to be considered in the actual control system.

The research leading to these results has received funding from the National Natural Science foundation of China (NSFC) under the grants No. 51579242, No. 51509253 and No. 51679245. All the supports mentioned above are gratefully acknowledged.